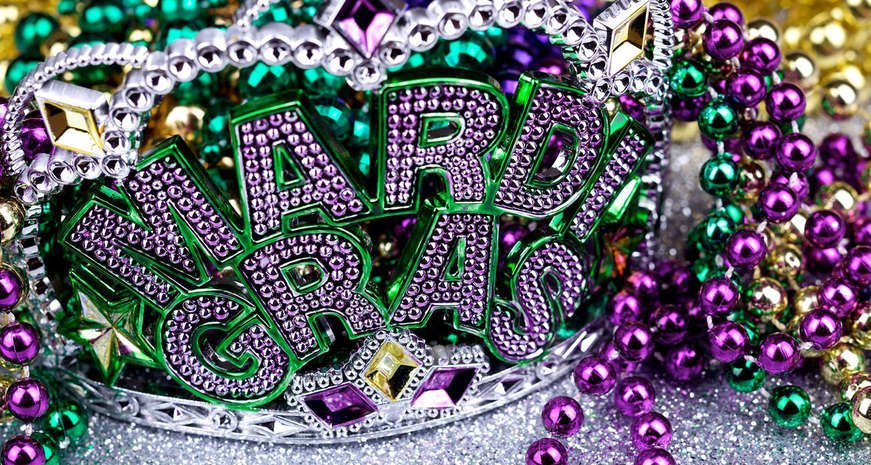 During Carnival season, over a million people head to New Orleans to celebrate and collect as many beads as they can. But we know not everyone can make it to the Big Easy for the festivities. Luckily, Mardi Gras celebrations extend throughout the South. These 11 other Southern cities have their own extravagant Fat Tuesday celebrations that are worth checking out. 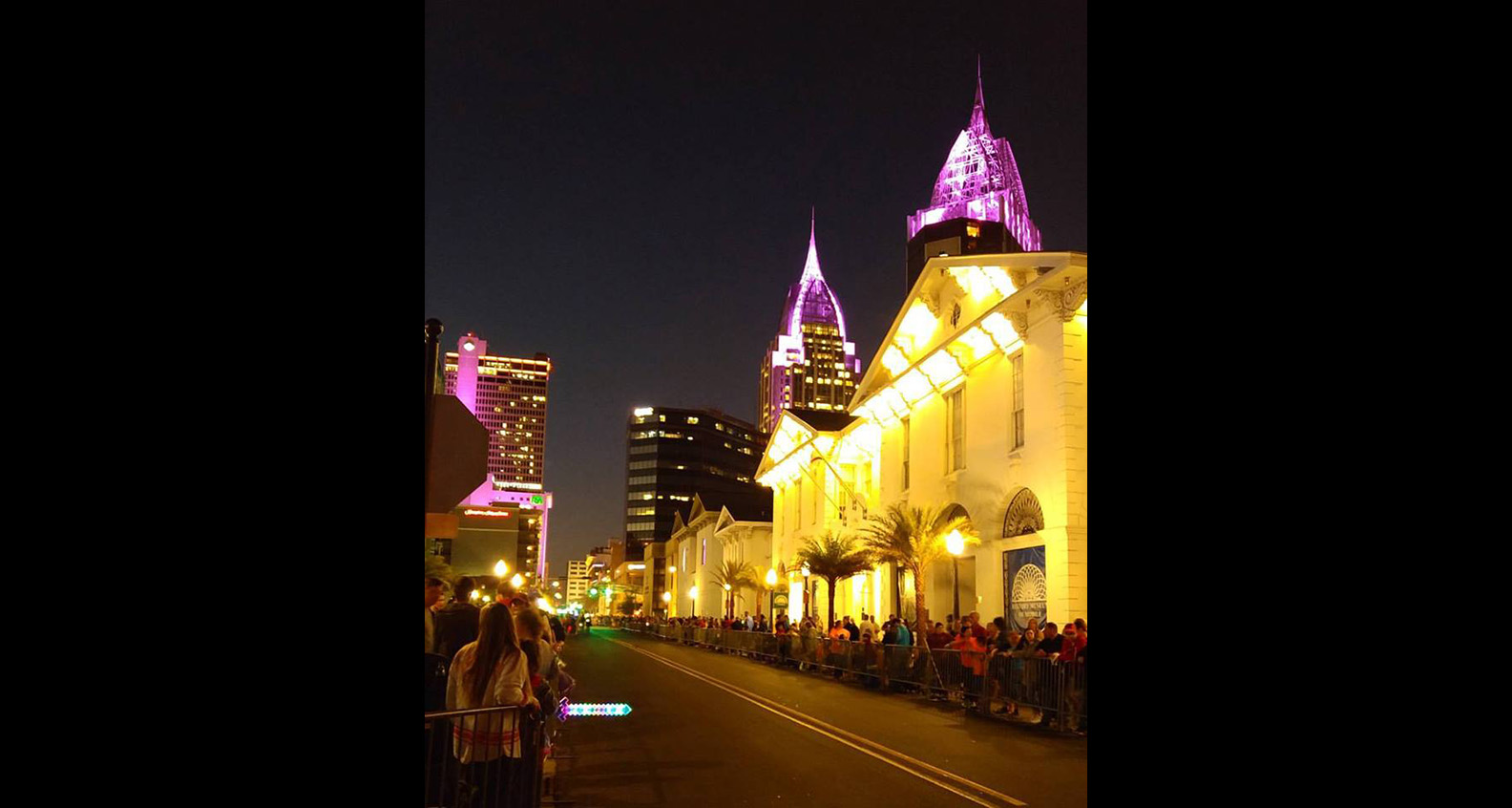 Mardi Gras in Mobile is a tradition that dates back to 1703, when the first Carnival celebration took place in the United States. Today, Mobile's parties rival those in nearby New Orleans, with close to 1 million spectators and almost as many beads and Krewe parades thrown throughout the two-week-long festitvities. Even better? There are moon pies. 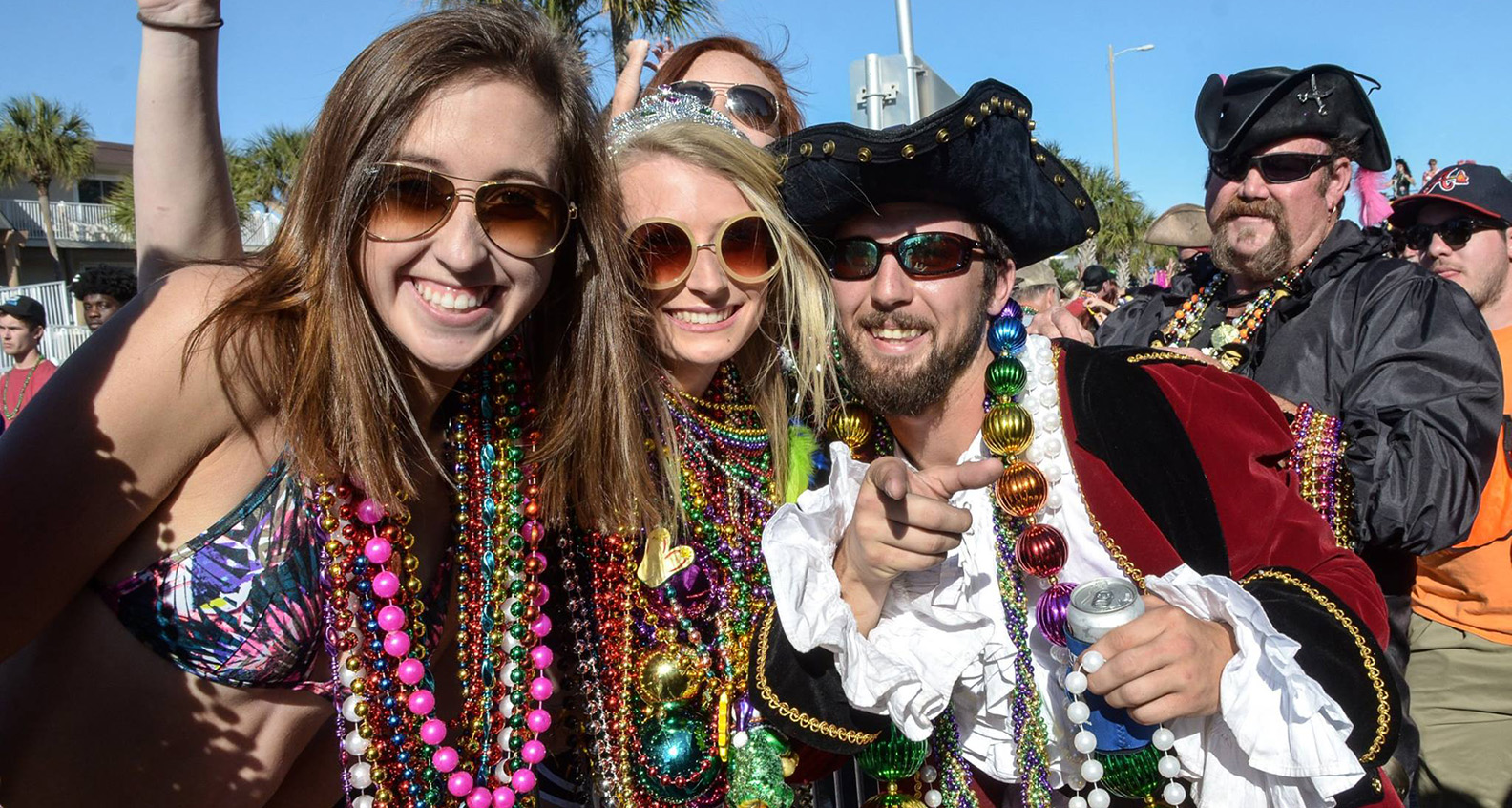 More than 100,000 people come out to celebrate during the Mardi Gras celebrations in downtown Pensacola. Krewe parades take place throughout the weekend before Fat Tuesday, but the main attraction is the Grand Mardi Gras parade, which boasts over 6,000 participants. Along with beads and coins, they’ve adapted Mobile’s tradition of throwing MoonPies to spectators along the parade route. 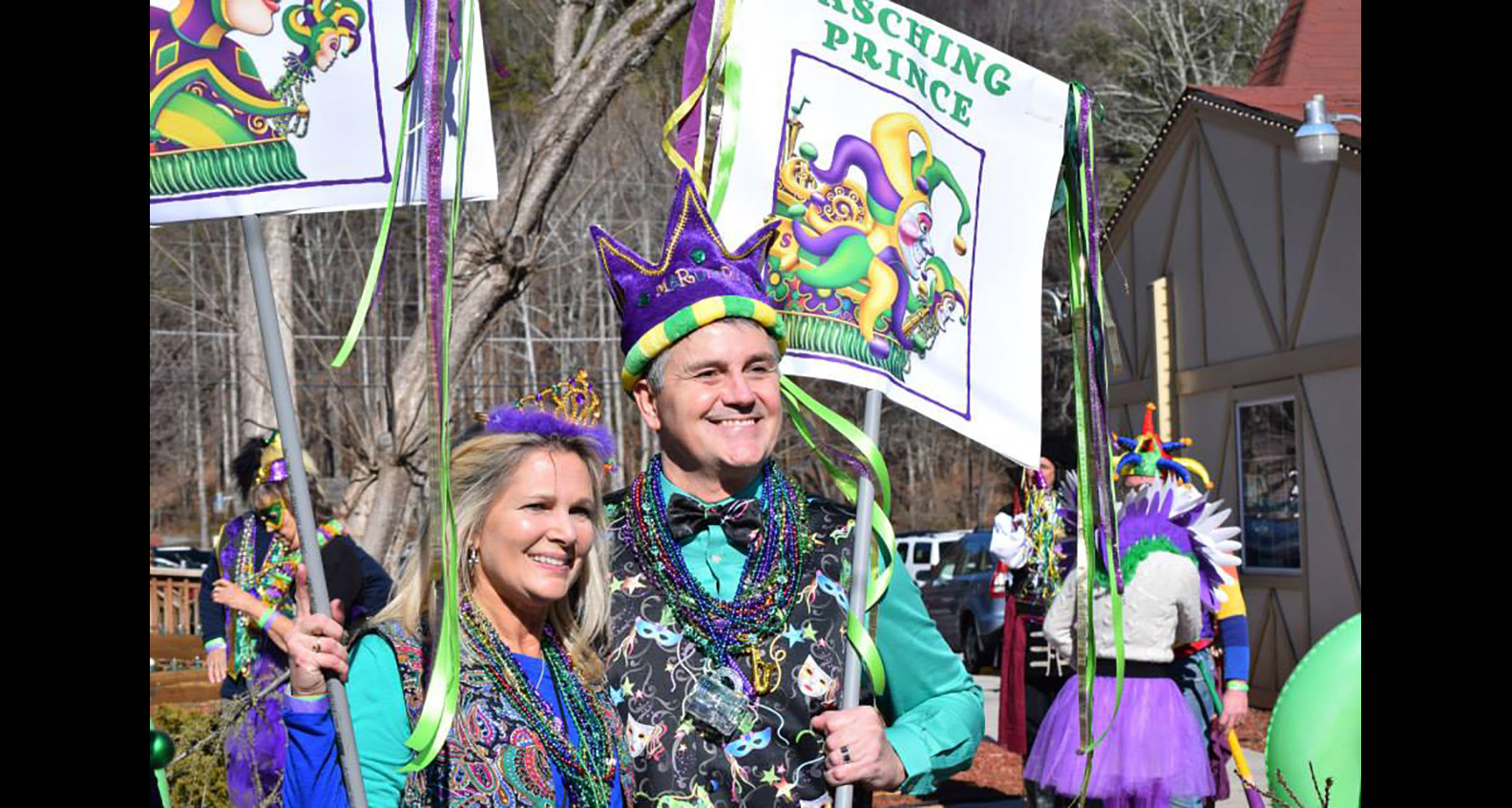 Instead of celebrating New Orleans-style, this small town in Northern Georgia will be celebrating Fasching, a German-style Mardi Gras. Helen's Bavarian winter Karnival includes indulgent German food, live German music and German dancing. There will be a costume contest, so make sure to wear as much purple, green and gold as possible. 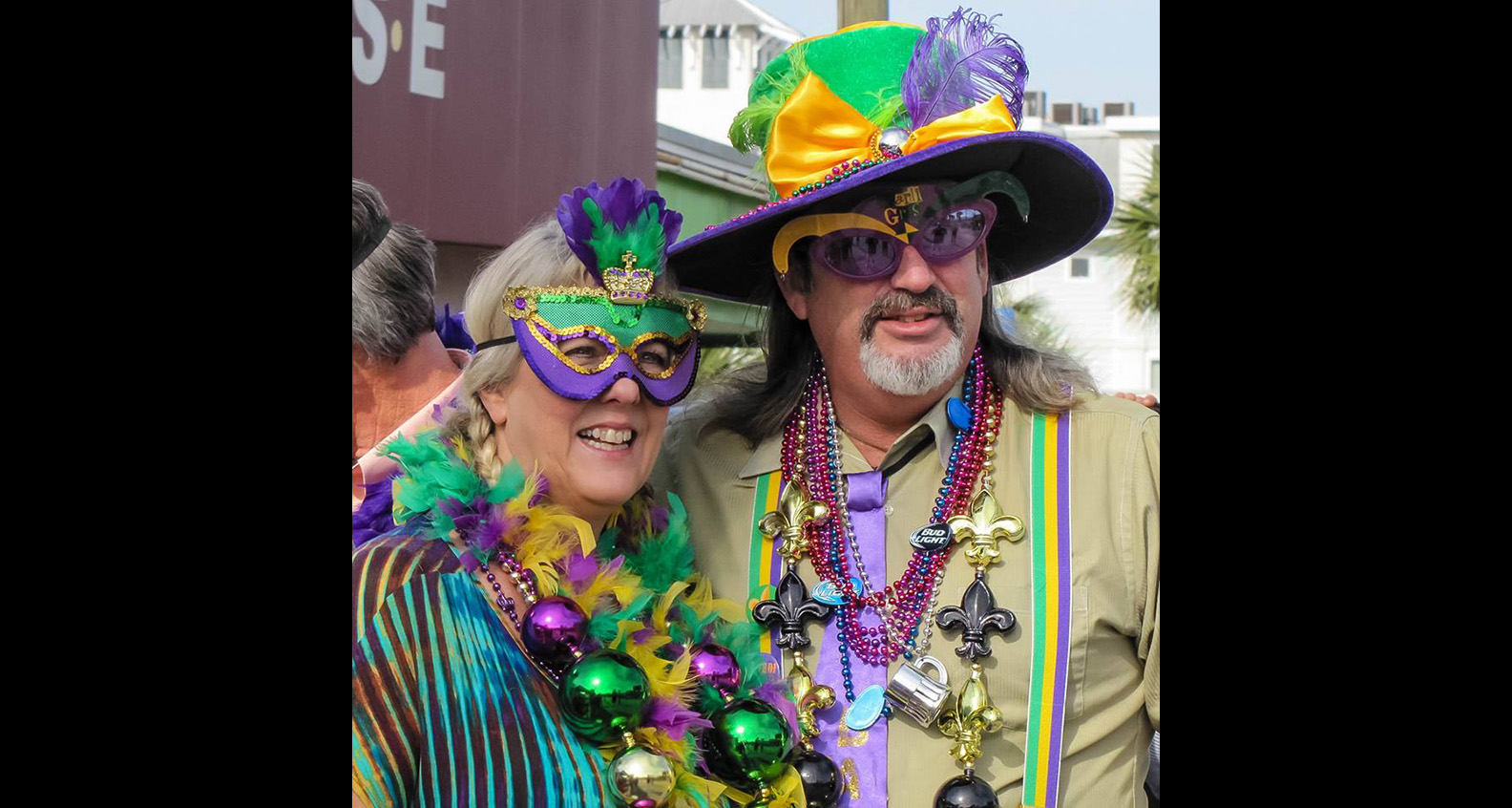 Tybee Island will be celebrating its 10th annual Mardi Gras celebration this year. During the festivities, the entire town comes alive with colorful costumes, masks and a parade that runs down Butler Avenue. Revelers have the chance to catch beads, coins and toys while watching the parade. The festivities continue into the evening with the Tybee Mardi Gras Street Party, where the winners of the costume contest will be crowned. Along with winners in the pets and Krewe categories, the winners of Tybee Mardi Gras Prince, Princess, King and Queen will be announced, too. 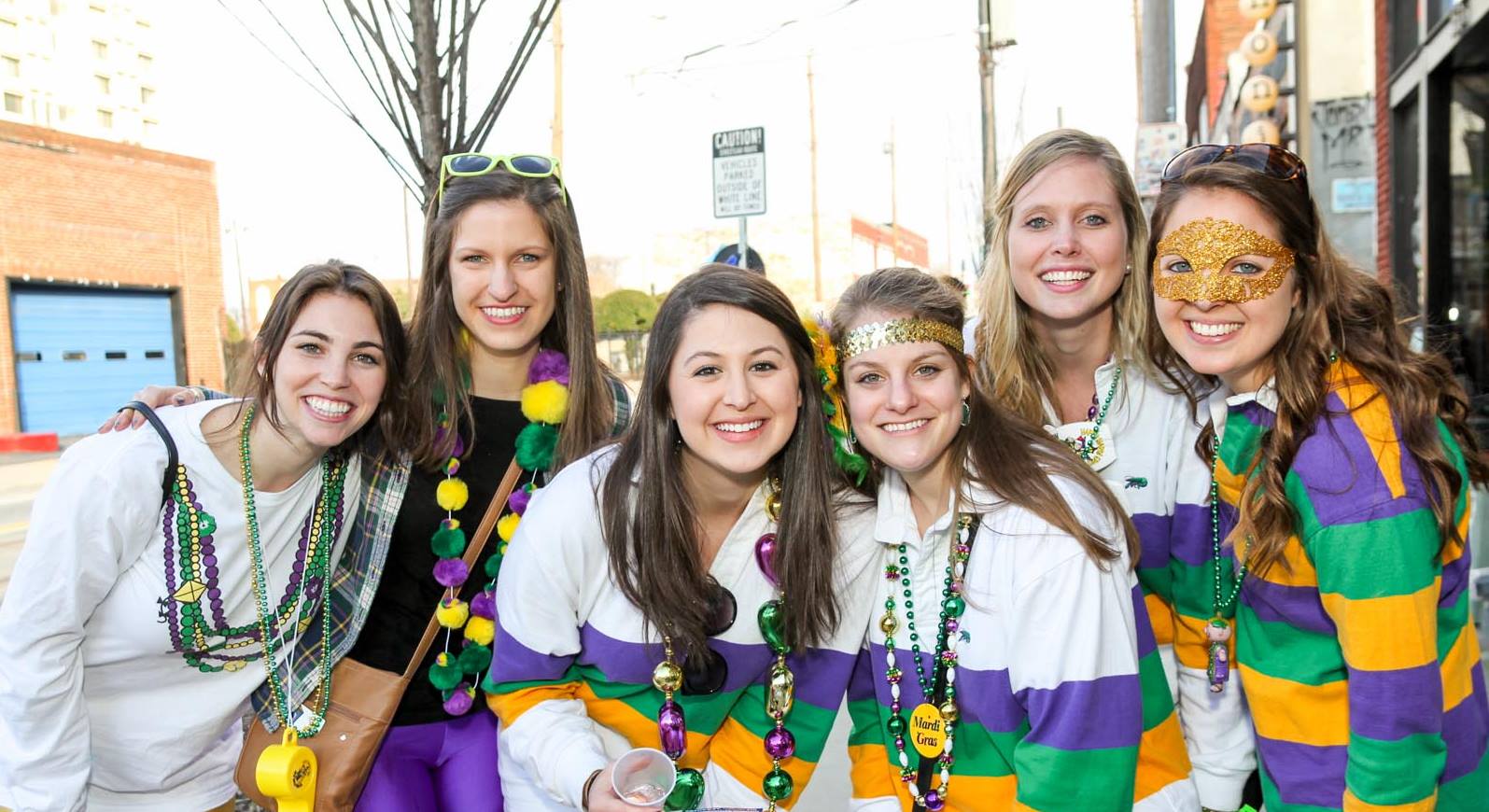 Take a tour of downtown Atlanta on the Atlanta Streetcar while enjoying Mardi Gras festivities at 35 different restaurants and bars. Make sure to dress up to get free perks, such as shots and Mardi Gras beads. Some of the stops along the way include Max’s Coal Oven Pizzeria, Old 4th Distillery and Sweet Auburn Curb Market. 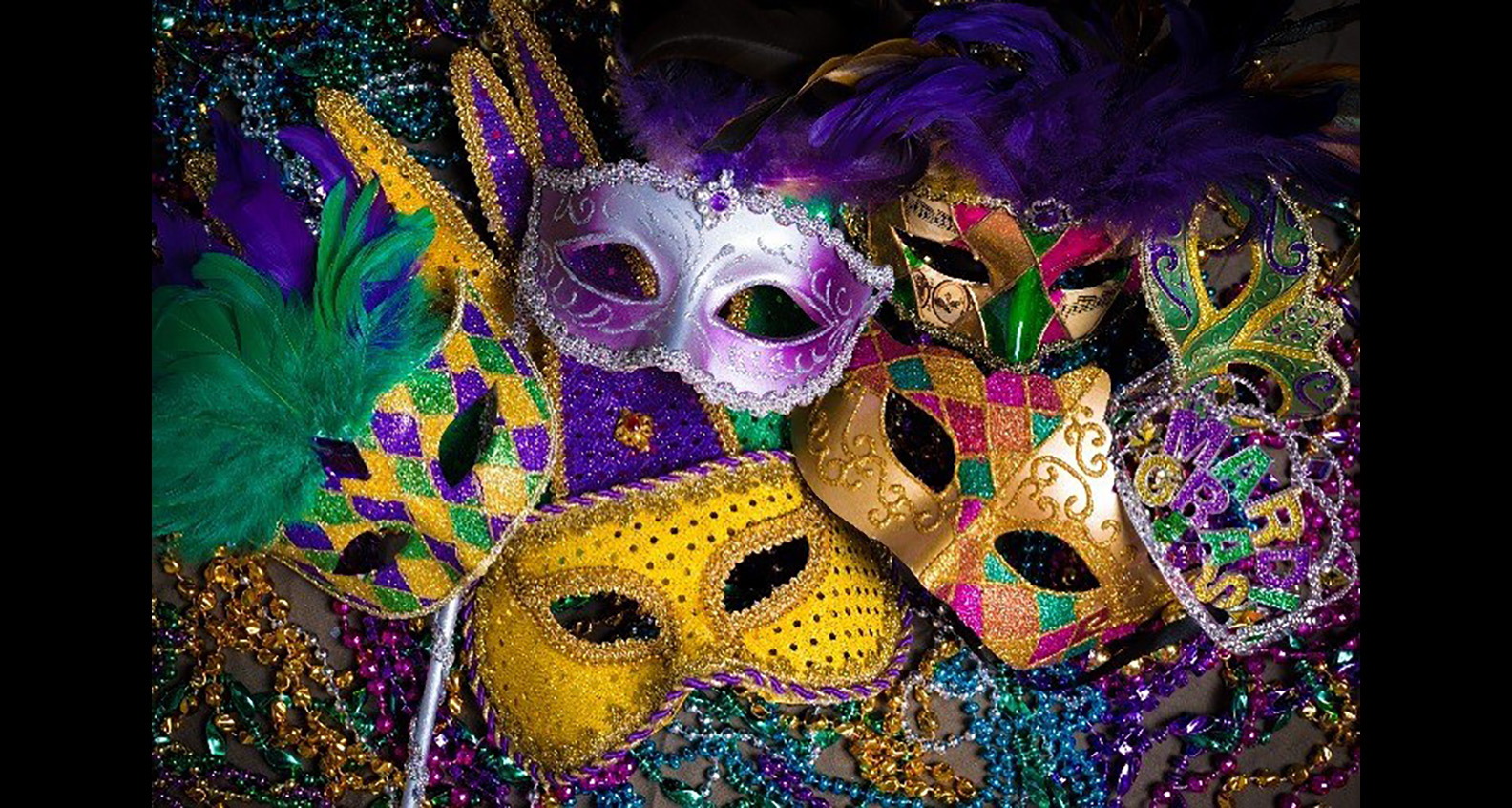 Since 1908, the Gulf Coast Carnival Association has been throwing a Biloxi Mardi Gras celebration to remember. That first parade began with only 17 floats and 50 flambeau carriers, but today, more than 450,000 people head to the this city on the Gulf Coast for to see over 20 different parades. 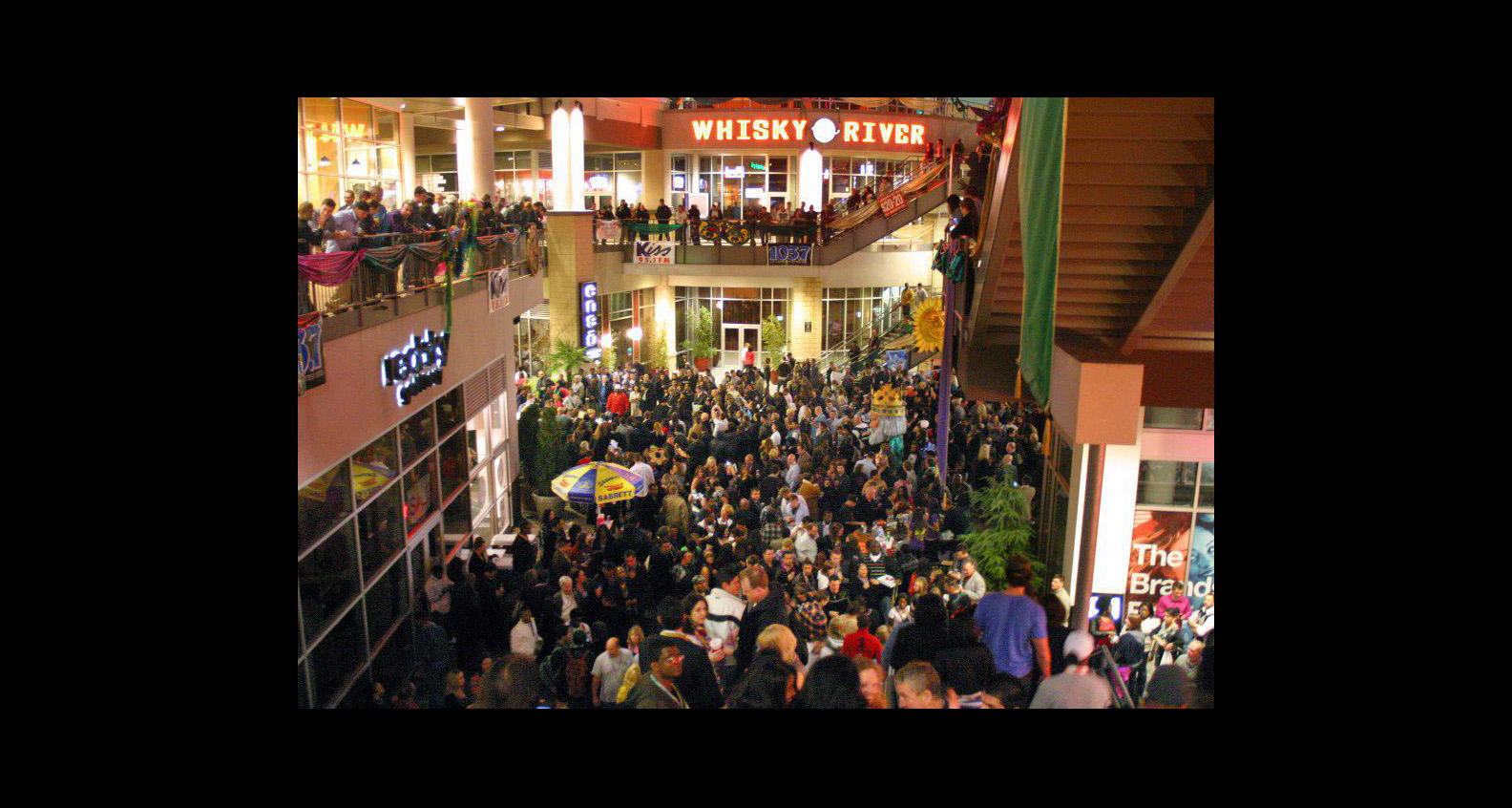 Although it’s located in downtown Charlotte, you’ll feel like you’re on Bourbon street if you celebrate Mardi Gras at the Epicenter. The shopping and restaurant center is throwing a big party with plenty of beads to go around. Local marching bands will act as Krewes and will put on a Mardi Gras parade, while street performers provide even more live entertainment throughout the night. 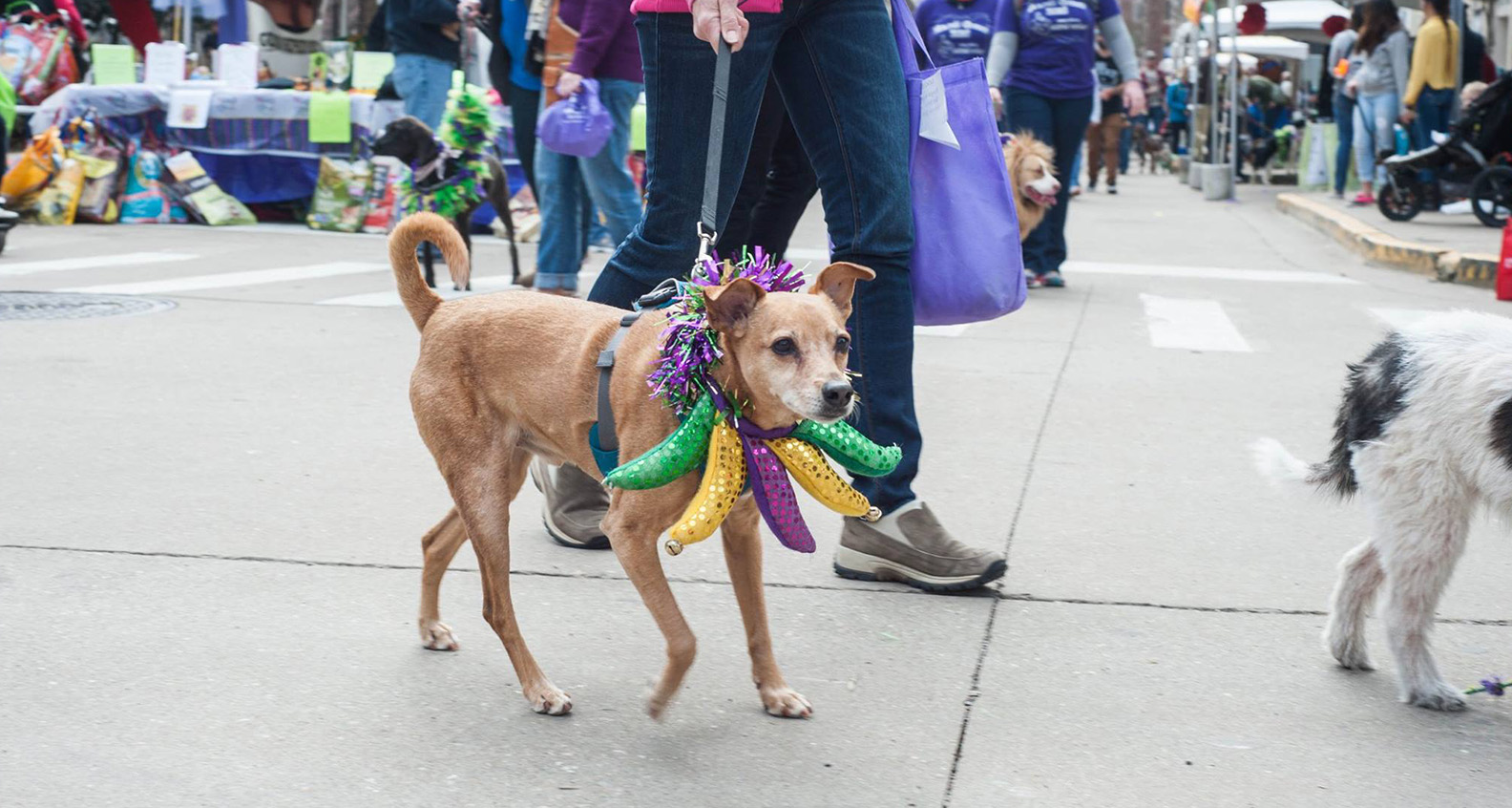 Knoxville doesn’t have an official Krewe-filled Carnival parade, but it does have a Mardi Growl Parade to help you celebrate Fat Tuesday with your furry friends. For the past 11 years, the streets of downtown Knoxville fill with dogs dressed in their Mardi Gras best. Along with showing off adorable pups, the parade acts as the Young-Williams Animal Center's largest fundraiser, which helps support more than 10,000 animals in the area. 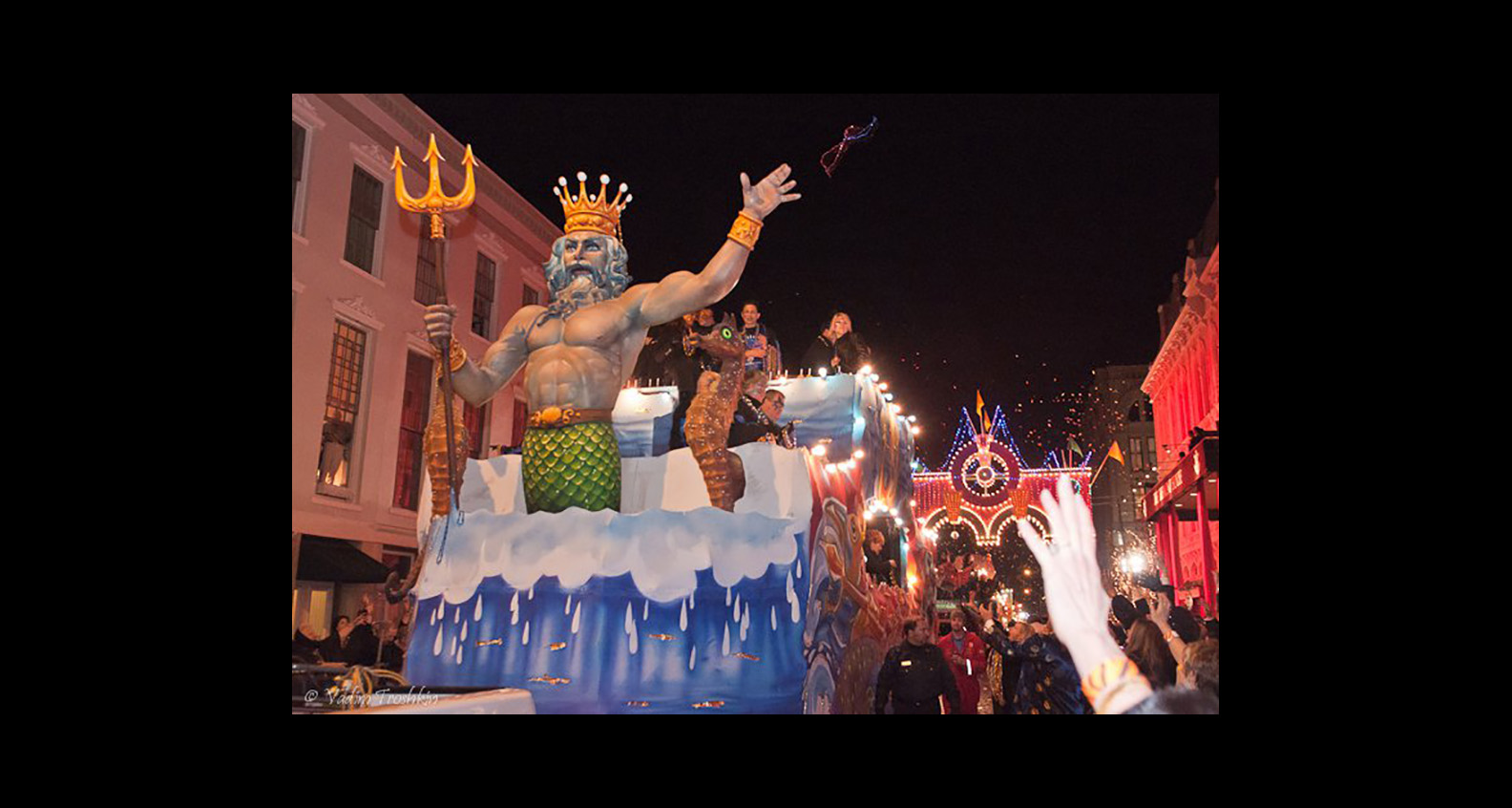 The two weeks leading up to Mardi Gras in Galveston are filled with live entertainment, great food and extravagant parades. This year more than 300,000 people are expected to flock to Galveston’s historic downtown district for the festivities. Non-stop Krewe parades fill the weekend leading up the big day, and later, at the Bud Light stage, over 30 different concerts will continue the celebrations late into the evening. 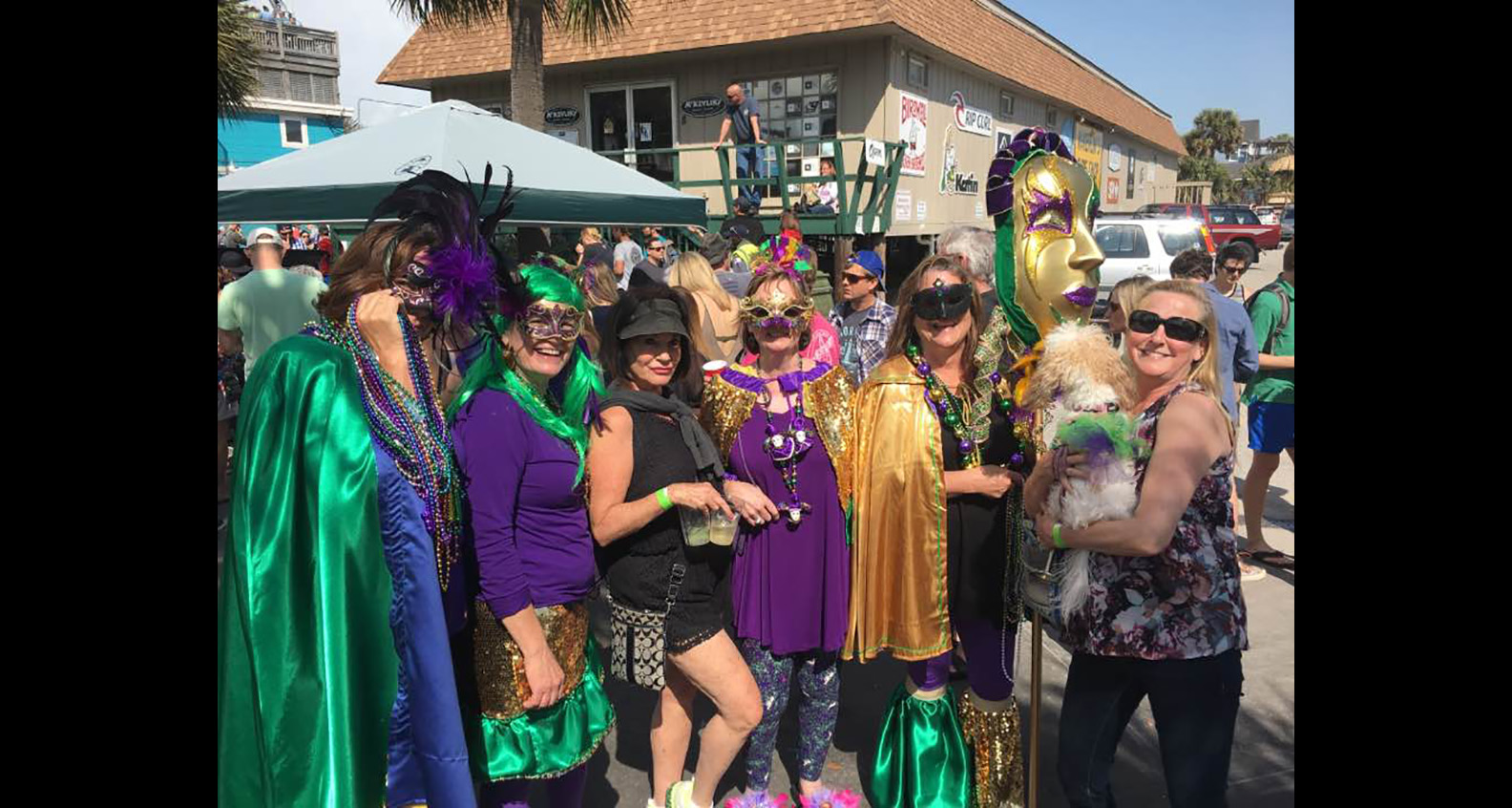 This South Carolina beach town knows how to throw a Mardi Gras celebration with a South Carolina twist. Along with a lively parade, the whole town comes alive with a street festival that draws people from all across the Low Country. Restaurants throughout Folly Beach will be creating New Orleans-style dishes, and live music from Soulfish and the Eddie Bush Band will be playing throughout the day on the West Huron Avenue stage. 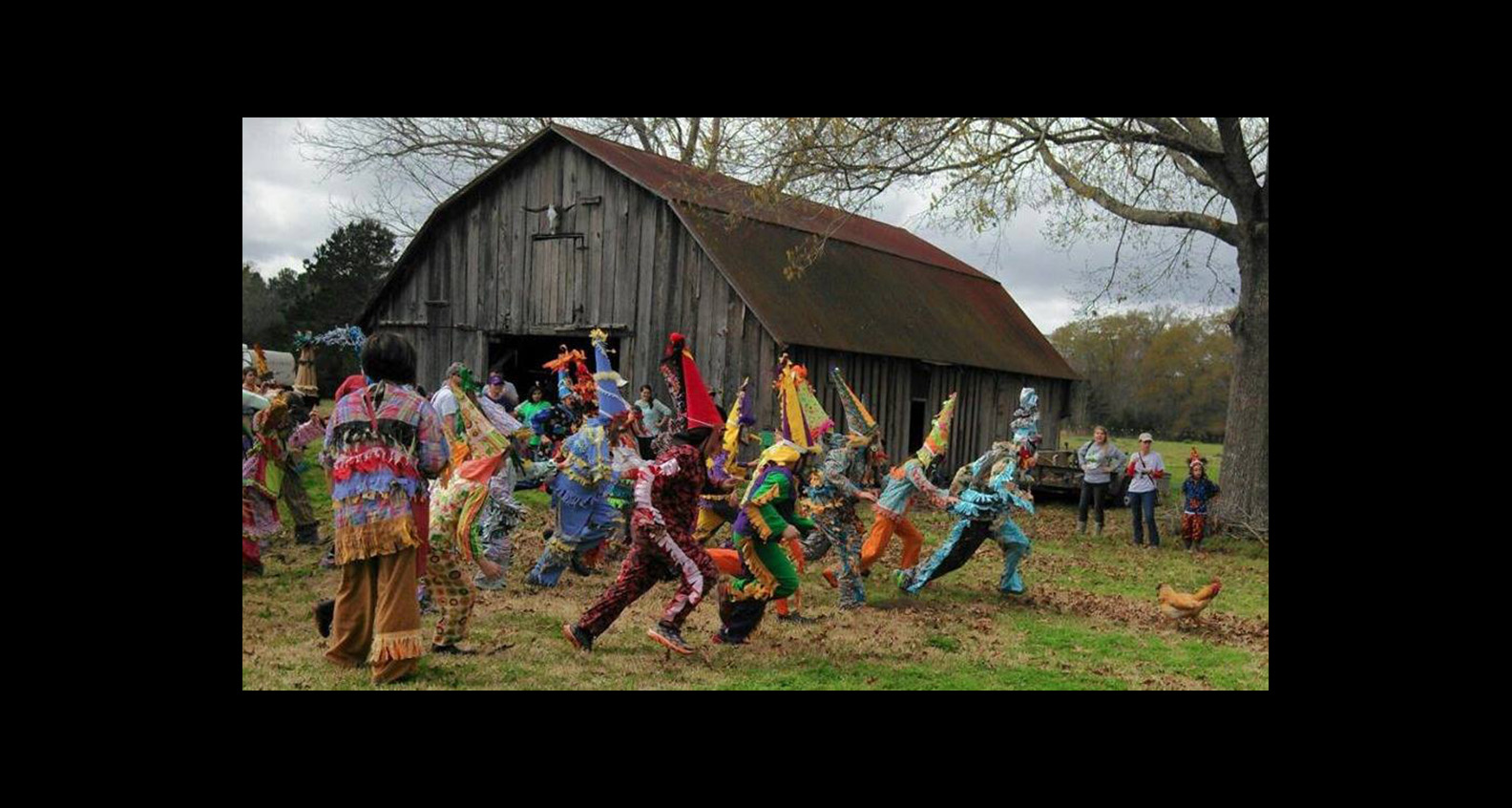 For Cajun country, Mardi Gras means chicken runs, parades and gumbo cookoffs. Krewe parades take place throughout the weekend leading up to Mardi Gras, culminating in giant Fat Tuesday celebrations in downtown Lake Charles and Lafayette. Our furry friends can also get in on the Mardi Gras fun with a parade of their own. The Mystical Krewe of Barkus will be hosting a dog parade at the Lake Charles Civic Center this Saturday.