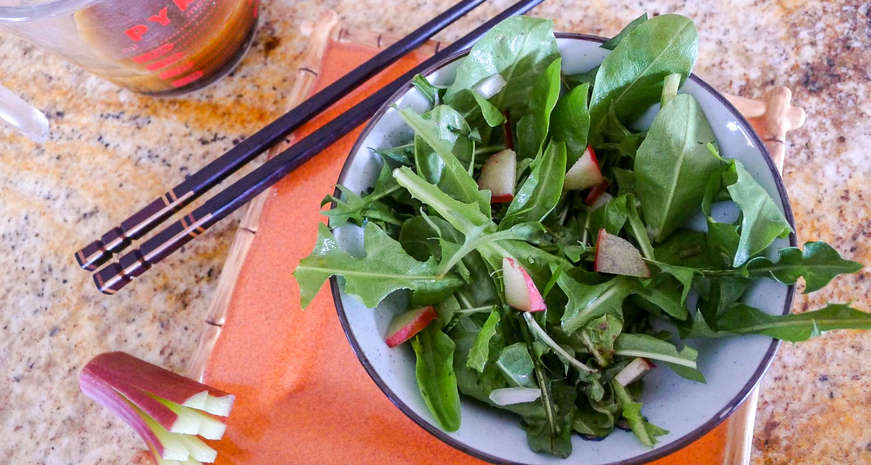 During the heyday of the Silk Road, dried rhubarb root was at times more expensive than cinnamon or opium, and Marco Polo went searching in northwest China for specimens that could thrive in Europe. A powerful laxative, rhubarb was a medicine long before it was a food.

Half a century after Polo, the Spanish ambassador to what's now Uzbekistan placed rhubarb in the most esteemed of company. His 1405 report to King Henry III notes, "The best of all merchandise coming to Samarkand was from China: especially silks, satins, musk, rubies, diamonds, pearls and rhubarb."

Perhaps the ambassador's appreciation for rhubarb was rooted in some digestive ailment. At the very least, we know he was probably not making pie. It wasn't until the 1800s, when the price of sugar began to drop, that Europeans began eating rhubarb stems (the leaves are poisonous) as a food.

Since then, the sour flavor of rhubarb has been countered with sugar, and perhaps other fruit. To this day, rhubarb sometimes goes by the name "pieplant," and remains synonymous with dessert. If you can name a rhubarb dish that contains less than a cup of sugar, you are a statistical anomaly. But there is no reason why it can't be used in all kinds of savory dishes, in place of other acidic ingredients like vinegar, tamarind or lime juice; whenever you need a touch of tang.

How to use rhubarb
I've made hummus by simmering the garbanzo beans with rhubarb, and skipping the lemon juice, and ended up with the best batch I've ever made. Nutty and creamy, it made the control batch taste overly lemony in a side-by-side comparison. I've prepared yellow curry with coconut, spinach and choice of proteins, with floating chunks of freshly sliced rhubarb giving a sour, exotic flavor to the curry.

This time of year, when the rhubarb is still young, we have the opportunity to enjoy it raw and unsweetened, a serving suggestion that's obvious yet rarely employed. Eating raw rhubarb is an intimidating proposition. It's a strong flavor. And if it were any in other salad it might not work.

The rhubarb plant awakens from the ground like a giant toadstool in early spring, its broad, poisonous leaves unfurling to shade the red, tender stems beneath. This early emergence, along with its laxative properties, made rhubarb a popular ingredient in many recipes for "spring tonic," a folksy cocktail of early season shoots and roots, either made as a tea or chomped down. People consumed spring tonic to recharge their bodies with vitamins and fiber after a winter's worth of starch and cabin fever.

As the rhubarb awakens, the dandelions also emerge. These two unrelated plants are kindred spirits, both able to survive like outlaws in the shadows of human settlements, growing where they can. And each has its own outsized flavor. A dandelion is at the far edge of the bitter spectrum, while rhubarb is at the extreme end of sour. Eaten together in my salad, the bitter dandelion never tasted so mild-mannered. The mouth-twisting sour crunch of rhubarb, meanwhile, suddenly tastes sweet, thanks to the bitter dandelion leaves.

Resist the urge to add sweet things to this little salad. Hold the strawberries. Skip the honey mustard. Leave the rhubarb alone with the dandelion, and let flavor take its course.

Instructions
Mix the dressing ingredients. Toss the greens, garlic, onions and rhubarb in the dressing, fully coating each leaf and chunk. Make sure each bite contains both bitter greens and rhubarb.