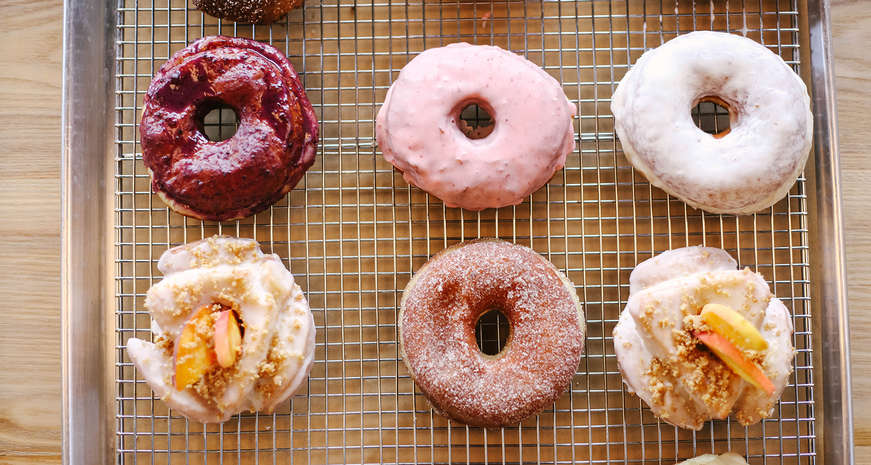 You’ll go nuts for these 16 wild and crazy doughnuts

There is nothing wrong in indulging in a simple, but delicious glazed doughnut. But if you want to take a walk on the wild side, doughnut shops and bakeries across the South are churning out crazy doughnut flavors that will blow your mind. Seriously.

Some of these doughnut flavors are basically full meals that will leave you smiling all day. Others are favorite desserts transformed into doughnut form.

Click the arrows above to see the crazy doughnuts 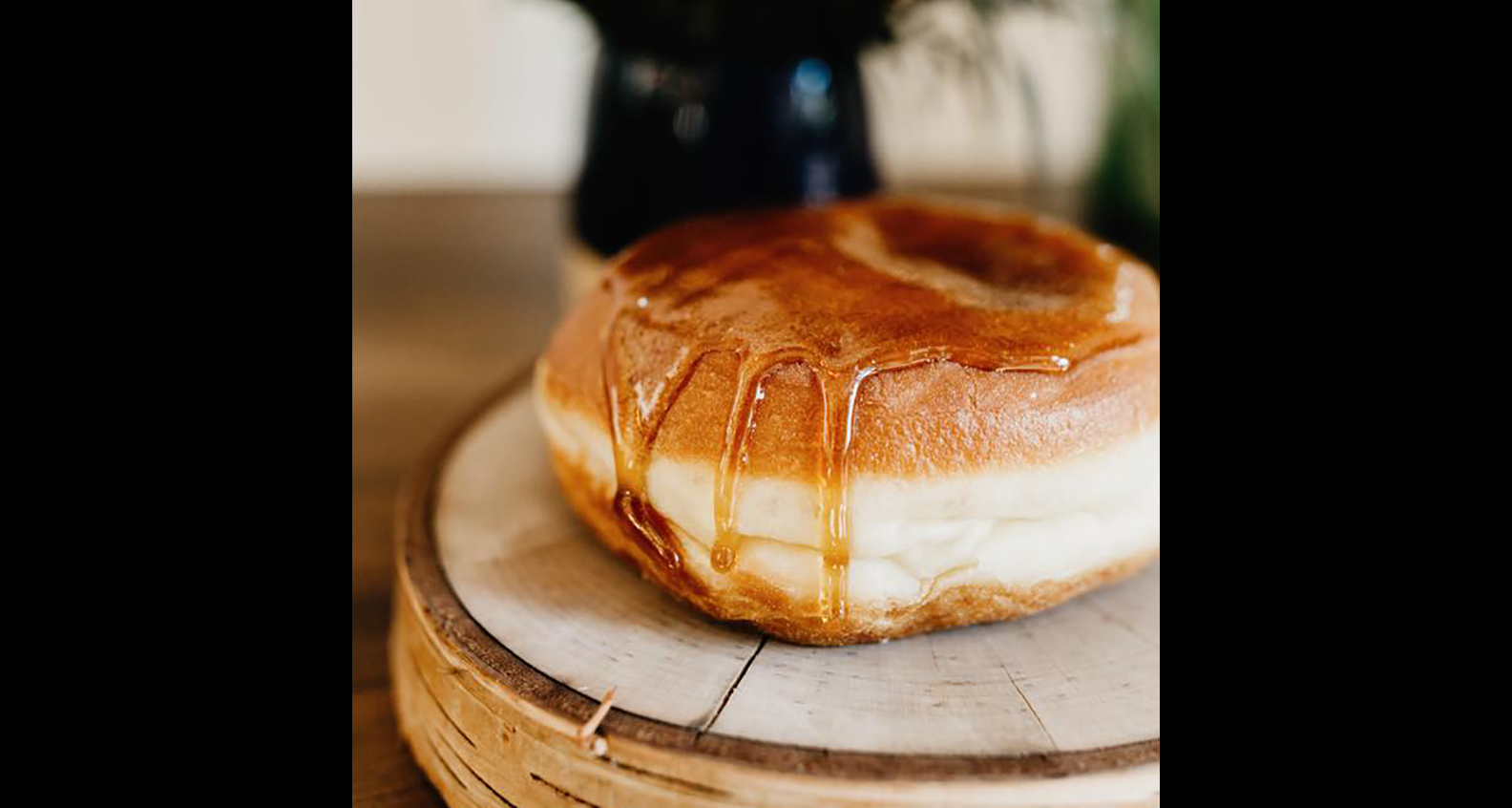 Flan Doughnut from The Salty Donut in Miami, Florida

You’ll crack over this flan doughnut from The Salty Donut in Miami. It was created by co-founder Andy Rodriguez to pay homage to the Cuban community in Florida, and the best thing about it is that it really does crack. Its hard sugar coating is dusted with gold and allows for a fun interactive experience while eating the cream cheese and caramel custard-filled brioche doughnut.

The flan doughnut from The Salty Donut isn’t the only crazy doughnut on the menu. It also offers a guava and cheese doughnut and a passion fruit and coconut doughnut. Flavors are constantly changing at this doughnut shop — the team creates wild seasonal and holiday flavors like Morello cherry and mascarpone French buttercream (for Valentine’s Day) and doughnut holes spiked with bourbon. 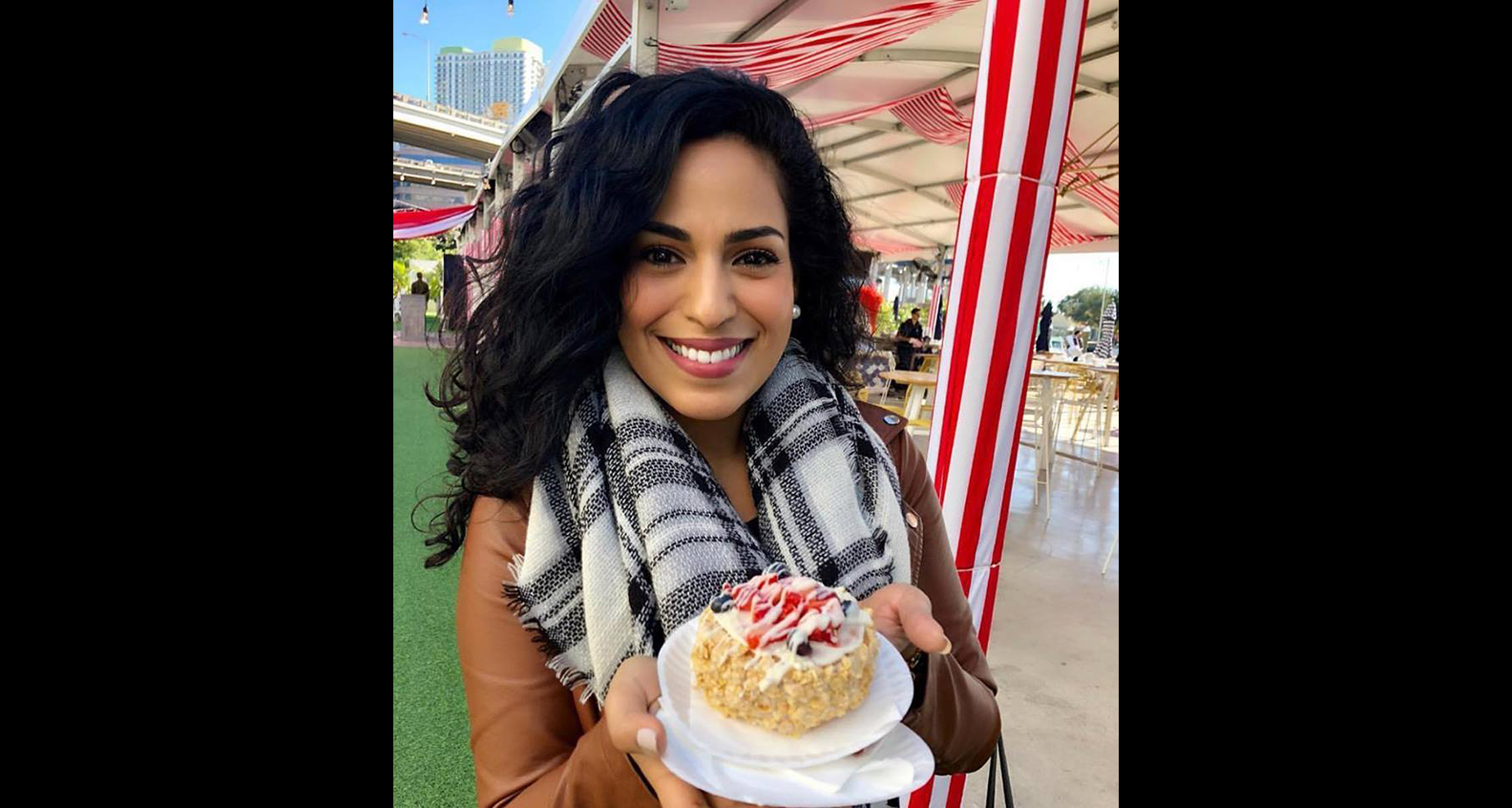 The Deco Delight from Mojo Donuts in Miami, Florida

Mojo Donuts offers over 50 flavors of delightful doughnuts. You might be tempted to dive into the decadent Death by Chocolate, but to really satisfy your sweet tooth you’ll want to try the Deco Delight, which is filled with banana cream, covered in white or dark chocolate, and topped with strawberries and blueberries. Another best-seller is the Abeulita doughnut, which is a cinnamon pastry filled with arroz con leche and topped with dulce de leche. 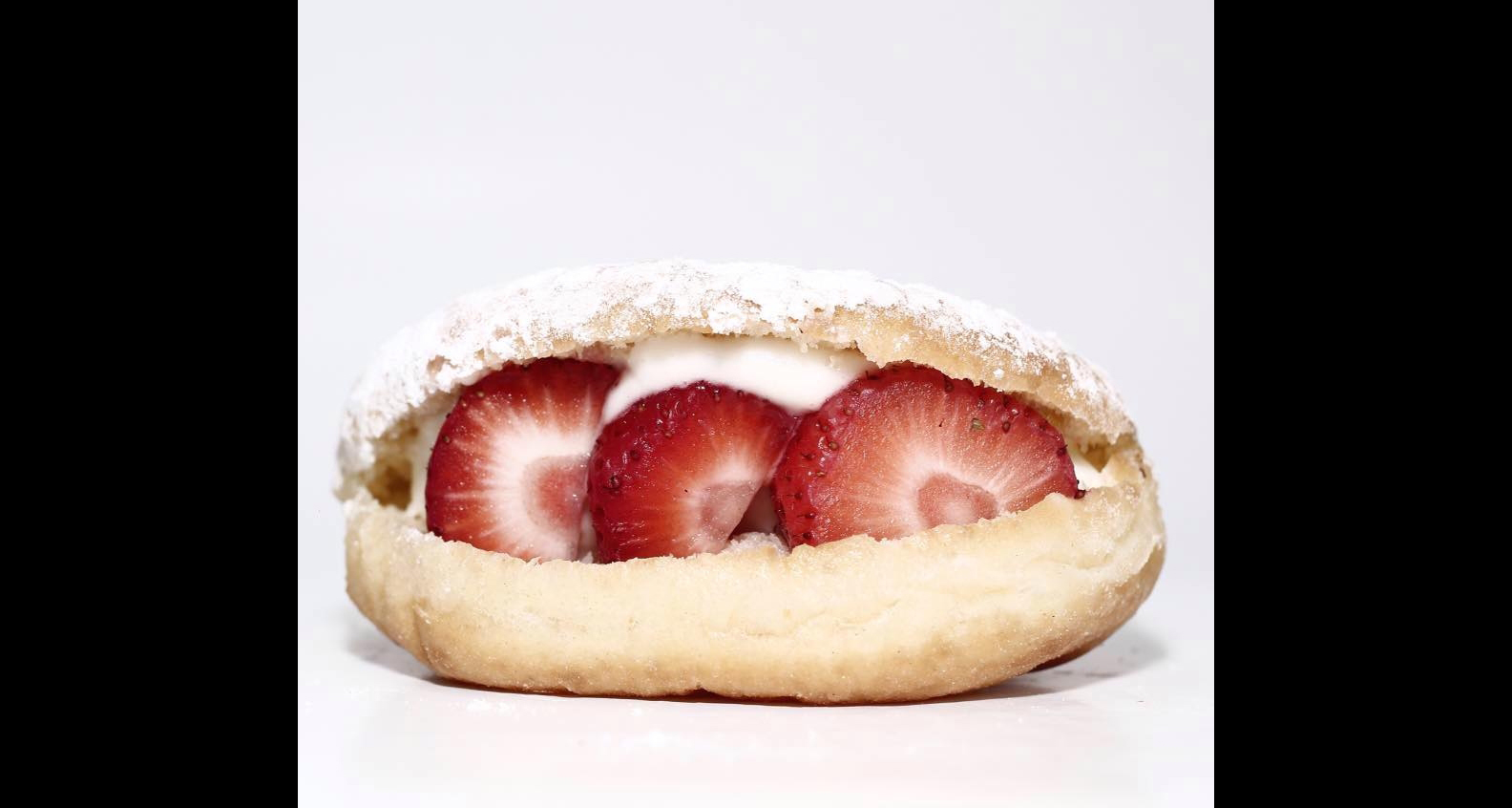 Strawberry and Creme Doughnut from Sublime Doughnuts in Atlanta, Georgia

Sublime Doughnuts has been making Atlanta smile since 2008. Chef Kamal Grant is continually integrating different flavor combinations across the menu, but a few flavors always stand out. Its fresh strawberry and cream doughnut is basically a doughnut sandwich, packed to the gills with fresh strawberries and sweet cream. More adventurous eaters should try the salt and vinegar doughnut, made from chocolate dough and topped with caramel glaze and balsamic vinegar reduction. Sublime also offers some distinctly Southern flavors, like a white chocolate peach fritter and a sweet potato cake doughnut, that you won’t regret trying. 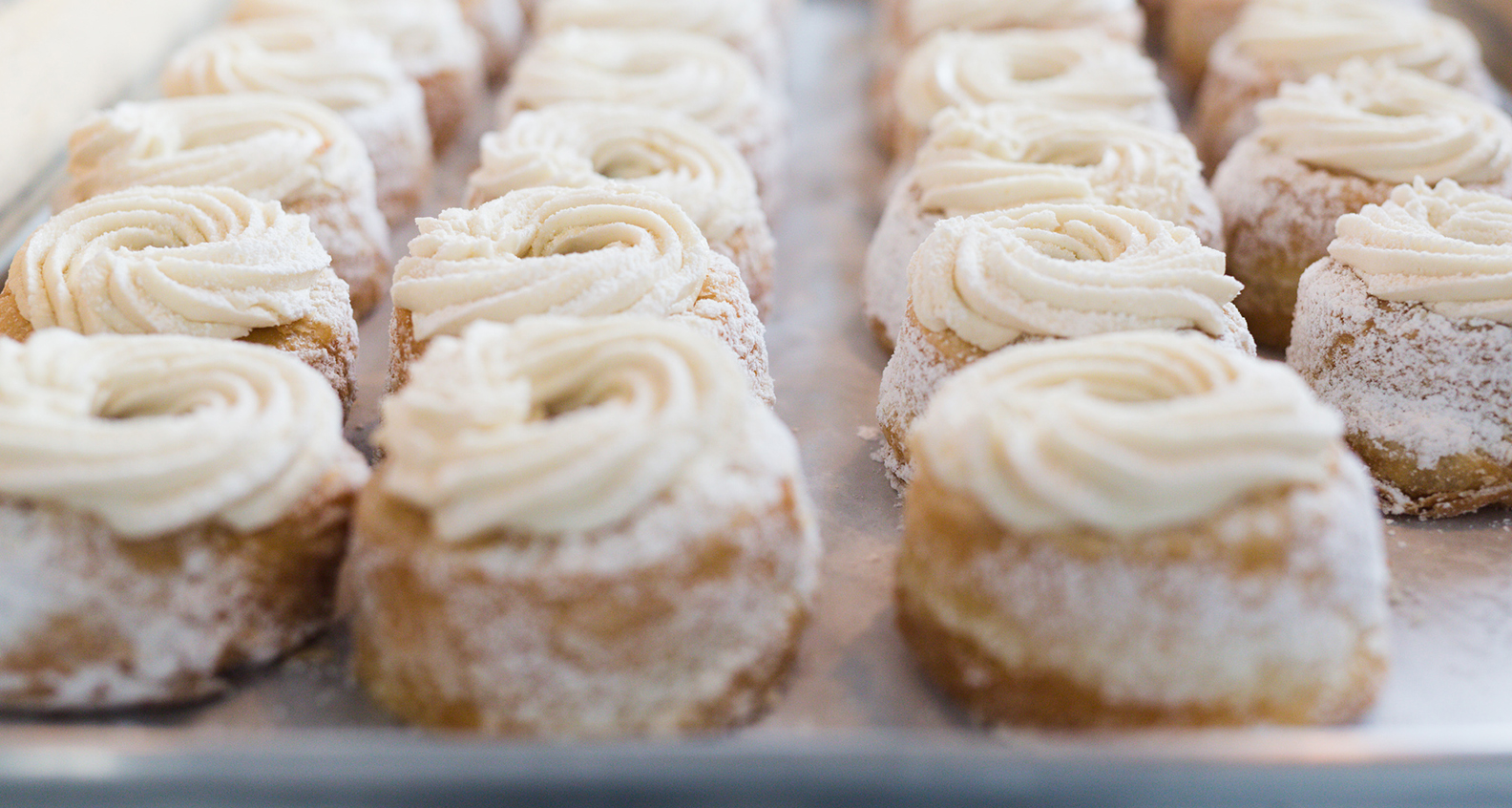 Five Daughters Bakery took the cronut and made it better. Their 100 Layer Doughnuts come in a variety of flavors like birthday cake, strawberry limeade, and chocolate sea salt. Atlantans soon won't have to travel to Tennessee for this sweet treat — Five Daughters Bakery will be opening a bakery in Ponce City Market this spring. 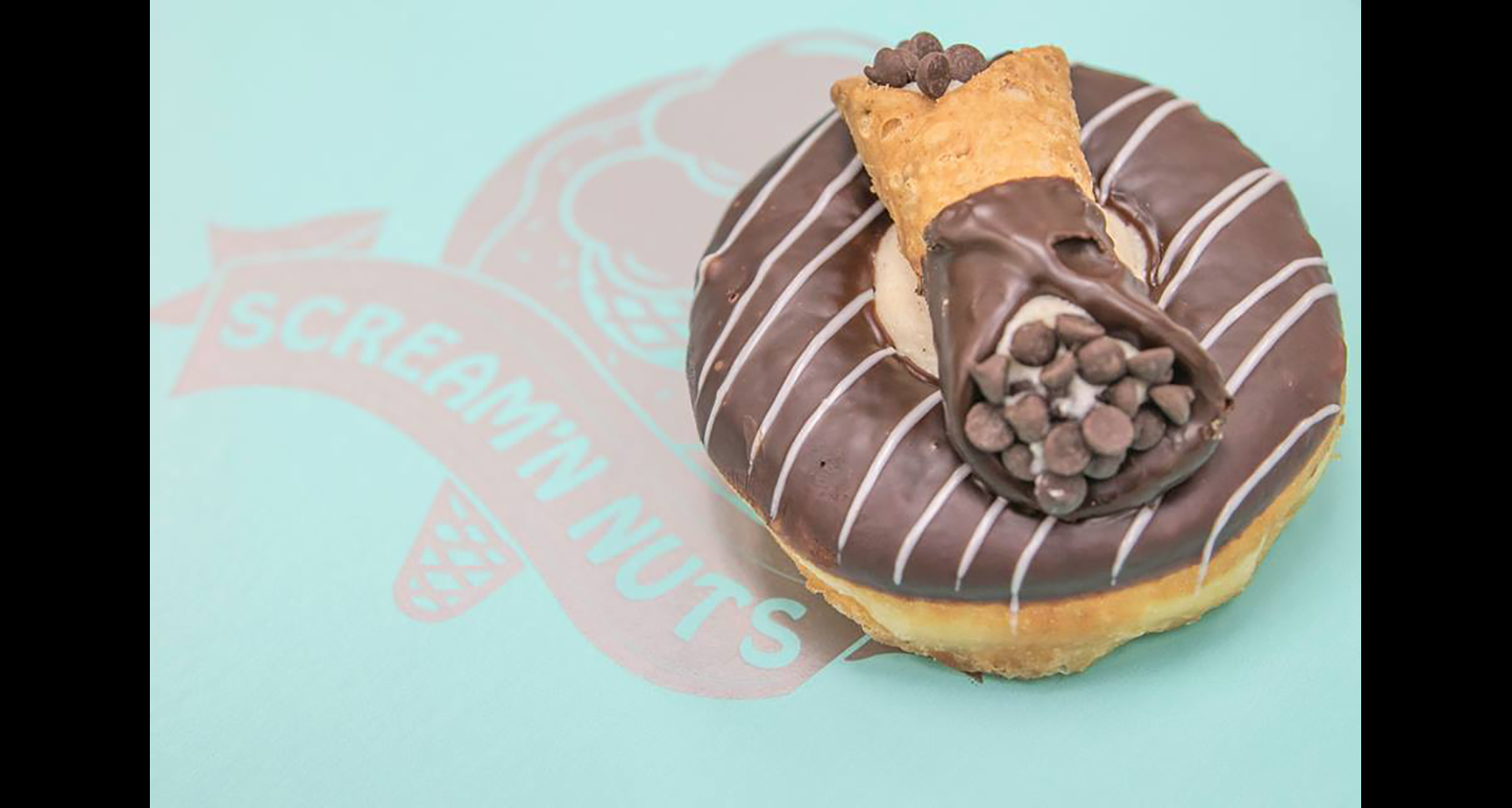 While the rest of the world is enjoying their doughnuts with coffee, customers at Scream’n Nuts are treated to a different delicious pairing — ice cream The “small batch creamery and donuttery” takes these two sweet treats to another level. The doughnuts aren’t just topped with frosting and sprinkles at Scream’n Nuts. You’ll find everything from cannolis, scoops of cookie dough, sugar cookies and pie dough atop the fried treats. For Valentine’s Day, flavors like strawberry daiquiri and heartbreaker (a white chocolate ganache-covered doughnut topped with red velvet cookies, M&Ms and a chocolate drizzle) were on the menu. If you opt for the ice cream at Scream’n Nuts, it’ll be delivered in a doughnut "cone" or stuffed into the center of a traditional shape. 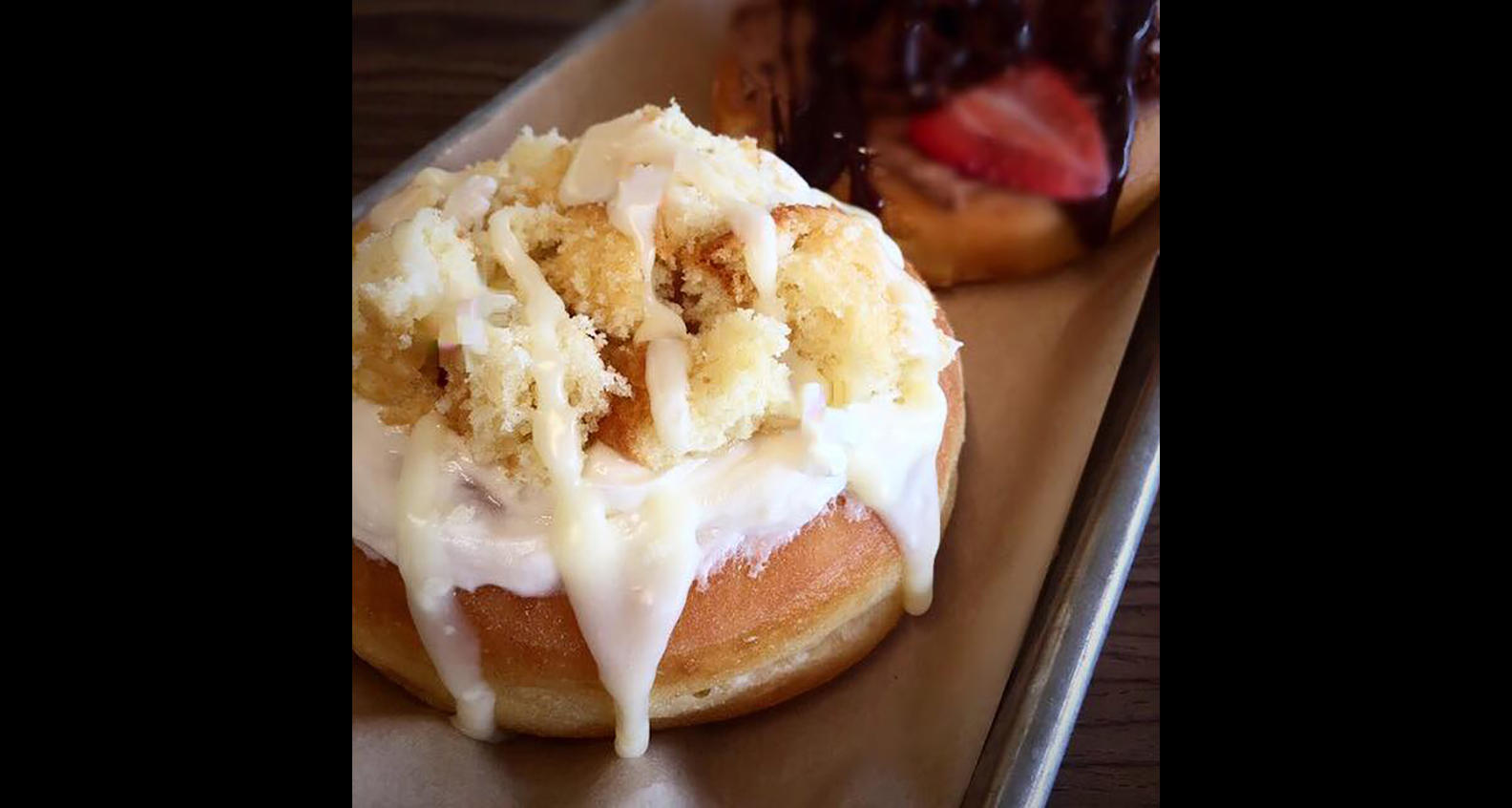 The deaux-nut flavors will leave you drooling when you look at Tiger Deaux-nuts menu. While the flavors are constantly rotating, the specialty doughnut shop brings back variations of favorite flavor combinations and new takes on them. If you’re a fan of cake, but also want to eat a doughnut, the shop recently created a wedding cake doughnut that was topped with amaretto cream cheese frosting, wedding cake crumbles, and a white chocolate drizzle (above). Another crazy flavor the shop recently offered was blackberry jalapeño, which covered in blackberry cream cheese and topped with blackberry sauce and candied jalapeños. If these don’t sound enticing enough, flavors like strawberry Champagne and chocolate peanut butter banana have also made appearances on the menu. 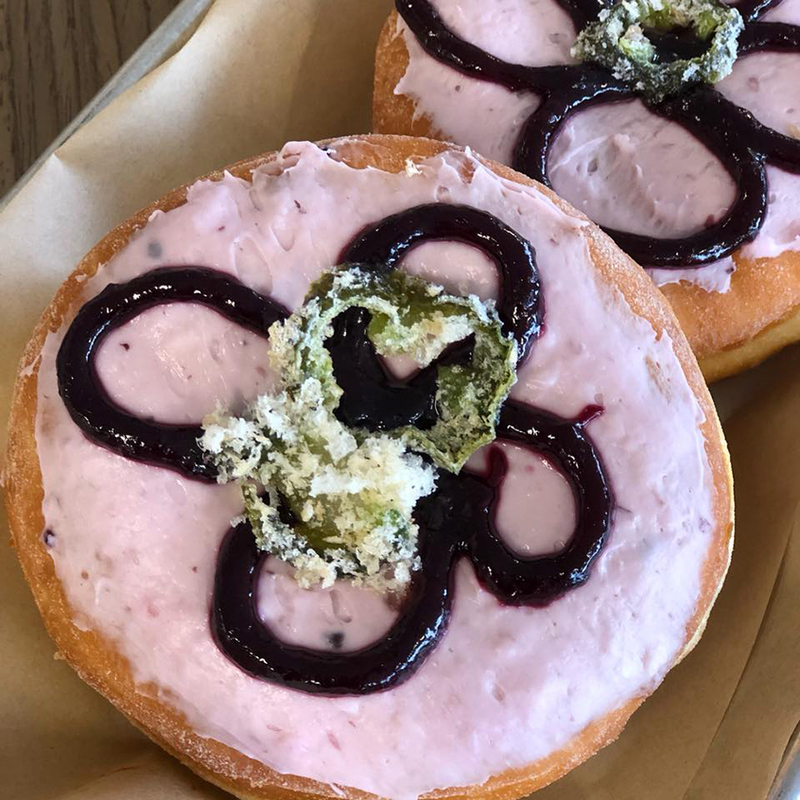 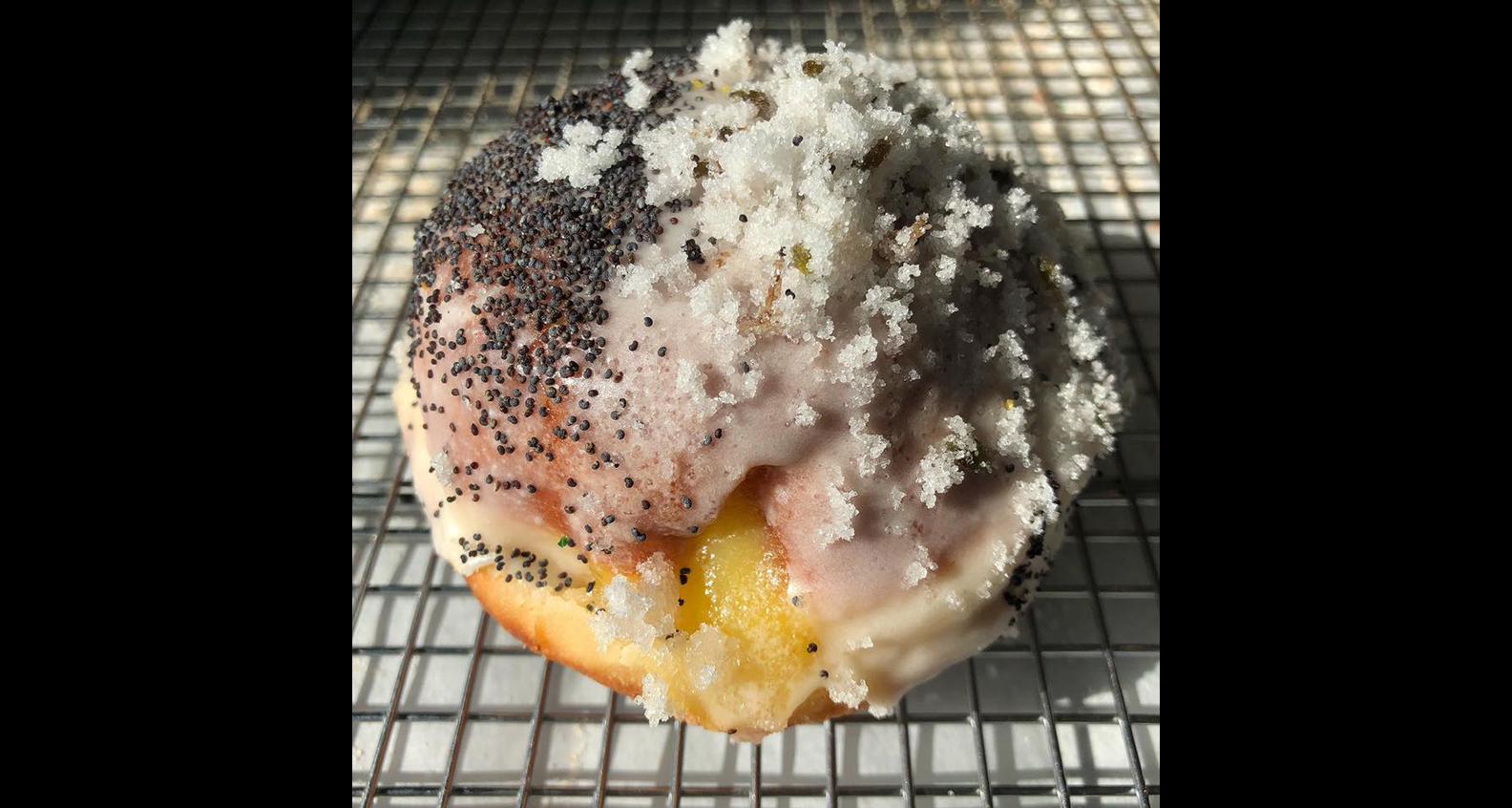 Sure, you can go to District: Donuts. Sliders. Brew. for a breakfast sandwich and coffee, but you’re really missing out if you don’t try at least one doughnut while you’re there. The flavors rotate each day and use holidays to come up with some wild flavors. In honor of Mardi Gras, the shop created a distinct doughnut for each of the different krewes in New Orleans. For the Krewe of Morpheus, the shop created a doughnut filled with lemon curd and topped with lavender glaze, poppy seeds and lavender sugar (above). The doughnut for the Krewe of Muses took a brighter and boozier turn with a Champagne pastry crème, a blue curaçao glaze and candied orange on top (below). 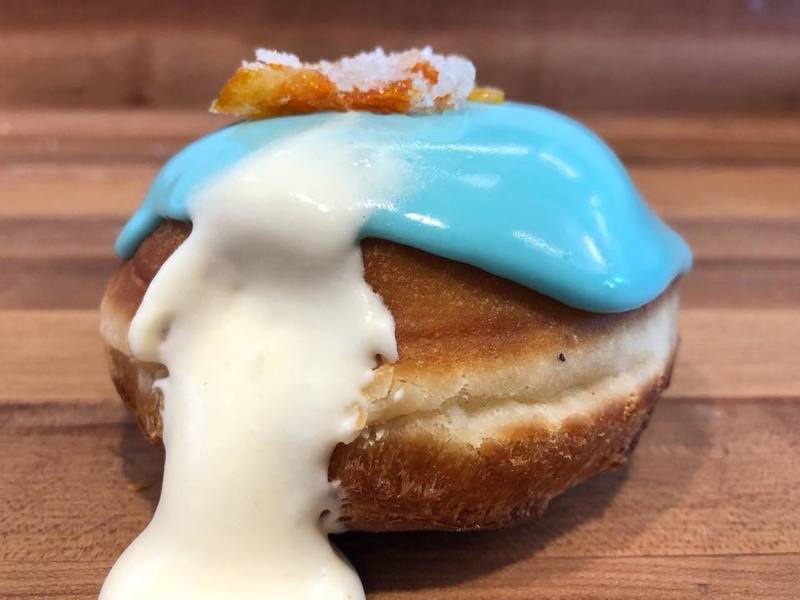 If you do want to order a breakfast sandwich, the croquenuts are the way to go. Instead of being served on toast or a bagel, they come served on a griddled doughnut. 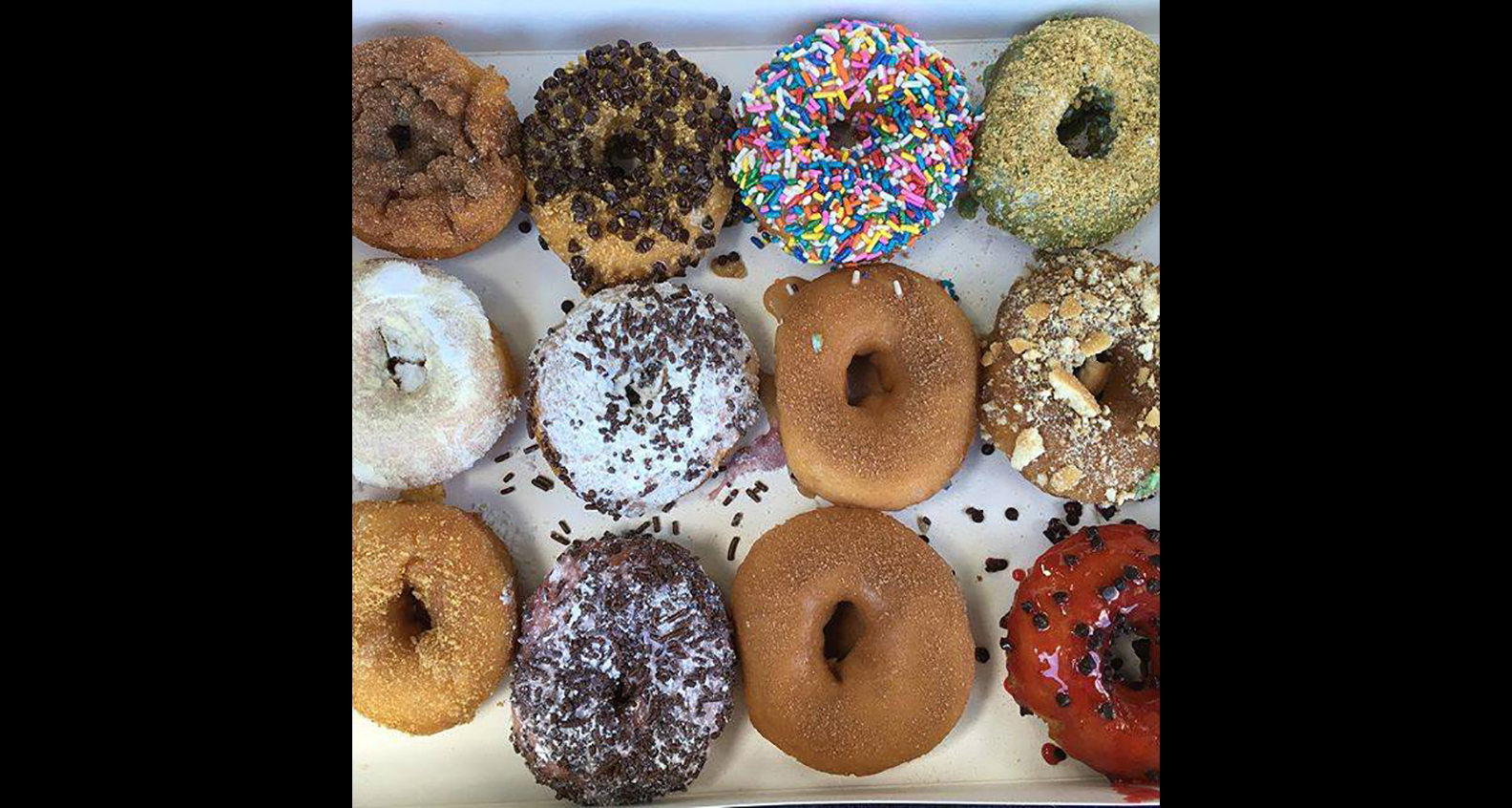 The Fractured Prune has been a doughnut destination in Ocean City, Maryland since 1976 because it allows customers to create their own flavors using different glazes and toppings. But if you don’t want to go to all that work (it's not that much work, come on), they have a few flavor combinations to help you out. You’ll find classics like chocolate peanut butter and salted caramel, but the flavors that really jump off the menu are margarita, peach pie, morning buzz (mocha glaze and cookie crumbs) and French toast. The best part about The Fractured Prune is that the doughnuts are constantly being made fresh, so they'll still be hot when you're ready to eat. 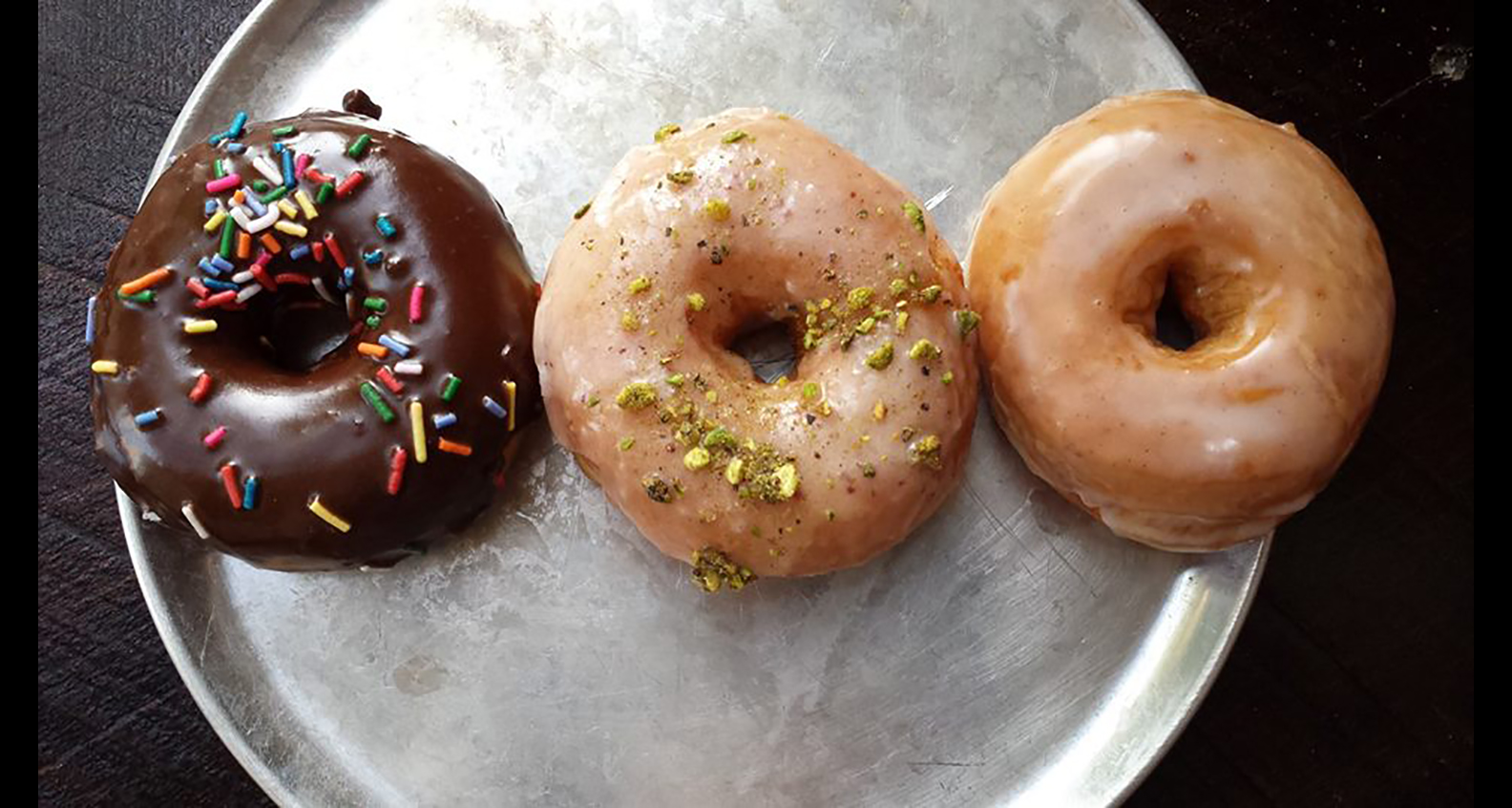 Monuts Donuts is a bakery and café in Durham, North Carolina. The busy restaurant makes everything from scratch using high quality natural ingredients. Diners will find sandwiches and salads on the menu, but for a sweet treat, head to the bakery counter. Each day, the doughnut flavors are posted on their Facebook page, so diners can get a sneak peek at what to expect when they head to the bakery. Some of the flavors recently featured on the menu include strawberry lavender, passion fruit cocoa nib, apple cider and chocolate chai. 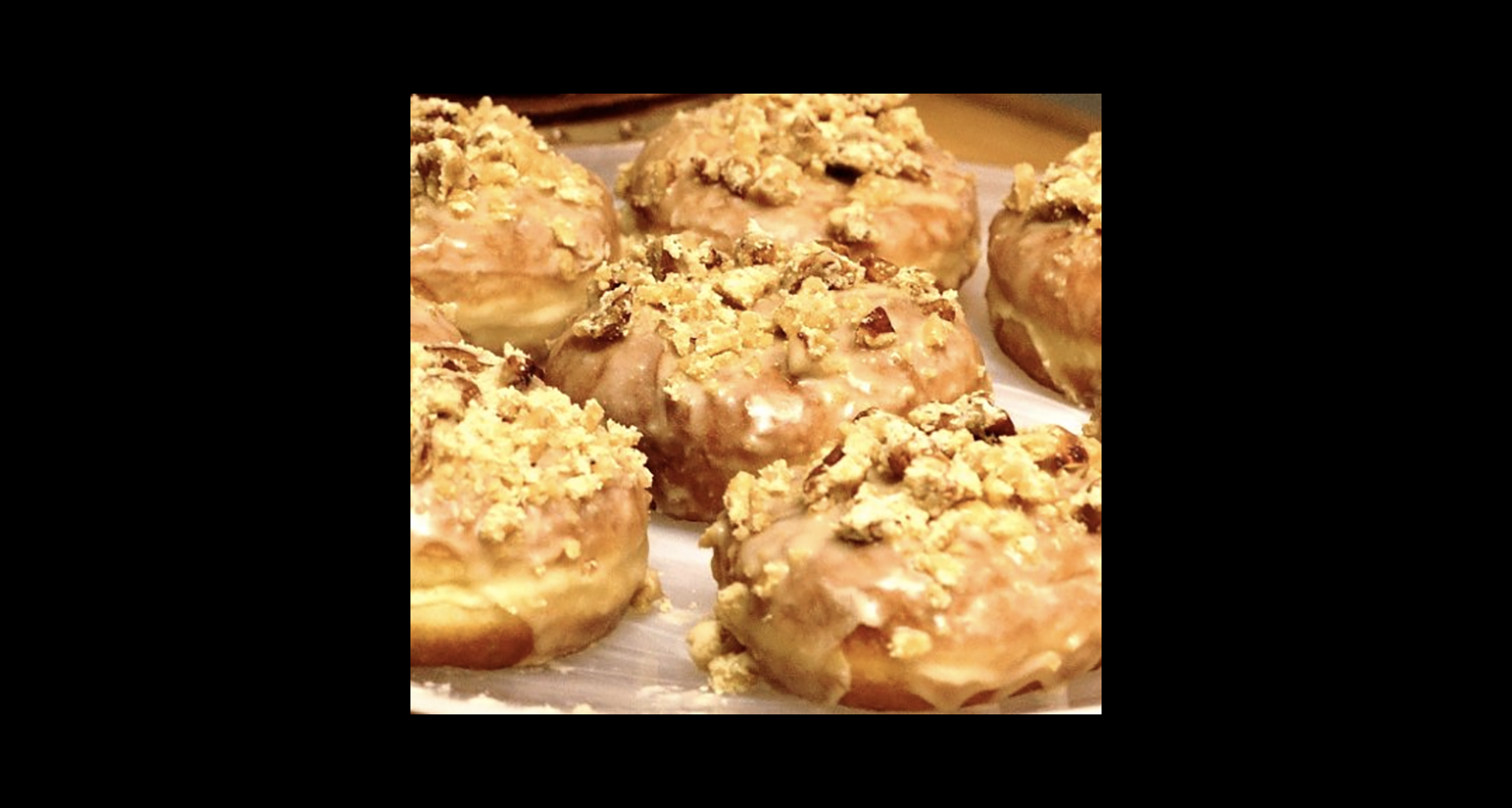 The Charleston from Glazed Gourmet Doughnuts in Charleston, South Carolina

Using local ingredients, chef Allison Smith and Mark Remi have created an assortment of doughnut flavors that range from simple glaze to complex confections, like the Irish Car Bomb. Not only are the doughnuts made from scratch, but the jams, fillings and glaze are all made in house. If you’re feeling fruity, the Far East Peach doughnut is filled with peach jam, burnt miso glaze and five spice cashews. Or if you're feeling "healthy," try the beet salad doughnut, filled with beet custard, glazed with a orange goat cheese and topped with candied fennel. The Charleston is a truly Southern treat that’s filled with bourbon cream, and topped with toffee glaze and homemade pralines (above). 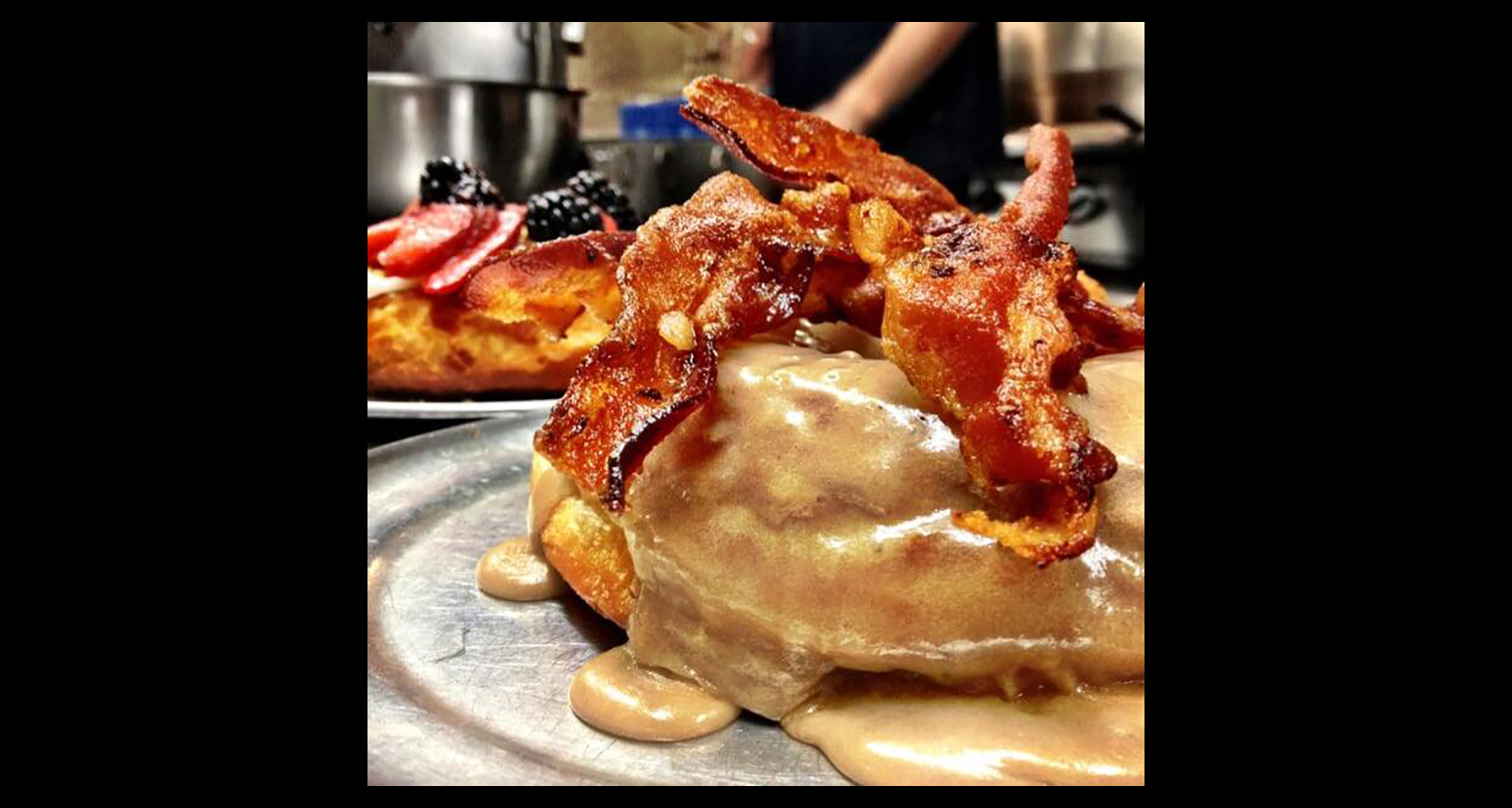 At Gourdough’s in Austin, the doughnuts are a complete meal. Take, for example, the Flying Pig (above). When most doughnut shops add bacon to a doughnut, they usually sprinkle a few tiny pieces of bacon on top. That is not the case at Gourdough’s. Here, bacon doughnuts are topped with a minimum of three strips of bacon. Likewise, the Mother Clucker (below) is topped with fried chicken strips and honey butter, and the Funky Monkey is covered with grilled bananas, cream cheese icing and brown sugar. 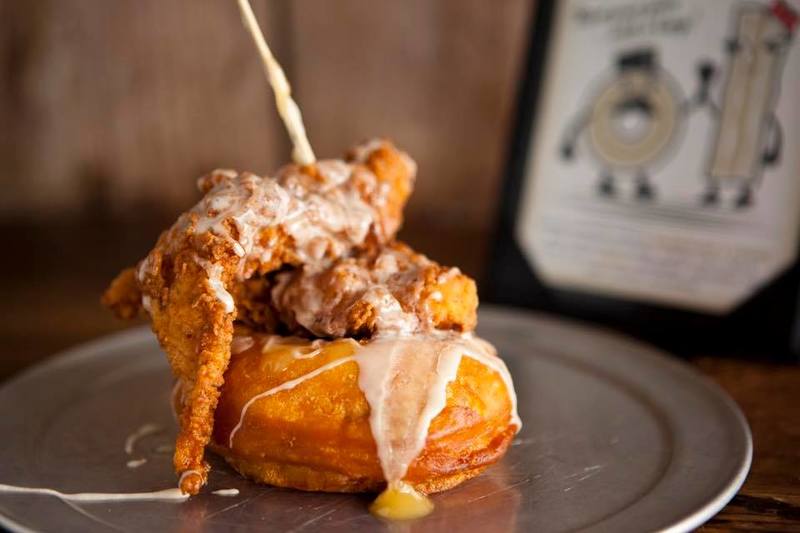 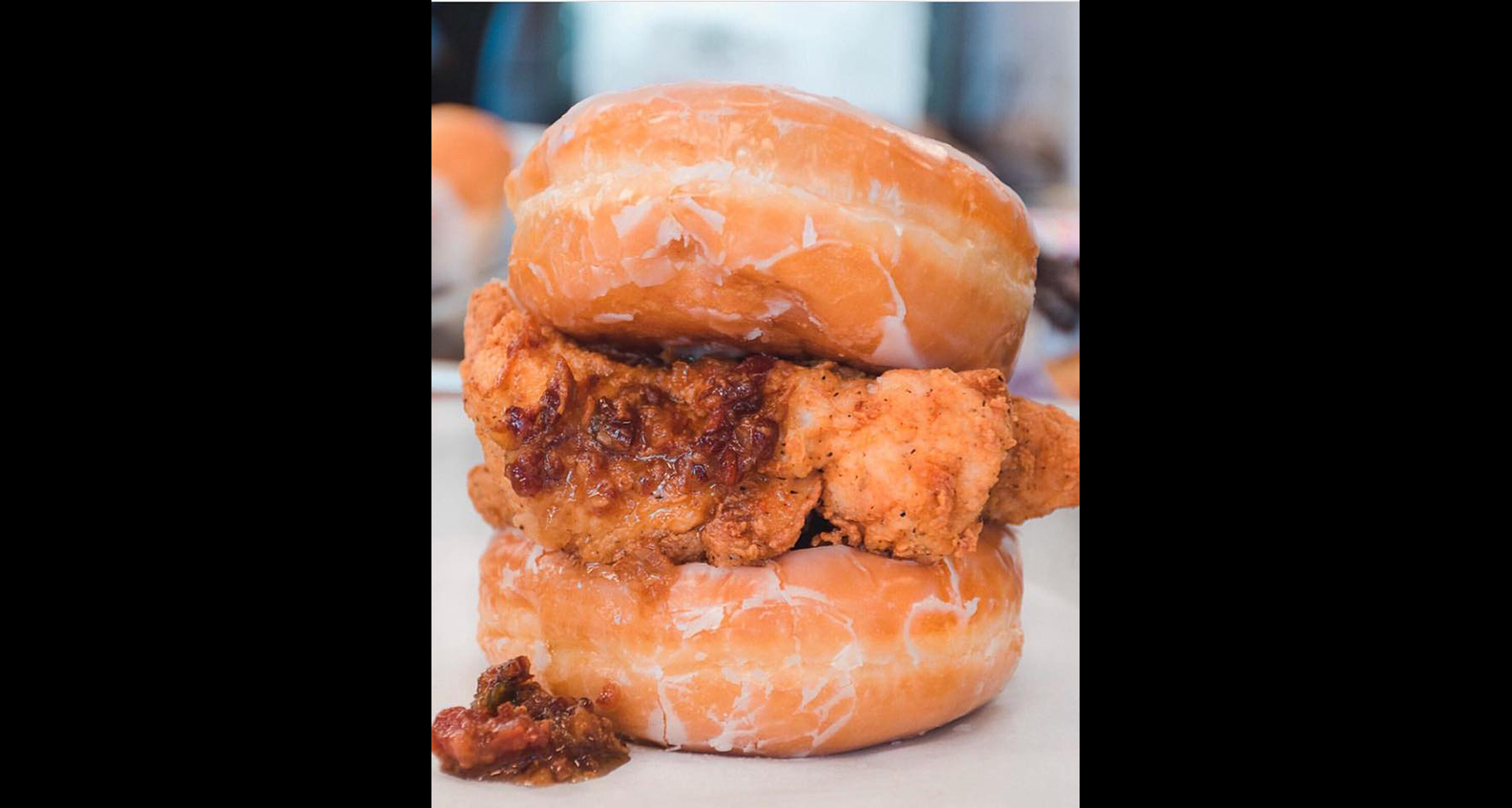 This Houston restaurant takes two of our favorite things and turns them into a salty sweet sandwich that is unlike anything you’ve had before. Instead of regular buns, the double donut fried chicken sandwich uses two glazed doughnuts. You can also enjoy these two items separately, but we think they’re better together. 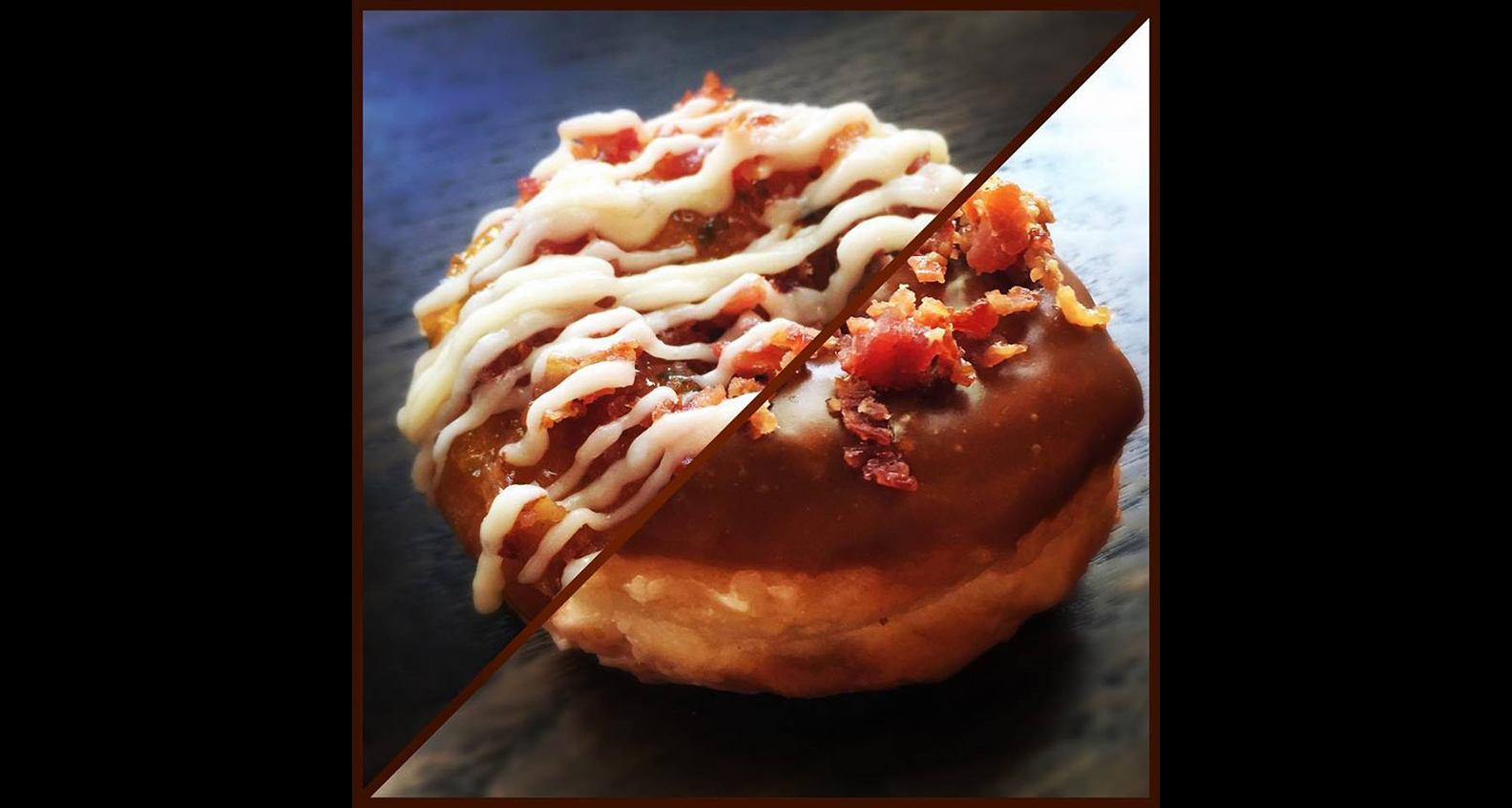 U Bacon Me Crazy Doughnut from Urban Donut in Dallas, Texas

At Urban Donut, “The Selfie” is a doughnut you create yourself by selecting everything from the type of doughnut to the filling, toppings and icing. But if you’re not feeling creative, you can choose from the doughnut menu that includes everything from PB&J to red velvet. However, we love bacon, so we’re partial to the "Bacon it Happen" (topped with maple icing and bacon) and the "U Bacon Me Crazy" (topped with jalapeno jelly, bacon and drizzled with cream cheese). 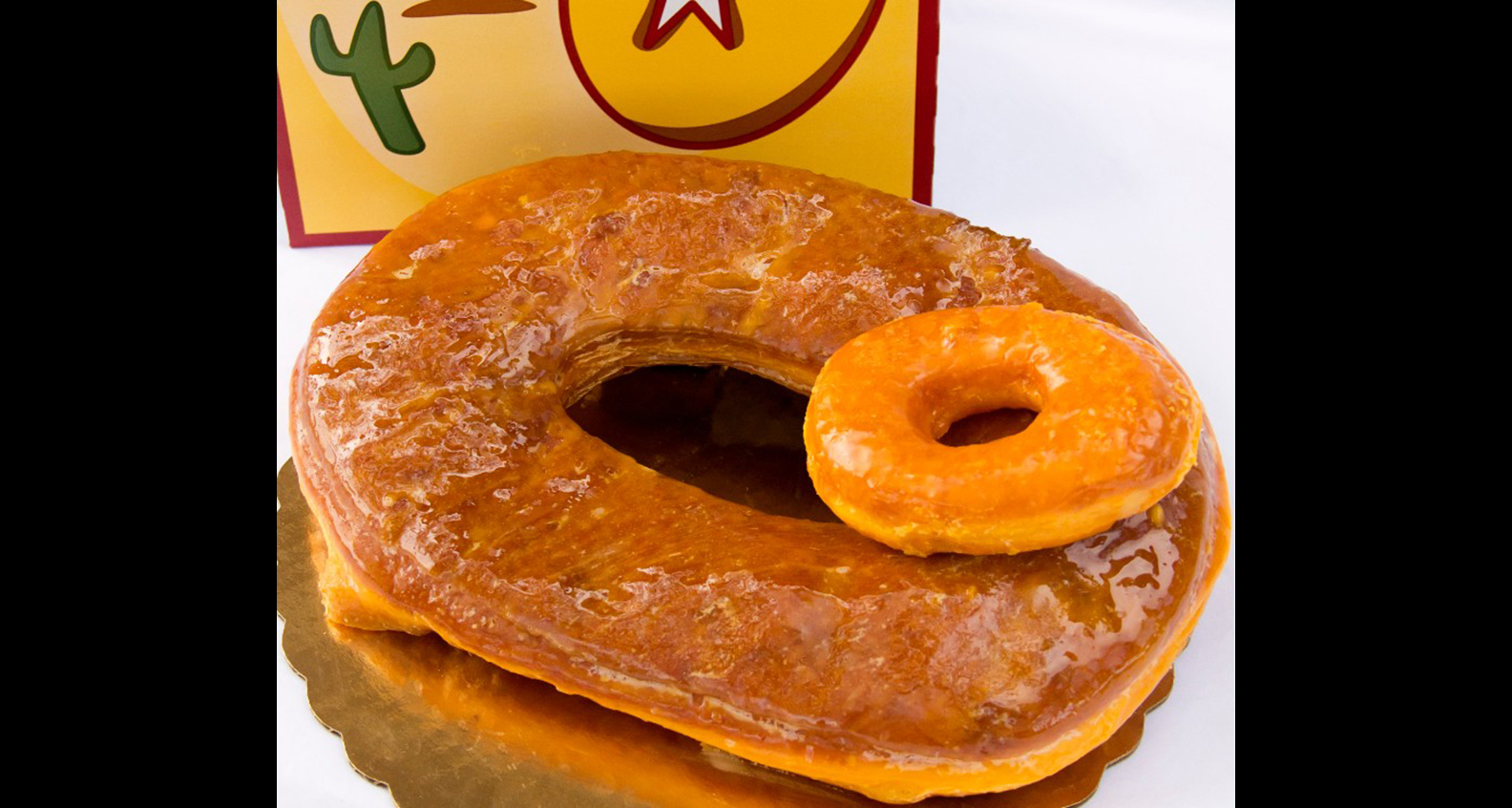 Texas-Sized Donut from Round Rock Donuts in Round Rock, Texas

You won’t find a lot of crazy flavors at Round Rock Donuts, but what you will find is a doughnut the size of Texas. When it comes to crazy doughnuts, this doughnut is a perfect fit — it is bigger than your head, after all. At $6.99, it's actually quite a deal; although you may want to share it with a friend or two. 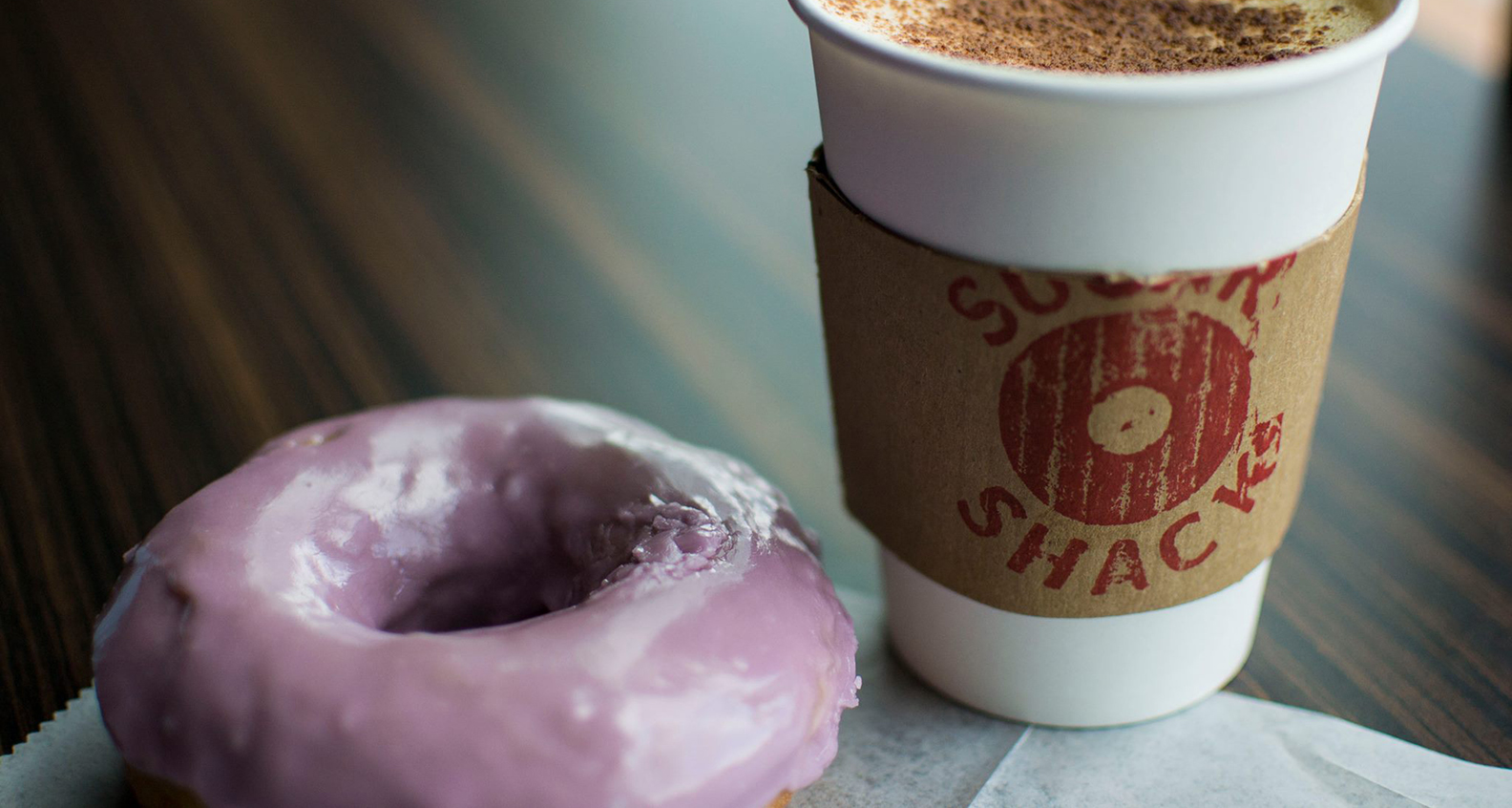 Sugar Shack makes some great doughnuts. The flavors vary at each location, but you can find some yummy options like chocolate caramel and cinnamon sugar. However, the flavor options aren’t all the basic ones we know and love. More adventurous eaters can choose from flavors like cucumber melon, blackberry basil glazed, honey lavender and pineapple serrano. 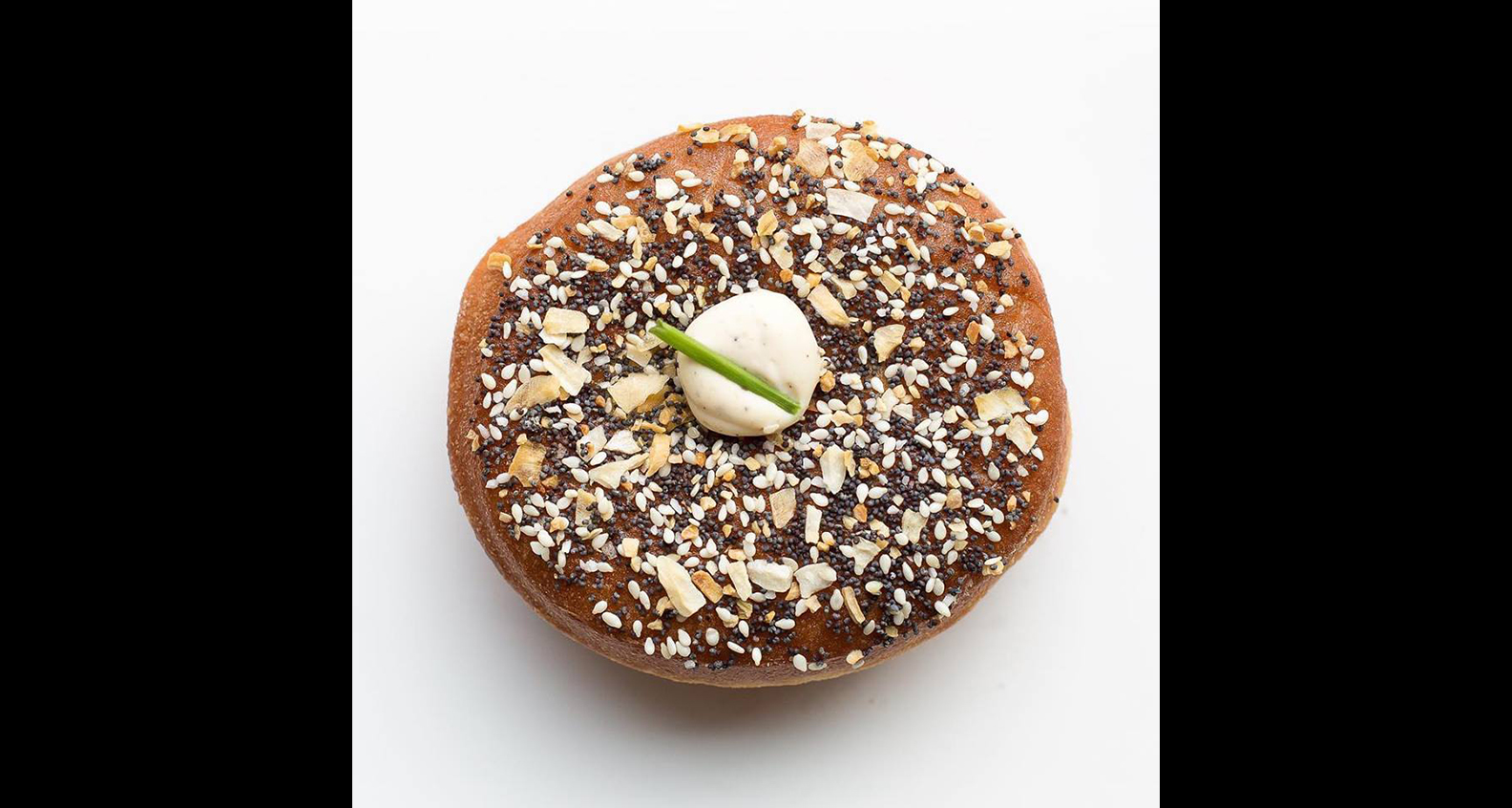 The Everything Cream Cheese Doughnut from District Doughnut in Washington, D.C.

District Doughnut has been selling specialty doughnuts in D.C. since 2012. Executive Pastry Chef Christine Schaefer has pushed the boundaries when it comes to flavors, experimenting with dessert flavors like key lime pie and chocolate crème brulee. One of the most interesting is another breakfast item turned into doughnut form — the everything cream cheese doughnut, savory fried dough tossed in everything bagel seasoning and filled with whipped chive onion cream cheese. If you want a sweeter option, try the cannoli (vanilla bean doughnut filled with amaretto chocolate chip ricotta and tossed in powdered sugar) or the vanilla crème brulee with a crunchy caramelized sugar top.