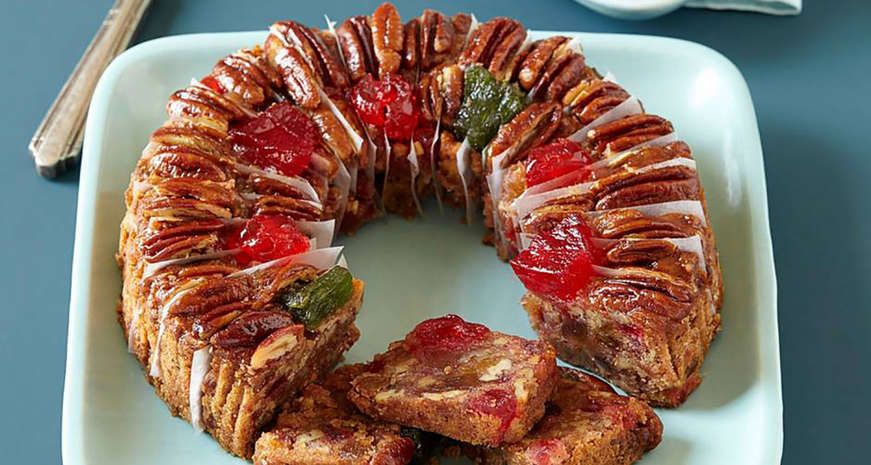 Oh, fruitcake, that brick-like cake of dried fruit and nuts, topped with more fruits and dried nuts, has been a holiday staple for more than a century. Love it or hate it, you’ll probably be gifted one or find fruitcake at some kind of holiday gathering this year.

And while all of us have seen our fair share of fruitcakes over holidays past, we didn't know that most of those cakes likely came from just two small Southern towns: Claxton, Georgia and Corsicana, Texas. The fruitcakes from both towns old top spots on Amazon and both have highly loyal followings. Indeed, if you happen to Google, "Fruitcake Capital of the World," you may find yourself reading Wikipedia pages about either town. So which should hold the title? Read on, and we'll let you decide for yourself. 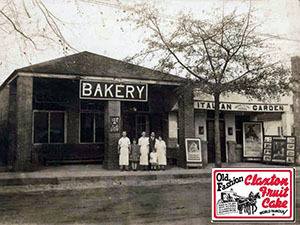 The Original
The origins of fruitcake date back more than 2,000 years to ancient Rome. Adweek notes that this O.G. fruitcake was a barley-mash cake, made with raisins, pine nuts, and pomegranates. Over the past 2,000 years the cake was served throughout Europe in various versions before making its way to the United States in the late 19th century.

One of the first towns to become home to a commercial fruitcake bakery was Claxton, Georgia, and today, two bakeries — the Georgia Fruit Cake Company and Claxton Bakery — produce more than four million pounds of fruitcake each year, according to National Public Radio.

Italian pastry-maker Savino Tos opened the Claxton Bakery in 1910 and, since opening, it hasn’t stopped churning out the candied fruit and nut-filled cakes. The bakery sells the fruitcake online, in stores across North America and through QVC. It currently offers the best-selling fruitcake on Amazon.

Today, Claxton is operated by Dale Parker, son of Albert Parker, who worked besides Tos at the bakery. When Tos retired, Albert Parker bought the bakery, but the bakers still use the same recipe Tos created over 100 years ago. Parker told Adweek: “The reason why we have been successful retaining our customer base is the fact that our cakes are very predictably consistent. They’re 70 percent fruits and nuts by weight. One of the differentiating points between Claxton and a cake you find on the supermarket shelf [is] that company may just take a little bit of pound cake and sprinkle a few fruits and nuts on top. That, to us, is not a true fruitcake.” 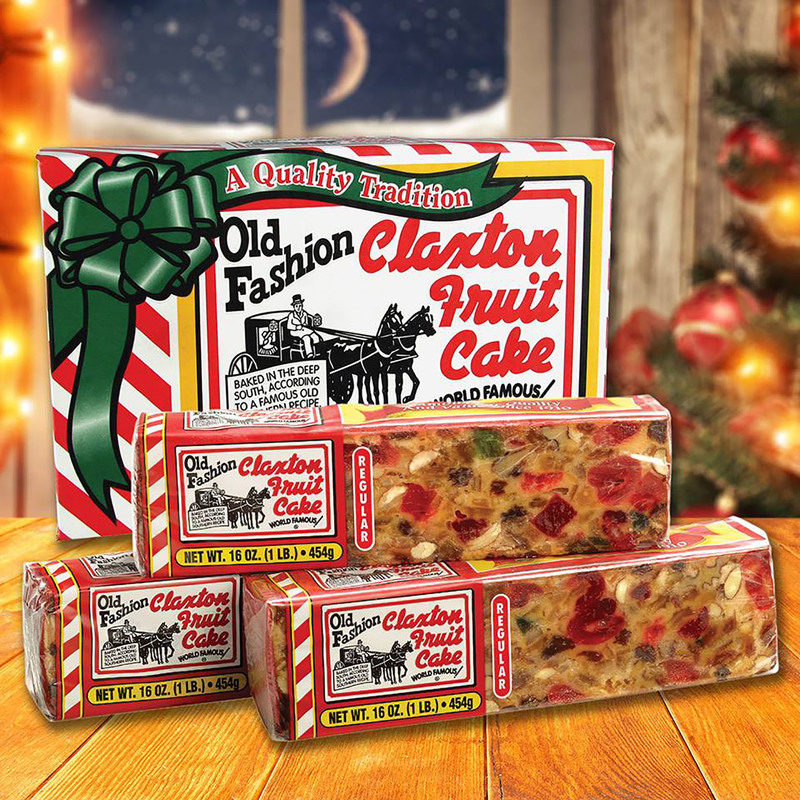 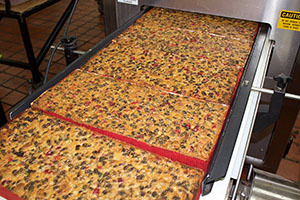 Churning out 375 pounds of batter at a time, the fruitcake making process at Claxton’s is a slow one. The mixing process is slow because the batter is extremely dense and the fruit is delicate; no one wants a smashed candied fruitcake. To ensure all of the necessary cakes are prepared for the holiday rush, baking begins in mid-August and the company is busy until New Years. Parker told Adweek: “An average baking day will see 86,000 pounds of fruitcake batter moving into the pans.” Each cake has a shelf-life of six months, but can be refrigerated or frozen to extend its freshness.

At the nearby Georgia Fruitcake Company, you won't find imitation booze in the fruitcakes. Owner John Wombles spikes some of the fruitcakes with bourbon, and his cakes come out a little darker than Claxton’s. Womble told NPR a whole new generation of younger people is stopping by to buy his cakes. (Maybe it's because of the bourbon?)

"The younger people that we've picked up are generally hikers, bikers, outdoors people who found out that you can take fruitcake with you — you don't have to worry about it going bad once you open it," Womble said. He also told NPR the ideal fruitcake should look like a stained glass window when held up to the light.

Back at Claxton’s, Parker said that a slice of any good fruitcake should be able to be folded in half without breaking, noted Adweek. 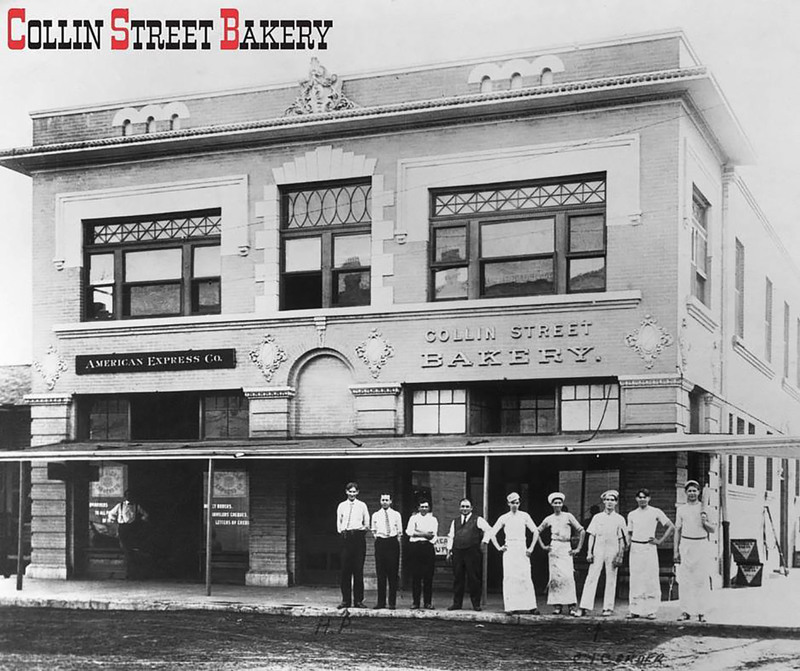 The other fruitcake capital of the world
Corsicana, Texas, nicknamed “Fruitcake, Texas,” was put on the map by Collin Street Bakery. Instead of Italian origins, the Collin Street fruitcake recipe comes from Germany. Baker Gus Weidmann made his way from Wiesbaden, Germany to Corsicana, where he opened the bakery in 1896.

Unlike Claxton’s fruitcake, which is shaped like a brick, Weidmann’s Original DeLuxe® fruitcake is circular in shape. The fruit and nut mixture is also slightly different. Along with pineapple, cherries and golden raisins, the bakery uses papayas in the fruitcake. The pecans, which make up 27 percent of each fruitcake, come from Texas and can be found in other popular cakes the bakery sells.

Collin Street gained notoriety in the early 20th century when John Ringling and his circus troupe tasted the fruitcake and wanted to send cakes to friends and family throughout the country and Europe. The bakery has been in the mail order business ever since, and it can ship almost any quantity of fruitcake around the world. The Original DeLuxe® fruitcake is the number two bestseller on Amazon.

“In this town of about 25,000, the bakery hires as many as 700 seasonal workers to fill the onslaught of holiday fruitcake orders. As many as 30,000 fruitcakes are baked every day; about a million are produced yearly,” reported MySanAntonio.com. 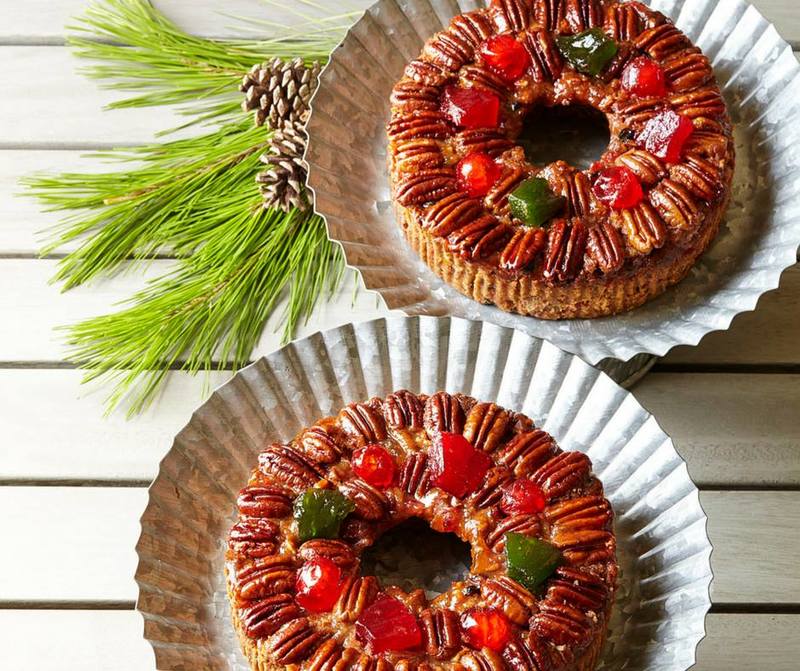 In 2014, the bakery and town were thrust into the national spotlight when it was discovered that the bakery's corporate controller and accountant, Sandy Jenkins, along with his wife, had embezzled $16.6 million from the bakery and used the embezzled money to pay for vacation homes, luxury cars and a lavish lifestyle.

Jenkins covered up the scheme by gaining the trust of the community. He showered the town with public acts of generosity, including donations to his church, as well as local art and school programs. He even bought the entire bakery lunch, reported the Star-Telegram. The scandal was featured on season 11 of CNBC’s “American Greed.” In the end, Jenkins was sentenced to 120 months in federal prison.

Even with a scandal of this magnitude the bakery continued baking its famous fruitcake, but learned from the mistakes that allowed the embezzlement to unfold. “Sandy was a friend, a trusted associate,” Hayden Crawford, a bakery partner and its marketing chief, told the Star-Telegraph. “We were operating a 117-year-old business much like it had always been run. It goes without saying, we’ve learned our lesson and made the necessary changes to safeguard us from this kind of thing in the future.

“But when this was going down, our suspicions fell on everything except our own people,” he added. “We are obviously far better at making a quality fruitcake than spotting a thief.”