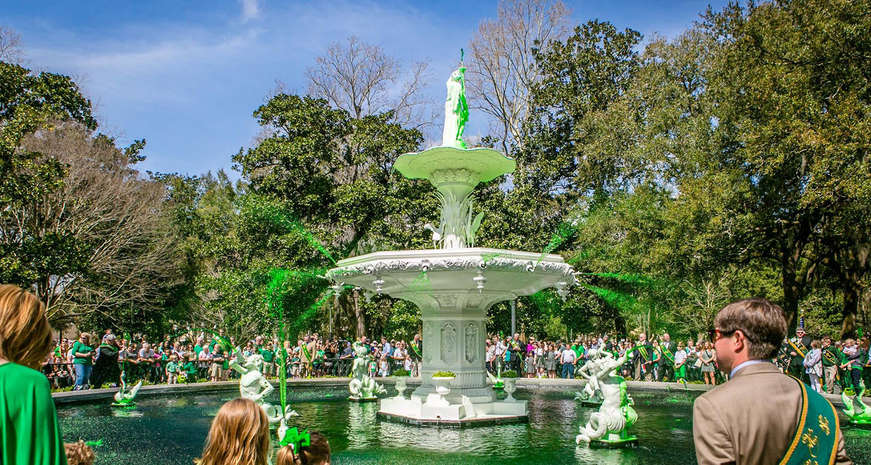 The Forsyth Park Fountain in Savannah

In a few days, the Guinness will be flowing and the Irish, clad in Kelly green and covered in shamrocks, will take over Savannah for a memorable St. Patrick’s Day celebration. The fountain in Forsyth Park will be dyed green, but the river won’t — they tried that once and let’s just say it didn’t work out so well.

At over 200 years old, Savannah’s St. Patrick’s celebration is one of the largest in the country, second only to New York City, according to Savannah.com. Last year, almost half a million people from across the country flooded the streets of the port city to honor and celebrate their Irish heritage, and this year won’t be any different.

Irish roots run deep in Savannah, as well as in the rest of the state of Georgia. In fact, the Irish were among some of the first settlers to arrive in the new colony in 1734. Along with being some of the first people granted land, the Irish had their hand in shaping the colony and boosting the economy in the South. Dr. Howard Keely, the director of the Center for Irish Research and Teaching at Georgia Southern University, explained that while James Oglethorpe is the founder of Georgia, an important Irishman named Henry Ellis is responsible for keeping the colony afloat. Ellis was the second royal governor of the colony and created its county system. He also strengthened relationships with Native Americans, which helped settlers get access to more of the state. 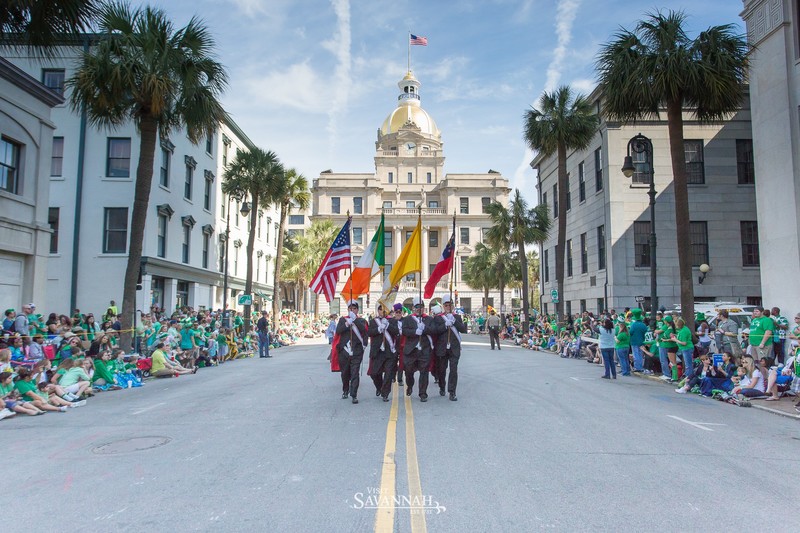 “The influence of Henry Ellis is one of the major ways in which we see Savannah as an Irish city today,” Keeley explained in a Reflector Magazine article. “Ellis is known by some historians as the second founder of Georgia because of the way he relaunched the Georgia project.”

By the early 1800s, a large population of working class Irish people were living in Savannah, and a large population had settled across 15,000 acres of land between Augusta and Savannah, the area of which is now the city of Louisville. “At this point, [the population of] Savannah [began] to turn into a blend of the Presbyterian Scots-Irish and the often lower-class native Irish Catholics,” explained writer Casey Rohlen in a Reflector Magazine article.

The Irish continued seeking work around Savannah, and they found it easily, as there was a great demand for help to build the canals, ports and, later on, even the railroad system.

The last, and largest, migration of the Irish came as Ireland was facing one of its most tragic moments in history: The Great Famine. “In the 1850s, shipping routes carrying immigrants to America were running from southeastern Ireland to Savannah,” Keeley explained in an interview with the Atlanta Journal-Constitution. Research suggests that as many as one in three white households in Savannah in 1860 were from Ireland — "not just Irish, but Irish-born,” he said. 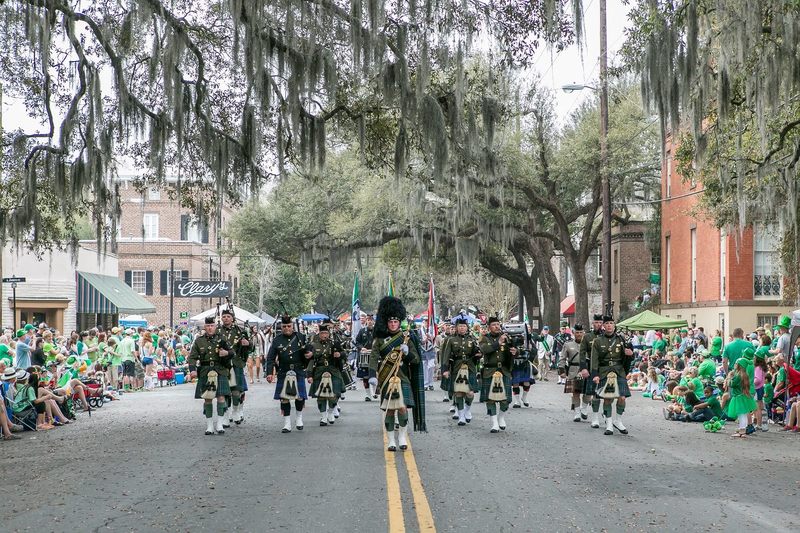 Throughout the Industrial Revolution and early 20th century, the Irish flocked to other cities around the country, like Boston, New York City and Chicago, but Savannah has always held a special place in the heart of Irishmen. Even though the mass immigrations slowed down in Savannah during the early 20th century, those who did find their way to Georgia thrived, and you can still feel their presence today.

More Georgians claim ancestry in Ireland than any specific foreign land other than England, according to the U.S. Census Bureau. According to a report from the AJC, that means almost 800,00 people have reported having Irish heritage. While the concentration of those claiming Irish ancestry has shifted to Northern Georgia, Savannah is still the central place to celebrate St. Patrick’s Day in the state.

Although she comes from Scottish decent, Southern Kitchen’s Visual Editor Ramona King felt the presence of the Irish while growing up in South Georgia. She remembers a childhood filled with potatoes and cabbage on the table. “Potatoes are a true staple of every meal,” she said. “There was lots of cabbage too. My great-grandmother was Dutch, but had Irish influence in her cooking, and each summer they would make their own sauerkraut in large barrels and drink juices off the top as a sort of ancient Gatorade. Most people think of sauerkraut as a German dish, but it’s definitely an Irish one, too.” 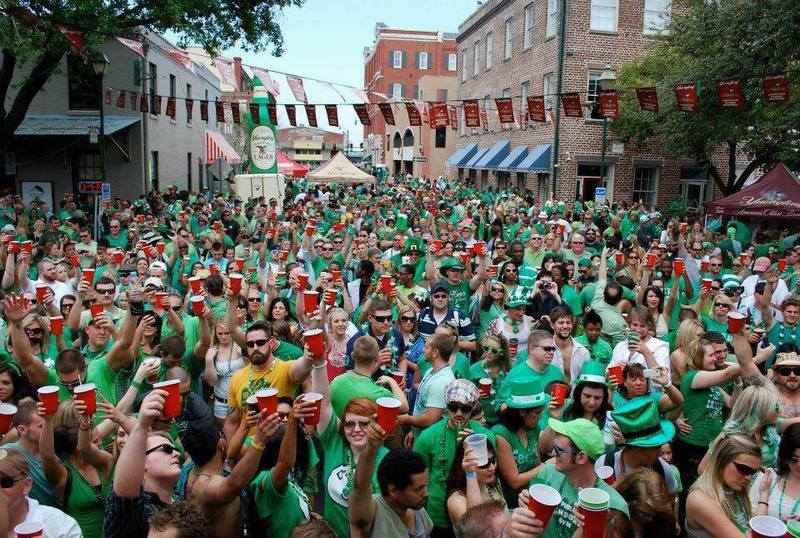 Savannah’s St. Patrick’s Day parade will kick off a weekend of celebrations, which include the Savannah Irish Festival, where guests will sample Irish foods and beverages while Irish music and entertainment fills the Civic Center, and the St. Patrick’s Day Festival at River Street and City Market, where restaurants, food trucks and entertainment will provide merriment throughout the weekend.

Those seeking a real Irish pub experience on St. Patrick's day should head to O’Connell’s, McDonough’s or the world-famous Kevin Barry’s Irish Pub, which is owned by a second-generation Irishman Vic Powers.

Kevin Barry’s is a 35-year-old establishment located in one of the city's oldest buildings on River Street with a great view of the Savannah River. In 2016, the pub was named the “Most Authentic Irish Pub” by the Irish Pubs Global Federation for its name, decor and live traditional Irish music. 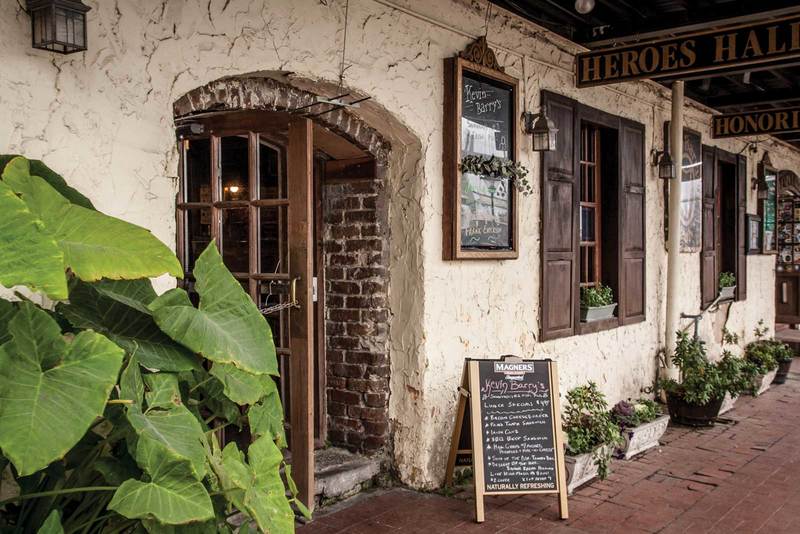 “Kevin Barry's Irish Pub is not the Americanized Irish pub that you will get a green beer from, nor will you get a shamrock on top of your Guinness,” the pub’s PR manager Tara Reese told Southern Kitchen. “But what you will find is a proper pint of Guinness being poured, traditional Irish music and customers from all over the world sharing stories.”

King agrees that Kevin Barry’s is very authentic. For her, it’s the traditional live Gaelic music that completes the experience. “My favorite experience there is getting an Irish coffee, which is served in traditional glass with Jameson, listening to beautiful music,” King said.

Savannah’s other Irish pubs also have a lot to offer. The Rail Pub and Molly MacPherson’s Pub and Grill are great places to sing karaoke and down a few shots of whiskey. After studying abroad in Ireland, King knows what a true Irish pub looks like, and she said that Molly MacPherson’s transports her back to Ireland.

And for a true authentic Guinness, there’s only one place to go: O’Connell’s. “Their Guinness is true to how you’ll find a Guinness in Ireland,” King said. “They know how to pour a Guinness like a how a Guinness should be poured.”