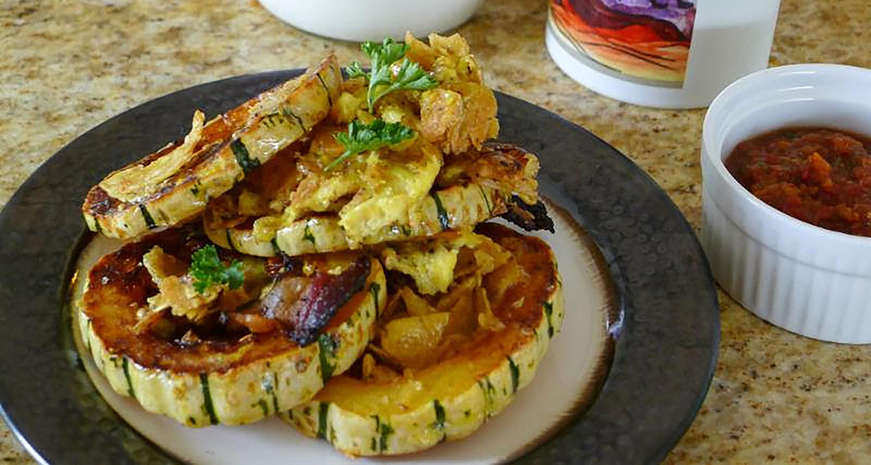 Breakfast doesn't have to come before noon, but does have to include eggs

One of the last things my dad ever chewed me out for was adding eggs to a lukewarm pan. He didn't get worked up about too many things, but he wasn't going to let me screw up his breakfast.

And I have to say, there certainly are a lot of fools trying to screw up breakfast. This is partly due to the fact that we tend to be extra picky about the first meal of the day. And stubborn. There are a number of people who forsake the instant crispy sizzle-puff that happens when eggs hit hot grease in favor of slowly cooked eggs. These people, along with those who like their eggs well-cooked, are straight up lunatics if you ask me.

We differ not only on what to eat for breakfast, but on when to eat it. Since we could chew solid food we've all been fed the line that "breakfast is the most important meal of the day." In a literal sense it may be true that the first meal of the day is the most important, but this cliche is typically used to tell people that they should wake up and eat a big breakfast first thing in the morning.

Breakfast skippers like myself beg to differ with this interpretation. I don't wake up hungry, and feel that the longer I put off breakfast, the more important of a meal it becomes. I want to be hungry before I eat. Edward Abbey wrote that hunger is the best sauce, and other than being wrong (mayonnaise is), he's right: a clamoring belly is like foreplay to a good meal.

The champions of an early breakfast insist it will give you more energy throughout the day while you consume fewer calories, because you won't be ravenous all day like a breakfast-skipper. They have their supporting statistics, explanations and theories about how your body will enter starvation mode and hang onto every calorie it can. But when you actually start studying the question, the answers don't support a universal breakfast doctrine.

There is a broad scientific basis for this regimen, including evidence that human growth hormone, one of the most effective steroids on the planet, is naturally released by the human body during fasting. And this schedule appears to increase lifespan in mice.

Human children, however, are clearly not mice. My dad used to make me eggs every morning before school, and three meals a day wasn't even enough. Alas, we change as we age, and so do the rules of breakfast. More nuance is required when advising the 18 to 118 age group. And the first rule of the breakfast club should be listen to your own gut, which tells me to wait a while.

You can have a burger and a beer for breakfast if you want, or pasta with wine. Rich food with a sharp beverage is tasty at any time of day. But if you want to call it breakfast, it needs to be served with coffee. And if you want me to eat it, breakfast should contain eggs, and stuff. And the reality is, if we have eggs and coffee we have grease. I'm OK with that.

Because breakfast is such a personal thing, here is a greasy breakfast recipe for one. At least I can eat it by myself. I make it with multiple sources of fat, including bacon, olive oil and butter, because I like redundancy in recipes. But if you are really into a certain oil or mix of oils for your eggs, that's fine. I'm not gonna go screw up your breakfast. My dad taught me better than that.

My greasy breakfast can incorporate 'most any seasonal vegetable, including potatoes, Brussels sprouts or broccoli. For today's version I'm using thin rounds of delicata squash, including the skin and seeds, which cook in the hot grease alongside the other stuff. In addition, every once in a while, breakfast will coincide with a bag of corn chips being finished, and when available I like to use the crumbs at the bottom of the bag, called migas. Today was one of those days.

Instructions
Add bacon, oil and butter to a pan and cook on medium to release the grease. Meanwhile, mix the eggs with a tablespoon of water. Swat the clove of garlic with the flat of the knife, about two inches from the tip, like you're killing a spider with a flip-flop. Put the battered remains of the clove in the hot grease, where it will persist in a state of half-spice, half-vegetable. Turn the heat to medium-low and fill the pan with squash rings, rearranging the pan as necessary to accommodate as many rings as possible.

Cook like this until the bottoms of the rings are brown, about 10 minutes, and flip them. If using migas, scatter them atop the whole business.

After about five minutes, turn the heat up to high, stirring the pan as necessary so nothing burns and everything heats up and stays coated by hot grease. Pour in the beaten eggs and twist the pan around until as much egg is in contact with as much hot pan and its contents as possible. With as few strokes as possible, stir/toss/flip the contents until all of the egg is exposed to heat, but is not overcooked. Remove from the heat and serve with salsa or hot sauce, and mayonnaise.

And coffee, to make it officially breakfast.