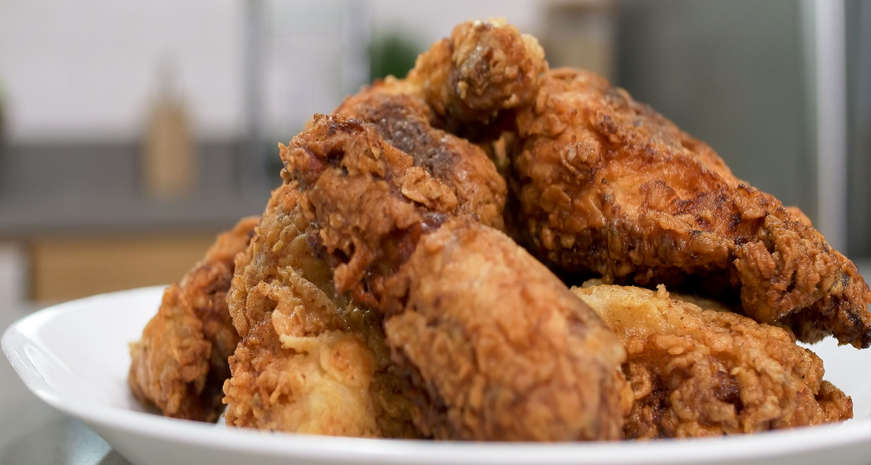 Let’s face it: fried foods are generally terrible when eaten cold. The mealy, cardboard-like texture of cold french fries and the wet tissue paper texture of refrigerated shrimp tempura are bad enough to make anyone think twice about allowing anything fried to cool off. With this idea in mind, why is cold fried chicken so … amazing?

Cold fried chicken as a meal likely took origin as room temperature fried chicken, as people were frying chicken in the South long before home refrigeration existed. Once folks discovered that the crispy bird was not only edible, but also desirable, several hours after leaving its hot oil bath, fried chicken started to become a popular centerpiece of picnics and church luncheons throughout the South. As refrigeration gained popularity, the chicken migrated from being stored on the counter top to cooling down in the ice box. Those who eschewed heating up their chilled chicken in favor of chowing down right away would have seen how the chicken’s breading remained crisp while the interior deepened in flavor.

When fried chicken starts to cool down, the skin contracts and bonds itself to the meat. This process causes the top part of the skin to separate slightly from the crust, which prevents moisture absorption and sogginess, allowing the breading to maintain its satisfying chomp. Also, as the steam escapes the chicken, the moisture loss results in meat with greater density and a more pronounced “chicken-y” flavor. Pulled from the bones, this meat is delicious on a sandwich, especially when turned into chicken salad.

Perhaps the best setting for serving up cold fried chicken is a hot summer picnic. First, cold food just tastes better with humidity hanging thick in the air: it’s as much a fundamental a truth as death and taxes. Second, the crispiness of the chicken just seems to pair so well with picnic staples, like creamy potato salad and snappy tomato and cucumber salad. The chicken can be fried (or purchased) the day before, then parked in the refrigerator and later stored in an ice chest with the rest of the food. No need for separate vessels or a heating apparatus at this picnic. For an added kitschy touch, buy disposable cardboard paint buckets from your nearby hardware store and serve your chicken just like the colonel, only tastier.