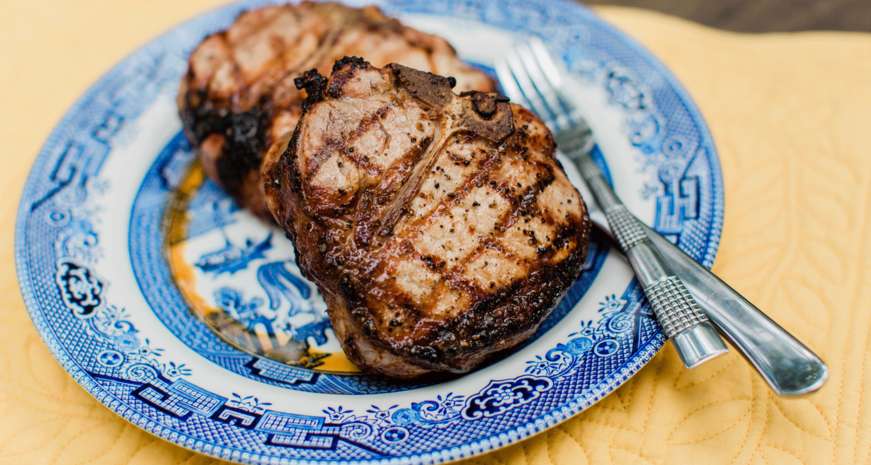 Why brining your meats and poultry makes them juicier and tastier

I’m sure we’ve all eaten a pork chop or chicken breast that was taken directly out of the packaging and given a perfunctory sprinkling of salt and pepper before being cooked in a pan, grill or oven. I’m equally sure that the results were less than stellar, and the lean meat’s texture (and likely flavor) could best be associated with sawdust. How can you ensure that your pork or poultry stays juicy throughout the cooking process? Use a brine.

Brining is a simple process: dunk your protein in a salty solution for several hours before cooking. With the exception of my Thanksgiving turkey (a story for another day), I brine nearly all of my proteins: pork tenderloins and chops, ribs, chicken and sometimes, even shrimp. The brine allows the meat to absorb additional water, which it would otherwise lose during heat transfer. Less water loss from the meat means *drumroll, please* the meat stays juicier!

At this point, the meat has not lost any mass, so it’s simply absorbing more water weight—nearly 1.5 ounces. When heat is applied to the meat, it causes the destruction of cell membranes, which means moisture loss. (Think about that any time someone asserts that searing meat “locks in the juices.") Brining prevents nearly 30 to 40 percent of total moisture loss.

Making a basic brine
Now that we know how brining benefits the meat, let’s examine the components. At its core, a brine is a solution of salt dissolved in water. The most important part is the concentration; too much salt will actually pull water out of the meat, while too little salt slows the absorption rate. Ideally, a brine should have a salt concentration of five to eight percent of the weight of the water in the solution. Using a scale to weigh out the salt is the most accurate method; however, using a ratio of 4 tablespoons of salt per quart of water (or, for a larger batch, 1 cup of salt per gallon of water), you can achieve the desired concentration. To dissolve the salt, place it in a pot with half of the water. Simmer and whisk until the salt has dissolved, then use a scale to weigh out the remaining water weight in the form of ice. Add the ice to the hot liquid to cool it down and dilute it to the proper concentration. It should be a given, but pouring a warm brine over your chicken or pork will start the cooking process. Cold liquids only, please.

Once you have the salt-water solution down, feel free to customize the flavors in your brine. Perhaps the most common addition is sugar, which serves two important functions in a brine. First, sugar softens the effect of the salt on taste, leading to a more rounded flavor in the meat. Additionally, the sugar aids in browning when heat is applied. Depending on your final flavor preferences, sugar can enter a brine in the form of granulated or brown sugar, honey, molasses, corn syrup or even sweet tea.

Don’t miss out on the opportunity to infuse your brine with aromatics for additional flavor. Garlic cloves, chopped onion, whole peppercorns, fresh thyme and bay leaves are all frequent brine fodder. I’ve also seen fresh and dried chiles, cinnamon sticks, coriander and mustard seeds make an appearance in a brine. A word of caution here, avoid adding acidic ingredients, such as citrus, cider or vinegar. The acid denatures the proteins far too quickly, resulting in this weird, meat “ceviche” sort of science experiment. Think of a salt brine as causing the protein bundles in the meat fibers to calmly unwind, as if getting out of bed on a normal day. Adding acid to the party is the denatured protein equivalent of getting a glass of ice-cold water to the face. Stick to the salt water.

The necessary time for a brine to work its magic depends on the size of the meat or poultry being brined. For example, a simple pork chop or chicken breast might only need between four and eight hours, while a whole brisket for corned beef might take at least seven days. Since most of us aren’t going to open a home deli (though mad props if you do), eight hours or overnight seems to be the magic window.

Interested in trying out brining for yourself? We've got a few recipes to get you started: