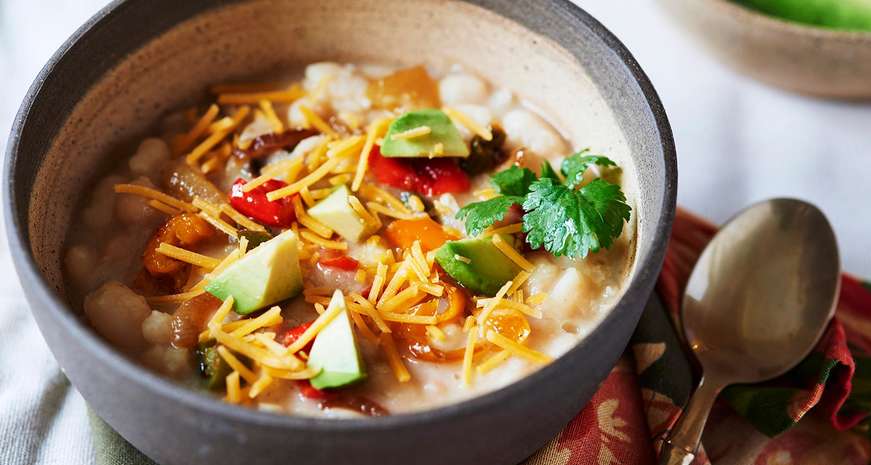 White Bean Chili isn’t actually Southern but we perfected it

Where would you say white chicken chili was created if you had to guess? In this edition of her Taste of a Place column, Anne Byrn discovers the truth and gives soul-warming tips to make it slow or fast.

Unlike heirloom Southern recipes your family has made for generations, there are some whose origins are not so easy to pinpoint. Take white bean chili: It's popular, seems like it's been simmering in the South forever and is loved by Southerners from Texas to the Carolinas.

But it's not really Southern.

Don’t tell that to any of us who make it by the gallons each winter, right on time for the Super Bowl. We use great northern or navy beans. We use chicken or turkey. We keep the ingredients all white, or make it colorful from the avocado, tortilla chips, cilantro and cheese piled on top.

I remember the first batch of white bean chili that I made. It was all-white from the great northerns to the chopped chicken breast, to the cream I poured in to thicken things up late in the recipe. And it was rich, filling and divine.

As the years have passed, my chili recipe tinkering has continued. The cream exited, chicken broth entered the picture and I took a whole lotta license with the recipe. I added peppers for color, snuck in green chilies for heat, and when too lazy to cook, I’ve simmered the chili all day in a slow cooker. 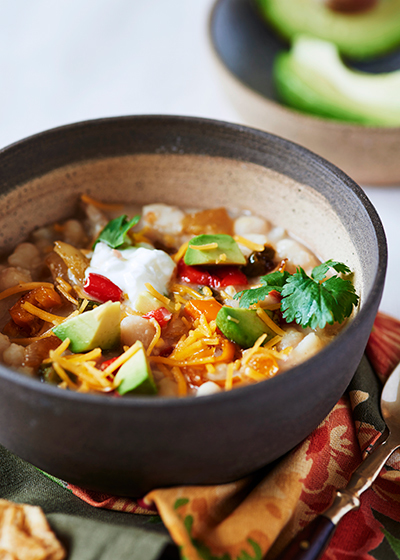 This question doesn't keep me up at night, but I have wondered when this neutral canvas chili came onto the stage. So I did a little snooping through my Texas cookbooks, Southern regional cookbooks, and old newspapers. And I discovered white bean chili is a relatively recent addition to our kitchen.

The late Mary Faulk Koock, longtime caterer and author of the legendary 1965 The Texas Cookbook, shares two chili recipes in her book, and both contain beef. Lyndon Johnson suggested chili become the state food of Texas — beef chili, that is — and the first chili cook-off took place in remote Terlingua, Texas, in 1967.

Chili was a Texas food, not Mexican, first sold on the square of San Antonio in the late 1800s. The word comes from the Spanish chile con carne, meaning "pepper with meat."

Breaking these hard and fast chili-making rules would take time. The first white chili surfaced out West in the late 1980s, where it was seen as an example of a new brand of Southwestern cooking.

The late Michael Roberts, the adventuresome chef of a Los Angeles restaurant called Trumps [ed. note: no relation] made headlines when he combined duck with white bean chili for a Southwestern take on French cassoulet. And as the 80s ended, food writers saw this new white chili as a fresh and much-needed departure from the heavy red meat version.

While bean chili was new. It turned heads and was a sophisticated way to make chili for guests. It has been embraced by Southern cooks because everyone loves chili, and who didn't like the idea of adding chicken? And it was a huge hit in Texas, just like it was everywhere else.

The first recipes — and probably the best — were the ones in which you cooked your own whole chicken or bone-in chicken breasts in seasoned water until done. You used that broth to cook your white beans, but only after you had soaked the beans overnight in cold water or did a quick soak by pouring boiling water over the dried beans and let them plump up for an hour, before draining, rinsing, and then cooking to doneness.

Nowadays there are all sorts of short-cuts to make white bean chili. Begin with cooked chicken from a supermarket-roasted bird and use canned white beans and you slash the prep time by hours. Pull the recipe together and pour the ingredients into a slow cooker, and you can let the chili simmer most of the day while you clean the house and get ready for the party. Or, for weekdays while you are at work, white bean chili in a slow cooker allows you to come home to a kitchen perfumed with the zesty aromas of the Southwest.

My White Bean Chili Isn't Your White Bean Chili
What I love about cooking and repeating recipes through the years is that you can adapt them to suit your changing tastes and family dynamics. That's how I cook, especially when I’m cooking white chili.

When my children were young and running mad through the kitchen, I relied on the last-minute ease of canned white beans and pre-cooked chicken. But these days, as an empty-nester, I have more time to cook the beans from scratch, and I often stash the cooked beans in the freezer, read to thaw for soups and chilis. Then I'll cook my own bone-in chicken breasts, and use the broth in the chili recipe. And if I find some exotic new pepper I’ll toss it in the pot.

I've seen while chili garnished with slivers of fresh radishes for crunch. I've topped it with shredded cheddar or crumbled queso fresco. And I'd be happy to pile a salad of garnish on top: arugula, cilantro, tomatoes, avocado, red onion, a squeeze of lime juice, a drizzle of olive oil — that kind of magic. That way I can eat that bowl of chili and be guilt-free. 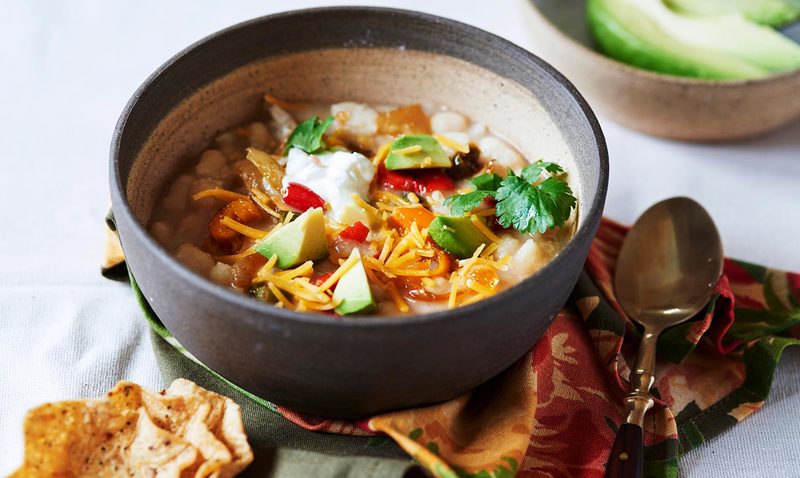 And honestly, who cares if white bean chili was born in Los Angeles and isn't a Southern native? I adopted it a long time ago.

Instructions
Heat the olive oil in a large skillet over medium heat. When the oil is shimmering, add the onion, celery, garlic and bell peppers, if using. Cook, stirring frequently, until the vegetables soften, 5 to 7 minutes. Remove from the heat and stir in the chicken and green chilies, if using.

In a large pot, combine the beans, chicken broth, cumin, oregano, cayenne and enough water to fill an empty can of beans. Stir in the onion and chicken mixture and place over medium-high heat. Cook, stirring occasionally, until the mixture comes to a boil. Reduce the heat to low, cover, and let simmer until the chili thickens, 35 to 40 minutes.

Season to taste with salt, pepper, cumin and cayenne. Ladle into bowls and serve with toppings.