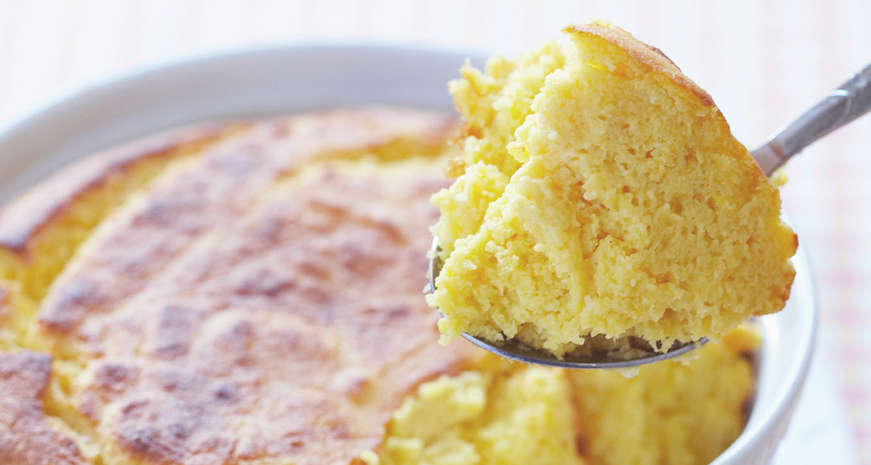 No matter how you make it, spoonbread is truly the most Southern of souffles

Get schooled in Southern spoonbread with our look at the history of the dish, and then take this lesson into the kitchen with two recipes — one a stunning take on a classic recipe, and another a garlic- and greens-filled twist.

Though spoonbread is little known in most corners of the world — and is even fading in some parts of the South — it remains a beloved classic for many families whose recipes date back generations. Some say spoonbread, which is more like a cornbread souffle with bread-pudding consistency than actual bread, dates back to the 1700s, when local settlers adopted and adapted the Native American tradition in their kitchens.

The late Atlanta-born journalist John Egerton sang the praises of this “feather-light dish” in his 1987 book Southern Food. “Tracing the evolution of cornbread from suppone (Indian corn) to spoonbread is in some ways similar to studying history through fossils and other artifacts,” he wrote, as noted by the Los Angeles Times. “There is a rough parallel in these recipes with the social and cultural movement of people through history. A properly prepared dish of spoonbread can be taken as continued testimony to the perfectibility of humankind.

Whether or not Egerton got a little carried away using such warm praise in his prose, spoonbread can indeed be the perfect complement to any Southern feast, and the residents of Berea County, Kentucky, surely agree. For two decades the community has put together an annual Spoonbread Festival, marketed as the “signature event of the Berea Chamber of Commerce.” Organizers boast that the 2015 edition welcomed some 60,000 spoonbread fans. 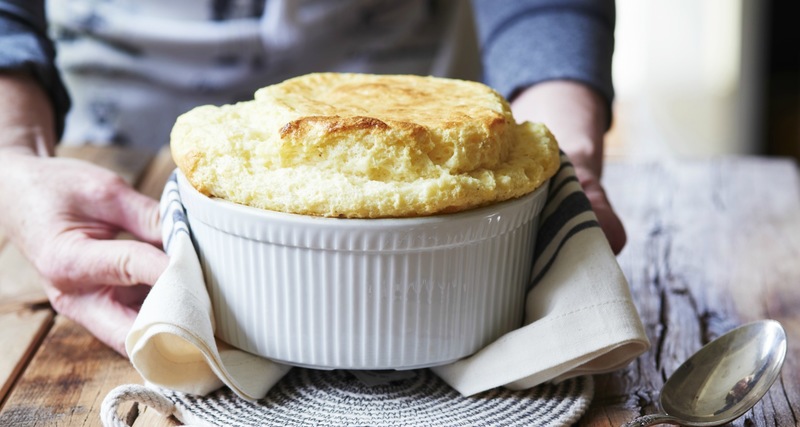 It’s probably an event well-worth attending, but fortunately you don’t have to travel all the way to Kentucky for a taste. By following a few simple steps, you can bake your own right at home.

For your first taste of spoonbread, we recommend sampling Anne Byrn's classic recipe. She pares back on the mix-ins and sticks with only what's necessary for an ethereally light, souffle-like dish. The only leavening is egg whites, which are folded in to a cornmeal, milk and egg yolk mixture. Our advice? Get the rest of your dinner ready before you pop this baby in the oven. And do make sure to spoon into it straight from the oven. One bite, and you’ll see why cooks have revered it, and why historians have waxed poetic about it.
Learn more about Anne Byrn's spoonbread
Get the recipe

Once you've mastered the classic technique, move on to this variation, which is full of ham and garlicky greens. Serve it as a side dish at as part of a weeknight dinner or for Sunday brunch and you'll certainly appreciate how this comfort food favorite has stood the test of time.

In a large pot of boiling salted water, cook the greens until just tender, 5 to 7 minutes. Drain thoroughly, pressing out as much liquid as possible. Transfer to a cutting board and coarsely chop.

Melt the butter in a large skillet. Add the ham, garlic and greens and cook over medium heat until the garlic softens, 3 to 4 minutes. Spread the mixture in the bottom of the prepared dish.

In a medium saucepan, bring 2 cups of water to a boil. Gradually whisk in the cornmeal and salt. Cook over medium heat — whisking almost constantly — until the mixture is very thick, begins to form a ball and pulls away from the sides of the pan, about 5 minutes. Remove from heat and whisk in the buttermilk, cheese and hot sauce, followed by the egg yolks.

Using an electric mixer in a large bowl, beat the four egg whites until stiff but not dry. Stir 1/3 of the whites into the cornmeal mixture to lighten it, then fold in the remaining whites. Spoon the batter over the greens and bake until puffed and lightly browned on top, 45 to 50 minutes. The spoon bread should be soft in the center and crusty around the edges. Serve immediately.