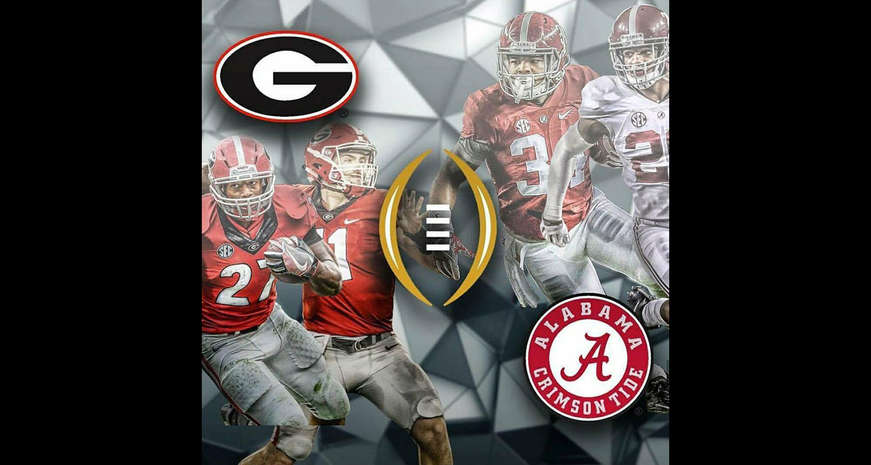 The Georgia Bulldogs and the Alabama Crimson Tide will go head-to-head on Monday in the college football National Championship. Fans are flooding into Atlanta for Monday night’s game, but if you can’t make it to Mercedes-Benz Stadium there are plenty of places across the South where you can watch it. Even though the game is on Monday, the festivities are kicking off this weekend with food, beer and entertainment.

For a rowdy-good time *almost* as good as going to the actual game, here are our suggestions.

Tailgating and pre-game celebrations
Downtown Atlanta will be alive all weekend with free concerts and tailgating celebrations. On Sunday, fans can head to the Georgia Aquarium for a day filled of delicious bites and drinks from some of Atlanta’s best restaurants during Taste of the Championship. The real fun begins on Saturday and will continue through Monday night after the winning team gets the trophy.

Fans can kick off the tailgating fun at the Championship Tailgate Plaza, held near Mercedes-Benz Stadium at International Plaza. Free-fall stunt jumps, zip-lines and more outdoor activities await fans who head there this weekend. On Monday, Tailgatehouse will be hosting the National Championship Tailgate and Viewing Party, which begins at 2 p.m., and goes until the game clock expires.

During the game
If you’re lucky enough to see the game at Mercedes-Benz Stadium, there are plenty of yummy food and drink options to keep you full throughout the game. Check out the AJC’s Mercedes-Benz Stadium food guide for the venue locations of Atlanta favorites like Farm Burger, Fox Bros. Bar-B-Q and Chick-fil-A.

Atlanta, Georgia
Pauley’s Crepe bar in Atanta: A favorite for crepes and drinks in Athens also has a second location in Atlanta. The Atlanta location will be hosting a National Championship Watch Party beginning at 4 p.m. The tables are first-come-first-served, so get there early if you want to grab a seat for the whole game.

The Arena Tavern: This sports bar in Duluth is a UGA fan favorite. With over 70 flat screens and local beers from Terrapin, Sweetwater and Jekyll on tap, this is a great spot to watch the National Championship.

Atlanta Braves All Star Grill: Don’t let the Braves memorabilia confuse you. This bar and grill is a self-proclaimed “Dawg Den.” Cheer on UGA and don’t miss out on any of the action of the National Championship this Monday.

HobNob Neighborhood Tavern: “Both the Brookhaven and Midtown locations will throw parties. A full lineup of game-day faves, including shots, festive cocktails and craft brews, will be available for fans as they cheer on the teams,” according to the AJC.

Smokebelly BBQ: “Order a rack of ribs and a basket of 50-cent wings at this barbecue joint. The restaurant will have all of your game-day needs, from a ton of drink deals to 14 TVs for the ultimate watch party experience,” reported the AJC.

Charleston, South Carolina
UGA fans in Charleston: put on your red and black, and head to Home Team BBQ to watch the game with spirited Georgia fans and alumni. Make sure to try the dry-rubbed wings and frozen Game Changers if you go. UGA fans can also catch the game at Bay Street Biergarten, which “has so many televisions that it’s impossible to miss any of the moves,” according to Eater.

Athens, Georgia
As the home of UGA, Athens will be celebrating with watch parties and National Championship celebrations. UGA fans can head to Terrapin Beer Co. for a viewing party with Athens beer flowing. Blind Pig Tavern isn’t hosting an official watch party, but the game will be on at all three of its locations in Athens. At the Georgia Theatre, fans can come and cheer on the Bulldogs in a celebration that has no cover charge and begins at 3 p.m.

Tuscaloosa, Alabama
-The Houndstooth: Named as one of the best Southern bars by Garden and Gun in 2012 and #14 sports bar in the nation by Sports Illustrated, The Houndstooth is the perfect spot to watch the game on Monday night. The bar has so many TV’s that you won’t miss any action even when you go to the bathroom (yes, they even have TVs in the restrooms).

-Gallettes: This legendary bar has been a Crimson Tide favorite to drink and watch Alabama football games for the past 40 years. Make sure to try their signature drink, the Yellowhammer, while you’re watching the game.

Gulf Shores, Alabama
-Rafters Restaurant & Sports Bar: The game will be on and the beer will be flowing on Monday night in Gulf Shores, Alabama. If you can’t make it to Atlanta, this bar offers a great spot to watch the game and enjoy waterfront views.

-Pink Pony Pub: Overlooking the gulf coast, the Pink Pony Pub is a beach bar, sports bar and favorite among locals. They love Alabama and you won’t be disappointed if you head there to watch the National Championship game.

- Baumhower's Restaurant across the state of Alabama: Having played under legendary Alabama coach Bear Bryant, Bob Baumhower knows football and how to set up a restaurant so everyone has a good seat for the game. The huge menu includes everything from wings to seafood to steaks and po-boys, according to AL.com.

New Orleans
-The Rusty Nail: Located where the Warehouse District meets the Lower Garden, the Rusty Nail is a laid-back neighborhood bar. It is also a favorite spot for Alabama fans and graduates to drink beer and watch the Crimson Tide play ball. Head there Monday night for one of the best football atmospheres in NOLA. Oh, and did we mention that along with giant flat screen TVs, they have huge 86 inch projector screens that will also be showing the game.