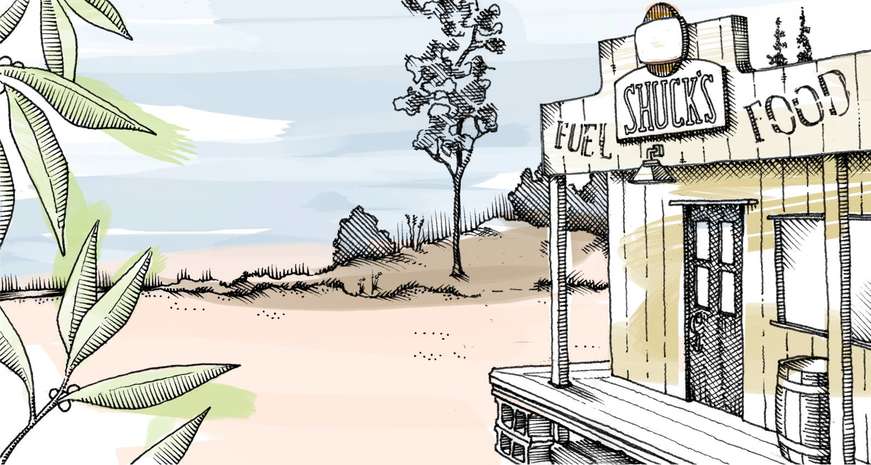 Some of the South’s most delicious dishes aren’t found in swanky restaurants favored by the James Beard Foundation and other esteemed culinary voices, nor are they restricted to grandma’s kitchen. Sometimes great food is found in places not even adventurous eaters think to look: gas stations and corner stores.

In the rural South of the 1800s, general stores were the original one-stop shops, offering everything from farm equipment to fresh produce. Some, outfitted with mailboxes, even served as post offices. It was a different era, when road trips were an essential part of life, not planned vacations.

As cars became more popular and affordable after the turn of the century, the stores added gas pumps, blurring the lines between grocery stores and fueling stations. Eventually, as society became automobile-dependent, gas stations even began cooking hot food.

For a while, institutions like these started becoming harder to find, with more big box stores and fast food restaurants opening not far from the exits along major Southern interstates and highways. Nowadays even major chains like QuikTrip are not only offering food, but in some cases are abandoning auto fuel altogether, in favor of serving hungry humans instead of thirsty SUV gas tanks.

But in some locations, gas station eateries remain some of the best places to discover surprisingly delicious regional dishes. For those on the go, or anyone who loves convenience and quality at a low cost, don’t miss these gas station and corner store delights as you tour the roads between Southern states. They’re great reminders that food doesn’t have to be served on a white tablecloth to be delicious. 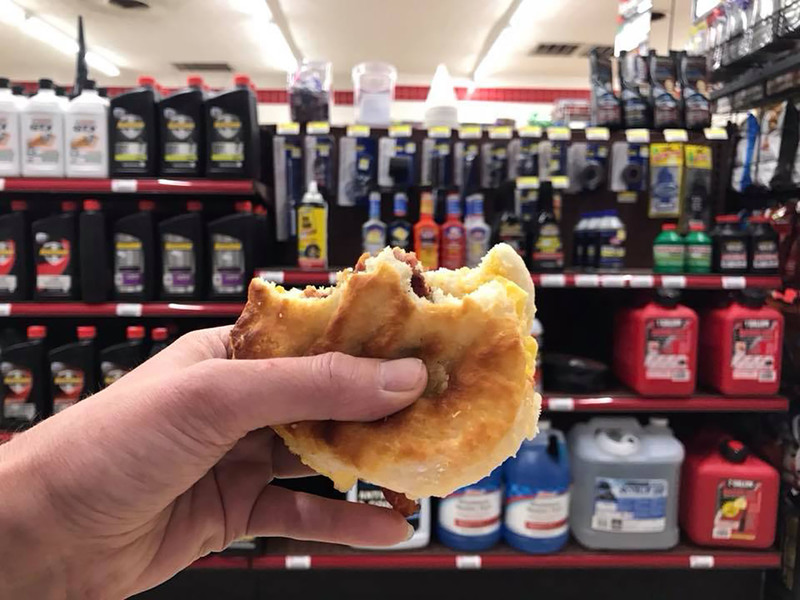 Bread Basket biscuits in Athens, Georgia
The more gas stations you drive past in the Peach State, the more likely you are to find parking lot stands selling fruit and boiled peanuts. Don’t forget to step inside; you might be in just the right place for amazing fried chicken or biscuits. Athens residents and well-informed visitors get their morning fix at Bread Basket, a gas station eatery in the Boulevard Historic District that is set up inside a Chevron station. The biscuits are made fresh daily and can be ordered with fried chicken, sausage, ham or butter. 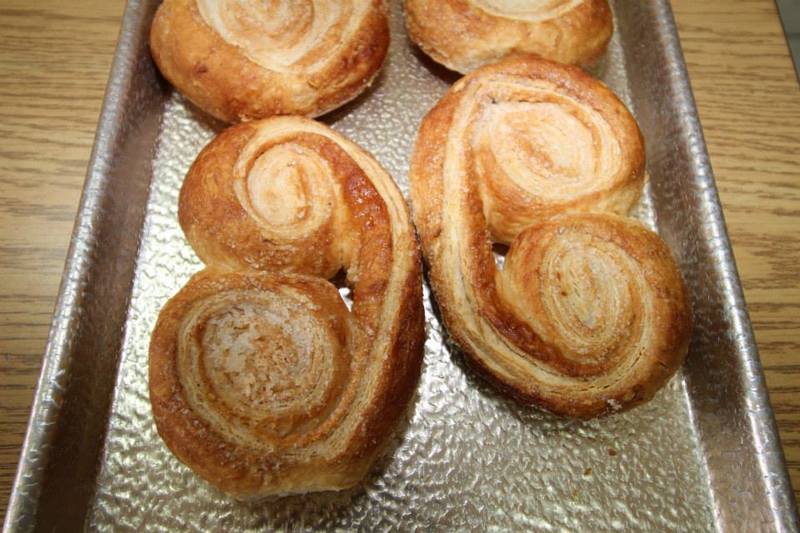 Delicias Bakery pastries and Cuban sandwiches in Lake Worth, Florida
In South Florida you’ll find Latin pastries, including pastelitos de carne or fruta. The puffy, shell-shaped handheld pies are perfect for road-trip consumption, and they come in savory and sweet-sour options like seasoned ground beef and cheese, and guava-pineapple. Also look for Delicias Bakery, located inside a suburban Lake Worth ExxonMobil station. Travelers stopping here can enjoy what may be the best Cuban sandwiches outside of Calle Ocho. 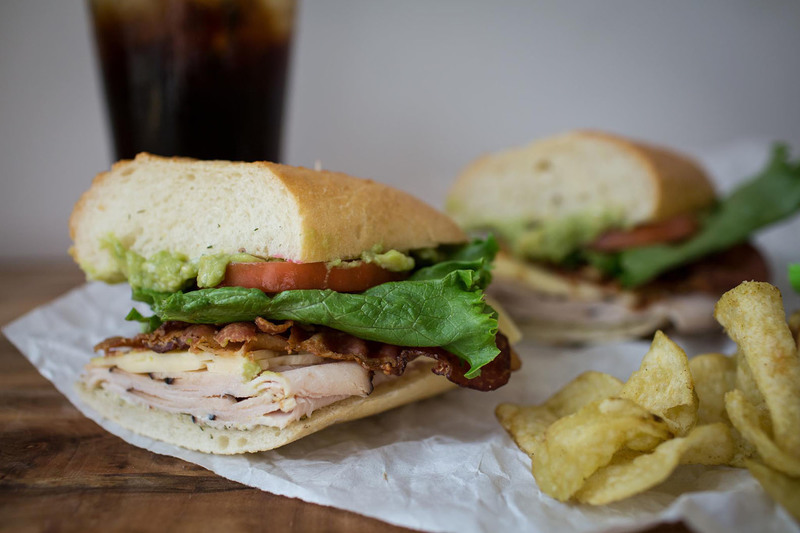 The Market at Bellair in Charlottesville, Virginia
Gourmet sandwiches in a Tiger Fuel gas station? You’ll thank us once you’ve tried one. Unlike other gas station sandwiches, diners at The Market can choose from sandwiches that are piled high with maple turkey, Cajun roast beef or smoked gouda, or you can create your own sandwich by selecting from a variety of high-end meats, cheeses and produce. Thrillist recommends sinking your teeth into the Batesville, a Cajun roast beef sandwich topped with smoked gouda, lettuce, tomato, onion, brown mustard and horseradish mayonnaise squeezed between slices of fresh whole grain ciabatta bread. 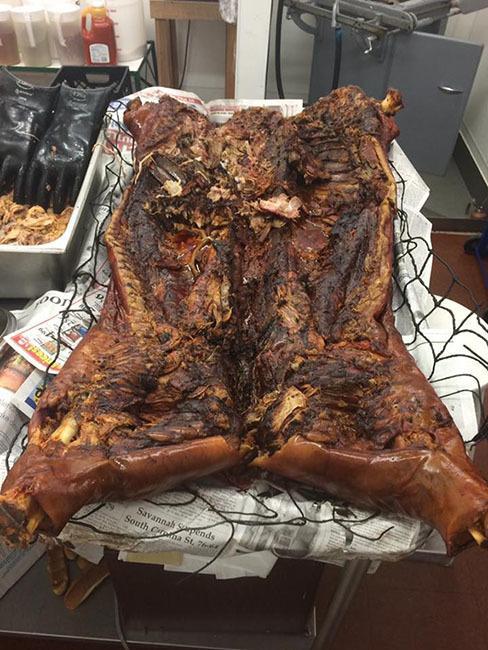 Pulled pork barbecue in Salters, South Carolina
In the battle of the pig, you must choose a side, or in this case a state. Just be careful which you say is better, and how loudly. Gas stations across the Carolinas offer pulled pork barbecue with variations of their famous mustard-based or tomato-vinegar sauces.

Cooper’s Country Store, located in an Exxon station in the unincorporated community of Salters, South Carolina, has served travelers on Highway 521 since 1937. Signs of long-closed companies hang on the wall alongside mounted deer heads.

We’re fine with both nostalgia and taxidermy, but it's the pulled pork sandwiches, cooked in vinegar with a hearty amount of pepper, that are worth the stop. Unlike the rest of the state, known for mustard sauces, Salters is in Williamsburg County, where a signature vinegar sauce was adopted by early Scottish settlers. 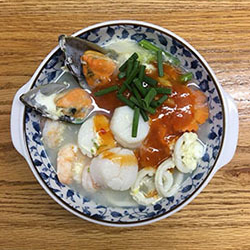 Blue Pacific at Hoover Food Mart in Birmingham, Alabama
While perusing the aisles of a convenience store or gas station for a snack, you probably are thinking about grabbing a bag of chips and a soda — but that’s not the case in Birmingham. Instead, when people head to Hoover Food Mart, they’ve got fried wontons, pad Thai and spicy coconut soup on their minds. That's right, at Blue Pacific, diners can expect to leave with a belly full of Thai food. “Owner Sam Aroon and his wife Pranchit use the recipes from Pranchit’s grandmother’s restaurant in Bangkok, Thailand, including the stir-fry dishes Rad Nah and Phat Si-Ew,” according to Southern Living. 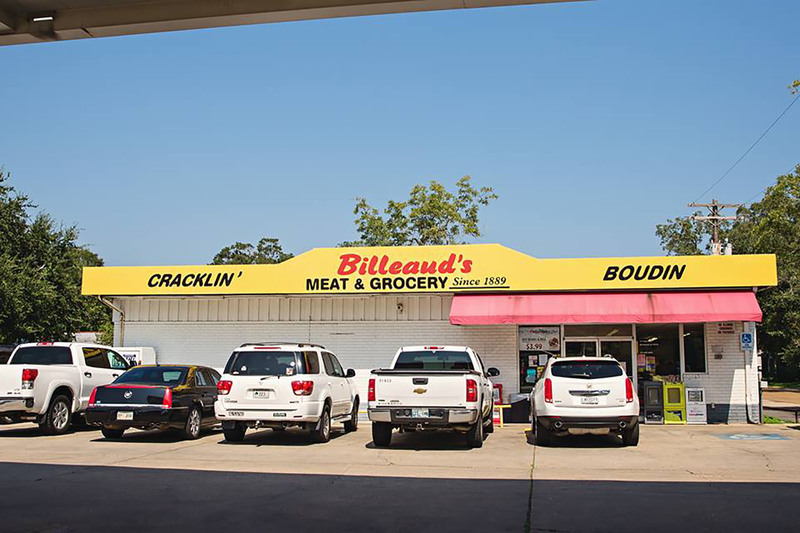 Boudin in Broussard, Louisiana
Some Louisiana gas stations double as Cajun meat markets, hawking a regional sausage called boudin. Sold by the casing or ball-shaped, the tasty sausage includes cuts of seasoned pork, liver and rice. It's best served hot and ready to eat, but you can also buy it frozen in vacuum-sealed bags to enjoy later. Billeaud’s Meat and Grocery, inside a Shell station in Broussard, offers portions of boudin, cracklin' and plate lunches. “The gas station meat market in Cajun country is the best place to buy boudin and cracklins,” said Louisiana food personality Jay Ducote, who also says the dish is “about as quintessential Louisiana as it gets.” 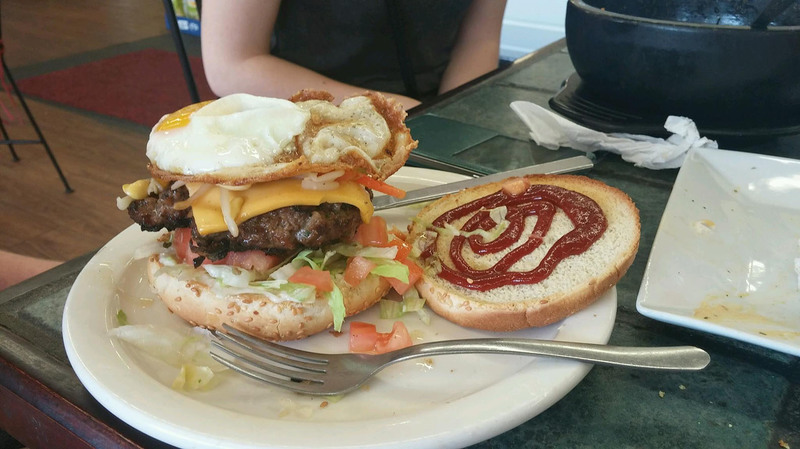 Kwik Chek in Memphis, Tennessee
Thanks to Kwik Chek, diners on the go can conveniently grab delicious Korean-Mediterranean cuisine after they’re done pumping gas. Located across from the famous Ardent Studios, which stars like James Taylor and R.E.M. once frequented, this gas station restaurant and convenience store deli offers sandwiches and dishes with a twist. Diners who are hungry for something other than fried chicken or barbecue can try the bibimbap burger, the kimchi burrito or a Mediterranean-inspired turkey pita. 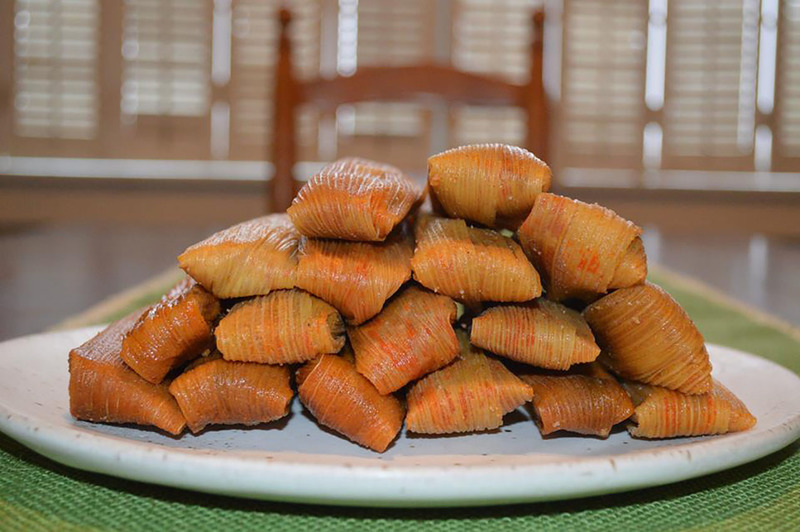 Mississippi Delta hot tamales in Cleveland, Mississippi
It’s hard to go wrong in Mississippi when it’s time for a meal. The state is known for creating signature versions of various dishes, but many consider Delta Fast Food, one of Cleveland’s favorite corner stores, to be the birthplace of the Delta hot tamale. The masa-covered seasoned beef dish has roots south of the U.S. border, arriving in the state via Mexican migrant workers. Modern Mississippi versions can be deep-fried or topped in chili.

“Over the decades, various cultures put their spin on the tamale until we had the hot tamale we love today,” said Anne Martin, author of Delta Hot Tamales and co-founder of the Delta Hot Tamale Festival in Greenville, Miss. “And what better place to find this perfect, portable food than at a gas station? You grab a bundle, and a lot of paper towels, and very carefully push that spicy goodness out of the corn shuck into your mouth.”

If you aren’t headed through Mississippi or any of the other states soon enough, use the recipe below to make one of the delicious pit-stop meals yourself.

Instructions
To make the filling: In a large, heavy pot, cover the meat with cold water and bring to a boil over high heat. Cover the pot, reduce the heat to medium-low and simmer until the meat is very tender, 2 to 2 1/2 hours. Using a slotted spoon, transfer the meat to a bowl and let cool. Reserve the cooking liquid.

When the meat is cool enough to handle, remove and discard any skin and large pieces of fat. Shred or dice the meat into small pieces. There should be about 14 to 16 cups.

In a large, heavy pot, heat the vegetable oil over medium heat. Stir in the chili powder, paprika, salt, onion powder, garlic powder, pepper, cayenne and cumin. Add the meat and stir to coat it with the oil and spices. Cook, stirring often, until the meat is warmed through, 7 to 10 minutes.

To make the tamales: While the meat is cooking, soak the husks in a large bowl or sink full of very warm water, until they are soft and pliable, about 2 hours. Gently separate the husks into single leaves, trying not to tear them. Wash off any dust and discard any corn silks. (Keep any husks that split to the side, since two small pieces can be overlapped and used as one.)

In a large bowl, stir together the masa, baking powder and salt. Add the lard and stir until well-blended.  Gradually stir in enough of the warm cooking liquid to make soft, spongy dough that is the consistency of thick mashed potatoes. The dough should be quite moist, but not wet. Cover the bowl with a damp cloth.

Remove a corn husk from the water, pat it dry, and lay it on a work surface. Spread about 1/4 cup of the dough in an even layer across the wide end of the husk to within 1 inch of the edges. Spoon about 1 tablespoon of the meat mixture in a line down the center of the dough. Roll the husk so that the dough surrounds the filling. Fold the bottom up to close and complete the package, leaving the other end open. Place the completed tamales in a single layer on a baking sheet. Repeat until all dough and filling is used.

Stand the tamales closed side-down in a large steamer basket. Cover the tamales with a damp towel or additional husks. Steam over simmering water until the dough is firm and pulls away from the husk easily and cleanly, 60 to 75 minutes. Serve warm.