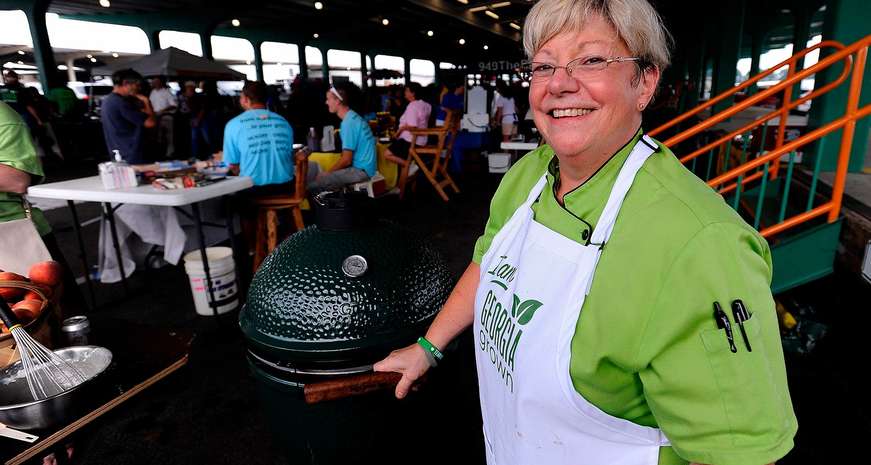 While preparing for one of several upcoming events promoting her favorite locally made producers and brands, she spoke about teaching state leaders how to flip their own eggs, how to make fried chicken that ends up becoming a Jeff Foxworthy joke (for good reason), and what it means for foods and crafts to be Georgia Grown.

Holly Chute has friends and fans in high places.

As the senior executive chef of Georgia Grown, a program started by the state’s Departments of Agriculture and Economic Development, her job is to promote locally grown and crafted products, and to help build community among Georgia’s farmers, retailers, consumers and everyone else in the economic farm-to-table pipeline.

It’s an important gig that demands someone who understands food before and beyond what happens in the kitchen, and who can educate and empower others. And it helps to have a recipe that can catch the attention of political power brokers in and outside the Peach State. That’s where her go-to dish — fried chicken — has historically come in handy.

“I’m kind of known for it. I brine it in local Georgia buttermilk with a hot sauce and kosher salt blend, and just season the self-rising flour,” Chute said. "It’s really simple and very subtle.”

It’s also obviously very good, because she spent 33 years as the executive chef at the Georgia Governor’s Mansion serving six governors, from George Busbee to Nathan Deal. It is said that her cooking is the one thing upon which Georgia democrats and republicans can consistently agree. 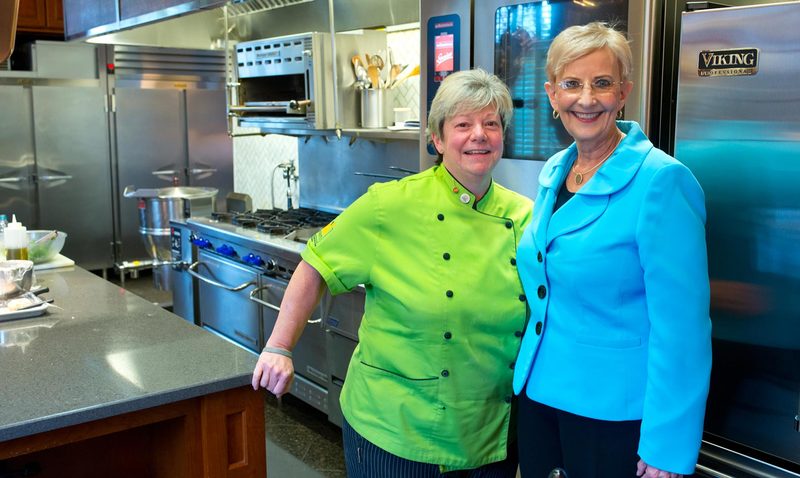 “We were entertaining people from all over the country and all over the world,” she said of her time in the Mansion’s kitchen. “Part of my job was being the ambassador for Georgia and showing the products we have. It became really important to explore and find products around the state that could really showcase what we have here, and to show that we’re not just fried chicken and greens. Not that that’s bad!”

Holding the position for so many years is something Chute recalls fondly, particularly special moments with Governor Busbee, who along with his wife, turned the New York native into an honorary Georgian. “When I moved down here, I’d never been to the South," she said. "I’d never made a biscuit, never cooked greens, never cooked peas. The First Lady took me to the Dekalb Farmers Market to show me all the different types of peas, and to kind of educate me.”

She also remembers the moment she became official: “They had biscuits every morning for breakfast. And when I finally made biscuits that were up to snuff, Governor Busby gave me a ‘Damn Yankee’ boarding pass, allowing me to stay ‘in the sovereign state of Georgia, but never a word is to be said against Rich’s, grits or Coca-Cola.’"

Governor Busbee trusted Chute enough to seek culinary advice from her, specifically how to properly flip an egg in a pan without using a spatula — a task he found difficult but wanted to learn. “It was kinda fun when he finally got the guts to do it not-over-the-sink," she said. "It was definitely not immediate, but he sure was proud of himself when he mastered it. The trick is making sure you have enough butter or whatever grease you’re using in the pan so that it slides easy. It’s all in the wrist; it’s just a quick flip, using your wrist to lift the pan and let it slide over. I prefer a smaller, individual pan that can hold just one or two eggs, with sloped sides. Preferably a nonstick but not necessarily; if you have a seasoned pan that’s fine, but nonstick certainly makes it easier.”

There’s also the time Governor Sonny Perdue hosted comedian Jeff Foxworthy for an outdoor cookout at the Mansion. Foxworthy enjoyed Chute’s fried chicken so much he told her it was the best he’d ever eaten. When she offered him a few extra pieces to take home, he politely declined at first, then succumbed and took the offer: “And one of his guys immediately piped up and said, ‘You know, you might be a redneck if you take a doggie bag home from the Governor’s Mansion.’ He uses that in his routine sometimes now." 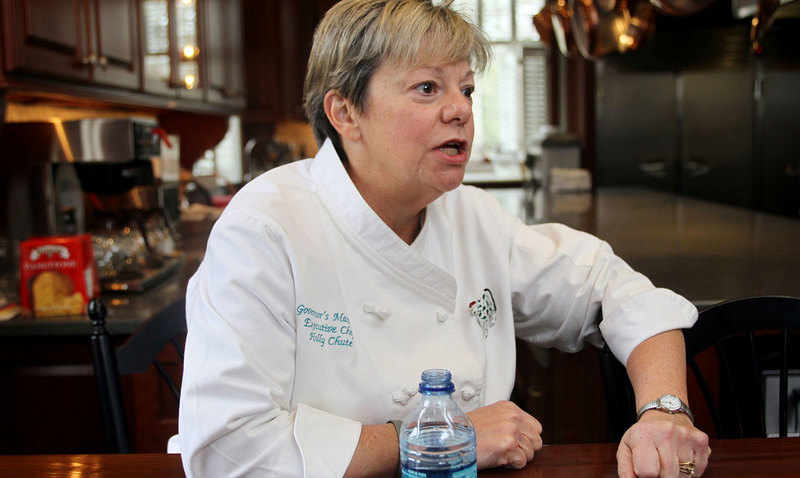 Such memories made the job fun and fulfilling, but after a certain amount of time, she realized she’d have to leave the position if she wanted to earn more money — state law limited her salary. But she also wanted to stay involved with Georgia food and the people who provide it. “So I told ... Governor [Deal], I love what I do, but I need to make more money," she said. "And he understood that — he’s the one who actually went to bat for me to get me more money. I’m very fortunate that being a woman didn’t come into play for that, because the governor knew what I was able to do.”

Chute is also the immediate past president of the Atlanta Chapter of Les Dames d'Escoffier, an international philanthropic organization of women in food service who raise money through events and fundraisers in order to provide scholarships and opportunities for young women who want to follow their food and beverage industry dreams.

“My situation is kinda unique,” she admitted. “I went basically out of culinary school straight to the Governor’s Mansion as the executive chef. I didn’t have a lot of these problems and issues a lot of women have in the kitchen, because I was running the kitchen from a very young age, learning my way as I went.”

But as an advocate for female chefs, Chute understands the difficulties they face in the restaurant business, even though her path was one that allowed her to avoid much of the muck. She believes women are finally beginning to get their due in the culinary field, but are still fighting for the levels of recognition men in aprons receive.

“I think the attention being brought to women is making a difference with how women are perceived in the kitchen," she said. "It’s tough being a woman in this business, even to this day. The lack of respect, between the cursing and the sexual harassment, and the mental abuse — it’s tough on women. Even if you have a bit of a sailor mouth, it’s too much. You’re considered one of the guys, but you’re not one of the guys. We do have to talk about it, until women are treated equally. And paid equally.” 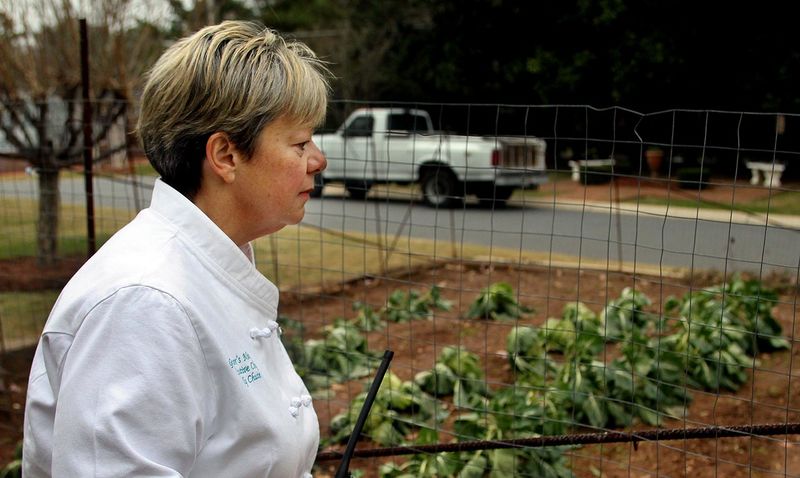 Equality is also important when it comes to putting Georgia products in reach of consumers. At Georgia Grown, she says one of her biggest missions is to help create access to food distribution: “We’ve got great artisan products and producers, but if they can’t get it to you, you can’t help them. If they can’t distribute their product because they’re on the farm growing or making their product, they’re not going to succeed. We’ve got some great companies helping with that: The Turnip Truck and Royal Food Service are great at sourcing locally and helping smaller farms. But farmers are still coming to the back doors of restaurants! That’s not sustainable. We’re still working on it.”

Chute says another roadblock is mainstream grocery stores not being open to carrying local products: “It’s not as important to them as it is to us in the state, trying to get our voices heard and trying to get the right people to make it a priority. They can make such a difference in getting local products to the public. While companies like Subway locally source in-season peppers and tomatoes. That’s huge for the farmers in state. So why can’t Kroger and Publix do that?”

Her advice? “Go to your individual grocers and ask for local products. Ask for Georgia Grown. Say, ‘You know, I shop here all the time, and I’m not seeing any Georgia Grown logos on your products, and they’re in season right now.’ If you get enough local demand, they’re going to have to respond.”

Without speaking up, Chute believes you’re missing out on some of Georgia’s most unique and delicious foods. That’s why she’s all about educating people about what they can get — sometimes exclusively — within the state: “I know they make shrimp and grits in other places, but I find some of the heritage grits we have in Georgia to be the best around. People don’t know that Georgia is one of the top producers of blueberries in the country. Pecan oil is also kind of native to Georgia, so it adds unique flavors to lots of things. Some of the salads you can make with pecan oil, or a piece of trout seared in pecan oil, you’re not going to find that elsewhere.” 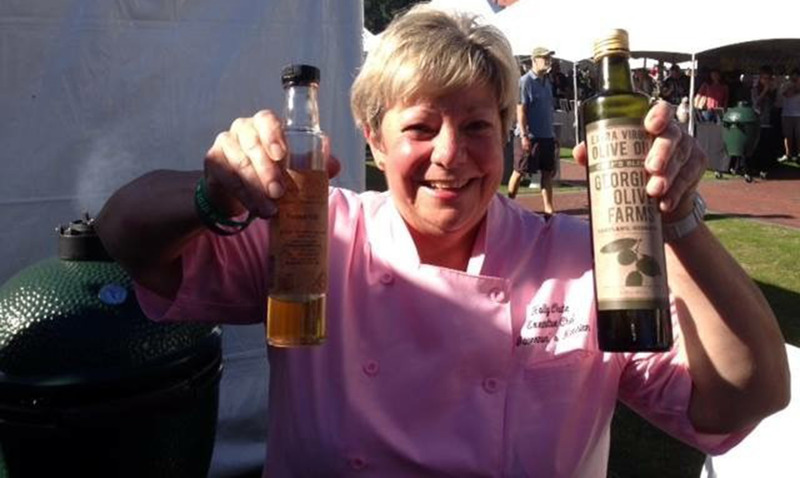 As for her favorite Georgia restaurants, she’s a fan of several in Atlanta, including Canoe, Saltyard, the Ford Fry restaurants King & Duke and No. 246, and always-top-rated Bacchanalia, but she said she'd be just fine with a burger from Hampton + Hudson. “If I’m down on the coast, The Farmer and The Larder, Halyards on St. Simons Island, or Cotton & Rye in Savannah," she said. "I haven’t been to The Grey yet, but that’s on my list.”

Yes, Holly Chute is all about spreading the news of all the great things growing in Georgia soil, and all the great folks bringing them to markets, bowls, plates and mouths everywhere within the state borders, and further. With upcoming travel plans that include France and Vermont, it’s a good guess that she’ll soon be sampling cheeses from elsewhere. But she'll surely keep Georgia on her mind as she roams.

“I consider myself a Southerner with New York roots," she said. "I’m bossy. I’m an extremely hard worker and will do whatever it takes to get the job done, and don’t mind working nights, weekends or whatever’s needed. And I say ‘yes’ way too often. But it’s just fun to show people how much is available here.”