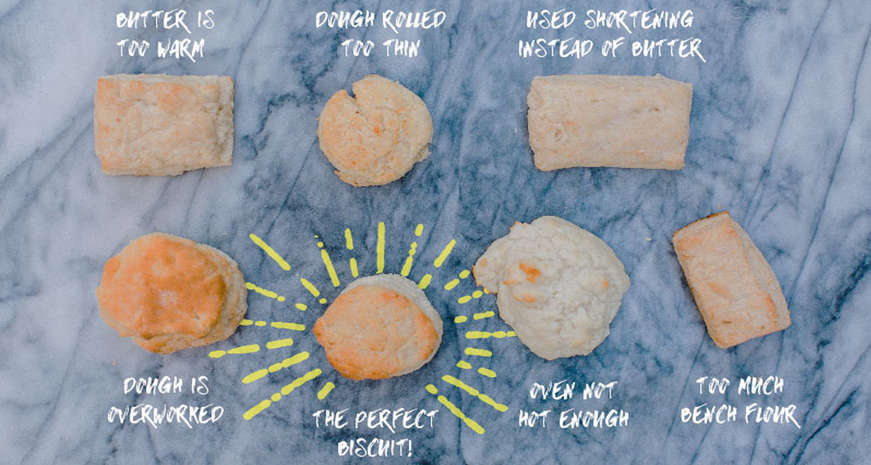 If there is a culinary sensory experience more comforting than a tray of hot biscuits emerging from the oven, I can’t think of it. Golden brown tops giving way to a fluffy, pillow-like center are a harbinger for breakfast (or dinner) nirvana.

Unfortunately, not all biscuit recipes are created equal and a few contain some fundamental flaws that may leave you with inferior biscuits. Don’t worry: we’ve taken the time to bake intentionally bad biscuits to illustrate some common baking pitfalls and how you can avoid them.

Bring the heat
When you pull a tray of biscuits from the oven and they seem not only under-risen, but are also sporting a Casper-like color on top, you can attribute that to the oven not being hot enough. While biscuits receive some leavening power from chemical sources — baking powder and baking soda — the difference between serviceable and greatness comes from the extra rise that steam provides. In order to generate steam, the oven must be set at a minimum of 425 degrees for at least 10 minutes prior to baking. The high heat causes the water in the butter and buttermilk to heat rapidly and release steam, pushing the dough upward. Ovens set to 350 or even 400 degrees heat too slowly and cause the fat inside the dough to melt before rising to the dough’s full potential. Finally, higher heat will generate more caramelization from the butter on top of the biscuits, leaving you with a beautifully golden crust.

Butter trumps shortening
Many older biscuit recipes call for hydrogenated fats, like shortening or lard, to be mixed with the flour prior to adding the buttermilk. The purpose of shortening is to “shorten” the gluten strands, thus providing tenderness in the biscuit. Unfortunately, Crisco also comes up short in the flavor department. While slightly more difficult to work with than shortening, butter provides biscuits with a beautiful richness and aids in that craveworthy exterior browning. If kept cold and not overmixed, you can also achieve a similar fluffiness with an all-butter biscuit as you would get out of one that only contains shortening.

Chill out
The best biscuits are assembled as quickly and efficiently as possible, primarily to preserve the cold temperatures of the butter and buttermilk. Much like a high oven temperature, having cold fat and liquid (and for some extremists, the flour and mixing bowl) will cause steam to build and the dough will rise even higher. Start with your diced butter and measured buttermilk inside the refrigerator while you assemble your remaining biscuit ingredients. When cutting the butter into the flour, remember that the heat from your hands can start to melt the butter. A creamy, emulsified flour-fat mixture will yield tough, dense biscuits; taller biscuits are typically lighter and fluffier. One way round this is to place the dry ingredients and butter in the food processor and pulse about 20 times, or until the butter has been cut into pellet-sized pieces. For an extra layer of safety, punch out your biscuits onto a baking sheet, then refrigerate the entire sheet for 10 to 15 minutes before transferring to the oven. 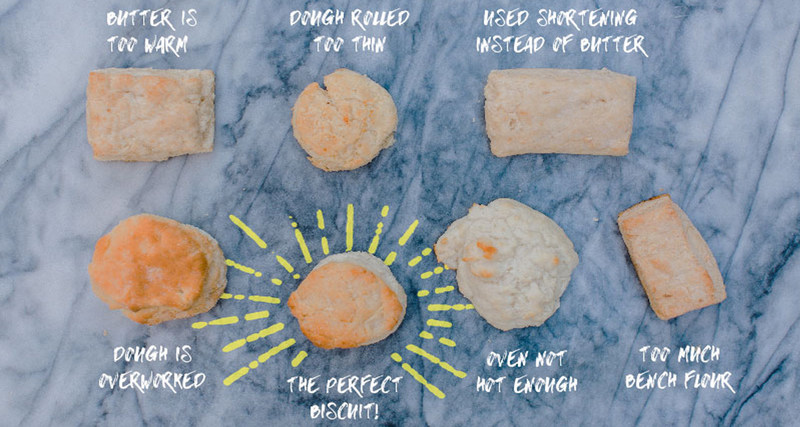 Keep a light touch with the dough
By nature, biscuits are a quickbread, which benefit from as little gluten development as possible. Gluten occurs when the proteins — gliadin and glutenin — combine with a liquid and swell to form an elastic dough. While this elasticity and “chew” are wonderful in a French baguette, we crave tenderness in our biscuits, which means that the key to successful biscuits lies in working the dough as little as possible. Your hands or a plastic bench scraper are the best tools to use for the job; do not use a mixer on your biscuits. Make light, but deliberate strokes from the bottom of the bowl to the top, almost in a folding motion, to incorporate the buttermilk into the flour mixture. Once the excess flour has been absorbed, immediately turn the dough onto a lightly floured work surface. Proper rolled biscuit dough is usually a bit tacky, but not wet.

Easy on the bench flour
Once you’re ready to roll out the biscuit dough, take care not to cover your work surface with too much extra flour, commonly referred to as bench flour. While it’s certainly important to prevent the dough from sticking to your work surface, hands or rolling pin, too much bench flour can absorb into the dough. Biscuits made with too much bench flour are tough and leaden, like a sad, doughy hockey puck. You won’t likely be able to notice the difference upon first glance; however, the resistance from that first bite will tell the tale. Start with a four or five-finger pinch of flour and make short, choppy tosses onto your work surface, leaving the appearance of a light dusting of powder. Next, lightly flour your rolling pin away from the dough. You can always add more if you need it, but it’s more difficult to remove.

Don’t roll too thin
When using a rolling pin on your biscuit dough, keep in mind that most biscuits will rise only about 70 percent of their original size at best. Unless you crave thin biscuits (which can sometimes be dense), roll your dough no thinner than 3/4-inch, preferably a full inch. If you’re working with a round biscuit cutter, dip the cutter in a small amount of flour for traction and quickly punch out rounds of dough in one motion. Twisting the cutter in the dough will mash down some of the layers that would potentially provide a taller biscuit.

If you follow these six rules of the biscuit road, you should end up with perfectly perfect biscuits every time.