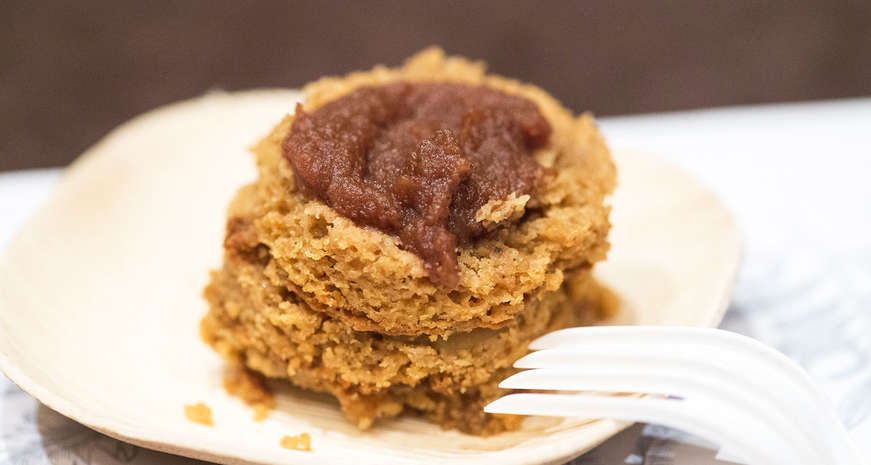 Chef Travis Milton is a celebrated Virginia-born chef who gained notoriety through his passionate advocacy for the preservation of Appalachian food and his time running the kitchen at Richmond restaurant Comfort. Along with sharing a recipe for the famous Appalachian apple stack cake, Milton talked to us about apples, family and why he’s opening three restaurants near his hometown.

“The apple stack cake is probably one of the most iconic foods of Appalachia, Milton said. “When I mention anything about Appalachian food, the connection point for people is almost always, ‘Oh! I’ve had apple stack cake.’”

Apples in central and southern Appalachia were big business up until the 1950s. Prohibition had already killed off cider and apple brandy production. Large-scale coal mining operations stripped the land and finally wiped out most of orchards which once flourished in the region -- a burden Appalachia has shouldered since the first wave of pioneers headed west into the mountains in the 18th century. This included Milton’s great-grandfather Wheatley, who years before had decided to get out of the apple-growing business and raise a family instead. It’s almost as if he knew this too wouldn’t last.

The region's abundant natural and agricultural resources have attracted settlers as well as outsiders for generations. Milton says these outside entities have, for decades, taken but rarely given back to the people tied by love and necessity to the land. Milton and several regional activists, including food writer Ronni Lundy and Chef Sheri Castle, hope to change Appalachia’s fate, starting with the humble apple.

The history of the apple orchards and their importance to the Appalachian people dates back to it earliest settlers, many of whom hailed from Germany, and Central and Eastern Europe. These roots are reflected in nearly every aspect of the culture, from songs to foodways. These settlers brought with them seeds and cuttings from their native lands, planting acres of apple orchards along with deep roots in the region.

In her book Victuals, Lundy dedicates an entire chapter to the apple and estimates at one point there were between “1,000 and 1,600 different varieties of apples” growing in the region of central and southern Appalachia. And those apples brought them money and nourishment. 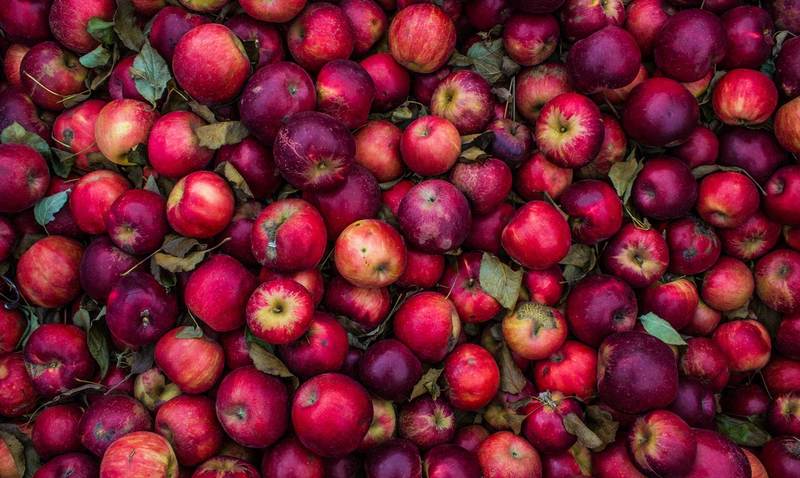 Milton says Virginia’s Wise County, where he was raised, was one of the largest apple-growing areas in the country, where people dried, preserved, and made cider and brandy from apples flourishing in the agreeable climate. His great-grandfather Wheatley once had an orchard in Hurricane, Virginia, which straddled the line between southwest Virginia and Kentucky, where his journey to bring back Appalachian apples begins.

“As a chef from Appalachia who grew up on apple stack cake, it’s one of those things I really have to nail in my kitchen. This cake may be all guests know of the region’s food,” Milton said. “I’m not big on doing plays on iconic dishes like this, but the more I dug into finding a recipe for the cake, the more I realized there really isn’t a definitive apple stack cake recipe.”

This information became invaluable in Milton’s research into the apples used, the recipes involved and in piecing together his family’s own recipes for the cake. The region’s landscape is constantly evolving and changing with the seasons -- an effect which inevitably trickles down to the crops and eventually food on the table.

Lack of money leads to one more unique regional characteristic: culinary creativity. “That’s something many people don’t realize about the beauty of Appalachian food: the amount of creativity involved in the recipes due to being strapped financially, and being so tied to the seasons and the land here,” Milton proudly stated. The apple stack cake, he said, is a perfect example of this, as the recipes were all born from creatively working around such challenges.

At its core, the apple stack cake is made from homemade apple butter or dried apples, and a variety of warm spices like cinnamon, ginger and clove. How these flavors and ingredients are achieved is where Appalachian ingenuity comes into play. Some use molasses as the sweetening agent to make their butter, while others use sorghum (often referred to as molasses in the region) and still others use dried apples to create the cake’s subtle sweetness. Milton’s family recipes utilize all three. When spices were scarce, his great-grandmother used Red Hots candy to provide cinnamon flavor..

Apple butter is the key to stack cake in Milton’s opinion. He uses a combination of Arkansas Black and dried Summer Rambo apples with Red Hots in his recipe. This, he says, is his addition to the story and to his family’s stack cake genealogy.

The stack cake usually consists of four to five thin layers which Milton says must sit out for a minimum of two to three days before finally assembling the cake. “When you let the cake sit out, the apple butter begins to separate when it warms up. Around the edges, the butter is a bit soupier and that seeps into the cake which makes it moist,” he says. “The thicker middle of the butter gets jammy as it sits out and makes almost a hidden layer. Letting the cakes sit out allows all of this chemistry to happen.”

It is for this reason Milton and many Appalachian food historians say the story behind everyone bringing a layer to the wedding or the party is just that -- a myth, like others in historical Southern culture, told as a way to hide an underlying truth. “The cake and many of our most iconic Southern dishes got romanticized to cover up the ugly parts about our foodways. Food writers and chefs are peeling that shiny layer back and are now telling the real story,” Milton stated frankly. “For the stack cake, people didn't want to tell the dirty truth of this being born out of simply being too poor.”

No one is certain of exactly where the cake’s recipe originates but Milton and Lundy’s research led them to believe it may be based off of an Eastern European torte, layered with jammy filling. As many of the original settlers in Appalachia were German, this makes sense. 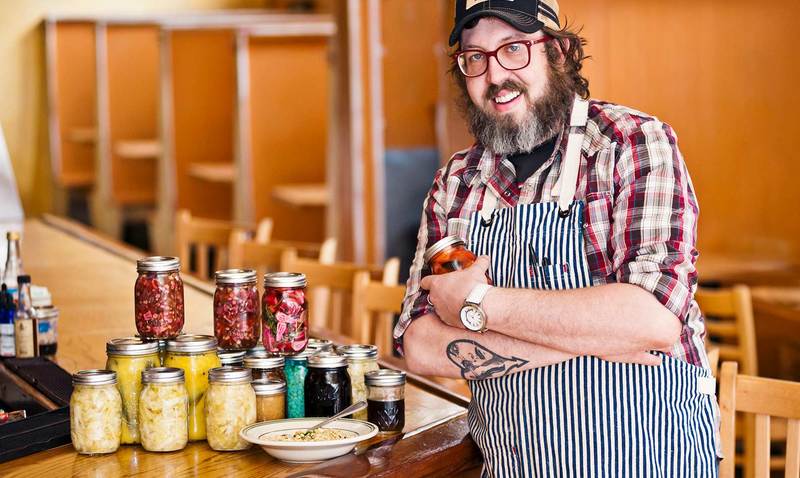 Milton said he’s glad to be back in Wise County. He said he decided to move home after realizing that opening a restaurant serving Appalachian food in Richmond (where he worked previously as a chef) wouldn’t benefit the actual region he wanted to help.

“I moved back here from Richmond because if I don’t have true access to the food and the farmers growing these crops, I might as well close down,” Milton said of his decision. “I’m putting the seeds I’ve saved from my family into the hands of the farmers here. I then plan to purchase the produce from them for my restaurants. It’s my way of supporting the community, to help achieve impactful development in the region.”

Milton plans to open three restaurants, which he admitted “was not the original plan.” They’re slated to open over the next year and will showcase Appalachian cooking in a variety of ways. Most importantly, two of his concepts will be accessible and affordable for local residents. The first will be Milton’s at the Western Front Hotel, scheduled to open in September in St. Paul, Virginia -- a tiny town of 800 people. The restaurant, located about a mile from where Milton grew up, will be a mash-up of barbecue and a meat-and-three, with a culinary concept based on familiarity and affordability, and utilizing heirloom ingredients like Turkey Craw and Tobacco Worm beans.

His flagship second restaurant, Shovel and Pick, will be located near the Tennessee border in Bristol, Virginia, and is due to open April 2018. Milton hopes to meld past and present in the cuisine, and to tell a more complete story of Appalachian foodways. Finally, his third restaurant, Simply Grand, will share space with Shovel and Pick in Bristol, and is projected to open the following June.

The building, an old flour factory, was home to a flour brand of the same name. Milton says it’s also a play on how he sees Appalachian food -- simple and unassuming while also beautiful. He said the concept will be accessible and “grandmotherly”, and he hopes it will remind guests of home.

As Milton drives between the three restaurants for meetings and discussions with farmers, he is simply happy to be back. Here, surrounded by the terroir which has given him and his family so many stories and recipes, is where he belongs, amongst the apples and his heritage.

This includes the apple stack cake, whose recipe is below and whose layers represent memories of apples in the kitchens of four generations of amazing Appalachian women. Call it his family tree on a plate.

Get the recipe for Chef Travis Milton's Apple Stack Cake