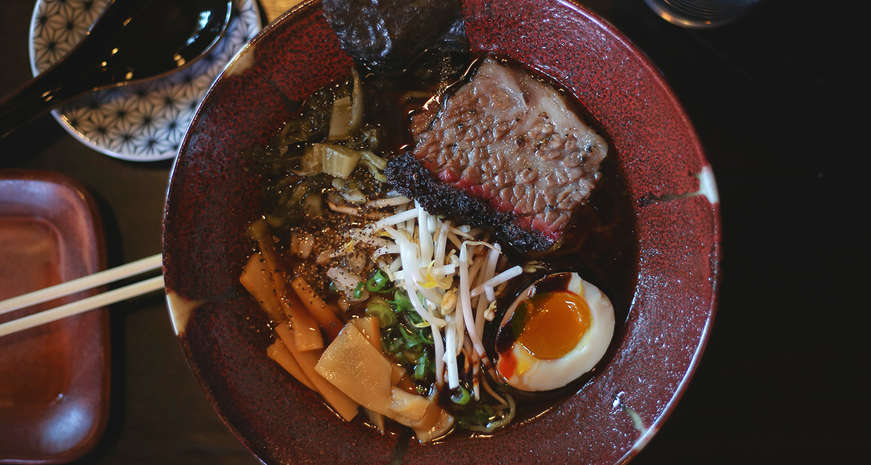 Uniting Texan and Japanese fare in a new Austin izakaya

Tatsu Aikawa has been a restaurateur for only four years, but the ideas he developed are informed by a lifetime of experience. Born in Japan, he moved to Austin, Texas, at age 10 and grew up to gain a unique culinary point of view with equal parts Japanese and Texan influence.

With his co-founder, Takuya “Tako” Matsumoto, Aikawa opened his first restaurant, Ramen Tatsu-Ya, out of opportunity and necessity. At the time in 2012, Austin lacked restaurants serving ramen from scratch, a dish both partners love. And though it was housed in a tiny strip mall, their ramen shop was an immediate smash. Long lines formed, extra kitchen space was rented to satisfy demand and a “Top 50 Best New Restaurant” nod from Bon Appétit magazine followed in 2013.

After scoring a runaway hit, the partners went for a markedly different follow-up: a restaurant in the mold of a Japanese-style izakaya gastropub. This new venture, Kemuri Tatsu-ya, blends Japanese pub food with smoked and grilled Texan cuisine, creating an innovative and modern take on both styles.

“My uncle owns an izakaya in the Tokyo neighborhood where we grew up,” said Aikawa. “You see the same people there every time — it’s like you never left. The food is your drinking buddy. It’s a different mind-set.” 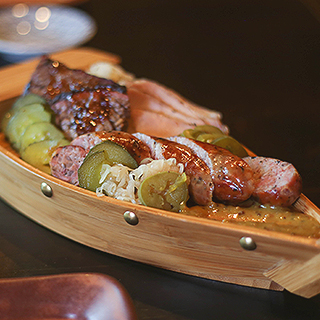 The idea to open Kemuri Tatsu-ya came about from research trips Aikawa and Matsumoto made to Japan while planning Ramen Tatsu-Ya. The two would stay with Aikawa’s relatives between train trips across the country and got to sample classic, Japanese dishes. The notion to serve them in Austin didn’t strike them until later during one of many visits they made to a Texas barbecue mecca.

“Tatsu’s mind moves really fast,” said Tako. “He’d been going to Lockhart, and he’d thought about doing a barbecue ramen shop there. The idea started as barbecue but evolved into an izakaya.”

When arriving at the idea of Kemuri, it’s clear the two founders expected popularity. The design includes a large front courtyard with a rickshaw-style drink cart, which serves beer and sake to help guests endure the sometimes-lengthy wait. Inside, traces of the venue’s former occupants (a well-liked barbecue joint) were retained and combined with Japanese accents. There are sake crates, Maneki-Neko good-luck cats and vintage Asahi beer signs interspersed with Big Red soda ads, Texas highway signs and taxidermy. The real draw, however, is the menu.

The smoked items at Kemuri show a broad range thanks to the usage of two smokers: one for the traditional red meats and another for seafood. The chefs employ the locally favored post oak on the expected dishes (brisket, pork and rice sausage) as well as the esoteric (smoked duck with orange ponzu, barbecue eel and mackerel). Aikawa’s market-price “BBQ boat,” a smoked meat sampler, is a star of the menu. 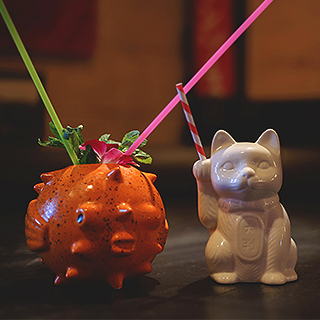 For more traditional Japanese grilling, they offer skewers of kushiyaki and yakitori. Chicken meatballs and the beef tongue are also crowd favorites, while more eclectic diners opt for the chili-cheese-topped takoyaki (octopus fritters with onion) or the gluttonous tofu “Hot Pocketz,” which are stuffed with gouda and brisket.

Since the izakaya ethos is based around both snacks and drinking, the founder brought in beverage director Michael Phillips, who developed a sterling reputation for complex cocktails during his tenure at Austin speakeasy Midnight Cowboy. Phillips has crafted a whimsical menu of cocktails, sake, shochu and whiskey, having fun with Texas-to-Tokyo ingredient combinations. One of his more inventive creations is the Evening Star, which pairs Texas gin with potato shochu, a hit of yuzu citrus and bianco vermouth. There’s also a Matcha Painkiller, which has a tiki-style laundry list of ingredients, including buckwheat shochu, blanco tequila, white rum, pineapple, coco cream and organic matcha tea.

New dishes are being added as the chefs master the menu. “We’re working on a fried pickle dish using fermented cucumbers,” said Aikawa. “When they get funky and sour, we fry them up and dip ‘em in ranch.” The dish is reflective of Kemuri’s ethos: While complex, flavorful and labor-intensive, the food is ultimately meant for fun snacking over drinks with friends. A true izakaya wouldn’t have it any other way.

Serves 6 as a side dish

Mix the rice bran with the hot water until it forms a paste, then mix in the garlic and chili flakes. Reserve in a deep nonmetal container. Rub down the English cucumbers with fine sea salt until they are nicely coated. Let them sit at room temperature for 15 minutes, then rinse under cold water and pat dry. Put them in the reserved rice bran paste, making sure to cover the cucumbers completely with the paste. Let this sit out at room temperature — with no direct sunlight — for about one week. Rotate it every day, mixing top to the bottom to ensure that everything is covered after mixing.

The nukazuke cucumbers should be ready after a week. Test one by slicing off a small piece and tasting. It should be sour with a bit of funk. If it's not funky enough, put it back into the rice bran. When ready, take out the cucumbers and wipe off the rice bran mixture. (You can save this for your next batch of nukazuke.) Rinse the pickled cucumbers under cold water and pat dry.

Take the dried cucumbers and slice them to your preferred thickness — we prefer 1/4-inch slices. Whisk flour, salt, togarashi and paprika together in a bowl. Whisk the buttermilk and eggs together in another bowl. Put the panko into another bowl. These three bowls will be your battering set-up for the cucumbers.

Dip the sliced cucumbers first in the flour mixture, then into the egg mixture and finally into the panko, making sure each is coated evenly. Place the breaded pickles onto a tray with a wire rack until they are all coated.

Heat your fryer to 375 degrees. Place the coated cucumbers one by one into the 375-degree fryer in a single layer. Fry for about 1 to 2 minutes until they are golden brown. Remove from the fryer and lay out onto a paper towel-lined tray. Cook the rest in batches until you’re done. Serve immediately with your favorite ranch sauce.