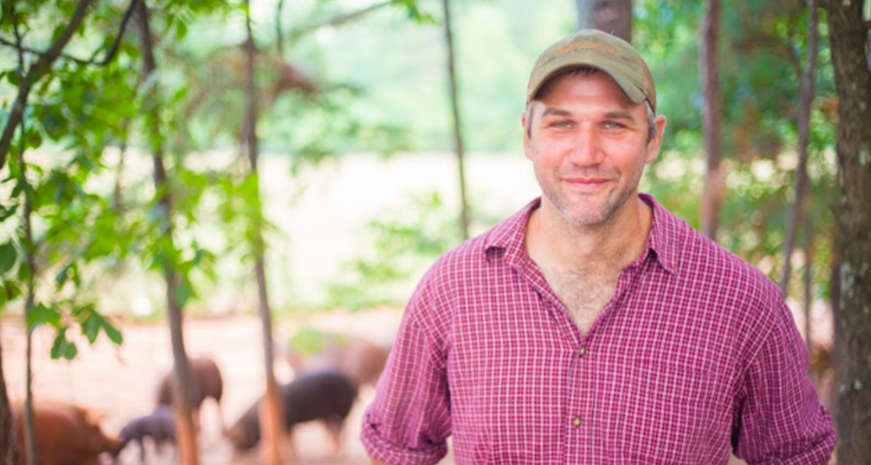 Unfettered farming: Frolona’s Josh Davis raises pork and beef on his own terms

On a bright autumn morning, Josh Davis drives his white Ford Ranger onto a commanding grass slope at the center of the 600-acre farm that’s belonged to his family since 1828. From deep in his chest, the 36-year-old lets out a bellow that grabs the attention of his nonchalantly grazing cows: “Heeeeeeey cowwwww.” Before he can even finish the call, a remarkable thing happens.

The red and Black Angus and white Piedmontese answer him. They moo, then follow his pickup into a paddock behind the family farmhouse. The pregnant mamas come running first, eager to lick up the high-magnesium salts Davis dumps into a trough. It’s the only supplement he gives his cows. They in turn give back the flavorful grass-fed beef that is one of the calling cards of Frolona Farm in Franklin, Georgia, about 65 miles southwest of Atlanta.

When people tell Davis his richly marbled steaks and pork chops taste uncommonly delicious, he replies modestly: “It’s not because I am some genius. I’m just letting [the meat] do what it’s supposed to do and not impede that.”

Davis grew up in the white frame house with the tin roof that his great-grandpa built in 1890. But as a young man, Davis’ interest in the place didn’t amount to a hill of beans.

“I wanted to get out as fast as possible and as far away as possible,” he recalls, sitting on the front porch. He planned to become a college professor, but in the course of earning his master’s in philosophy at the University of Louisville, he grew disenchanted with academia. He moved home and pursued his passion for hand-crafting banjos and guitars. (He and his wife, Christina, perform as Sourwood Honey.) He decided to raise vegetables in his spare time, selling produce and stringed instruments side by side at farmers markets.

But making a living off strawberries and tomatoes was tough for Davis, who has two young daughters. So in 2012, he purchased a pair of Large Black sows and one American Mulefoot boar, heritage pigs that are natural foragers. “I wanted breeds that would find as much free food as possible,” he says. He has since added Tamworth, Red Wattle and Berkshire breeds.

A year later he decided to focus on animals, including the cattle his father and uncle already raised. And he resolved to do it his way. Rather than having his beef and pork certified by an outside body, as he did with his Certified Naturally Grown vegetables, he follows his own code of ethics. 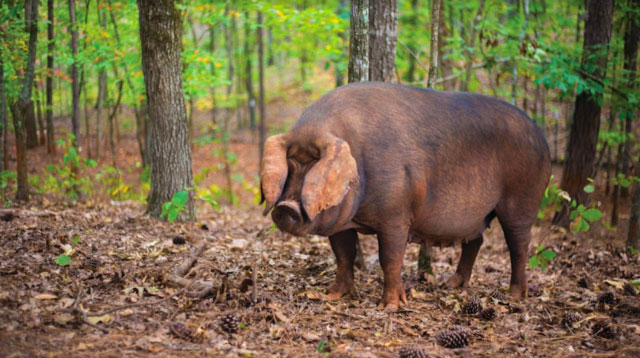 The swine are kept in 3- to 5-acre expanses of wood and pasture, where they munch on sunflowers, peanuts and rye that Davis cultivates and other goodies that they find themselves.

Above all, he is transparent about his practices. “I not only invite but encourage people to come out and see what I am doing,” he says. “I love showing them around.”

If you’re lucky, Davis might do his famous cattle call.

This article was published in partnership with Peach Dish, an Atlanta-based meal delivery service dedicated to enriching and nourishing people's lives through good food experiences.