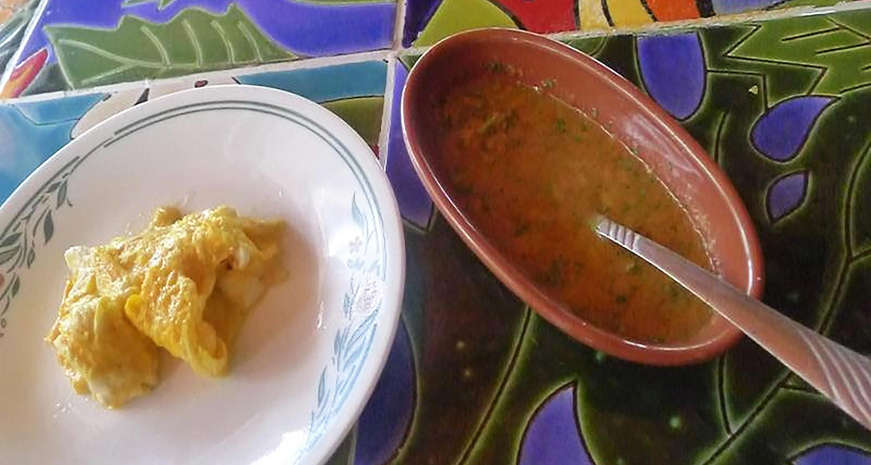 Two new hot sauce recipes to serve with your wings, tacos and more

Take a break from your usual fare this week and come on a trip with us to a different South — South America — with this deep-dive into two of the continent's favorite hot sauces.

In a plaza near the center of town in Santa Marta, Colombia, I bought some empanadas from a small stand. The couple selling them were neatly dressed and well-groomed, looking more like college kids than refugees from Venezuela, Colombia's troubled neighbor to the east.

The refugees blended in seamlessly with the strolling romancers, lounging elders and spandex-clad exercisers, and I assumed they were locals until I saw the green sauce they served alongside their empanadas. That sauce, called guasacaca, is a part of the Venezuelan identity that they could not leave behind. And the Colombians surely feel the same thing about their red counterpart, aji picante.

Where there are chile peppers, there are sauces made from chile. And where there is chile sauce there is a choice between green and red. Red chiles are fully ripened and pack a distinct sweetness along with their heat. Green chiles are picked before they ripen and have a slightly bitter, pungent and more complex flavor.

In New Mexico, where chile lords over the local cuisine, no restaurant order is complete without a response to the official state question: "red or green?" In the northern part of South America, the red vs. green divide follows the boundary between Colombia and Venezuela.

Where these sauces are consumed, there are as many versions of aji picante and guasacaca as there are kitchens. In both countries, their respective sauces are applied to savory substrates like beans, meat, plantains, empanadas and even salad. Aji picante contains red chile, and sometimes tomatoes, with cilantro and onion tops being the only green components. In the case of the relatively mild guasacaca, which is sometimes called Venezuelan guacamole, the green color comes from bell peppers, avocado, cilantro and parsley.

The Venezuelan refugees in the Santa Marta plaza, two of about 3 million who'd been welcomed by the Colombian government, served their empanadas with a guasacaca thin enough to be squirted from a squeeze bottle. Instead of avocado, their version was thickened with powdered milk and a shot of mayo — a guasacaca recipe for a tight budget, lean as these entrepreneurial Venezuelans but strong enough to get the job done. It added a dose of earthy green plant flavor and creaminess to nicely balance the meat-filled pastry.

After discovering guasacaca, I kept my blender busy as I experimented with various formulations of this glorious green condiment. I put it on boiled yucca, pollo asado, fried fish, even leftover ceviche. But I was, after all, in Colombia, and I eventually embraced the fiery red chile sauce of my adopted place.

Here, each restaurant visit brings a new version of aji picante to be studied, followed by my attempt to re-create it in my kitchen. Unlike guasacaca, aji picante doubles as a marinade, adding spectacular flavor to the local Colombian beef while softening its chewy texture. The large eggs from the red chickens behind my casita, scrambled with soft chunks of local cheese, seem to have been created just for aji picante. To have a batch of aji picante on hand is all the reason one needs to cook anything. This morning I turned the tables, and put my scrambled eggs into a bowl of aji picante and used them to mop it up.

Although I'm currently smitten by aji picante, the color (and texture, and flavor) of one's chile sauce is a personal thing, so I'll pass along recipes for both national sauces, assembled from what I've learned on my travels. One could do worse than to set a bowl of each upon the same table. In fact, given the current situation along the border between these red and green nations, and the generosity of the Colombians, there are surely many tables in Colombia set with both sauces.

The proportions are highly subjective, and dependent on your personal taste, but here is a framework to get you started.

Instructions
In a blender, combine the water, vinegar, white parts of the scallions, habanero, oil, lime juice and salt. Blend until smooth. Add the cilantro, red bell pepper, tomatoes (if using) and scallion greens. Pulse a few times to blend these final ingredients as finely as you like. Serve immediately or let sit overnight to develop the flavor. Season with vinegar.

Instructions
In a food processor, combine the avocado, pepper, onion, cilantro, parsley and garlic. Process until smooth. With the processor running, drizzle in the oil, followed by the vinegar and the salt and pepper. Taste, and adjust seasonings as you wish. Serve in a bowl alongside whatever else is on the menu.