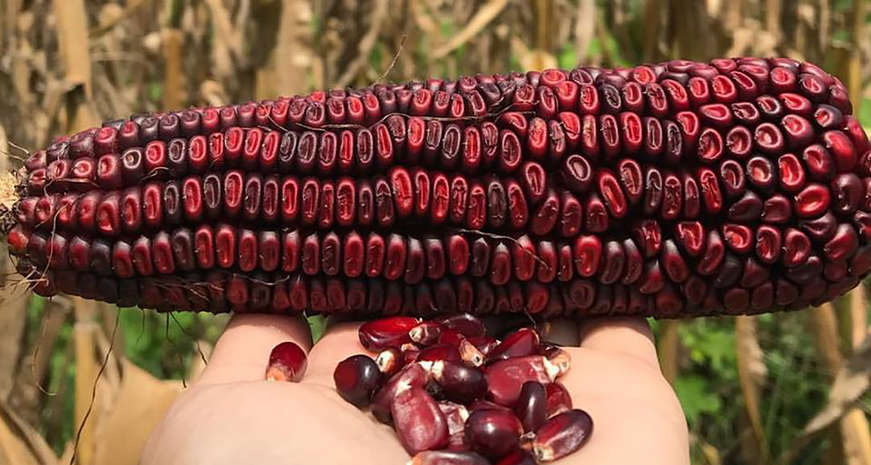 If you haven’t heard of Jimmy Red corn, you’re probably not alone.

Towards the end of its former life, Jimmy Red was popular among farmers and bootleggers who made hooch and moonshine whiskey. Today, over a decade later, Jimmy Red corn is a coveted heirloom plant that is grown by farmers, chefs and distilleries throughout the South.

Owner of Anson Mills, Glenn Roberts, attributes the renaissance of this heirloom plant to the Southern community. "This is really a community story," Roberts said. "This entire community of Southerners saved this corn."

If it wasn’t for the quick thinking of South Carolina farmer and seed saver Ted Chewning, the heritage corn wouldn’t exist today. In the early 2000s, Chewning saved two ears of Jimmy Red from the last bootlegger who was known for growing it, then distributed the seeds to local organic farmers and chefs to see what would happen, and if the corn could make a resurgence.

The journey back to resurgence was not easy.  According to National Public Radio’s The Salt, the heritage corn is an open pollinator, which means the plant is “easily fertilized by pollens blown its way from other corns.” To avoid cross breading, the corn requires hand pollinating, a tedious process that involves placing wax-coated bags over the plant's male and female flowers). After accumulating in the bags, the pollen is later collected and dusted by hand onto the silks, Roberts explained.

When transformed into grits, Jimmy Red corn is the chameleon of grits. "If you want your grits pink," Roberts said. "Cook it with an acid like Ogeechee lime juice. If you want purple or even black grits, put some baking soda in to render it alkaline." As tedious as it is to grow, the resulting corn is unlike anything chefs have cooked with before. "This is what grits must have tasted like a hundred years ago," said Forrest Parker, chef de cuisine at The Drawing Room restaurant in Charleston's historic French Quarter district.

When it comes to whiskey, Jimmy Red behaves unlike other corn. The Salt described it as a whiskey that is rich with honey-nut undertones. And distillers see the difference too. "It behaves like no other corn I've distilled," says Scott Blackwell, co-founder of Charleston's High Wire Distilling. "The pearls of oil on the distillate taste of marzipan and light cherry — not corn." 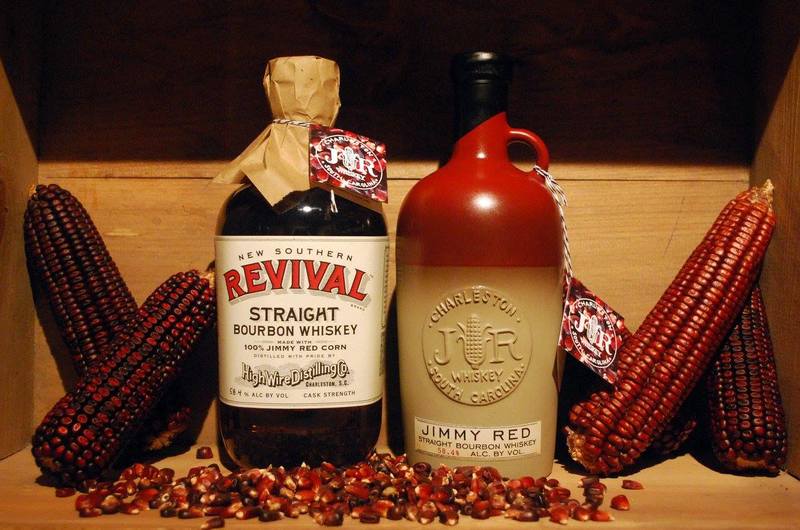 Blackwell experimented and distilled the same whiskey, grown on two different farms, using Jimmy Red. The different soils changed the flavor notes, giving the whiskeys completely different flavor profiles: One had sweet floral notes, and the other “tasted like earthy green banana and butterscotch.” Last year, Blackwell sold out of 570 bottles of the two-year-aged bourbon — in 11 minutes. According to High Wire they are expecting to release 1,900 bottles made from 14 acres of Jimmy Red corn grown in 2015.

Jimmy Red appears on the menu at some of the South’s best restaurants. At Sean Brock’s Charleston restaurants Husk and McGrady’s, it appears in grits, cornbread and flapjacks. And at Coltivare in Houston, it is used in Chef Ryan Pera's grits.

If you want to try making Jimmy Red grits at home but can’t make it to one of these restaurants, Geechie Boy Mill in Edisto Island, South Carolina, sells them online. We recommend trying them in Southern Kitchen's Shrimp and Grits with Andouille gravy recipe below. Keep an eye on the grits; you might have to adjust their cooking time.

When the grits are almost finished, make the shrimp and andouille gravy: Heat a cast iron skillet over medium heat. Add the oil, and when it is hot, add the andouille. Cook the sausage, stirring occasionally, until browned. Add the shallots and garlic, and cook for 1 minute. Add the flour, thyme and bay leaf and cook, stirring constantly, for 3 minutes.

Add the chicken broth and bring to a simmer, then add the shrimp. Cook the shrimp, flipping once, until they just turn opaque, about 3 minutes. Remove from the heat and stir in the butter, parsley and lemon juice. Season to taste with salt and pepper.

To assemble, spoon some of the grits into serving bowls or plates. Top with the shrimp mixture, then garnish with sliced scallions. Serve.