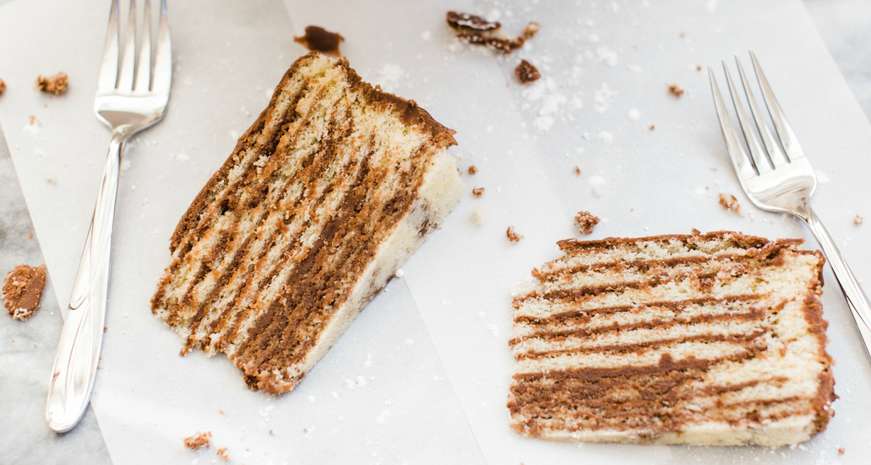 This show-stopping, fudgy layer cake is a dessert you'll want to spend the afternoon with

It isn't a Southern celebration without some kind of cake. Depending on where you're from, a celebratory cake could mean coconut layer, or hummingbird or Lane cake — all cakes are good cakes, as long as they've got plenty of frosting and the right number of layers. If you're from southern Georgia, like our Visual Content Producer Ramona King, that number of layers can reach sky high.

Below the so-called "Gnat Line," which stretches across the state from Columbus to Savannah, and in much of southeastern Alabama, the celebration cake of choice is a towering cake, most often called a "little layer cake," made of countless thin cake layers separated by a smear of boiled fudgy frosting. King's grandmother, Ramona Mercer, used to make the cake for countless occasions, including every year for her mother's birthday.

"I hardly ever remember a time when I would walk into my grandmother's dining room [in Metter, Georgia] and this cake wouldn't be sitting on her antique buffet in a glass cake stand," King said. "This cake was her go-to show-stopping cake and the most requested of her desserts. ... As the wife of a former Senator and the acting County Commissioner, she made this cake for almost everyone in Candler County at some point during her retirement from teaching." 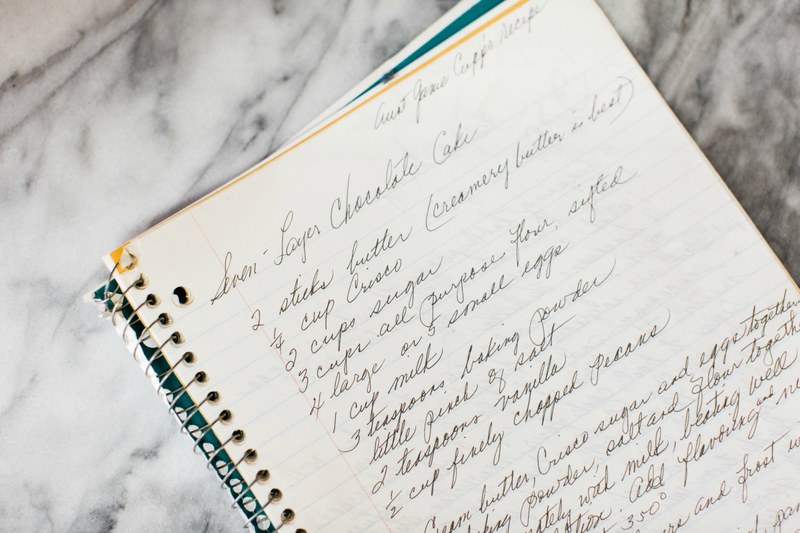 The little layer cake is likely descended from the Hungarian Dobos torte, a cake made of thin sponge layers, chocolate buttercream and caramel. Named for its inventor, József C. Dobos, it first made an appearance in 1885 at the National General Exhibition of Budapest. Other comparable cakes cropped up across Europe and European colonies around the same time, and inspired bakers in the United States to do the same. One such cake, still popular today in New Orleans, is the Doberge cake, which substituted pudding for the buttercream filling and fondant for the caramel topping. In Maryland, the Smith Island Cake is another famed variation made with yellow cake layers, cooked chocolate icing and, often crushed candy bars. In Appalachia, bakers fashion stack cakes that soar to similar heights with apple butter sandwiched between crepe-like layers.

Little layer cakes have an air of austerity, like the stack cake, with a bit of sweet flair from the chocolate frosting. Mercer's recipe calls for a classic yellow butter cake batter, studded with pecans, and stretched with a bit of Crisco. The thick, fudgy frosting gets its color from a touch of cocoa — just enough so that you know its there. "It is moist, but not in a fluffy way," said King. It's moist "in a decadent, true Southern (and deliciously) grainy fudgy way."

Over the holidays, King tried her hand at making her grandmother's cake, following the recipe hand-written in a notebook decades ago. "The cake was just my mom and I remembered it," she said. "It was one of those visceral, close-your-eyes-and-taste-the-nostalgia moments."

However, the process was not without its challenges. "I gained tremendous respect for my grandmother during the process of making this cake," said King. "It really is a labor of love." King found it challenging to remove the thin cake layers from the pan, as well as to keep the frosting warm enough to spread throughout the process. "This cake was actually much more work than I was expecting," she said. "She is even more of a kitchen magician in my mind now." 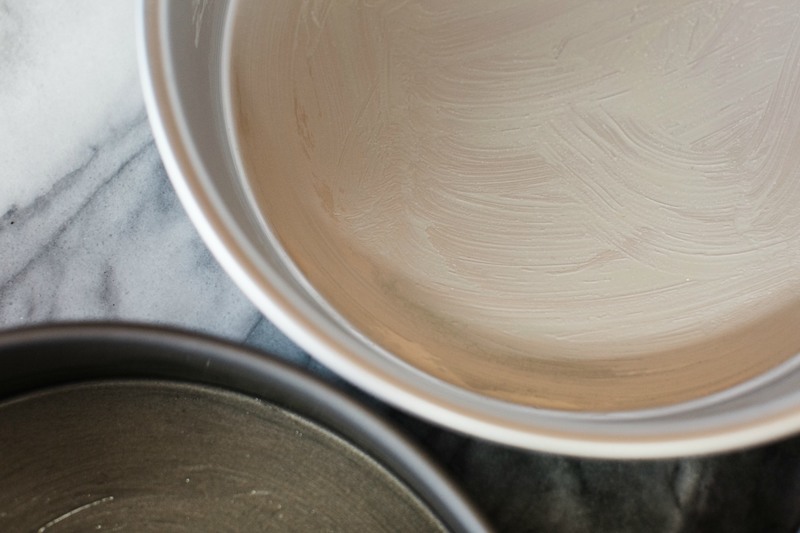 Despite the challenges, King plans to tackle the cake again. She'd like to try it with older pans — she said her brand-new ones clung too tightly to the cake, causing her to lose a few layers — and will double the fudge frosting recipe next time. King said it also helps to plan ahead. She told me she realized why her grandmother always had the cake ready to go, on its cake stand, when she'd show up to her house: "It is a mess! A happy mess. We never had any idea how much work had gone into her perfect masterpiece. You definitely want to let this rest for at least a few hours before serving. This allows the fudge to cool and settle and the preparer to wash dishes and take a nap!"

Like many baking projects, practice certainly makes for a more perfect cake. However, even with little mistakes here and there, King said, the flavor and texture was spot-on: "I'm hoping with time and practice I can achieve what she did so many times! She was so well known for this cake in her town. As her namesake, I'm proud to carry on the tradition." 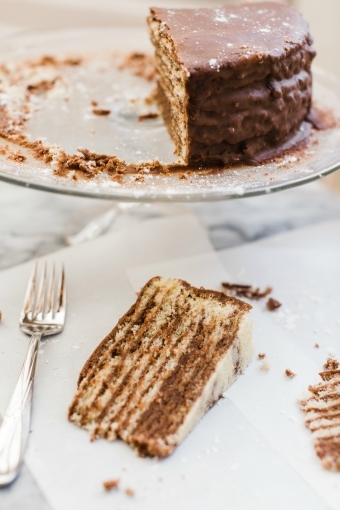 Chocolate Fudge Little Layer Cake
Note: If you're worried about having enough frosting to spread between layers, you can double the fudge portion of the recipe. If you can't find White Lily Flour, you can use Swan's Down cake flour or another cake flour. To streamline the process, you can boil the frosting while you bake the cakes, and assemble as each cake comes out of the pan; be aware that this will likely create more of a mess.

Instructions
To make the cake: Heat the oven to 350 degrees. Spray two or three 9-inch cake pans with vegetable oil spray or grease with butter.

In a medium bowl, sift together the flour, baking powder and salt.

In the bowl of a stand mixer fitted with the paddle attachment, cream together the sugar, butter and shortening on medium-high speed until light and fluffy, 3 to 5 minutes. Beat in the eggs, one at a time, until creamy.

Add a heaping 1/4 cup of the batter into each of the prepared pans. You should have just enough batter to just barely cover the entire bottom of the pan. It looks very thin but will rise when baked.

Bake until the cakes have just risen a tad and are firm to the touch, about 10 minutes. Don’t let the cakes brown. Let the cakes cool in the pans for 5 minutes, and then transfer to a wire rack to cool completely. Repeat with the remaining batter. You should have at least 10 baked layers.

To make the frosting: Sift the sugar and cocoa into a medium saucepan. Add the evaporated milk and butter. Place over medium heat and cook, stirring occasionally, until the sugar and butter melt and the mixture begins to boil. Continue to boil, stirring, for 4 minutes. Remove from the heat and stir in the vanilla. Continue to stir until the vanilla is fully incorporated. If necessary, keep warm over very low heat while you assemble the cake.

To assemble the cake, place one layer on a cake plate. Spread about 1/4 cup of the warm frosting over the top of the cake. It will soak into the cake; this is okay. Place a second cake layer on top, followed by more frosting. Repeat with the remaining cake layers. By the time you stack the top layer, the frosting should be cool enough to spread across the top of the cake and not sink in. Top with additional pecans, if desired.

Let the cake sit for at least 2 hours to let the fudge set before serving.