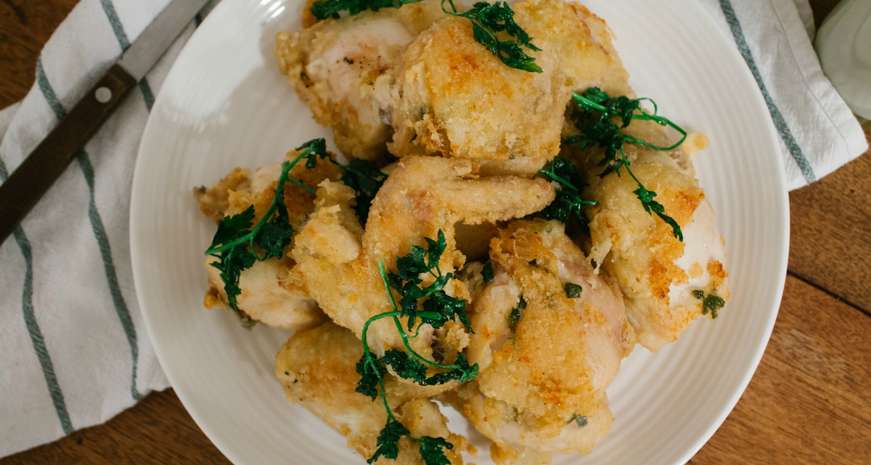 I've made fried chicken, start to finish, twice. The first time, I burned the outside in an attempt to get the chicken cooked all the way through. The second time was earlier this week. It was much better, even though the recipe was like nothing I had ever seen before.

The first recorded recipe for fried chicken, called Pullum Frontonianum, was in the 1st century Roman cookbook "Apicus," but the fried chicken we think of here in the South can be traced to a melding of techniques from both Scotland and West Africa. Recorded recipes for the American dish exist as early as 1830s, and began to appear frequently in books published during and after the Civil War. Of course, this dish was prepared almost exclusively by enslaved people, and has, since the abolition of slavery, been closely associated with African-American cooking.

At its most basic, fried chicken is simply seasoned chicken pieces, breaded in flour and fried in some kind of fat. Today, we make fried chicken brined in buttermilk and hot sauce, breaded in all kinds of flours and fried in peanut oil or canola oil or even lard. Cooks today may throw in all kinds of things into the marinade, from lemonade to ginger and add piquant spices or panko bread crumbs to the breading. But for this week's column, I turned to a unique recipe from one of the first African-American cookbook authors, Rufus Estes. 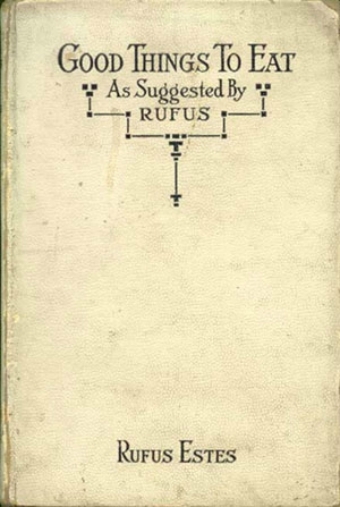 Estes was born into slavery in in Murray County, Tennessee in 1857. When the war broke out, "all of the male slaves in the neighborhood for miles ran off and joined the 'Yankees,'" he wrote in the introduction of his 1911 cookbook "Good Things to Eat." "This left us little folks to bear the burden." After the war, in 1867, his mother moved the family to Nashville, where he attended one term of school and worked various jobs milking cows and carrying "hot dinners for laborers in the fields."

When he was 16, Estes started working in restaurants, first at an establishment in Nashville owned by a man named Hemphill, and later at a Chicago restaurant, before joining the Pullman Rail Car Company. There, he said, he cooked for two presidents and a princess, in addition to other "prominent people," as he was in charge of all special parties. Estes later worked as a chef on a boat sailing from Vancouver to Tokyo, as well as a private train car on the Kansas City, Pittsburg & Gold Railroad and the United States Steel Corporation in Chicago. He self-published "Good Things to Eat" while in Chicago, but then faded into obscurity until the book was re-printed in 1999.

"Good Things to Eat" offers a mix of elaborate, high-end fare served in his rail cars, as well as practical Southern recipes, such as sauteed unripened melon and green tomato soup. His fried chicken recipe has a few tricks clearly gleaned from years of kitchen experience, but is, at its heart, a simple recipe.

Instead of a buttermilk brine, Estes cooks a few vegetables in brown butter to build the base of a marinade containing both salt and vinegar, which adds flavor and tenderizes the chicken at the same time. The chicken sits in this mixture for only a few hours before being breaded in flour and fried to a "good brown."

“FRIED CHICKEN—Cut up two chickens. Put a quarter of a pound of butter, mixed with a spoonful of flour, into a saucepan with pepper, salt, little vinegar, parsley, green onions, carrots and turnips, into a saucepan and heat. Steep the chicken in this marinade three hours, having dried the pieces and floured them. Fry a good brown. Garnish with fried parsley.”

When writing my version of the recipe, I relied on Michael Twitty's interpretation on his blog, Afroculinaria; he suggests making the marinade into a brine with additional liquid. I also utilized our own Chef Jeffrey Gardner's technique for the actual frying step. And yes, I did drop parsley sprigs into the hot oil for garnish.

The final result was deeply flavorful and juicy chicken with a thin, golden crust. The browned butter and vinegar gave the chicken the same kind of richness and tang you'd get from a fulI-fat buttermilk brine. The fried parsley was an excellent garnish, and made me wonder why we don't fry parsley more often. Even better — this chicken was just as good eaten at room temperature the next day. 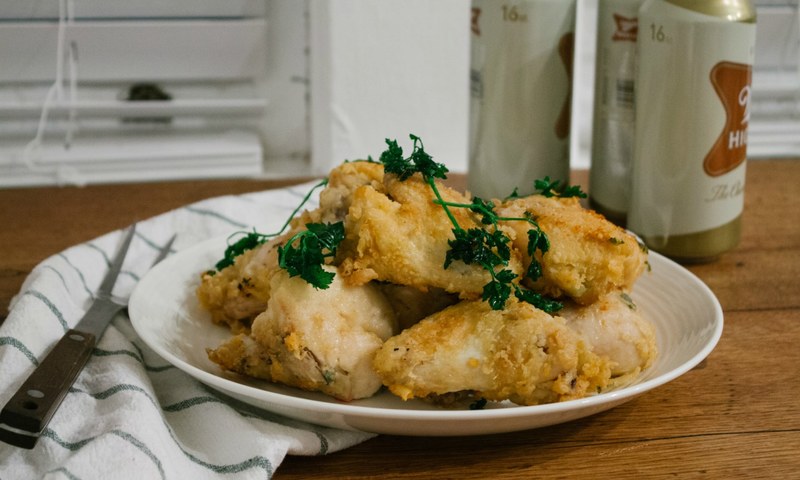 Instructions
To make the brine: In a large pot, melt the butter over medium heat. When the butter is foamy, add the carrots, turnip, scallions and parsley. Cook, stirring occasionally, until softened, about 10 minutes. Add the flour and continue to cook until just beginning to brown, 1 to 2 minutes. Stir in the water, salt, vinegar and peppercorns and remove from the heat. Continue to stir until the salt has dissolved. Add the ice cubes and stir until the ice is melted and the brine has cooled to room temperature.

To make the chicken: Add the chicken pieces to the brine. If necessary, weigh down the chicken with a plate to ensure it is submerged. Refrigerate for 3 hours.

Remove the chicken from the brine and pat dry.

Pour a couple of cups of flour into a shallow bowl and season lightly with salt. Dredge the chicken pieces in the flour until well-coated and place on a wire rack set on a baking sheet. Let rest for at least 15 minutes.

As the chicken is resting, fill a large cast iron skillet one third of the way up the sides with vegetable oil. Place the pot over medium to medium-high heat and bring the oil to 325 degrees. Monitor the oil's temperature using a fryer or candy thermometer. Line a second baking sheet with a triple layer of paper towels.

When the oil is hot, add the legs and thighs of the chicken first, placing them around the sides of the skillet. Cook for 2 to 3 minutes before adding the breasts and the wings. Cover the skillet with a wire splatter screen to prevent excess grease from adhering to your kitchen surfaces. Fry, flipping occasionally, until the internal temperature of the chicken reaches 165 degrees, 10 to 15 minutes.