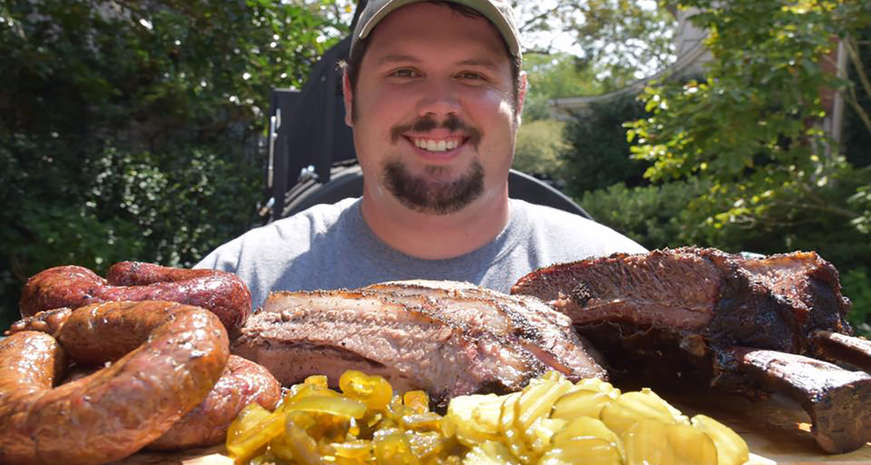 The 2018 Forbes 30 under 30 list came out yesterday highlighting some of the world’s brightest minds in various industries. The Food & Drink portion of the list highlighted those in the food industry who are pushing “palates and diets in new directions.” From Southern chefs to restauranteurs, the South was strongly represented and even featured the first Texan pitmaster to make the list.

Just a few years ago, Grant Pinkerton made a life-changing decision to get off of his parent’s couch, sell his saxophone and use the money to buy a trailer. The trailer was turned into a barbecue pit which put him on the map in the barbecue world.

In 2016, Pinkerton opened Pinkerton’s Barbecue in Houston. “Within its first nine months, revenue hit $2 million,” notes Forbes. Pinkerton is still very hands on in the restaurant and he “still trims every brisket himself.”

Texas Monthly notes that Pinkerton also made an impression on judges for his service to the first responders and those affected by Hurricane Harvey. This along with the growing success of his business made it obvious for Forbes to add him to the 2018 list.

Chef and personality Ayesha Curry, who also made the list, will join Pinkerton and the Houston food scene when she debuts the second location of her global barbecue joint, International Smoke, in 2018.

In Miami, the cofounder of The Salty Donut, Amanda Pizarro, also caught the attention of Forbes. The 25-year-old opened the artisanal donut shop last year and has been exciting the taste buds of Miami by serving up decadent donuts with flavors that include caramelized fig, pumpkin and Nutella. The menu is constantly changing as Pizarro's goal is to use the freshest ingredients possible.

Staying in South Florida, another Miami restaurant owner made the 2018 list. David Foulquier, who owns and runs Fooq’s in Downtown Miami, is in the business to sell good food. Fooq’s has an eclectic menu that was inspired by Foulquier’s parents: “his mother fled Tehran during the Iranian Revolution in 1979 while his dad hails from Paris.” However, his next adventure will bring him to New York where he is opening, Sushi Noz, “an 8-seat hinoki wood omakase counter on New York City’s Upper East Side.”

In Arlington, Virginia, Jeremy Martin and Chase Damiano are changing the way offices drink coffee round the D.C. area. At Commonwealth Joe Coffee Roasters, their Nitro Cold Brew Kegerator is finding its way into more and more offices. The best part is that the company “takes care of everything from roast to pour, even resupply the keg when the brew gets low.”  Commonwealth’s Joe next goal is to break into the New York market.

Carlie Steiner, cofounder of Himitsu in Washington D.C. also made the list. As Himitsu’s beverage director, she is known for crafting “a robust drinks program where cocktails have whimsical names like “Finding Nori” while sherry and “skin-contact wine” options abound.”