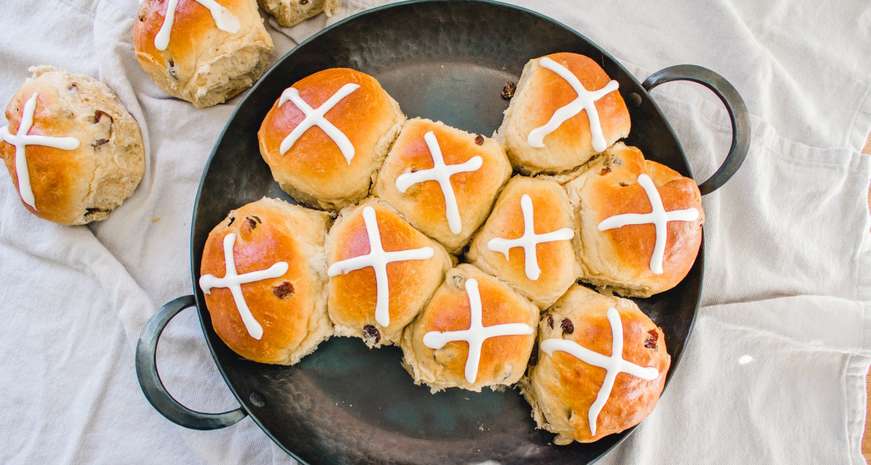 These Southern-style hot cross buns get a little boozy boost

It may still be the middle of March, it's already time to start planning for Easter. The holiday comes early this year — April 1 — so it's time now to gather your best brunch ideas and your guest lists and start dreaming of an afternoon meal on the patio. And in my house, meal planning includes Easter bread, which doesn't have to be as scary as it may sound.

Baked enriched breads studded with fruit are an Easter tradition throughout the Western world. Whether they are ornate braided loaves or miniature buns, these sweet breads are a signifier of the end of the Lenten season and a celebration of warm weather to come. This year, I'm baking trays of hot cross buns made Southern with a few generous pours of bourbon.

Hot cross buns have a curious and oft-debated history, full of political and religious intrigue, but, really, they are a derivative of similar breads baked in Greece and Eastern Europe, which were themselves likely descended from similar baked goods from Egypt and Central Asia. Adding sugar and dairy products to leavened bread makes them more than just an everyday necessity; these are celebratory breads. 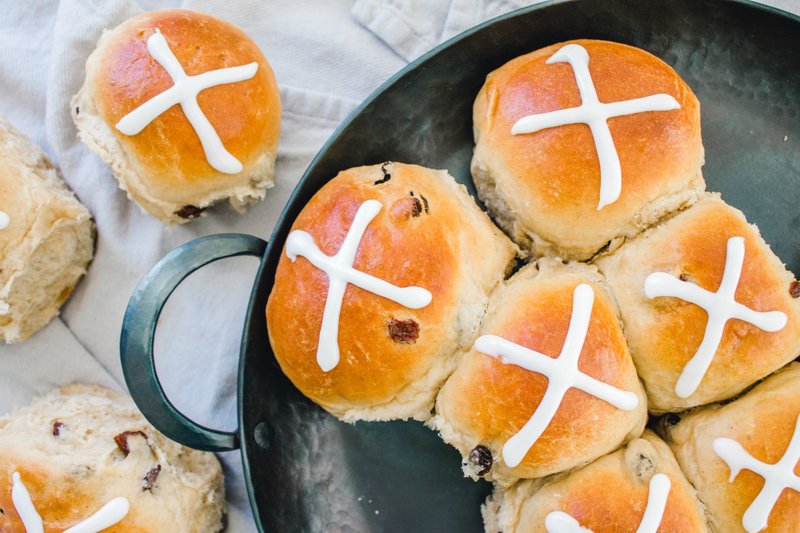 English hot cross buns are typically made with rum-soaked currants and are topped with a cross shape, made often from pastry that bakes into the bread itself. Here in the South, we're far more likely to find sweeter buns decorated with a cross of white icing that takes them into almost-dessert territory. This powdered sugar shortcut also makes the buns slightly quicker and easier to bake, and offers the opportunity to sneak in a little extra booze — hey, we're celebrating here!

For my Southern version, I've swapped that rum out for good Kentucky bourbon and added another splash into the icing. (Bourbon is better than vanilla, right?) I mix up the dough in my trusty stand mixer to make the whole thing as easy as possible.

I also added some South-made presentation by baking the buns in the roasting pan made by Virginia-based Blanc Creatives. This pan has about the same surface area as a standard 9- by 13-inch baking dish, which is more typical. (Go ahead and use a Pyrex if that's what you've got.) You can serve them straight out of this gorgeous pan, too — just let them cool on a wire rack and pop them back in the roaster come serving time. 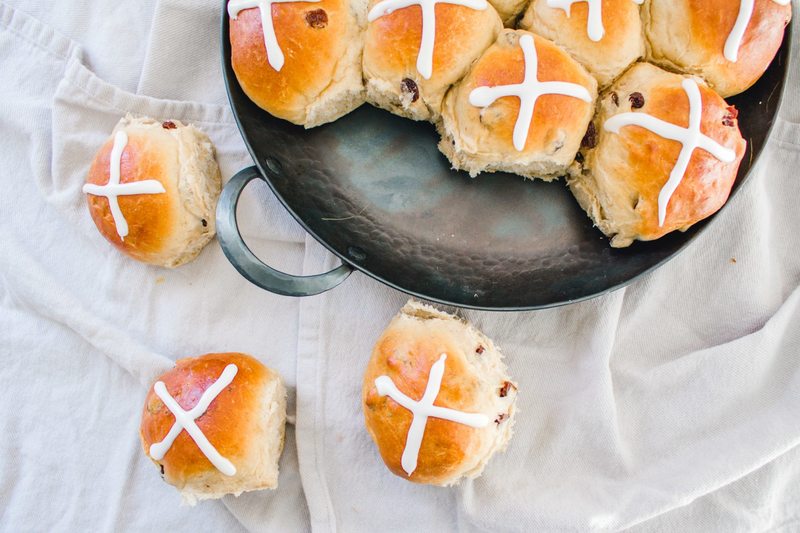 Instructions
To make the buns: Lightly butter a 9- by 13-inch baking dish or other similarly-sized pan, such as a round roaster. Grease a large bowl with nonstick oil spray.

In a small saucepan, combine the raisins and bourbon. Bring to a simmer over medium-low heat. Cover, remove from the heat, and let soak until the raisins have absorbed most of the bourbon, about 5 minutes. Uncover and let cool to room temperature.

Meanwhile, in a 2-cup liquid measuring cup, combine 1 1/4 cups of the milk and two of the eggs. Separate the third egg and add the yolk to the milk mixture. In a small bowl, whisk together the remaining egg white and remaining tablespoon milk.

In the bowl of a stand mixer fitted with the dough hook, combine the flour, brown sugar, baking powder, yeast, salt, cinnamon, cloves and nutmeg. Mix on low speed until combined. With the mixer running, pour the measuring cup of milk and eggs into the flour. Increase the speed to medium-low and continue to mix until the milk is incorporated. Add the butter, a few pieces at a time, and mix until fully incorporated. Increase the speed to medium and mix the dough until it is smooth and elastic, 8 to 10 minutes; it will still be sticky.

Reduce the mixer speed to medium-low and add the now-cooled raisins, plus any bourbon remaining in the saucepan. Continue to mix just until the raisins are incorporated. Using a spatula, transfer the dough mixture to the prepared large bowl, cover with plastic, and let sit at room temperature until the dough has risen by about half, about 1 hour.

Transfer the dough to a floured counter and roll into a fat log. Cut the log in half. Cut each half into six equal pieces, so that you have 12 equal-sized pieces of dough in total. Roll each piece into a smooth ball and arrange evenly in the prepared baking dish. Cover with plastic, and let sit at room temperature until they've puffed enough to touch each other, about 1 hour. The dough should slowly spring back when poked with a finger.

While the dough balls rise, heat the oven to 375 degrees.

When you're ready to bake, brush the tops of the rolls with the reserved milk-egg white mixture. Bake until golden brown, 20 to 25 minutes. Transfer the baked rolls to a wire rack and let cool.

While the rolls are cooling, make the icing: In a medium bowl, whisk together the powdered sugar, bourbon and salt. Whisk in the milk, adding more, as needed, to form a smooth, thick, pipeable glaze. Transfer the glaze to a piping bag fitted with a small tip or a large zipper lock bag. If using a zipper lock bag, smoosh the icing to one of the corners and snip off the corner to create a small hole.

Pipe the icing into cross shapes on top of each cooled bun. Serve.

What's so special about carbon steel?

What's so special about carbon steel?