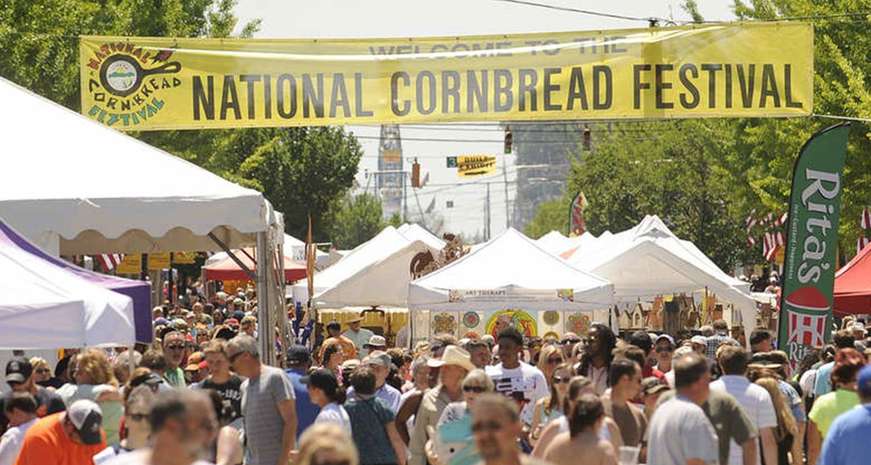 The sun is shining and spring is almost here. It's time to get outside and enjoy what the South does best: festivals, especially the food-related kind. We went out and found the best of what’s going on in the Southern food world in April, and arranged everything according to the dates to help you plan your road trip. 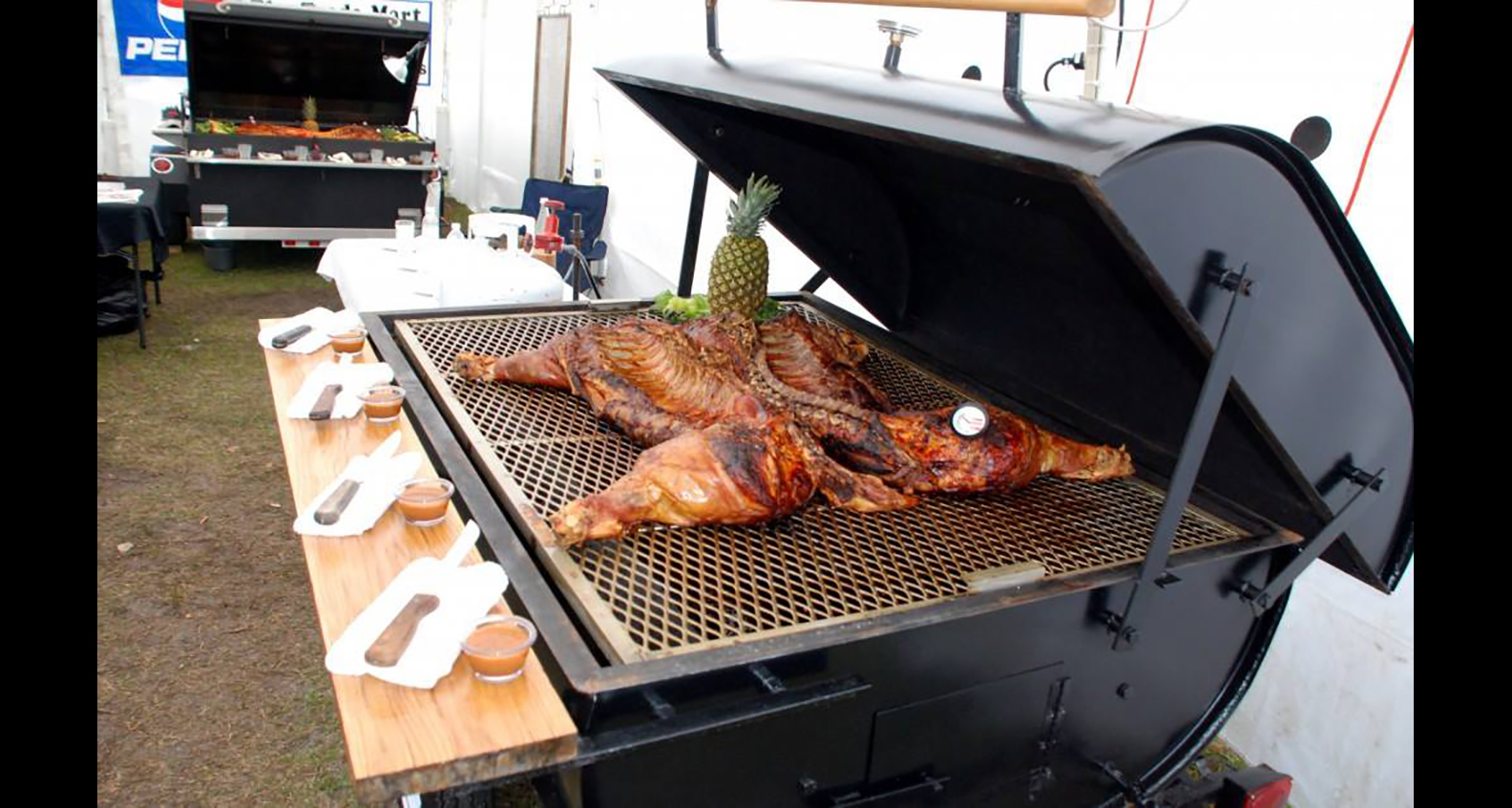 April 6-7: Newport, North Carolina
Barbecue is a Southern specialty, and pit masters in the Carolinas like to barbecue their hogs whole. Forty years ago, the Pig Cookin’ contest began as fundraiser in Newport, North Carolina. Today the event has grown into the largest all-volunteer, non-profit, pig-cookin’ throwdown in the country. So, you’ll be supporting a good cause while you’re snacking on 60 different varieties of barbecue.

Whole hog barbecuing means “a whole pig, split down the middle (without head and feet) and placed on the cooker,” noted Newportpigcooking.com. The cooks get barbecuing on Friday night and judging begins at 8 a.m., on Saturday morning. After a hog has been judged, the pit masters break down the pig so festival attendees can try the barbecue. 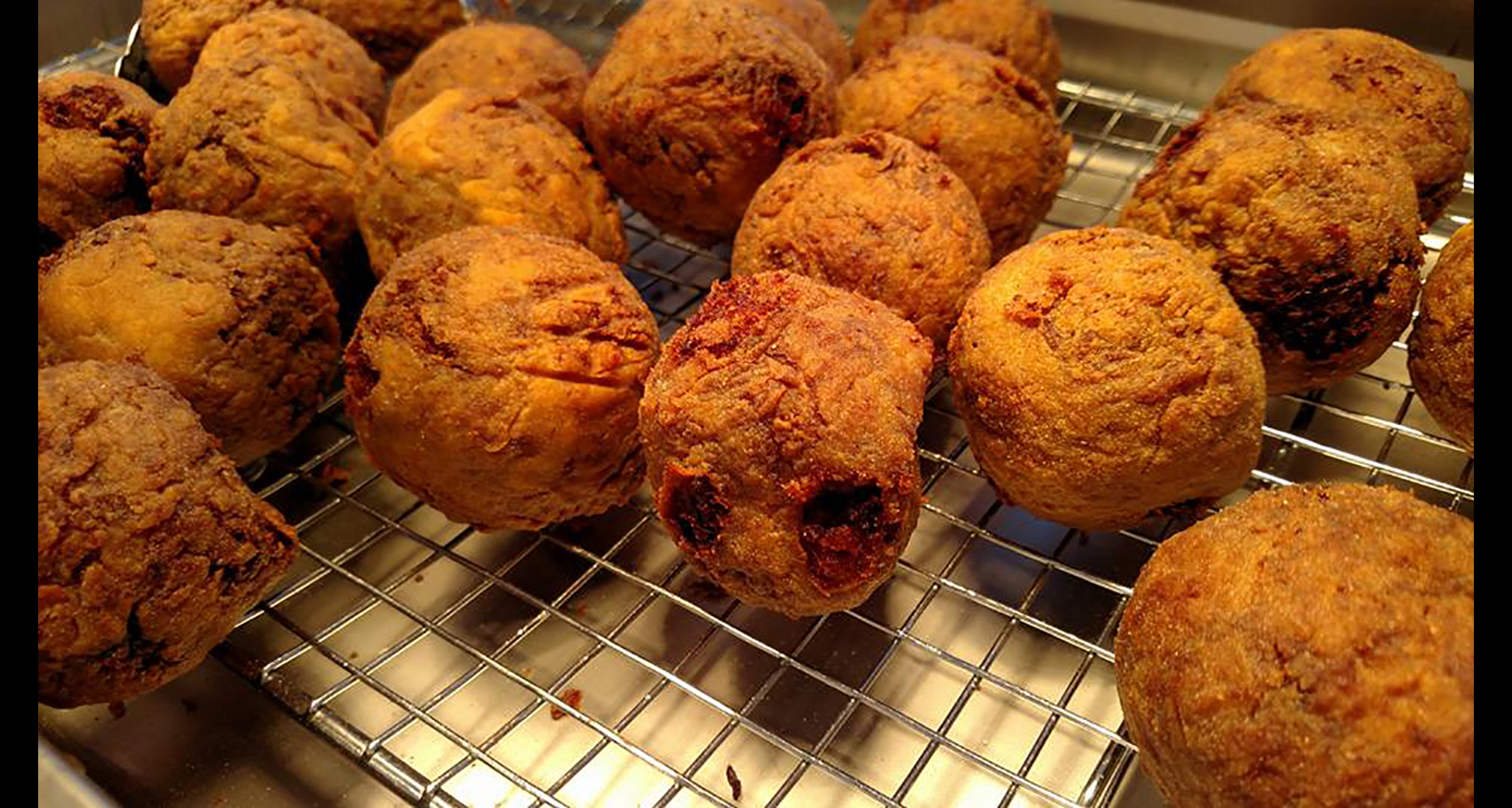 April 6-8:  Scott, Louisiana
Known as the “Boudin Capital of the World,” it’s only fair for the city of Scott to host a festival celebrating the Southern specialty. Not quite sure what boudin is? Here’s a quick reminder of what makes up this Cajun specialty: It’s a sausage made from a blend of meat, rice and/or pork. There are a few different varieties and in the South local variations can include alligator, shrimp or crawfish. Festival attendees will get to try all of these varieties during the event. Live music will be entertaining crowds throughout the weekend, but the real entertainment will take place at the boudin eating contest. Last year’s winner, Sivali Wahab, won for a third year in a row after eating 3.84 pounds of boudin in three minutes. 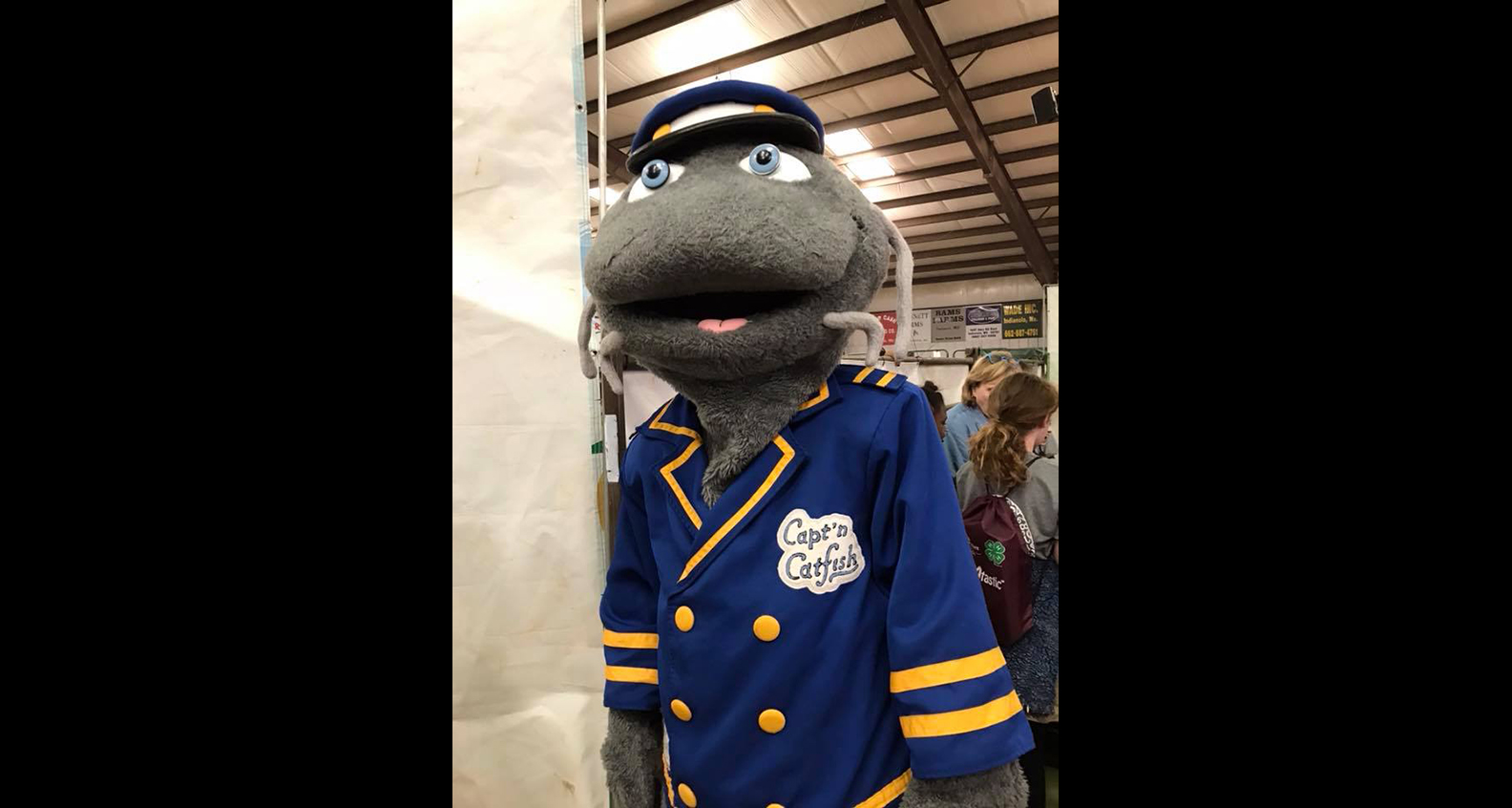 April 7: Belzoni, Mississippi
We love catfish in the South, so it’s appropriate that the World Catfish Festival take place in Mississippi. Each year, people from around the country head to the Mississippi Delta to celebrate catfish. The festival takes over downtown Belzoni for a day dedicated to catfish. Attendees will be able to snack on different catfish delicacies from food vendors, or compete to see how much catfish they can consume during an eating contest. Captain Catfish (pictured above) will be wandering around town happily taking pictures with festival attendees, and contestants will vie for the title of Little Miss Catfish and Miss Catfish. 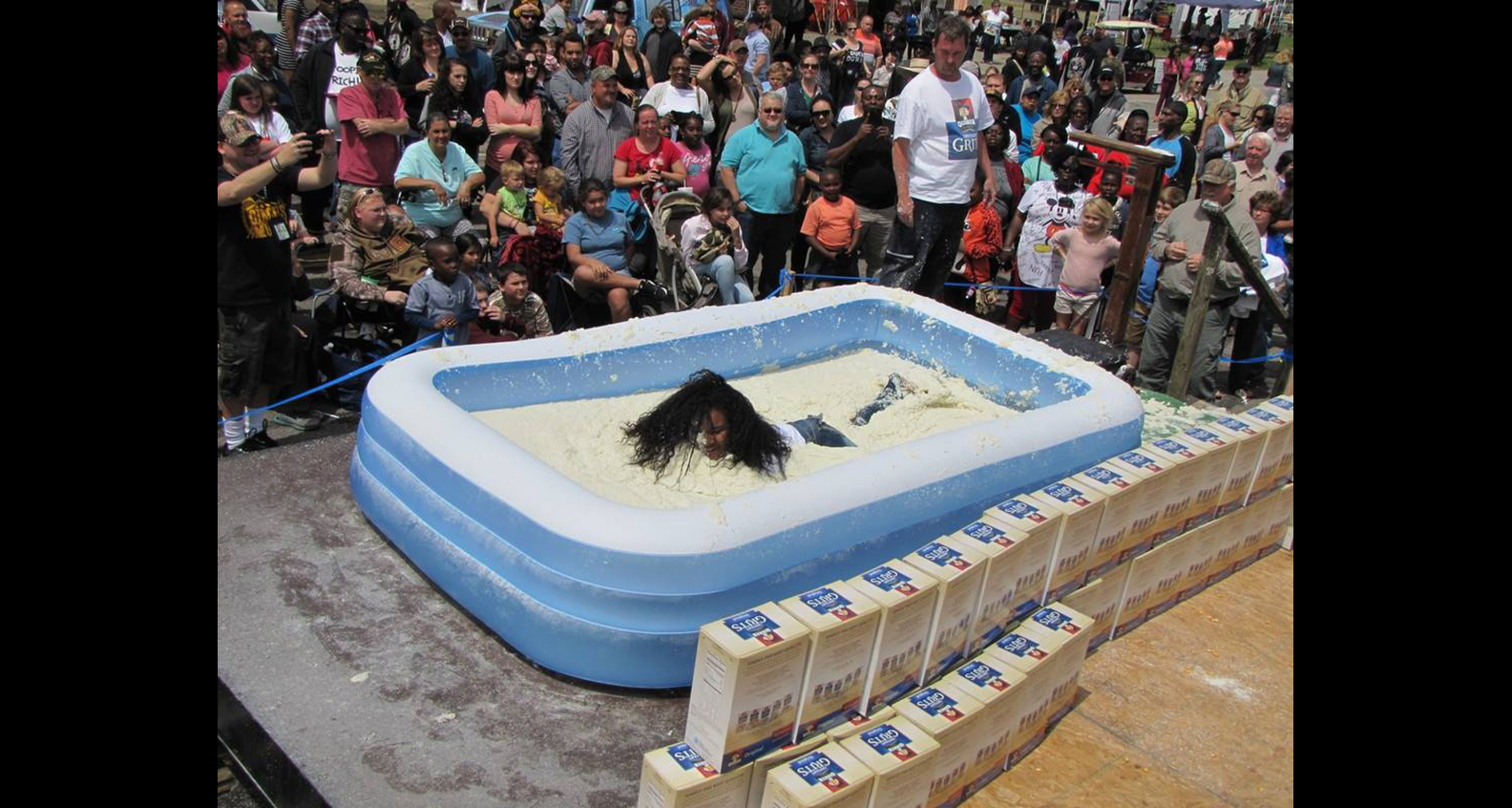 April 13- 15: St. George, South Carolina
The World Grits Festival is held in St. George because of the town’s love of grits. The festival was created back in 1986 after owners of two local Piggly Wiggly supermarket stores did some research and found that the people of St. George ate more grits per capita than any place in the world. Today, the festival draws a crowd of more than 45,000 people to this small South Carolina town for the three-day event.

The fun and games during the festival include tastings of meals focused on grits, carnival games, and arts and crafts, but the highlight of the festival is the Rolling in the Grits contest (pictured above). Contestants dive into an inflatable pool, which is filled with 27 cases worth of instant grits, and roll in the grits for 10 seconds. So, what’s the point of this contest? Grits-collection. “Competitors are weighed before and after their rolls: Whoever’s stashed the most grits in his or her shirt, pants and pockets wins,” The Post and Courier reported. 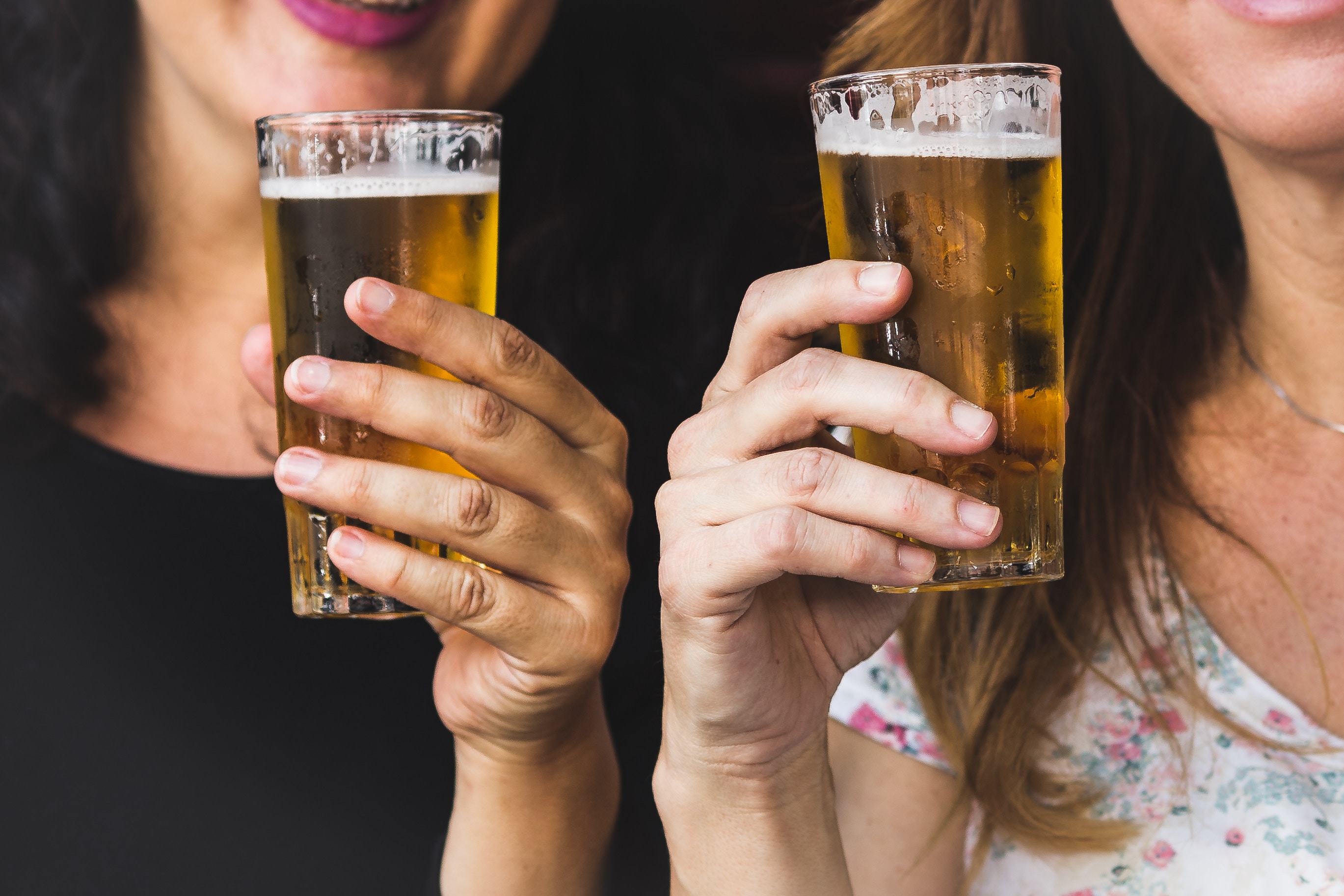 April 15: Athens, Georgia
For 20 years, beer lovers and brewers have flocked to Athens for one of the best beer festivals in the South showcasing the best Southern beer. The Classic City Brew fest is revamping the event this year to focus on cask ales and special local drafts from breweries like Terrapin, Torched Hop and Creature Comforts. The tastings will mainly take place in The Athens Cotton Press, but local breweries and bars will also offer tastings during the week leading up to the festival. 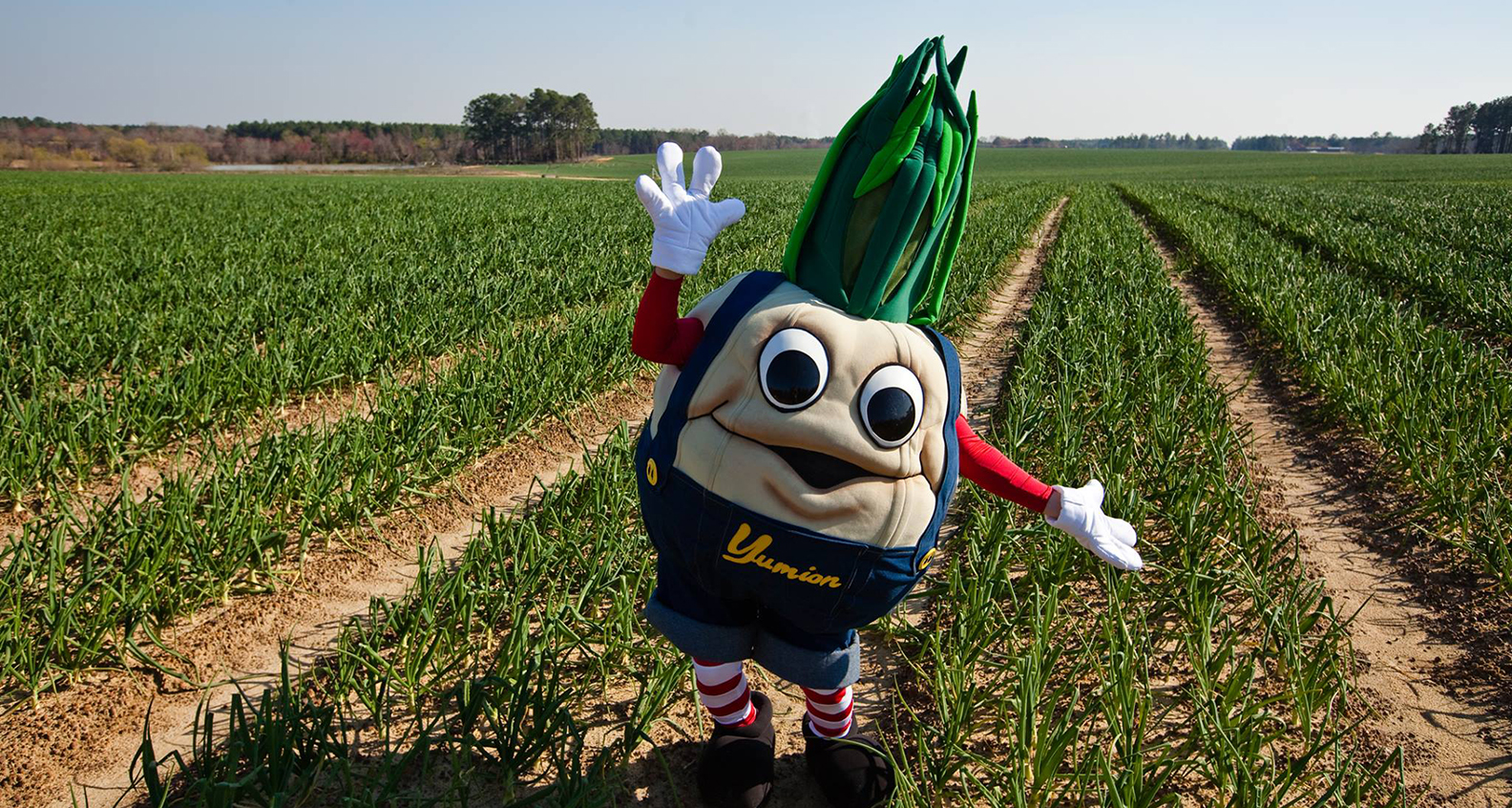 April 26-29: Vidalia, Georgia
Vidalia is known for one savory item — Vidalia onions, of course. As the official state vegetable, Vidalia onions hold a special place in the heart of Georgians, so much so that they’ve dedicated an entire festival to celebrate the onion. Along with parades and live entertainment, contestants will compete for the title of Miss Vidalia Onion and chefs will create dishes dedicated to the vegetable. Make sure to stop by the Vidalia onion-eating contest, and if you see Yumion! (the festival’s mascot) wandering around, grab a photo with him. 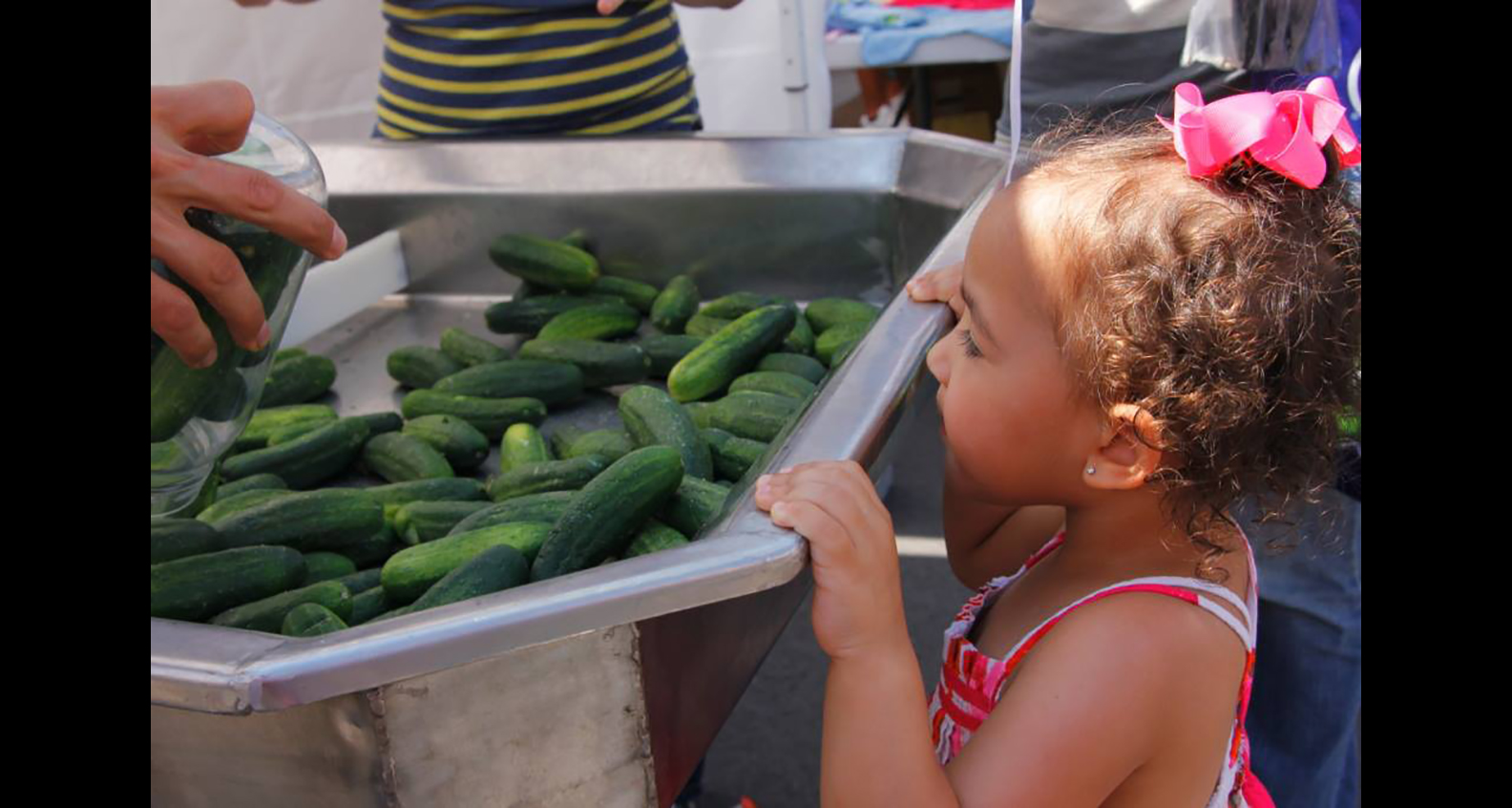 April 27-28: Mount Olive, North Carolina
For more than 30 years, this pickle festival has been kind of a big dill in North Carolina. Pickle pun aside, the North Carolina Pickle Festival puts pickles and pickle-flavored products in the spotlight for the weekend. 12 brave contestants will compete to see how many Mt. Olive whole kosher dill pickles they can eat in five minutes. The pickle festivities also include a pickle racing derby, a pickle packing challenge (how many pickles can you pack into a jar?), and food vendors offering wacky pickle flavored foods, like pickle snow cones and pickle lemonade. 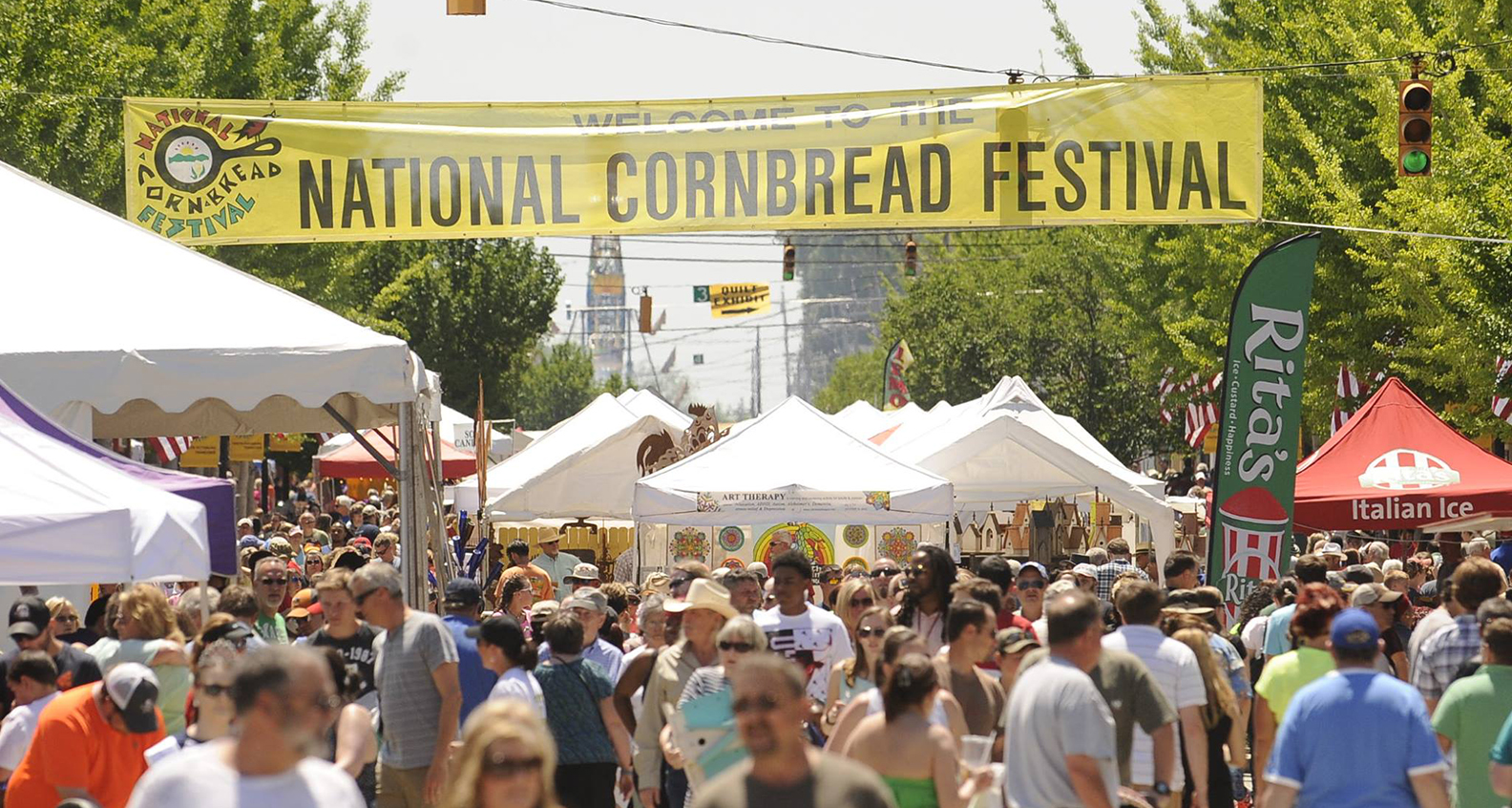 April 28-29: South Pittsburg, Tennessee
Cornbread is a Southern staple you’ll find on kitchen tables throughout the South, and cornbread lovers can get their fix at the National Cornbread Festival in South Pittsburg. The festival is home to the National Lodge Cast Iron Cornbread cook-off, but if you don’t feel like competing you can take a stroll down Cornbread Alley and sample a variety of cornbread recipes. 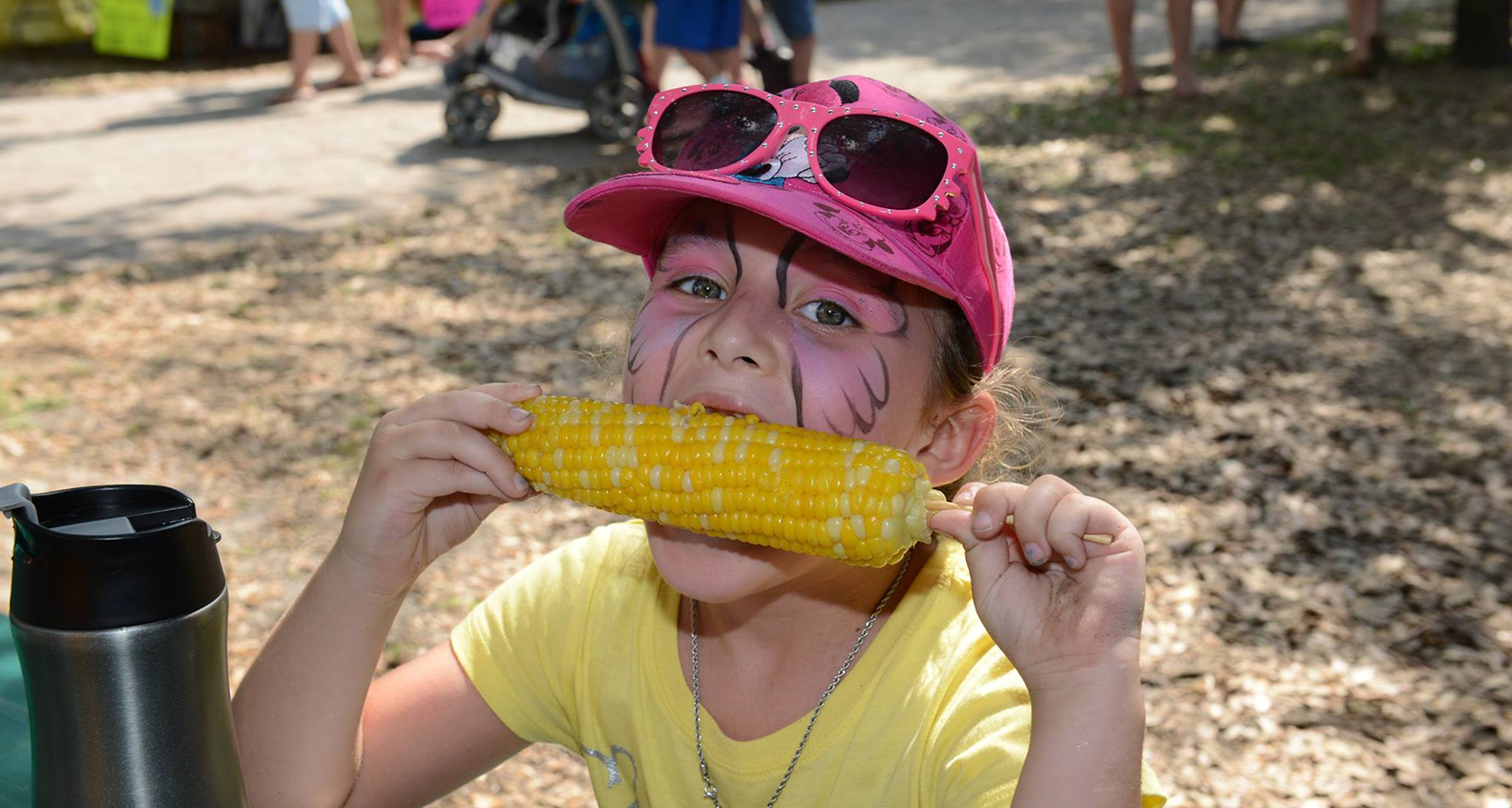 April 29:  West Palm Beach, Florida
A summer cookout isn’t complete without corn on the cob, and South Florida has dedicated an entire event to celebrate this popular summer vegetable. At the Sweet Corn Fiesta, attendees will be able to sink their teeth into as much fresh, sweet corn as they want, while listening to live music and strolling through the festival. The cornyness don’t end there; other exciting events that will take place during the fiesta include a corn-schucking contest for adults and kids, and the international corn-eating contest. Last year, Carmen Cincotti became a World Record holder and sweet corn eating champion after eating 61.75 ears of corn in 12 minutes.