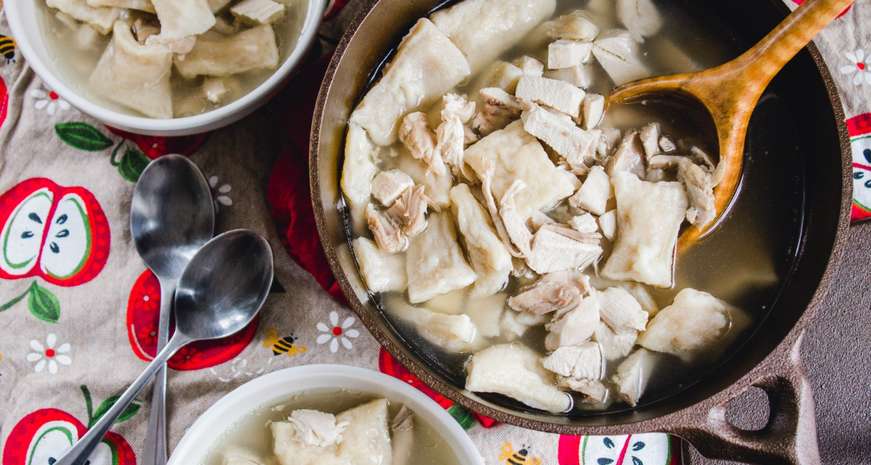 You've heard the story: Chicken and dumplings, a thrifty, belly-filling dish, was born of the Depression, a (relatively) quick and easy way to stretch meager scraps into a meal for a family. Or perhaps you've heard a similar tale, twisted up to fit neatly into a different time period — the Civil War — and spit out into another invention crafted out of poverty. These stories may sound romantic and, hey, somewhat logical, but here's the problem: They're simply not true.

Dumplings, or dumpling-like foods, have been around, and served with stewed meat of some kind, for centuries. Related to the boiled puddings that have been a staple of European cooking since before America was colonized, these hearty, floury dishes date back to at least 1600, and they've made appearances in American cookbooks since, as far as we know, Mary Randolf's 1836 cookbook "The Virginia Housewife." Many more "housewife" cookbooks over the decades of the 19th century mention recipes for boiled dumplings of some sort, most notably Lettice Bryan's "The Kentucky Housewife," which includes a recipe for rolled suet dumplings, served in a broth with shredded meat. (As is the case with all housewife cookbooks, though, it is important to note that most of these recipes were cooked and perfected by enslaved Africans and, later, African-American servants.)

The chicken part came a little later. In 1879, Marion Cabell Tyree published a cookbook called "Housekeeping in Old Virginia," which, with contributions from 250 of Virginia's "noted housewives" was almost a proto-Junior League cookbook. In "Housekeeping," you'll find two recipes for stewed chicken, one of which is simmered with "dumplings, made like biscuit but rolled thin." The stew is finished with a round of butter, rolled in flour and spices, which is used to thicken the broth. 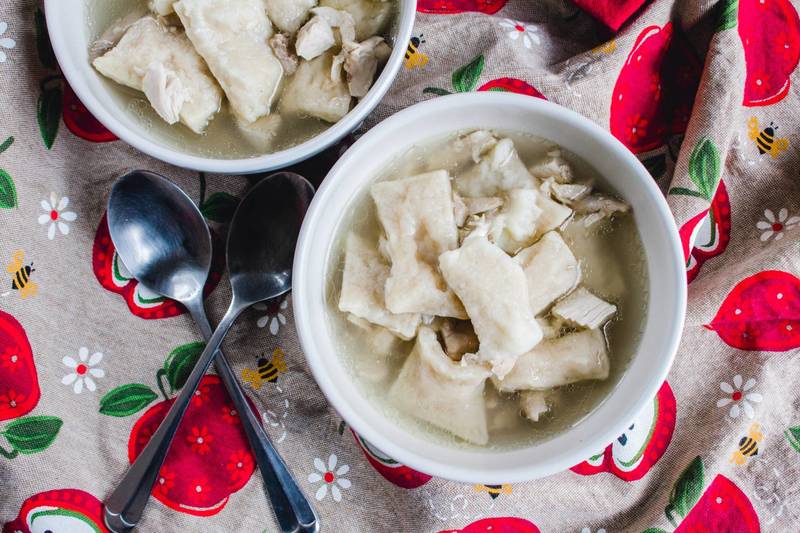 In these recipes, the chicken is simmered for hours to tenderize the meat and flavor the broth — another, albeit hidden, reason why those oft-told origin stories are wrong. It wasn't until relatively recently that chicken became a cheap commodity food. Most Americans raised chickens for eggs, so the animals themselves were valuable and only eaten on rare occasions. Since they were generally older, and absolutely free-range, these chickens had small amounts of breast meat and plenty of muscled, sinewy meat. These chickens needed to be cooked far longer than any worthwhile recipe will say today. And these recipes, simple by default, celebrated the subtle flavor of the chicken itself, unencumbered by extra vegetables, herbs or anything else. The dumplings just made it a full meal.

Southern Kitchen's Chief Merchant Sean Pruett shared with me an ultra-classic recipe for the dish that his Mammaw (a.k.a. great grandmother) called "dumplings and chicken" — the origin of the name switcheroo is obvious with one look at the pictures above. He remembers eating it at large family gatherings in Fort Pierce, Florida when he was very young, and just bringing up the recipe with his father, aunts and uncles has brought out memories upon memories.

His mother's siblings told him that Mammaw would serve dumplings and chicken most Sundays after church. "I just remember sitting at the bar on the back of the white chair ... watching amazed as her hands just dipped in flour and added milk and gave instructions to mom about whatever she was helping with while we had kids everywhere inside and out," wrote Pruett's aunt Sandy.

"Sunday was my favorite day," added aunt Terri. "We would go to Westside Baptist Church ... several of us would sit in the balcony and when the preacher started in we would sneak out. We went across the street to Williams Five & Dime. We got candy then we'd sneak back. After we would go to Mammaw's for Sunday dinner. We always had fried chicken and dumplings! ... Those days gave me a strong sense of family and some of the most precious memories I have." 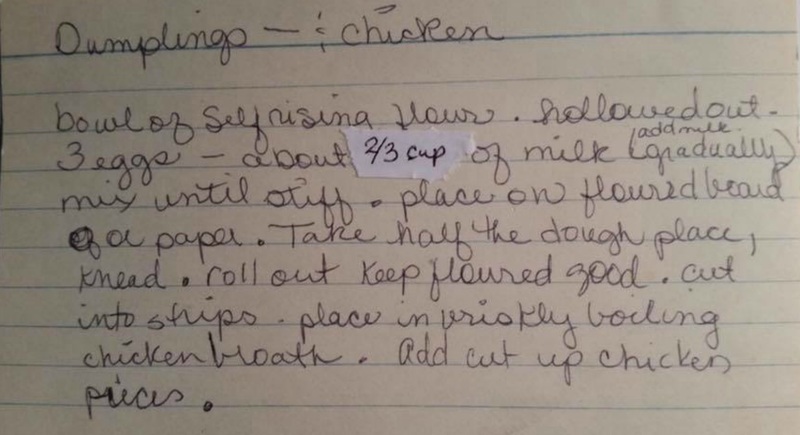 Mammaw's dumplings and chicken start with a bowlful of self-rising flour and end with a pot full of slippery, toothsome dumplings. Her recipe, pictured on the card above, isn't terribly specific, so I took a few liberties as I made it. I started with a whole chicken, cut into parts, in a pot of water with just a few aromatics. This I simmered gently until the chicken was cooked through, pulling the white meat out early to keep it from drying out. I strained the broth, keeping only the chicken meat and the golden elixir, with all of its fat and flavor. For the dumplings, I attempted to mimic other similar recipes I found online; none I saw used eggs and milk to bring together the flour, as Mammaw's does, but I went ahead with her judgment. (If you'd like to play around, try pouring in a bit of the broth instead of milk, and working in a few tablespoons of butter for richness.) The dough was easy to pull together and roll out, and I never had any trouble keeping the dumplings from sticking as I tumbled them into the boiling broth.

I likely used too much of that broth, by the way. Pruett told me that he remembers the dish being mostly dumplings, with just enough broth and chicken to turn it into a stew. But hey, you can serve those dumplings swimming in as much broth as you'd like, and save any extra bowls of the lightly thickened soup for another day. 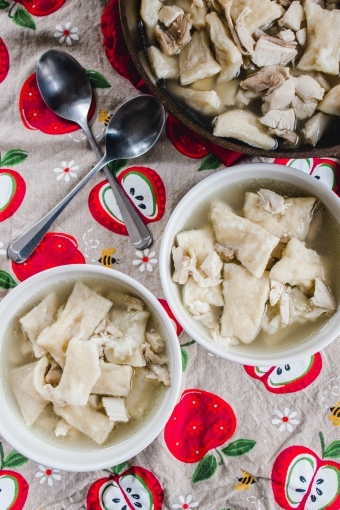 Dumplings and Chicken
Note: As written, this recipe makes basic, no-nonsense chicken and dumplings. While traditional as is, we like to add optional garnishes of parsley and freshly ground black pepper for (just a little) oomph. Feel free to add as you see fit.

Instructions
To cook the chicken: Combine the chicken parts, giblets, onion, carrot, bay leaves and kosher salt in a large stockpot. Cover with the cold water, place over medium-high heat, and bring to a low simmer. Simmer, stirring occasionally, for 40 minutes. Remove the breasts and transfer to a plate.

Continue to simmer the stock, stirring occasionally, until the broth is richly flavored and the remaining chicken is very tender, 50 to 60 more minutes.

Remove the chicken thighs, wings and drumsticks to the plate with the breasts.  Let cool to room temperature. Strain into a second large pot through a fine mesh strainer and season to taste with salt. Discard the remaining chicken parts and vegetables.

Remove the skin, bones and any large pieces of fat from the chicken. Shred or cut into bite-sized pieces.

Use the all-purpose flour to heavily flour a work surface. Transfer the dough to the floured surface and knead until smooth. Cut the dough in half.

On the heavily-floured counter, roll one half of the dough until it measures between 1/8 and 1/4 inch thick. Cut into strips about 1 inch wide and 2 inches long. Transfer to a floured baking sheet and repeat with the remaining dough.

Return the strained broth to a rapid simmer over medium-high. Add the dumplings and simmer, covered, stirring occasionally, until puffed and cooked through, 10 to 15 minutes. Add the chicken pieces, reduce the heat to low and cook just until heated through, about 1 minute. Serve hot, with optional garnishes (see note).

Chicken Tetrazzini: The story and recipe

Chicken Tetrazzini: The story and recipe