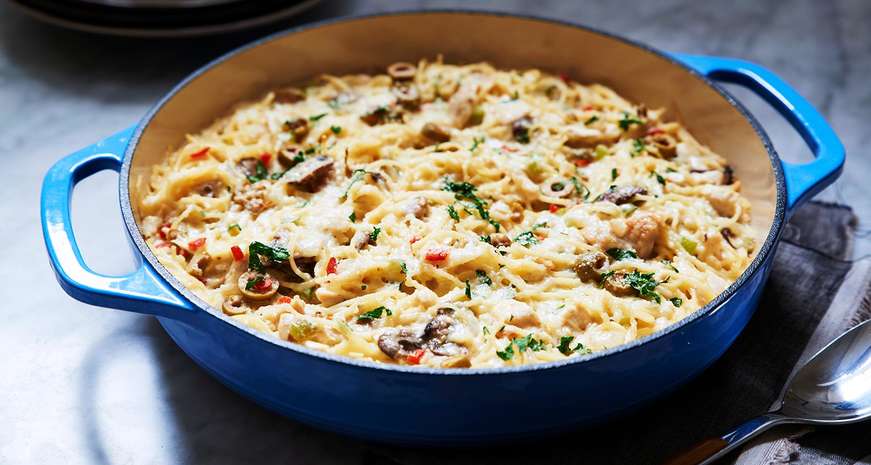 In my childhood home, ours was made from a freshly stewed hen, shredded and tossed with warm vermicelli, a homemade Parmesan cream sauce and baked until bubbling around the edges. It was company fare, maybe served on your birthday if you asked nicely. Just the sound of the word "Tetrazzini" evoked glamour and sophistication in what didn't always feel like a very sophisticated South.

The story for this recipe goes that it was named for Italian opera soprano Luisa Tetrazzini in the early 1900s. She was known as "The Florentine Nightingale" and visited America on tour. Her wildly popular, open-air concerts in New York and San Francisco attracted thousands of devoted fans.

In those days, chefs often named dishes on their menus after celebrities. And either at the old Knickerbocker Hotel in New York or the Palace Hotel in San Francisco -- it is still debated which was the originator -- the chef is said to have created a dish of chicken and cream sauce atop pasta, in honor of Tetrazzini's visit. From that day on, the comforting chicken casserole with the Italian name would become a part of the American home recipe box and morph into the recipe we know and love today.

Chicken or turkey both work in tetrazzini 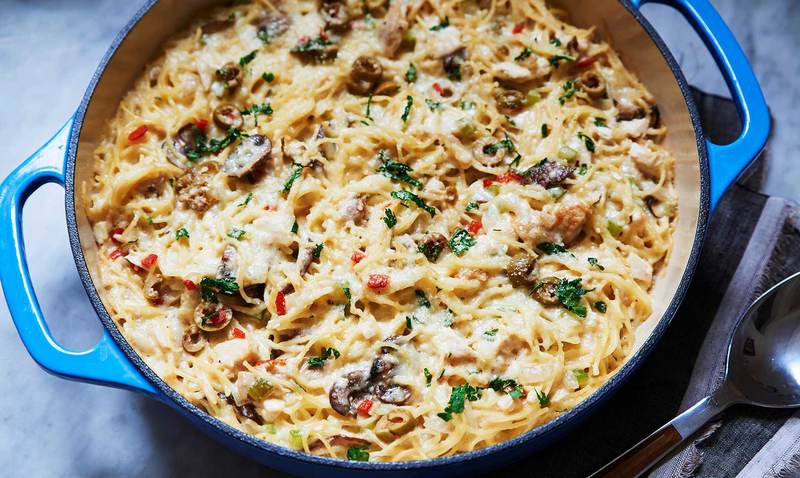 The crowd-pleasing tetrazzini can be made with either chicken or turkey. You can cook the chicken the old-fashioned way, by simmering a whole chicken or hen (slightly larger, better flavor) in water flavored with onion, bay leaves, salt and pepper, until done.

Let the chicken cool, then remove the meat from the bone and reserve about three cups of it for the tetrazzini. Or, use leftover roasted turkey. I love to make tetrazzini after Thanksgiving or Christmas, and I stash it in the freezer to heat up for dinner in the cold-weather months ahead.

Chicken seems to be the original ingredient over turkey, but it doesn't really matter. The real star is the sauce. That's what pulls the ingredients together -- a simple white sauce, made by melting butter, stirring in flour, and then whisking in chicken broth and cream. You create what the French call a bechamel, or most home cooks call a white sauce. And when you add grated Parmesan, salt, pepper, and a dash of sherry, you might as well call it heaven.

This sauce is what has made Chicken tetrazzini unique ever since recipes for it were first shared in newspapers in the early 1900s. The Chicago Tribune shared one in 1911. And by the 1920s, recipes contained sautéed mushrooms, too. By the 1950s you’d find the recipe jazzed up with olives or pimento, and in the 1960s, cooks wanted to forgo the homemade sauce and add a can of cream of mushroom soup instead. But it's comforting to know that, in spite of these recipe detours and using elbow macaroni instead of the usual vermicelli, this go-to casserole has deliciously survived.

That might have to do with the fact that covered-dish suppers require a casserole, and tetrazzini is a fan favorite. One of my favorite explanations on the popularity of bringing a casserole to an event precedes the recipe for Chicken tetrazzini in the late Helen Exum's 1970 Chattanooga Cook Book: "More and more, the covered-dish supper is becoming one of the most convenient ways for people to get together and have dinner. It works for large church dinners, for gourmet clubs when the menu is planned way ahead, for neighborhood gatherings, and for buffet suppers in honor of special guests."

Chicken tetrazzini in my kitchen today 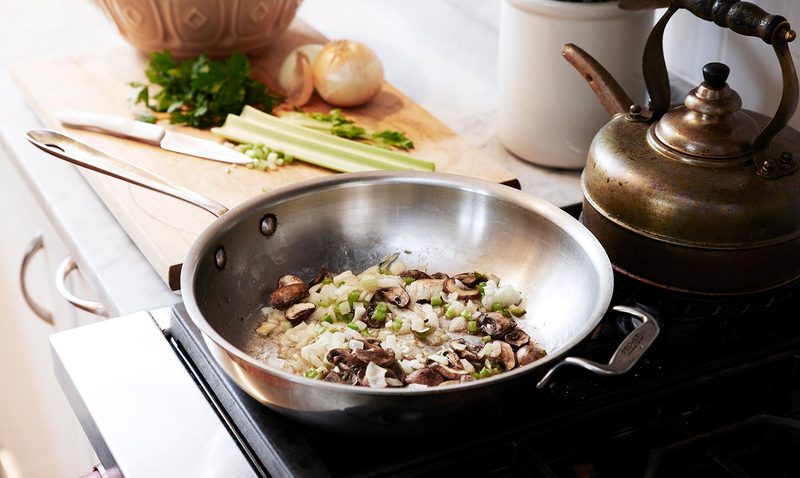 There was a recent time when I thought casseroles were just too much trouble to make. Too many steps. Too many dirty pots and pans to wash for just one dish. So I pretty much took casseroles out of my repertoire, favoring quicker recipes like grilled fish, steamed rice, a fast pasta and sauce, if you know what I mean.

I'm getting back to my favorites, as I now realize these recipes have lasted 100 years or more because they taste good, people love them, they are comfort food to the highest degree, and they can be made ahead and frozen to bake at the last minute. You gotta love a good casserole for offering that to your busy life!

But I only returned to the best of casseroles, meaning no canned soup, no mayonnaise and no crushed potato chips on top. These might have worked in my mother's era, but I have moved on. The Chicken tetrazzini recipe I share today embodies the best of chicken casseroles, as suitable today as yesterday.

You begin with chicken (or turkey) and you can cook yours fresh, or buy a supermarket-cooked rotisserie chicken and shred the meat. You can use store-bought or homemade chicken broth, and vermicelli or spaghetti, cooking the pasta by the package directions. 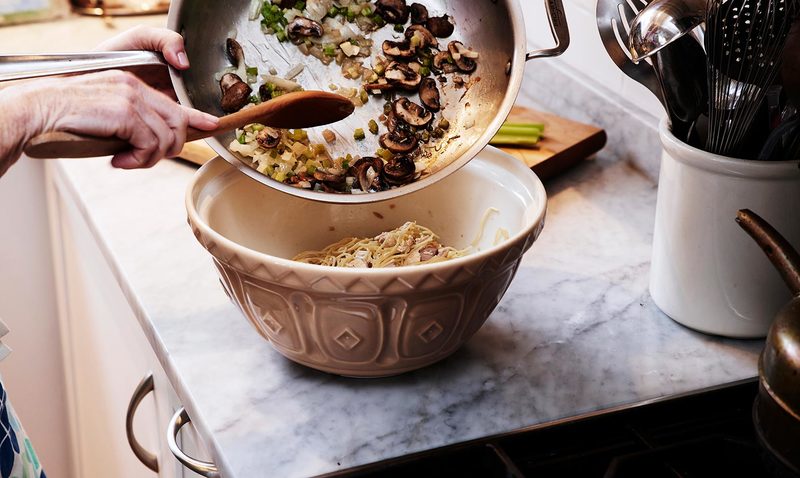 Make the easy sauce and add the flavorings to suit your palate. Add some cayenne, and a pinch of nutmeg, if you like. Use the sherry to pick up the sauce, but if you don't have sherry, add white wine instead. Use the best mushrooms you can find -- either white, cremini or baby Bellas – and add or omit the green olives. But do take the time to toast some chopped pecans to scatter on top just when ready to serve. (I have found if you add the pecans before baking, some will burn and others get soggy sitting in the casserole and its juices.) 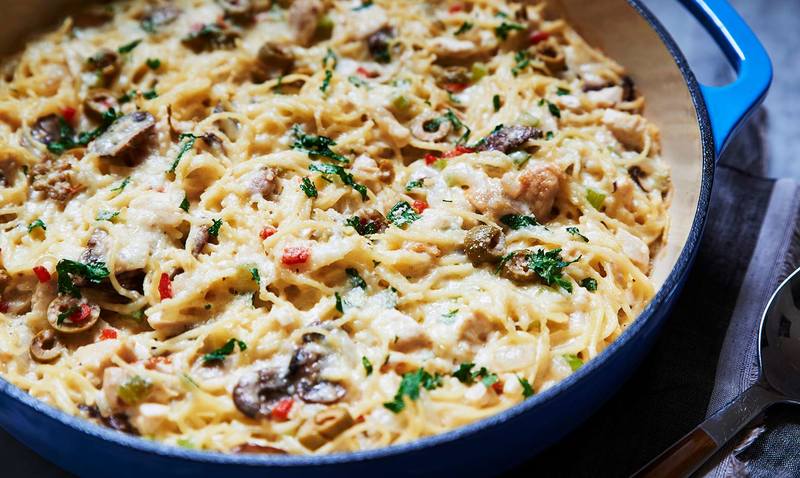 I hope you agree that Chicken tetrazzini is perfect for January, February, March and pretty much any month of the year. It is not Southern in origin, and yet it is a casserole that has been embraced by Southerners who love to entertain. Add a green salad and rolls, and this casserole, named for the opera singer who fascinated America more than a century ago, will fascinate you as well!

Instructions
Arrange an oven rack to the center position and heat the oven to 375 degrees.

Bring a large pot of heavily salted water to a boil over high heat. Stir in the pasta, reduce the heat to medium-high, and cook, uncovered, until just al dente, about 6 minutes. Drain well, shaking to remove excess water, and transfer to a large bowl. Stir in the chicken.

Stir in the cream and sherry, season with salt and pepper, and continue to cook, stirring, until the sauce comes just to a boil, about 2 minutes. Remove from the heat and stir in 1/2 cup of the Parmesan, along with the olives. Pour the sauce into the bowl with the chicken and noodles and stir to combine.

Transfer the chicken mixture to a 9- by 13-inch baking dish or a large round casserole. Sprinkle with the remaining 1/2 cup Parmesan. Bake until the casserole is bubbling, 25 to 30 minutes. Let rest for 10 minutes.

Scatter with the toasted pecans and serve.