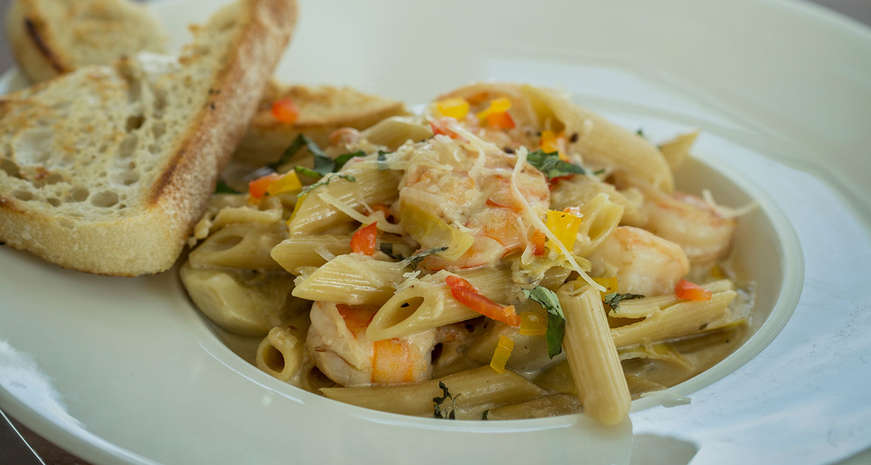 Get to know the coastal cuisine of Georgia’s Golden Isles

While Charleston and New Orleans may get most of the press, they're not the only important coastal cities when it comes to eating and drinking in the South. The cities and towns in Georgia's Golden Isles are also heavy hitters. Read on to learn what their cuisine is all about.

Nestled on the Georgia coast, halfway between Savannah and Jacksonville, sits the mainland city of Brunswick and four breathtaking barrier islands dubbed the Golden Isles: St. Simons Island, Sea Island, Little St. Simons Island and Jekyll Island. Miles of marshland peppered with small islands known as “hammocks” define this unique coastal landscape and give birth to some of the country’s best seafood, with wild Georgia shrimp at the forefront.

According to the Georgia Shrimp Association, the shrimp’s sweet taste and firm texture is produced by its food source — nutrients supplied by the clean, coastal Spartina marshes and estuaries, whose strong tides and natural filtration system define the southern Atlantic Coast. St. Simons, the largest barrier island in the Golden Isles with its dozens of fresh seafood spots, is a good place to start delving into Southern coastal cuisine.

The King and Prince Beach & Golf Resort features the island’s only oceanfront restaurant, ECHO, and is open to the public. With Chef James Flack at the helm, the restaurant changes its menu two to three times per year based on the availability of local ingredients and offers up everything from beef bone marrow with parsley and mayhaw jelly, to boudin-stuffed poulet rouge with creamed radishes and grilled artichokes. 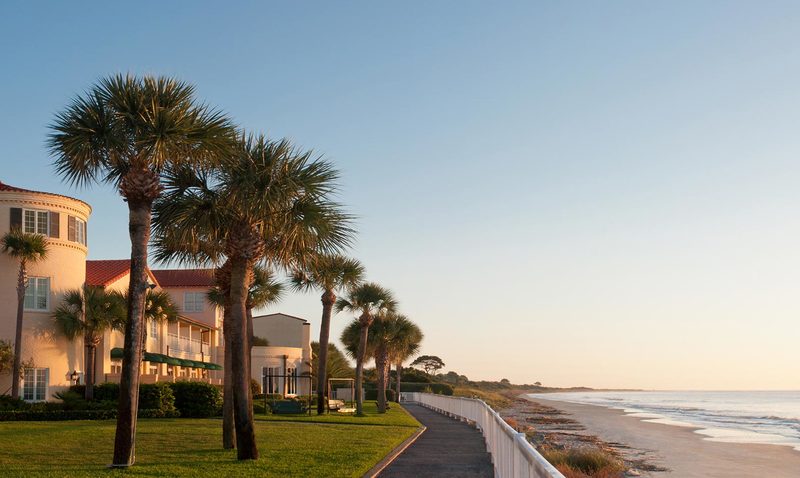 With an eclectic array of hotel guests visiting from all over the world, Chef Flack must create dishes to appeal to all walks of life while still utilizing local ingredients and keeping with the tradition of Southern coastal cuisine.

“Most of our shrimp comes from City Market, and our crab meat and fish comes from Eckerd Seafood, both in Brunswick,” Chef Flack explained. “Our chicken is local from Springer Mountain and we get our clams from Sapelo Island, a small barrier island only accessible by plane or boat.”

City Market has been a family-owned and operated Brunswick tradition since 1948. For nearly 70 years, the wholesale and retail seafood business has supplied local shrimp from the nearby docks to most of the area’s top restaurants. It even ships overnight for those not lucky enough to live on the water.

Pretty much anywhere you go on the Golden Isles, Wild Georgia Shrimp is a menu mainstay. Iguanas Seafood Restaurant in the historic Pier Village on St. Simons Island offers up everything from bacon-wrapped shrimp to peel-n-eat to blue lump crab cakes — a coastal favorite.

Another popular seafood locale on the Golden Isles is Halyards Restaurant, also on St. Simons Island, where its mantra is: “We never proclaim a few things to be fresh when everything we serve is prepared that way.” Owner and Executive Chef Dave Snyder established the longstanding eatery in 2000. He also owns Tramici Neighborhood Italian Restaurant, which he opened in 2006.

“Our big passion is fish,” said Snyder, who graduated from the New England Culinary Institute in Vermont, and got his start at a slew of restaurants in Manhattan and Atlanta before going out on his own. “I actually sit on an advisory panel for the snapper-grouper species within the South Atlantic Fish Management Council,” he said. The conservation and management organization targets 3 to 200 miles off the coasts of North Carolina, South Carolina, Georgia and Florida. “We have a lot of passion for conservation and using fish, when we can get it, from our local fishermen.” 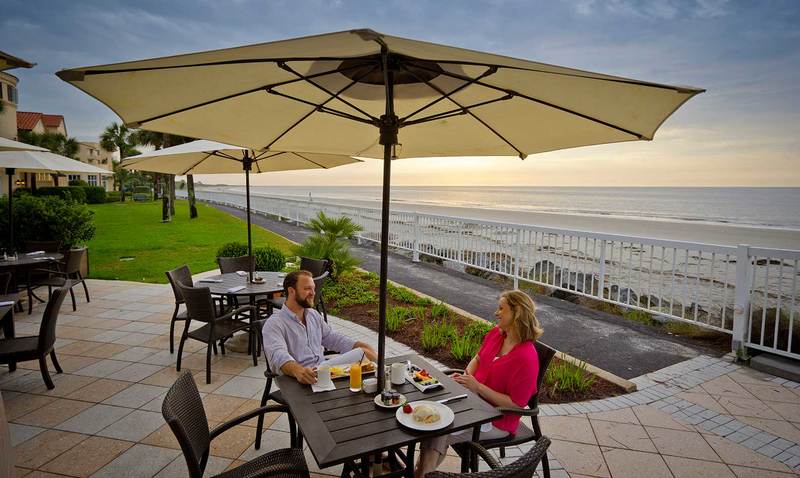 When he’s not on the water himself, Snyder looks to local fishermen to bring in the freshest fish the coast has to offer. Depending on the season, this can mean everything from snapper and grouper to pompanos and black sea bass. Snyder lets the waters determine what goes on his menu.

“This week, we got some African pompano that was literally six hours old,” he said. “We have a couple of local fishermen who fish in state waters and we’re getting triple tail right out of the live well. It’s literally alive when we get it. Our huge passion is finding a balance between sustaining the population and giving our guests what they want.”

Because most of the Golden Isles rely heavily on tourism dollars to survive and thrive, Snyder said that there are times when Georgia and the surrounding coastal states can’t offer up as much as they’d like in the form of local ingredients.

“We don’t have as many farms as Atlanta, Charleston, Charlotte or those other markets,” he said. “We only have three local farms within 30 miles, so, for us, it’s a challenge to get things. Right now, we’re getting a lot of good stuff from those farms, but that will dwindle in August when it gets too dang hot here.”

Halyards’ dinner menu features a laundry list of local fish offerings including American red snapper with oyster stew, Carolina Gold rice and corn-fried oysters. The wild Georgia shrimp and Canewater Farm grits with Cochon Butcher andouille, tomatoes and cremini is one of the eatery’s most popular items. Canewater Farm mills organic corn on its family farm in the Appalachian mountains of North Georgia. It also grows Asian greens like mizuna and bok choy.

“There was a lot of Asian influence here years and years ago when a lot of immigrants worked the canal system with the rice fields,” Snyder said. “This was about 100 years ago. If you drive off Highway 17 — about 25 miles north of St. Simons Island — you’ll see the rice fields just south of Darien.” 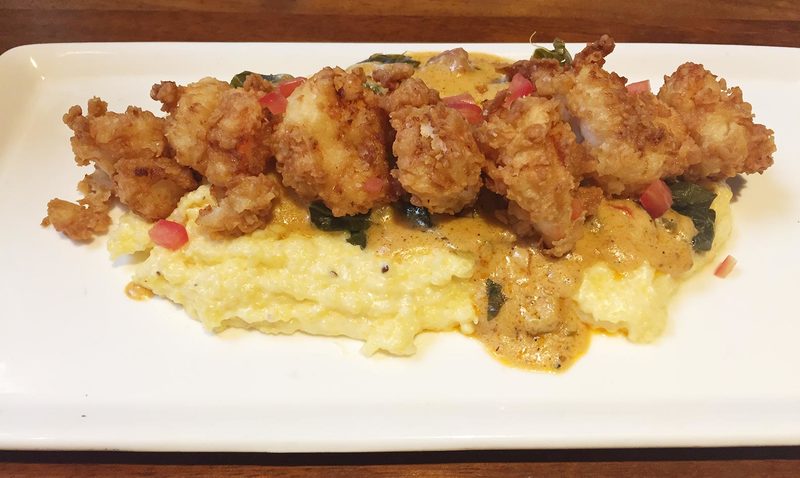 For those planning a trip to the Golden Isles and worried you might be going at the wrong time of year to enjoy local flavors, forward-thinking chefs like Snyder have got you covered, as Southern coastal cuisine has no timeline and its dance card is never full.

“The day before yesterday, I bought 3,000 pounds of local shrimp to put up into the freezer, so we don’t run out when the market runs out,” he said. “Chances are, in August, the market will run out of local shrimp. That assures us that we’ll have Georgia whites to see us through.”

From traditional Southern comfort food utilizing fresh seafood and locally grown produce like purple and yellow wax beans, to Asian influenced spices and sauces, the Golden Isles offer a bounty of the sea with innovative, chef-driven techniques. One could spend an entire lifetime eating around the coastal waters of the South without ever fully understanding the unique ingredients and culinary techniques that make each locale one-of-a-kind. But it’s still worth a try, right? 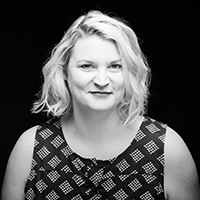 Kara Pound is a professional writer who recently left a sweet gig as Director of Communications at a craft distillery to get back to doing what she loves best . . . carefully crafting words that tell a story about a person, place, or thing. A writer by day and a mom and music lover by night, Kara’s work has been published in INKED, Florida Trend, Florida Design, Artisan Spirit Magazine, and Jacksonville Magazine. She is currently a resident of St. Augustine, Florida a.k.a. the Nation’s Oldest City and gets mild road rage when stuck behind horse-drawn carriages on the bay front.