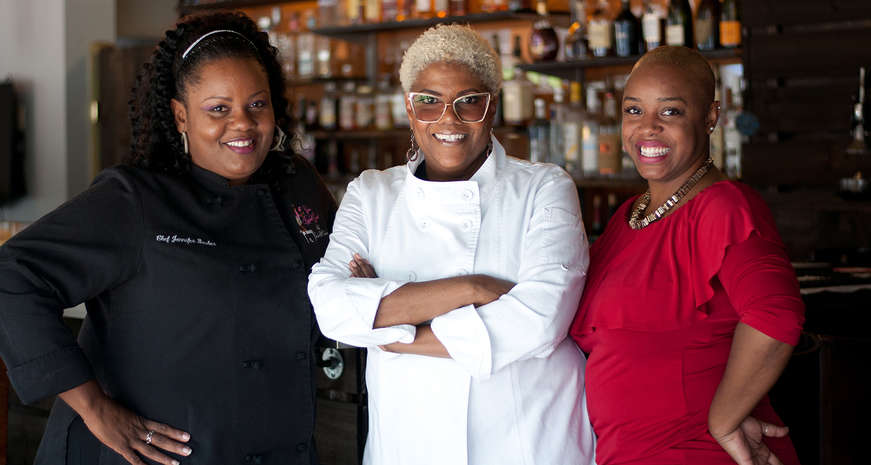 Dinner, drinks and a discussion about soul food myths

The ladies behind the Cast Iron Chronicles, Chef Deborah VanTrece, Chef Jennifer Hill Booker and Mixologist Tiffanie Barriere, are switching up the conversation for the second dinner in their three-part series. On January 15, Martin Luther King Jr. Day, the women will be honoring Dr. King while discussing soul food. The six-course collaborative dinner and cocktails will be paired with a conversation about the myths of soul food in the culinary industry.

Soul food, of course, has deep roots in the South, and this discussion will dive deep into cross cultural divides and explore traditional soul food from around the world. It will make diners question the impact of soul food on American cuisine while enjoying dishes like chitterling sausage with apple beet slaw and cornbread brioche, crawfish quenelles with low country consommé and Cajun blue crab powder, and yeast rolls with black strap molasses butter. Make sure to leave room for desserts like red velvet cake and whipped cream cheese souffle. And, of course, there will be plenty of innovative cocktails created by Barriere.

While the Cast Iron Chronicles is a dinner series, its reach extends further than the table. The proceeds from the events go toward the James Beard Foundation’s Women's Leadership Program. The organization is focused on addressing “the most pressing issues female chefs face, offering the tools to move beyond simply being a great chef and becoming a successful business owner.”

Original Story: An evening filled with delicious food, cocktails and a conversation about the soul of the culinary industry is what you will find at the upcoming "Cocktails, Cuisine and Conversations" event. On December 4, mixologist Tiffanie Barriere, chef Deborah VanTrece and chef Jennifer Hill Booker will be kicking off the three-part series, "The Cast Iron Chronicles," with a dinner and cocktails at Twisted Soul Cookhouse & Pours in Atlanta, Georgia.

During the dinner, each Southern-inspired course will be paired with a cocktail and poetry, which will lead the discussion about the soul of the culinary industry, its history, the challenges minorities (specifically women and African Americans) have faced, and the road to success today.

For the past twenty-five years, VanTrece has been serving up global soul food from different cultures around Atlanta. Her philosophy is to cook great food with a clear vision, which is reflected in the kitchen at Twisted Soul. Along with VanTrece, Booker will be adding her touch to the meal. Known for her modern and healthy Southern cuisine, Booker has been a culinary trailblazer, not only as a chef but also as a cookbook author and reality television personality and culinary educator. Barriere (also known as "The Drinking Coach") will be mixing up the cocktails at the dinner. She has been crafting innovative cocktails throughout Atlanta for almost a decade and is one of Southern Kitchen's favorite bartenders to follow on social media.

All three ladies will be leading the conversation while celebrating and sharing their culinary journeys with the guests at the event. The Cast Iron Chronicles will continue with two other events and conclude at the James Beard House in February.