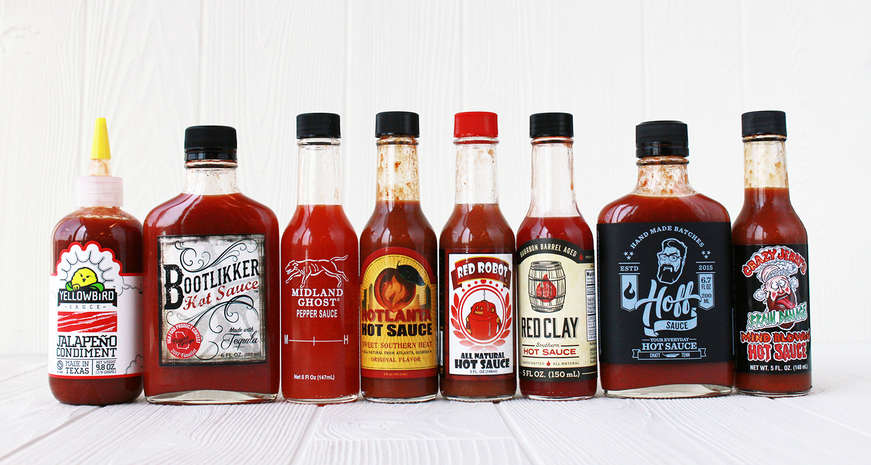 But while you'll certainly find at least a bottle or two of these well-established brands in each of our kitchens, they aren’t the only kids on the block — there are countless options as soon as you start digging into small-batch sauces. For this taste test, we ordered as many Southern artisanal hot sauces we could find.

Our testing process and criteria
We wanted to see how these eight hot sauces stood up to our ideal version of hot sauce — one that was flavorful with a good level of heat that builds without overpowering the flavor of the sauce. The idea of tasting hot sauce by itself was very unappealing — we started sweating just thinking about it. We floated around the idea of sampling the sauces with chicken tenders, but we felt that the flavor of the chicken would overshadow or skew the flavors of the hot sauce. In the end we went with a more neutral-flavored food product — steamed white rice — as the vehicle for this taste test. For each sauce, our judges poured a little amount of sauce over rice before they tasting it. We put our palates at risk to try these hot sauces, and we’re happy to report it was worth it.

Our judges were asked to rate each hot sauce on a scale of 1 to 5 on taste/flavor, aroma and overall ranking. We tallied up the results from our eight judges and the highest possible score a hot sauce could receive was 120.

Below are the results of our hot sauce taste test, ranked from least enjoyable to you-should-all-go-out-and-buy-this-now. 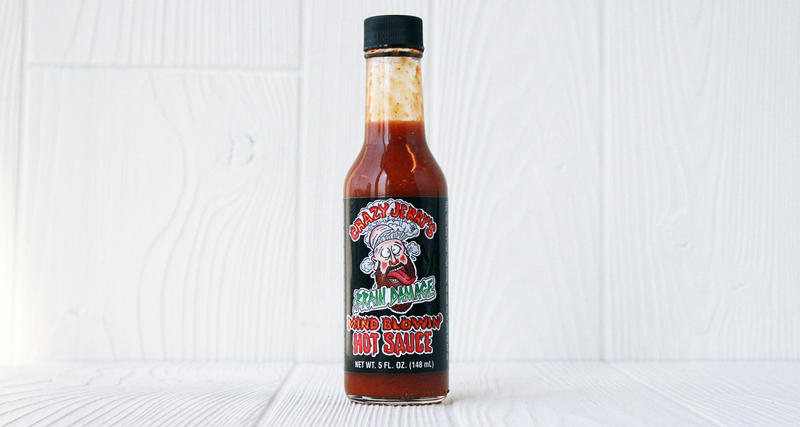 Crazy Jerry’s
As soon as this hot sauce touched our tongues, our mouths were on fire. Yes, you want heat in hot sauce, but this was out of control. One taster simply commented it was “GROSS.” Another commented “I don’t even know,” after trying this sauce. Unlike other sauces we tried, this sauce was overly thick. A quick look at the ingredient list showed that mandarin oranges and mango, along with chile peppers, contributed to its thicker-than-normal consistency. Before the heat took over, there was a hint of sweetness in the sauce before the burning began.
Score
Taste: 10 Aroma: 12 Overall: 11 Stars: 1.375 out of 5
Total: 33 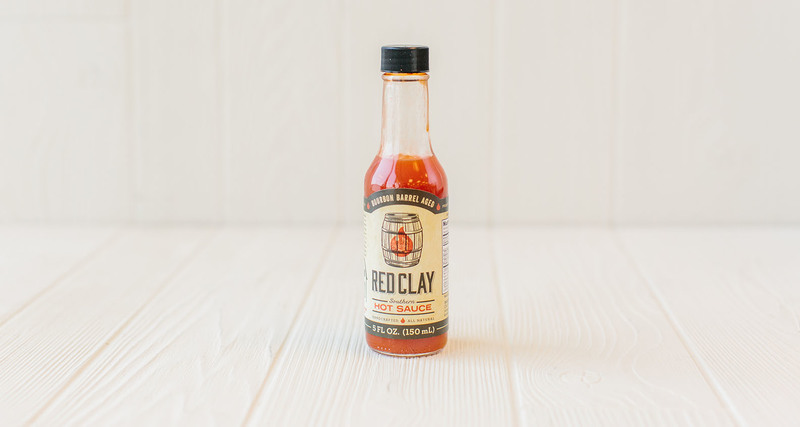 Red Clay
Even though it was aged for two months in bourbon barrels, this hot sauce from Charleston, South Carolina was very bland. The level of heat wasn’t impressive and it passed for a very average hot sauce. One very pessimistic taster asked, “Why does this exist?” One taster commented, “It was very runny, very red and very vinegary.” You would think that an almost neon red hot sauce would have more heat and flavor, but it just wasn’t there. Another taster commented it had a “very jalapeño aroma,” but that flavor didn’t come through in the sauce. After tasting this sauce one judge said “it was pretty good, but needs more flavor.”
Score
Taste: 19 Aroma: 18 Overall: 22 Stars: 2.75 out of 5
Total: 59 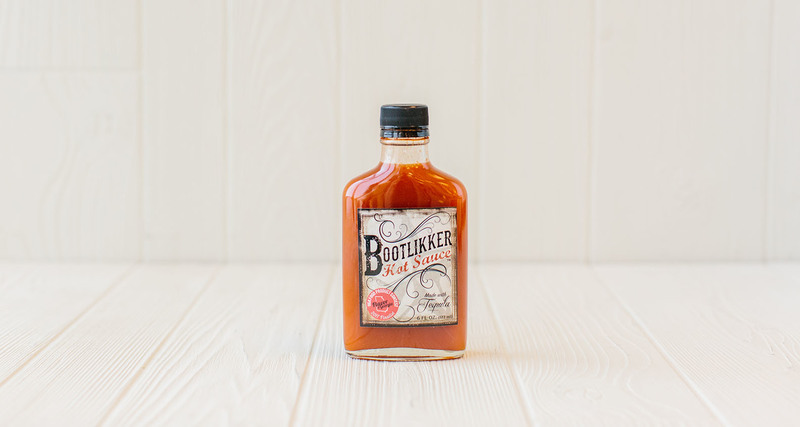 Bootlikker
For over a decade, Tommy Wood has been making this hot sauce in Georgia. Wood keeps his recipe locked up, but revealed to the Atlanta Journal-Constitution that the hot sauce contains pickled jalapeños and tequila. Unlike Crazy Jerry’s, this hot sauce was very runny and kind of bland. One taster commented, “It tastes like buffalo wing sauce and smells like buffalo wing sauce, instead of hot sauce in general.” Bootlikker was a 2017 Flavor of Georgia Finalist and we thought it was a good hot sauce overall. Another taster said: “I think I like it, but I’m still recovering from Hot Sauce D [Crazy Jerry’s.]"
Score
Taste: 21 Aroma: 21 Overall: 23 Stars: 2.875 out of 5
Total: 65 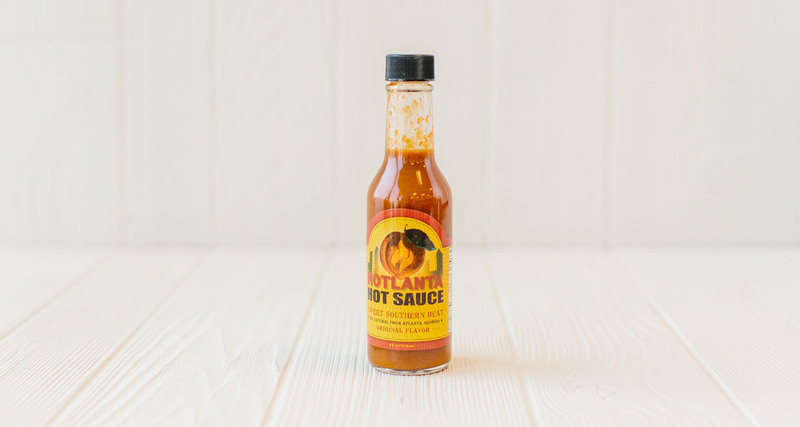 Hotlanta
Made in its namesake city, Atlanta, this hot sauce is made with chiles, spices and peaches for a touch of sweetness. The spices are visible when you look at the bottle and we definitely tasted them when we tried this hot sauce. "It's smoky and peppery," one taster said. Although we got some heat and a little flavor, there seemed to be something slightly off with this hot sauce. "Tastes like... bad? Not hot just not good," another taster commented. After tasting it, another taster commented: "Burnt and stale tasting." One final comment on this hot sauce summed up our experience with this hot sauce: "Kind of funky tasting," a taster said. Despite these comments, it still managed to eke out Bootlikker's sauce.
Score
Taste: 20 Aroma: 23 Overall: 23 Stars: 2.875 out of 5
Total: 66 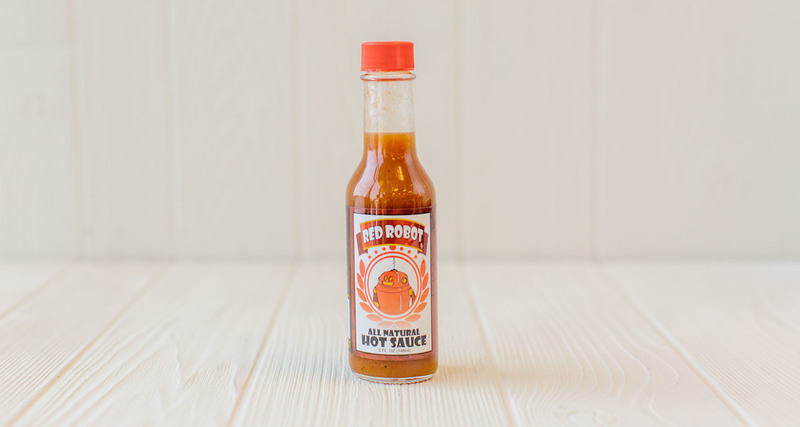 Red Robot
Before trying this hot sauce from Georgia, we found that it wasn’t the most attractive. The muddy reddish brown color of the sauce wasn’t appealing at all; however, you could see bits of spice and pepper, which meant we were in for some flavor. Made with whole roasted ripe jalapeños, onions, fresh garlic, cilantro, sea salt and vinegar, the flavor definitely solid. Our tasters found an average level of spice in the sauce as well.
Score
Taste: 23 Aroma: 21 Overall: 25 Stars: 3.125 out of 5
Total: 69 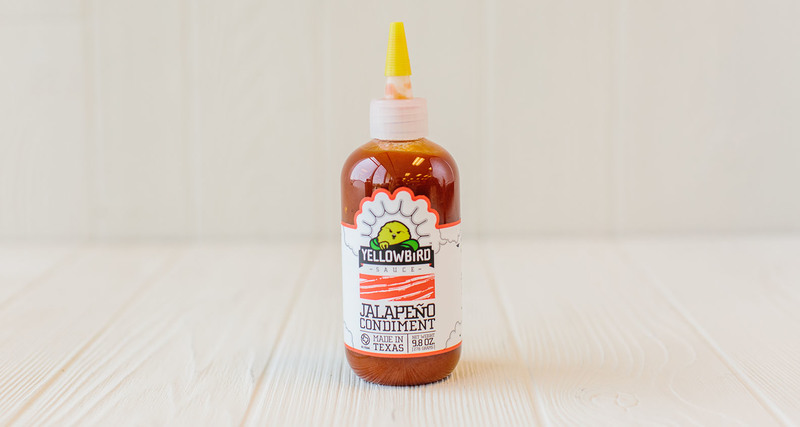 Yellowbird
Recommended by Southern Kitchen Online Buyer Josh Conner, Yellowbird hot sauce was more sriracha-like than your standard hot sauce. It also tasted like the rooster sauce. One taster commented: “Thick, sriracha-like and would def put on eggs.” One taster was adamant this condiment couldn’t qualify as hot sauce: “Not really that spicy. Not hot sauce.” However, another wrote that the sauce had great flavor and “was a little sweet and garlicky.” It also had a smokiness that added to its appeal.
Score
Taste: 29 Aroma: 25 Overall: 28.5 Stars: 3.56 out of 5
Total: 82.5 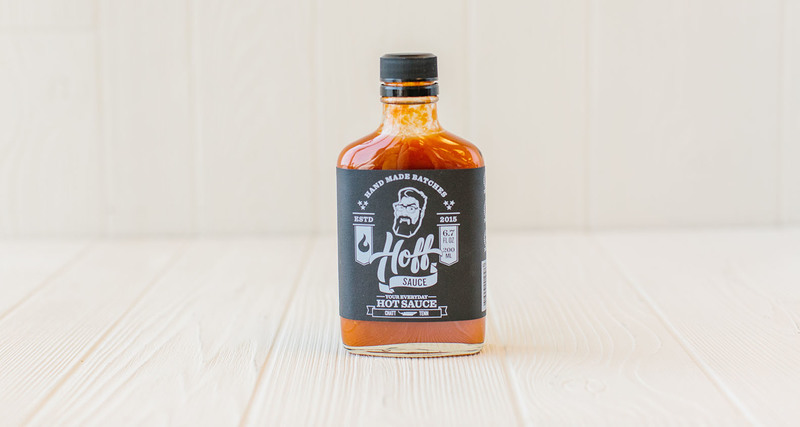 Hoff Sauce
Although it didn’t come in first place, this was a favorite hot sauce among the Southern Kitchen staff. Made in Chattanooga, Tennessee, Hoff Sauce has also taken home various awards. One taster said it had “the ideal consistency for a hot sauce.” Thicker and darker than other hot sauces we tried, we found it had a great balance between heat and flavor. “Took a second, but then it slapped ya! Would eat it again,” one taster said. Another taster said it had a “great smoky flavor with heat that builds but doesn’t burn.” The heat was a little too intense for some of our tasters (“Coughing with how spicy it is”), but for the most part we really liked this sauce.
Score
Taste: 29 Aroma: 29 Overall: 28 Stars: 3.5 out of 5
Total: 86 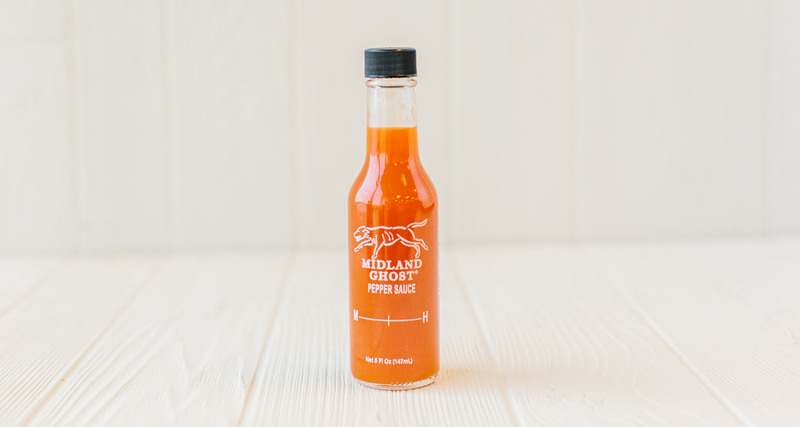 Midland Ghost
After a shipping snafu, we almost didn’t get to taste this hot sauce. Luckily, the four "Saucerers" at Midland Ghost made sure we got the sauce in time to taste it. This hot sauce had a bright red neon color and was very thin. “It tastes like Tabasco,” one taster commented. The level of heat was just where we liked it to be, and it continued to burn slightly while we were eating. Although the sauce is made with ghost peppers, its flavor wasn't overwhelmed by the heat of the peppers. As one taster put it, “This is what hot sauce should be.”
Score
Taste: 27 Aroma: 31 Overall: 32 Stars: 4 out of 5
Total: 90

A final note on spice levels
While we think that flavor is paramount when choosing a hot sauce, and we usually won't purchase a sauce based on heat level alone, we did want to know the spice levels of each sauce. Tasters were asked to rate each hot sauce on a level of 1 to 5, 1 being mild and 5 being so hot you’ll never be able to eat again. Here are the results of those rankings.