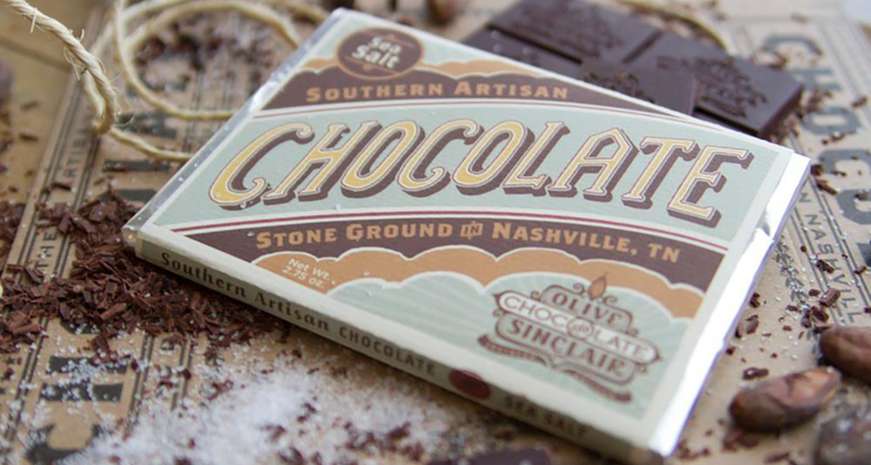 Chocolate, we admit, is one of those things that can be from anywhere, as long as it’s delightfully indulgent and delicious. Still, considering how pretty much everything Southern is a little bit sweeter, wouldn’t it be extra-nice to satisfy your sweet tooth with chocolate made in the South? One look at the list of Southern chocolatiers below and you’ll have an answer to that question, and probably a box of chocolates purchased and headed your way.

Whether you want festively fancy assortments of designer desserts, or the natural flavor of bean-to-bar newcomers, it's time to officially bring the Southern American chocolate trade into your home.

Olive & Sinclair in Nashville, Tenn.
When you’re serious enough to put a trademark behind what you’re making, you know you’ve got something good. Calling itself Southern Artisan Chocolate™, Olive & Sinclair’s products are made with low-roasted cacao that’s stone-ground using an early-1900’s method and sweetened only with pure cane brown sugar. The process creates a sweetness whose slow creation you can almost taste in the Mexican-style Cinnamon Chili, Buttermilk White Chocolate and other bars. They also make cacao nib brittles in bourbon and smoked flavors, and even make duck fat caramels, for those occasional times when chocolate just isn’t enough. 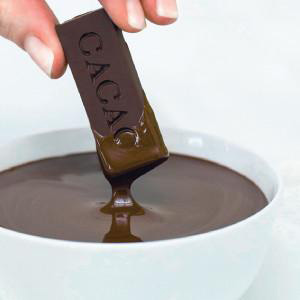 Calling itself “origin-driven,” the confections and chocolates made by this popular Atlanta company are created with the help of scientists and local growers who handle the entire process with actual hands, and their focus on quality is apparent all the way to the classy packaging. Cacao’s dark chocolate Aztec Aphrodisiac bar has a six-chile blend of signature spices, which builds a gentle heat that balances with the sweetness of the 60% dark chocolate mixture. For adventurous tastes there’s the Ginger Pink Peppercorn bar, and for the undecided there’s the six- or 12-piece Epiphany collection of ganache chocolates; in each collection you can choose all of the chocolate types inside, from Tequila Sea Salt to the tea and aperitif Earl Grey Aperol.

Condor Chocolates in Athens, Georgia
Run by two brothers — a chef and an agriculturist — whose summers were spent visiting family in Ecuador, this “bean-to-bar” story began with their parents’ intercontinental love, and evolved into a passion for the cacao they grew up eating in their mother’s homeland. The parents moved to Athens, Georgia, the boys matured, and eventually decided to open a small shop, in the city’s Five Points neighborhood, that creates and sells bars, truffles, sipping chocolate, gelato and various confections. Condor Chocolates collaborated with popular Athens-based beer company Creature Comforts on a chocolate bar inspired by the brewery’s Koko Buni milk porter, but when it's not creating amazing collaborative chocolates the company is mixing Ecuadorian chocolate with tastes of lavender and honey, rosemary-mint, grapefruit-jasmine and more. 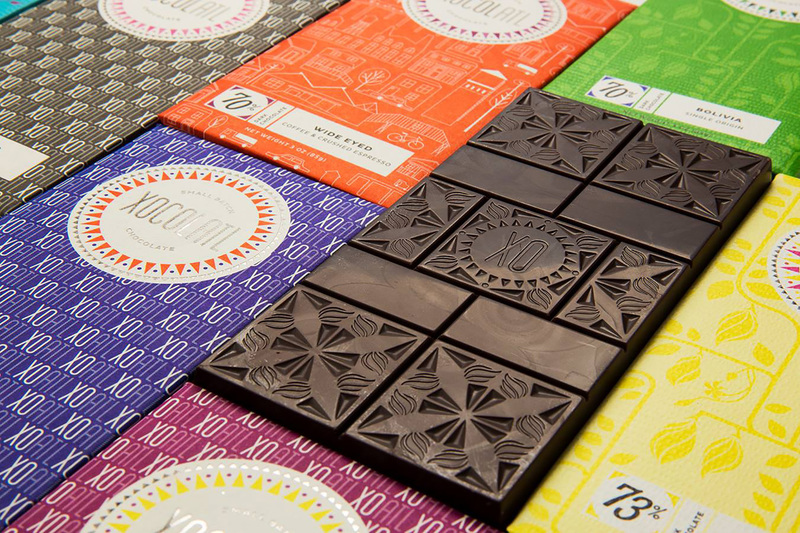 Xocolatl in Atlanta, Georgia
You can smell what’s cooking at the Xocolatl Small Batch Chocolate Micro-Factory wherever you are inside Atlanta’s Krog Street Market, but the aroma is most blissfully intense right outside the storefront, where it’s difficult, if not impossible, to avoid trying to get a glimpse of what kind of wonderful things are happening behind the scenes. Perhaps the only thing naturally sweeter is the story of the founding couple behind the chocolate company, who quit their jobs, took their first child and baby-on-the-way to Costa Rica, and learned how to make ethically- and sustainably-grown craft chocolate. The gluten- and soy-free bars are vegan and made from hand-picked whole beans from East Africa and all across the Americas. Cooler heads will say their Mint Chocolate Chip bar prevails, while those who enjoy spicier flavors will enjoy the Jamaican jerk and creamy coconut-milk-mixed Soul Rebel dark chocolate bar 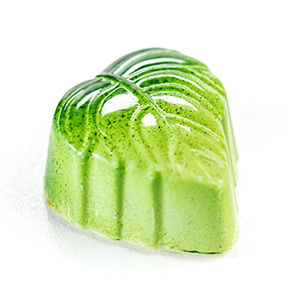 Phillip Ashley Chocolates in Memphis, Tennessee
Handcrafted in small batches by a Phillip Ashley Rix, a self-taught chocolatier, these fair-trade designer chocolates have become celebrities in their own right, appearing at official events for the Grammys, the Oscars, and The James Beard House, and selected as gifts for clients ranging from corporations like Disney and FedEx to the legendary Stevie Wonder. That’s in part because each hand-painted chocolate could easily pass for ornate jewelry, such as the leaf-shaped, green-to-yellow gradient-hued bite of sage, fennel, caramel and sea salt. It’s not just taste bud escapism, but it’s also seemingly made to match your favorite dinner dress or jacket. Whatever your flair or flavor, there’s something in the Phillip Ashley collection that’ll go with whatever you’re in the mood to enjoy.

Christophe Chocolatier in Charleston, South Carolina
Created by Christophe Paume, a third-generation French chocolatier and pastry master raised in his father's Toulouse patisserie, these fine chocolates exemplify the exquisiteness of French culinary excellence. From the company’s Charleston headquarters, Christopher creates exquisite dark, white and milk chocolate ganaches and truffles, as well as chocolate sculptures in as little as three weeks, in case you want to completely claim the title of “Greatest House Party Host Ever.” The ganaches range from Gianduja (warm hazelnut and milk chocolate) to French lavender, caramel and dark chocolate, and even on to true foodie flavors like European bleu cheese on dark chocolate. 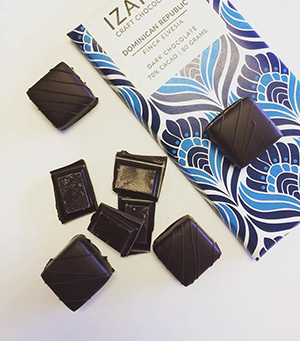 Izard in Little Rock, Arkansas
As the first ever chocolate making company in Little Rock, Arkansas, Izard was born in 2014 and has been winning fans who’ve been around considerably longer ever since. Though the sun-dried cacao used in it products is flown in from around the world, Izard uses local ingredients whenever possible to make chocolate dipped caramels (a favorite in the hometown), 70% dark chocolate bars made savory with Icelandic sea salt, and more. For those unable to choose a favorite, go with the variety pack, which gives you two flavored bars and two single-origin bars — Dominican Republic and Guatemalan — whose ingredients are purchased above Fair Trade standards.

Maggie Louise Confections in Austin, Texas
Started by a truly overachieving lady who received an undergraduate degree from Virginia Tech and a JD from Harvard Law before ditching her career to attend Le Cordon Bleu to learn chocolate arts, these premium Venezuelan El Rey chocolates combine artistic design and “nostalgic flavor favorites” sweet enough to bring back childhood memories, while at the same time decadent enough for adults. Try the rich chocolate caramel, the chocolate nougat confection, or your choice of ganache: dark chocolate coffee, vanilla bean or malted milk. You won’t miss school either.

Castronovo in Stuart, Florida
Winner of dozens of international awards for its chocolate, Castronovo knows you’re sick of chocolate with a “taste [that] has been engineered out of the bar.” It pushes back with bars made from rare cacao found in Colombia’s Sierra Nevada, dark Dominican Republic milk chocolate, and bourbon caramel pralines made by boiling together each ingredient to avoid an overpowering flavor of alcohol. 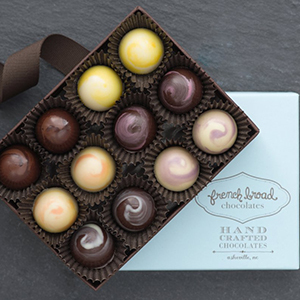 Similar to the story of Xocolatl, French Broad was founded by Dan and Jael Rattigan, a couple who dropped everything, drove to Costa Rica, had a child and began turning cacao into fine chocolate. They even opened a café and dessert shop called Bread & Chocolate below their apartment, but they ultimately landed back in the States to share their learnings with those of us who stayed behind, starting with their North Carolina neighbors. They now have a chocolate factory and tasting room in the mountains of Asheville, where they perform the full process on imported cacao from small farms, creating flavors from which dreams and deliciousness are made. The chocolate bars sell out quickly, but you’ll have less trouble purchasing chocolate collections like the “Asheville Grown” pack of truffles, made from locally farmed fruit and other produce, which includes Strawberry Balsamic, Sorghum Caramel and Fresh Raspberry.

You can't go wrong with these Southern desserts

You can't go wrong with these Southern desserts