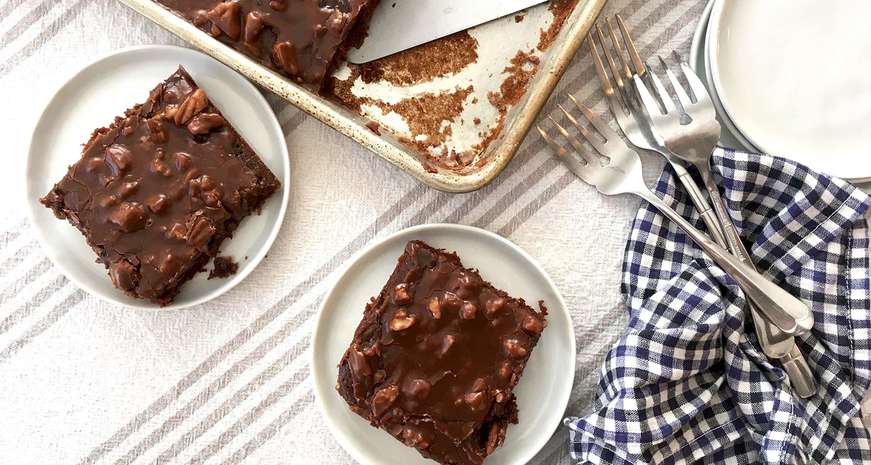 Bathed in a shiny chocolate and pecan icing and spanning an entire baking sheet, a proper Texas sheet cake is a sight to behold. Volume-wise, this cinnamon-laced chocolate cake isn't actually any bigger than your standard chocolate cake, but it'll make up for that in visible square footage — and its icing to cake ratio. This is a cake for serious icing lovers.

In the cookbook, "From Tea Cakes to Tamales: Third Generation Texas Recipes," author Nola McKey writes that, while there are many references to "Texas sheet cake" in books published throughout the country, "there's no evidence that this dessert originated in the Lone Star State. It's popular throughout the United States." It is, after all, essentially a one-bowl chocolate cake, baked up quickly in its distinctive thin shape. (You can throw together a Texas sheet cake in almost minutes and it'll even cool quickly enough to serve within a couple of hours of a craving.) 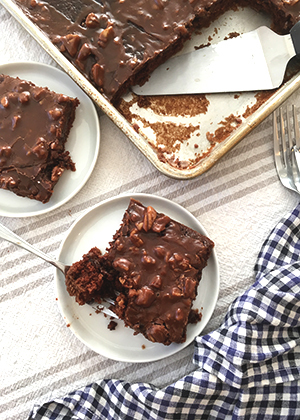 So what makes it a "Texas" cake? Besides being beloved by Texans, some claim its name comes from its sheer size, as everything is bigger in Texas. Others say the pecans in the icing help stake its claim as a Lone Star dessert. Writes McKey: "And then there's the 'sheath' vs. 'sheet' issue — is 'sheath cake' a common mispronunciation, or did the term derive from the way the frosting 'sheathes' the warm cake as it's poured on top? No matter how you describe this cake, Texans are happy to claim it as their own."

One such Texan was Bessie Hackey Shanafelt, a Texas native who lived Jones, Haskell, Hardeman and Guadalupe counties from 1902 to 1976. Shanafelt is featured in McKey's book, along with 76 other of what McKey calls "ancestor cooks." These men and women are the originators of heirloom recipes from across the state of Texas, and these dishes, and the stories about them, make up the entirety of "Tea Cakes to Tamales." They offer snapshots of the diverse communities throughout the state over the course of time.

Indeed, one only needs to casually flip through the book to see that the food of Texas is about far more than sheet cakes. The ancestor cooks have heritage in Norway, Italy, the Czech Republic, China, and, of course, Mexico and West Africa. It makes for a colorful book, one that is just as much a joy to read as it is to cook from.

The children and grandchildren of the ancestor cooks are allowed to tell the stories around the recipes, and they add both context and some modern updates to the dishes. Kathleen Shanafelt Martin, granddaughter of Bessie Shanafelt, wrote: 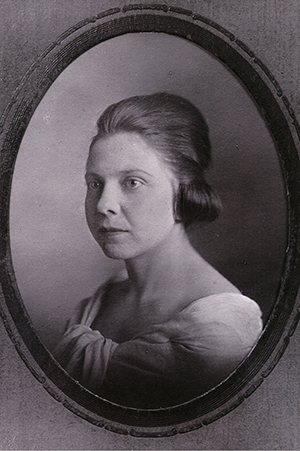 "Nana could really stretch a dollar and make the food she cooked go a long way. ... She'd take leftover pie-crust dough, spread it with butter, sprinkle it with sugar and cinnamon, and then roll it up and cut it into slices, which she'd bake in the oven until it was crispy. Yum ... so good. She would also fry baloney and use that as a main course. ... But nobody at her house was ever hungry! She always had dishes with little dabs of leftovers in the fridge and a half-piece of leftover bacon on top of the stove. Nana never wasted anything.

"She was an amazing cook. My sisters remember her making homemade egg noddles and laying them over the backs of kitchen chairs to dry. She'd use these to make a big pot of chicken and noodles. And she would always serve this yummy, rich chocolate cake when all of the family came to visit her. The Martin family loves it, too. We're all chocoholics!"

You'll find the recipe for the Shanafelt sheet cake below, illustrated in watercolor by Cora McKown, who added these unique images to McKey's book. The next time I make it, I'll add a bit of salt to both the cake and the icing, and, if I remember, I'll toast the pecans in the heating oven before adding them to the icing. Otherwise, the recipe is perfect as written and passed down from generations of Texans to my kitchen. 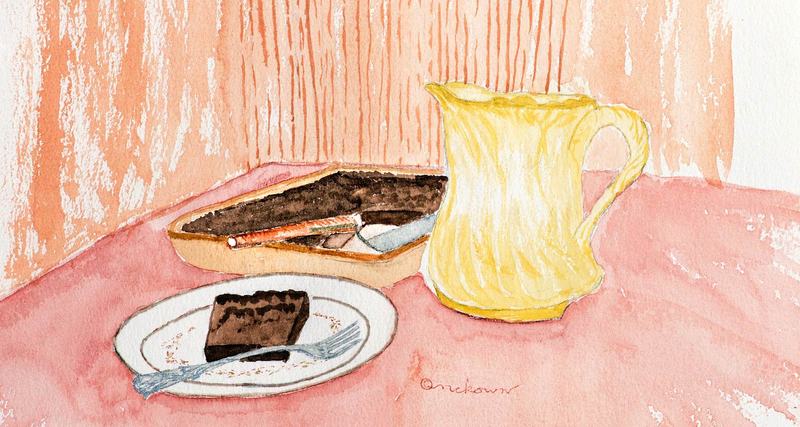 Chocolate-Cinnamon Cake
A prime example of a Texas sheet cake, this recipe is easy to make and serves a large group. For the best results, make the icing during the last few minutes that the cake is baking and be ready to pour it onto the cake as soon as it comes out of the oven. This allows the icing to soak into the cake, resulting in a moist, fudgy texture. This recipe was reprinted with permission from "From Tea Cakes to Tamales: Third-Generation Texas Recipes" by Nola McKey. (Texas A&M Press, 2016).

Instructions
To make the cake: Heat oven to 350 degrees. Grease and flour a 12- by 18-inch jelly roll or sheet pan.

In a large bowl, sift together the flour, sugar, baking soda and cinnamon.

In a medium saucepan, combine the water, butter and cocoa and bring to a boil over medium-high heat. Pour into the bowl with the flour mixture and stir until smooth. Add the buttermilk, eggs and vanilla and mix well. Pour the batter into the prepared pan and bake until a toothpick inserted in the center comes out clean, 20 to 25 minutes.

A few minutes before the cake is finished baking, make the icing: In a large saucepan, combine the butter, cocoa and milk. Bring to a boil over medium-high heat, then remove from the heat. Stir in the powdered sugar and pecans and beat well.

As soon as the cake comes out of the oven, pour the hot frosting over the cake and spread to the edges. Let the cake cool completely in the pan before serving.

Flavor as big as the Lone Star State

What makes chicken-fried steak so special?

Flavor as big as the Lone Star State

What makes chicken-fried steak so special?