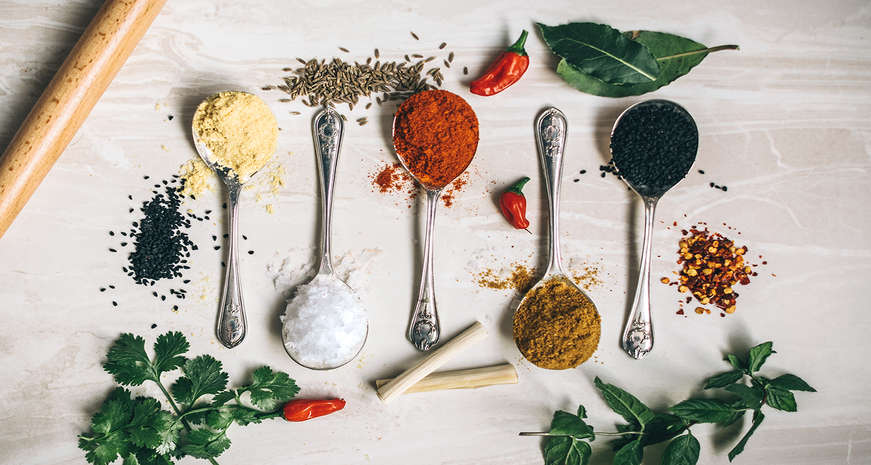 Ten essential spices every Southerner needs to have in their pantry

Without spices, Southern food would not have the big bold flavor profiles that make it great. The complexity that spices can add to a sauce, rub or seasoning can completely transform and elevate a dish.

Some Southern chefs use spices to add some heat to their gumbo or hot fried chicken, while others use it to add a hint of bitterness to a dish. Whatever your preference, these ten essential spices should always been in your pantry.

Black pepper
Distinct tiny specks of black pepper can be found in everything from the breading of fried chicken to the final touch on a bowl of pasta. It always adds a little something extra. Yet while Southern Kitchen chef Jeffrey Gardner thinks black pepper is an essential Southern spice, he also thinks we overuse it. “The two best uses, in my opinion, are a heavy salt and black pepper rub on a Texas-style BBQ brisket,” he said. “And as the dominant flavor in sawmill gravy.” He cautions cooks to avoid using too much black pepper on seafood, vegetables and other food with subtle flavors.

Paprika
The distinct red color of paprika comes from the dried red fruit of the plant capsicum annuum, or as we commonly know it, bell pepper. It can be found in gumbo, spice rubs, chilis and stews. “It’s delicious in a rub for BBQ ribs and pork shoulder,” Gardner said.

Cayenne
As Gardner puts it, “It’s hard to do much Cajun cooking without" this spice. Cayenne is the base of most Cajun spice blends and can be found in dishes like jambalaya, gumbo, and red beans and rice. Two other classic Southern dishes, deviled eggs and ham, wouldn’t be "deviled" without cayenne. “The term ‘deviled’ refers to spice, so you can't make those two classics without a little cayenne,” Gardner said.

Cayenne can be found in powder form or as a whole pepper, so confirm what your recipe calls for before adding into a dish. The spice is also a little deceptive, which means you'll want to be careful with how much of it you add into a dish. “It’s always hotter than you think,” Gardner said.

Celery seed
Celery seed doesn’t have a spicy flavor profile like cayenne, but it does have a recognizable flavor when it’s added to a dish. Serious Eats explained: “Many spices taste like complex blends of flavors, especially when used in combination. Celery seed, on the other hand, tastes exactly like celery…. Grassy, a little sweet and slightly bitter.” Celery seed “adds bitterness and can really poke its head through in rich foods,” Gardner said. The Southern Kitchen team recently did a taste test of fast food fried chicken and celery seed was a dominant flavor in Publix’s fried chicken. Gardner also notes celery seed is one of the key flavors in Mississippi comeback sauce. And no bloody mary is complete without it.

Cumin
Cumin has nutty, earthy and piquant taste that can be both bitter and warm. “It adds smokiness to dishes,” Gardner explained. “And it's what gives chili and ‘taco seasoning’ their distinct flavors.” You'd better have cumin in your pantry if you’re planning on any kind of southwestern or Mexican food. Cumin also pairs well with coriander in spice rubs for poultry or lamb.

Coriander
Coriander seeds (a.k.a. cilantro seeds) have a slight, almost lemony quality to them. This flavor profile pairs well with fish and chicken dishes, and can add amazing depth to braised meats. Whole coriander seeds are also an important part of pickling spices giving pickles a bright flavor. Gardner recommends incorporating coriander into any dish where leaf cilantro is present.

Nutmeg
Nutmeg is the nutty warming flavor that you’ll find in spice cake, candied pecans and apple pie. While its primary use is as a baking spice, it can have a wonderful impact on savory dishes. “Many dishes that call for a heavy cream sauce will use a pinch of nutmeg to help cut through some of the richness — think a pinch of nutmeg inside fettuccine Alfredo,” Gardner said. “I feel like it's a bit more pungent than cinnamon, but the two are often used together.”

Cinnamon
Cinnamon is another warm spice we love to incorporate in classic dishes like apple pie, rice pudding, French toast, bread pudding and, of course, cinnamon rolls. Ground cinnamon can, of course, also be used in savory dishes, such as braised lamb or Moroccan couscous. “For maximum flavor, find Mexican cinnamon (canela), which is the real deal,” Gardner said. "What we think of as cinnamon in the U.S. is actually cassia bark. ... Canela, a.k.a. Ceylon cinnamon, is milder, less spicy, and sweeter.”

Curry powder
Curry powder is a spice blend — not one specific spice. It’s commonly comprised of turmeric, cumin seeds, black peppercorn and ground coriander, but depending on where you buy it, the spices can vary. “It adds great depth to stews and vegetables, and can commonly be found in many Low Country dishes — from Savannah up through Charleston,” Gardner said. “There is a classic Southern dish called Country Captain that involves a tomato-curry broth.” To give chicken salad a face lift, Gardner recommends adding curry powder to the mayonnaise in any recipe. He also suggests steeping the spice blend in a bit of white wine or lemon juice to remove some of its grittiness.

Dry mustard
This is also great used as a part of a signature spice blend, but can be used to make homemade mustard. “I love using it alongside cheese, especially cheddar, so there is always a pinch of dry mustard inside the sauce of my mac and cheese,” Gardner said.

One last housekeeping tip: Spices lose their flavor after six months, so make sure to clean out your spice rack so you get the full flavor of each spice when you add it to a dish. Now get cooking!