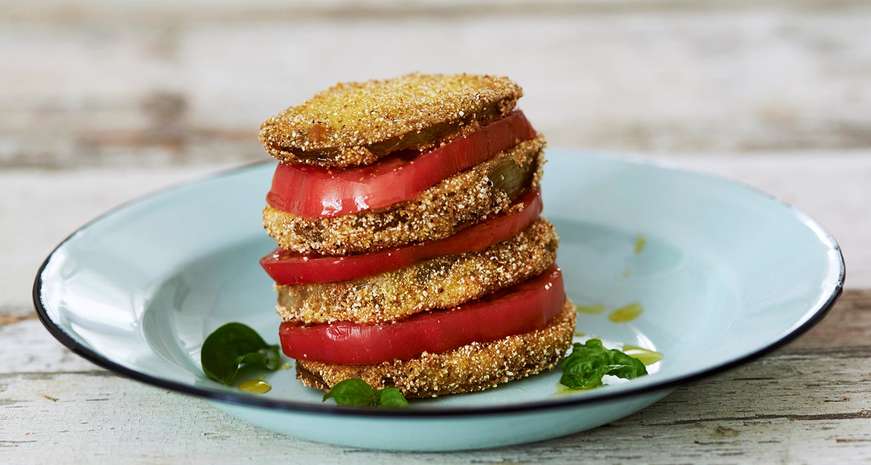 Taste of a Place: Why Southerners love our green tomatoes

Green tomato season has begun; now we've got to figure out how to use them. In this edition of Anne Byrn's Taste of a Place column, she offers history, a recipe and even a little Hollywood nostalgia for every Southerner's favorite fried fruit.

It's not a Southern thing. Gardeners everywhere experience it. In fact, when I was in Italy a few years back, I had the most wonderful and colorful salad. It was a array of chopped green, yellow, and red tomatoes, drizzled with good olive oil and sprinkled with salt.

These weren't Green Zebra or any of those sweet tomatoes that are ripe when green. These were unripe, tart, hard green tomatoes. Conventional wisdom would tell you not to cut up those tomatoes and place them on a salad. But somehow those puckery-green tomatoes worked beautifully alongside the sweet ripe ones. 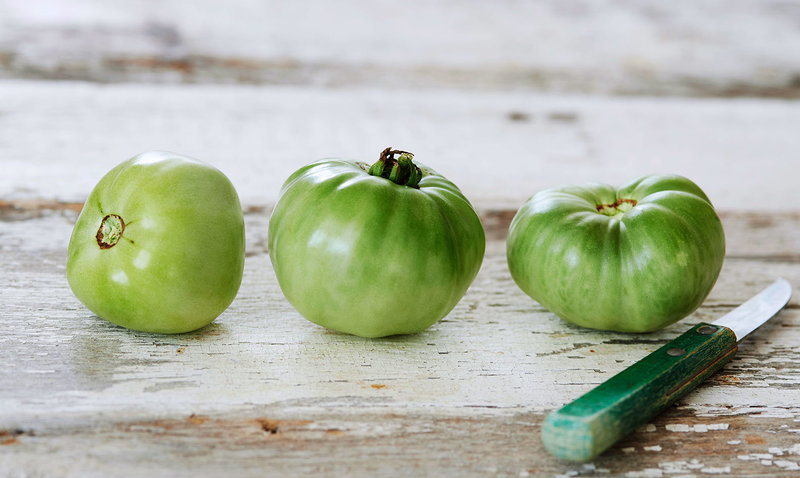 When I interviewed Beth Campbell of rural Wisconsin for my book American Cake, she flashbacked to her young years on a farm, where green tomato season was the family's call to action. Theirs was a working farm and all hands were needed downstairs in the cellar to grind tomatoes for mincemeat.

Campbell's family has a long history in Belleville, located about 20 miles south of Madison, Wisconsin. The town was settled by her family, who came from Switzerland and established the Swiss Reformed Church there. Her grandfather was a farmer who had 12 farms and four children. Campbell was the oldest of six children, and she says big families mean plenty of people to feed. Thus, nothing was ever wasted.

As she remembers, down in the basement with the wood stove and root cellar, there was a long wooden table with a hand-grinder attached to it.

"My job was to grind the green tomatoes so my mom, aunts and Grandma could make that mincemeat," Campbell said, which her family added to cakes and pies all year. "I remember the smell of the mincemeat filling cooking down, ready to be put into jars for processing. And the whole house [was] filled with the wonderful smells of the end of growing season, with winter not being too far away."

Look through pickle and chutney recipes and you'll find green tomatoes. I just made four jars of a green tomato and apple chutney to save for fall's roasted pork and lamb dinners and possibly Thanksgiving's turkey, if it lasts that long. And when I serve that chutney, stored now in my fridge, I'll think back on September and green tomatoes languishing on the vine. 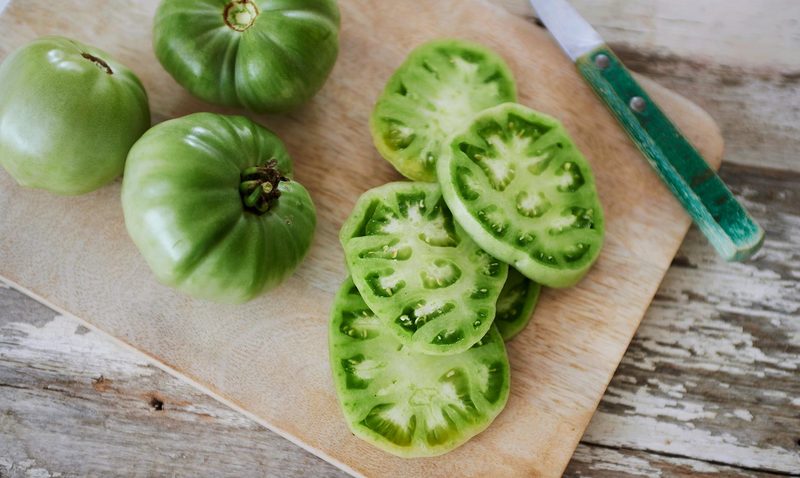 Why Tomatoes Stay Green
The tomato seems a perfectly simple food. And yet, to turn from green to red in color, the tomato needs pigments.

One is chlorophyll, which turns it green. Once the height of the tomato season arrives, chlorophyll dissolves and the pigments lycopene and carotene kick in to turn the tomatoes red. The tomato not only changes color, it gets sweeter and softer, ready for slicing.

But as the plant matures, and garden days and nights get cooler, green tomatoes won't turn red on the vine. Which isn't a problem if you put them in the kitchen window to ripen over a week or two, or if you just like to cook with green tomatoes.

One of my favorite gardening books, The Gardener's Wise Words and Country Ways, by England's Ruth Binney, advises gardeners to hold on to unripe green tomatoes at the end of the season. She chops and adds them to stir-fries, or she wraps them individually in tissue paper, and places them in a drawer or cardboard box with a few ripe tomatoes or a couple of bananas. The natural ethylene gas in ripe tomatoes or bananas jumpstarts the ripening process.

I never have to take such extreme measures to get my green tomatoes to ripen. I just place them in a sunny kitchen window and don't give them a lot of thought until they ripen in about a week. They are so much better than supermarket tomatoes and yes, they have a bit of a tough peel, but slice that off and cut the now-ripened tomato into pieces and place them atop a salad. They are also incredibly delicious on a bacon sandwich.

Or you can cook with green tomatoes and skip the ripening altogether!

Fried Green Tomatoes
Green tomatoes seem Southern, but as I mentioned, the phenomenon happens anywhere tomatoes are grown. The association probably comes from the fact that green tomatoes are most often fried, and as we know, Southerners have deft hands when it comes to that particular cooking method.

When I see green tomatoes, I am reminded about the fried green tomatoes cooked at Lovejoy, the farm owned by the late Betty Talmadge, located about 25 miles south of Atlanta. In the 1980s, Talmadge would stage lavish, Southern-themed dinner parties for friends and clients. And thanks to her cook, a lady named Cile, she always had the best fried chicken and fried green tomatoes by the bucketful.

I once walked back into the insanely busy kitchen, in the middle of one of these parties. And there was Cile, pulling sliced green tomatoes from their bath of salted ice water. She would dredge them in a mixture of seasoned white cornmeal and flour, and then fry them until crispy.

Her trick was to place the fried tomatoes in a colander, to let them drain along the sides. This is how she was able to fry them for a crowd, and still keep them delicious and crispy. 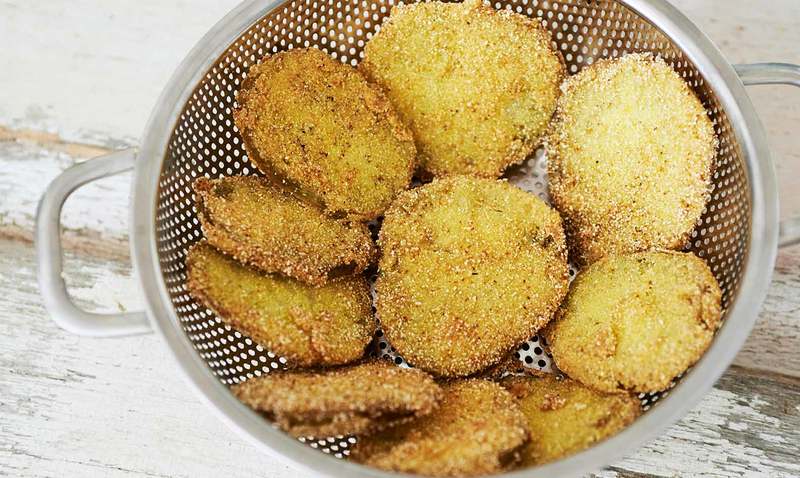 Nathalie Dupree, the doyen of Southern cooking who now lives in Charleston, remembers fried green tomatoes being served with gravy alongside chicken-fried steak. She thinks of them as a food of fall, and she says they are best when fried and eaten "right out of the pan."

Dupree likes a combination of cornmeal and flour on a pie plate for dredging, and she likes to sauté the coated tomato slices in butter. "I like the crisp edginess," that butter gives to the frying, she added. And as for draining those fried green tomatoes in a colander? Well, the colander has long been used to drain fried chicken and tomatoes. It was "an excellent rural solution for all fried foods," Dupree stated.

Up until the movie Fried Green Tomatoes was released in 1991, fried green tomatoes were a vegetable side most often prepared at home. But that movie, based on Fannie Flagg's novel Fried Green Tomatoes at the Whistle Stop Cafe, put them on the map. Set in rural Alabama, and based on the author's aunt's cafe in Irondale, Alabama, the movie depicted fried green tomatoes, chicken, sweet potato pies and you name it, cooked up daily at the cafe. And on a deeper level, it was a movie about women, friendship, resiliency, and food.

When the movie was filmed, in the heat of the summer in Juliette, Georgia, Atlanta food stylist Cynthia Hizer was called into action to fry the tomatoes and style all the other food required for the movie. I tracked down Hizer, all these years later, to see what she remembered about frying so many green tomatoes for the set.

It was a laborious process, she recalled. On set, the fried tomatoes appeared gray, so Hizer and her assistants had to first soak them in green-tinted water to brighten up their color. And then they dredged them in a mixture of flour, sugar and cornmeal, froze the slices, dredged them again, then fried them in a big cast iron skillet until golden. She recalls frying them only on one side and placing them on the platter (fried-side up). This way they stayed firmer longer while filming. 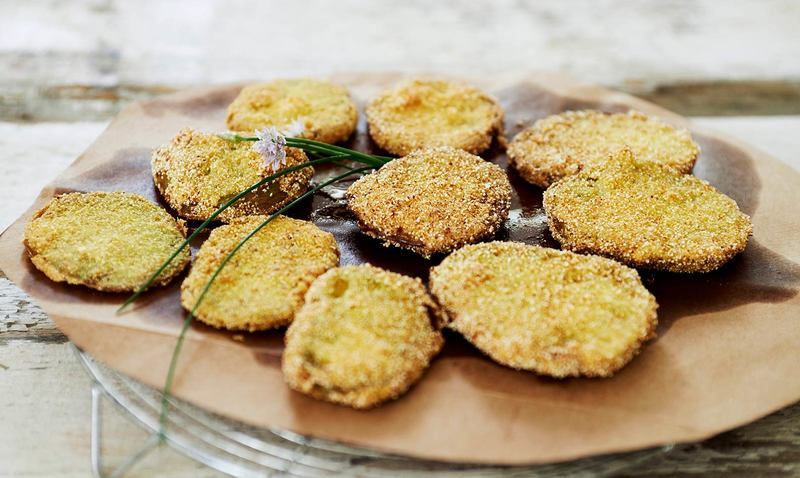 In terms of how to best prep tomato slices for frying, recipes differ. Dupree adds that it's important to choose really green tomatoes, not those that are starting to turn red, which softens their texture. I was taught to soak them overnight or at least for a few hours in the fridge, in salted ice water. Cynthia Hizer says she often uses buttermilk for soaking.

Of course, after frying is done, the options are up to you. The recipe I share is a hybrid of recipes I have tried through the years.

You can serve yours with a sprinkle of salt and pepper, shower them with chopped fresh basil or parsley, cut them into cubes and add them to salads like croutons, or stack the fried green tomato slices with ripe red tomato slices. Smear some homemade pesto or soft goat cheese between the slices, and the stack stays together and is delicious.

Or don't fry at all; just chop the tomatoes and make a quick chutney, like the one below based on Kevin West's recipe in his excellent cookbook, Saving the Season. The possibilities are endless.

Green tomatoes may signal the end of the summer garden, but if you use them creatively and instinctively, they signal the beginning of another season of valuable recipes.

Cut the tomatoes into about four nice slices each.

In a large bowl, combine cold tap water with 2 teaspoons salt and a couple of ice cubes. Add the tomato slices and refrigerate for 2 hours or up to overnight.

When ready to fry, drain the tomato slices and pat dry with paper towels.

Place the flour, cornmeal, 1/2 teaspoon salt and a few grindings of pepper in a shallow bowl or pie plate. Stir to combine.

Dredge the tomatoes in the flour mixture, coating well on all sides. Place the tomatoes on a baking sheet and refrigerate or freeze while you heat the oil.

Heat the oven to 200 degrees. Place a colander or wire wrack on a rimmed baking sheet.

In a large cast iron skillet, pour the oil to measure 1 inch up the sides of the pan. Place over medium-high heat and heat the oil to 350 degrees, or until a pinch of cornmeal sizzles when added to the oil.

Remove the tomato slices from the fridge, and carefully drop three or four slices at a time into the hot oil. Fry until golden brown, about 2 minutes per side. Transfer to the prepared colander to drain. Transfer the drained slices to a second baking sheet and keep warm in the oven. Repeat with the remaining tomato slices.

In a colander, combine the tomatoes and the salt. Toss to coat well. Place the colander in the sink and let the tomatoes sit for 1 hour.

Place the pot over high heat and bring to a boil. Reduce the heat to low, cover, and let the mixture simmer until the tomatoes and apples are tender, 35 to 40 minutes. Stir in the raisins and continue to cook, uncovered and stirring occasionally, until the fruit is soft and the cooking juices have reduced and are syrupy, about 30 minutes.

Ladle the hot chutney into four sterilized half-pint jars. Seal the jars and let rest on the counter until cool. Refrigerate for up to 6 weeks.