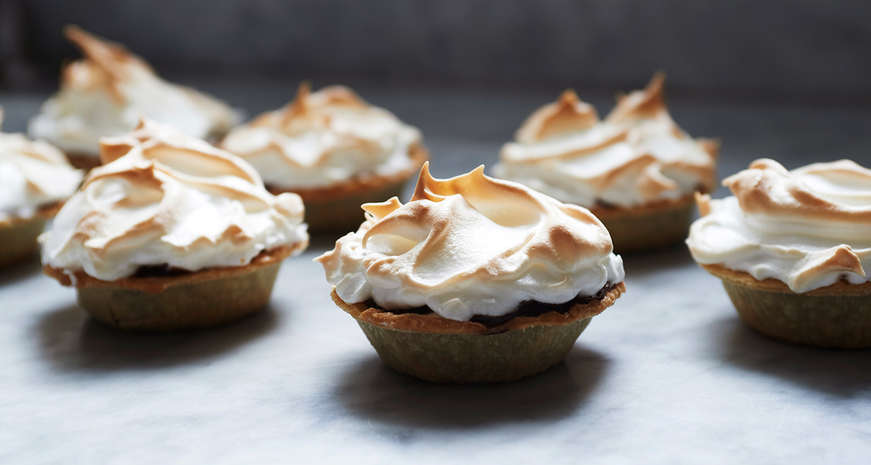 In the latest edition of Anne Byrn's bimonthly column, the bestselling cookbook author explains the story and food science behind meringue pie, and provides a sensational family recipe for chocolate tarts.

The local drugstore used to be where you went to get prescriptions filled, or just to have a quick grilled cheese sandwich, a cup of soup or perhaps a slice of pie. Yes, drug store cafes decades ago knew how to make a soft and memorable meringue pie, from chocolate to banana, coconut to lemon.

At the old Green Hills Drugs in Nashville, my mother had the pies and their days of the week memorized. A chalkboard sign outside the store announced the pie of the day, but my mom already knew when chocolate would be baked. It was her favorite.

I remember asking her once why she liked chocolate meringue pie so much and she looked at me in wonder, like a child might look if asked why you walk barefoot in the rain. "It's just good," was her quick reply. And that was enough of an answer for me. 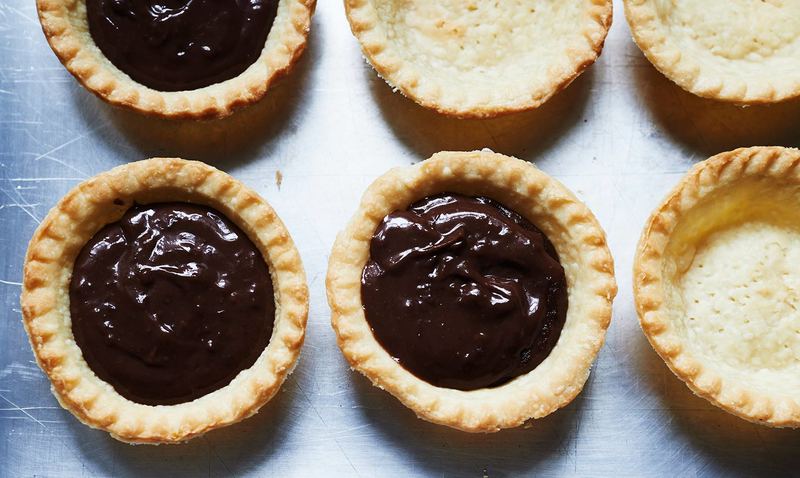 In our home kitchen, my mom could duplicate just about any pie on the drug store menu. More often than not, that pie was chocolate. When she was in a hurry, she'd start with a box of chocolate pudding mix and "doctor" it up with butter, semisweet chocolate chips and a dash of vanilla. She always made her pie crust from scratch. And the meringue? It was second-nature.

The egg whites left from using the yolks in the filling were beaten on high with sugar until stiff peaks formed and then she carefully but deliberately spread them atop the warm filling, all the way to the crust, to create what she called "the seal." If the egg whites met the crust, they binded, and the meringue would not shrink back from the crust when it cooled. For pie aficionados like my mother, this was crucial.

Understanding homemade meringue
Meringue is one of the world's oldest toppings to pies and cakes. With just two ingredients - egg whites and sugar -- and often a little acidic cream of tartar to ensure a good rise from the beaten egg whites -- people of all backgrounds, means, and locales could whip it up.

The history of meringue is said to date back to the early 1700s and a Swiss pastry chef named Gasparini. However, I am a bit skeptical of this story, because "Gasparini" sounds Italian to me. My bet is that French, Italian, and Swiss pastry chefs were all making meringue, and this technique was brought to America by European pastry chefs who worked in hotels and restaurants here.

One of the most famous examples of meringue in America is Baked Alaska, born in 1867 at Delmonico's restaurant in New York City. French pastry chef Charles Ranhofer created the meringue, ice cream, and cake confection as a way to commemorate the U.S. purchase of Alaska, and he originally called the dessert by its classic French name: "omelette a la Norvegienne."

Ranhofer's meringue was an Italian meringue, in which a sugar syrup is poured into a bowl of egg whites while they are beaten. What results is a stable meringue that creates big peaks and a whole lot of drama once that pie is placed back in the oven to brown. 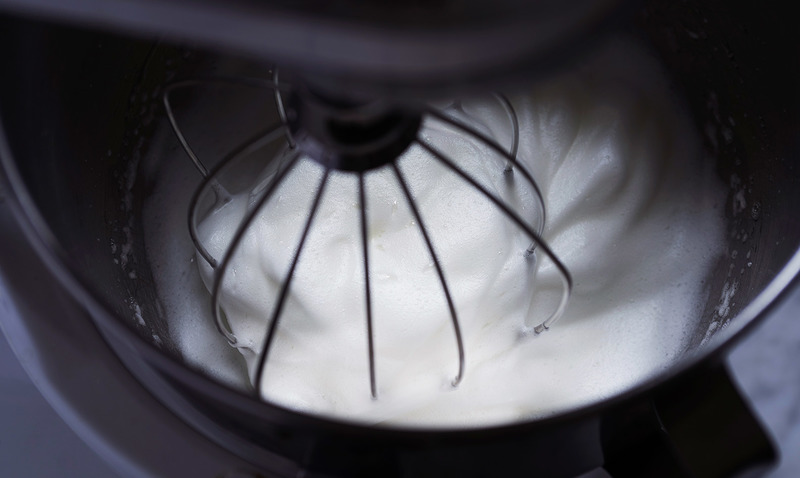 In the school of pastry, there are meringue differences. Atlanta food chemist Shirley Corriher explains the different types of meringues in her book, "BakeWise." Here is her advice in a nutshell: Hard or French meringue is that meringue that is baked until crunchy. It is often used as a cake layer. Swiss meringue, on the other hand, is prepared by first heating the egg whites and sugar before beating. When baked, this meringue is bright white in color.

But the meringue made most often in the home kitchen is the American soft pie meringue, in which you add about 2 tablespoons sugar to each egg white and beat until stiff peaks form. Once baked, it is soft, just like the filling, yet it doesn't keep as well as the other meringues. It can weep (create liquid between the meringue and the filling) and it beads -- droplets of sugar syrup form on the meringue. But we love it, and for the home cook, soft pie meringue is easy to prepare. Just start with room temperature egg whites; they always beat to a greater volume than eggs straight from the fridge. 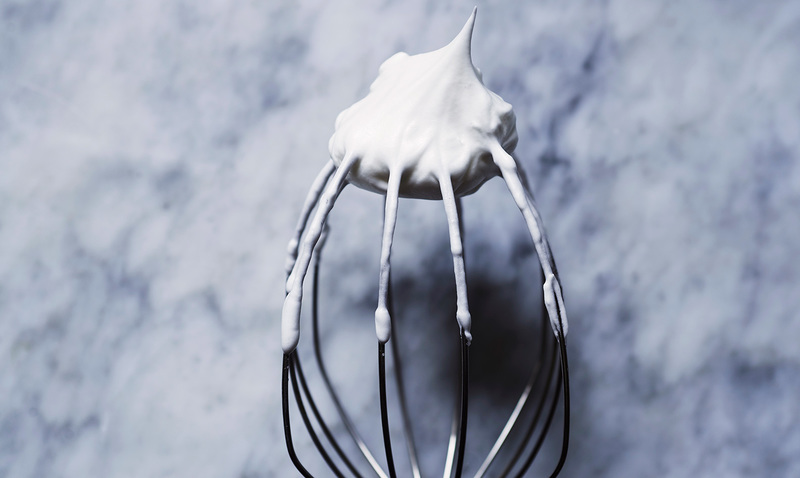 Interestingly, soft homemade meringue uses less sugar than fancy meringues made by pastry chefs. Sugar has often been expensive to the home cook. In 1930s America, when meringue pies were popularized, sugar was costly and time was short. Cooks would forgo frosting a cake and spread on a quick meringue instead.

My meringue pie family reunion
My mother's side of the family staged a reunion in Tennessee last summer. We had cousins from Vermont, Texas and Alaska make the trip, in addition to relatives who lived much closer to home. And my sisters and I hosted an afternoon tea on the first day, serving six recipes: one from my late grandmother Dee and one each from her five daughters.

My mother was the youngest of the five Carr girls. She stayed in Nashville most of her life but her other sisters spread out. Aunt Jane lived in Pennsylvania, Aunt Elizabeth resided briefly in Brazil and Aunt Louise lived much of her life in St. Petersburg, Fla. We baked Aunt Jane's favorite coffee cake and our Aunt Mary Jo's no-bake chocolate cookies (because she preferred golf to baking).

We baked my grandmother's cheese date cookies, my mother's chess cake and Aunt Louise's chocolate Bundt cake. But for Aunt Elizabeth, there were many options. Her son Rob, who lives in Hartland, Vermont, said she was known for cookies of all types and chocolate meringue tarts. Rob sent me the recipes. As it turned out, those chocolate tarts seemed too laborious to serve to 65 people on a hot July afternoon. We opted for the crescent cookies.

But I wonder now if I was saving the tart recipe for my own guilty pleasure. That recipe was one I recall my mother making. Chocolate meringue pie was, after all, her favorite dessert. And I wanted to bake those tarts when things quieted down.

Baking Homemade Chocolate Tarts
There is something magical about a tart or a cupcake when you are a child. You hold it in your hand, and it is all yours. Perhaps that's why recipes like this create memories.

Cousin Rob remembers both his mother and his housekeeper Annie Lou baking these tarts when he was a boy. Rob calls Annie Lou his "surrogate mother," because he spent so much time with her in the kitchen.

I baked Annie Lou's recipe and it took me back to the days when my mother made chocolate meringue pie. The filling was rich and seriously chocolatey. But the meringue was light on the palate. I loved the resourcefulness of this recipe, using both the egg yolks and whites, and that meringue was easy to pull together. 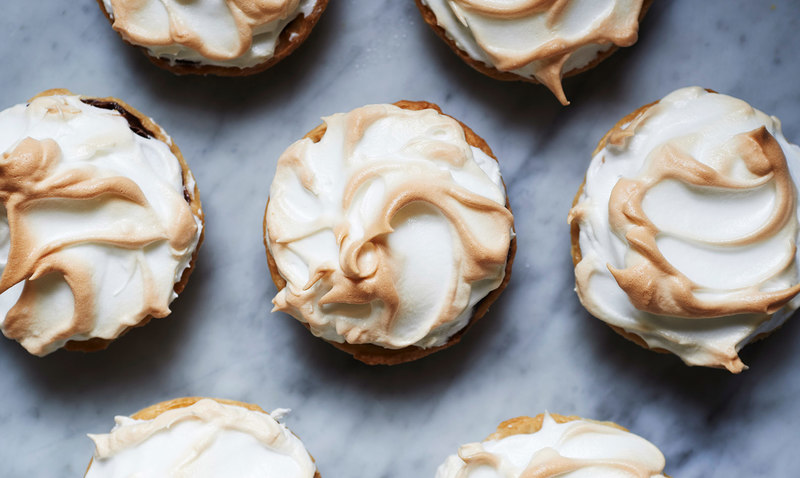 You might amaze yourself when you have made a soft pie meringue, something that, once upon a time, Fannie Farmer and Irma Rombauer would have considered admirable. Everyone else sees these browned, billowy meringue tarts emerge from the oven and is in complete awe. But whether you bake meringue pie as individual tarts or a whole pie, the secret is that while it looks impressive and complicated, it's not.

The taste will take you back to childhood, and create new memories for your children and grandchildren. I know you will love this recipe!

One small apology: This recipe makes 10 to 12, which isn't ideal, because frozen tart shells are now sold in boxes of eight. (Save those leftover shells and make quiche or little pecan pies later.) As I earlier mentioned, you can also bake this as a 9-inch pie, baking 15 minutes or so to brown the meringue. Enjoy!

Instructions
Place a rack in the center of the oven and heat to 425 degrees.

Place the frozen tart shells in their aluminum pans on a baking pan. Prick the shells with a fork a few times on the bottom and sides. Bake until the shells are golden brown, 8 to 10 minutes. Let cool completely before removing the shells from their pans. (If using a 9-inch pie shell, follow package directions for baking.) Reduce the oven temperature to 350 degrees.

For the filling, whisk together 1 cup of the sugar with the flour and salt in a small bowl.

In a medium saucepan, heat the milk over medium heat until it just begins to steam, about 2 minutes. Remove from the heat and stir in the chocolate until it melts. While whisking constantly, gradually pour the sugar mixture into the chocolate mixture until smooth. Place the pan back over medium heat and cook, whisking constantly, until the mixture has thickened, about 2 minutes. Remove from the heat.

In a medium bowl, whisk together the egg yolks. While whisking constantly, pour a generous tablespoon of the hot chocolate mixture into the yolks. Whisk the egg yolk mixture into the remaining hot chocolate mixture until smooth. Place the pan over low heat and cook, whisking constantly, until thick and smooth, about 2 minutes. Remove from the heat and stir in the butter and vanilla.

Meanwhile, prepare the meringue: In a large bowl, beat the egg whites and cream of tartar with an electric mixer on high speed until soft peaks form, about 2 minutes. While the mixer is running, pour in the remaining 6 tablespoons sugar, and continue beating on high until stiff peaks form, 1 to 2 minutes.

Ladle the chocolate filling into the cooled tart shells and cover with meringue. Make sure the meringue meets the pie crust to completely cover the filling. Bake until the meringue is golden brown, 10 to 12 minutes.

Let the tarts cool for at least 15 minutes. When cool enough to handle, lift the tarts out of their aluminum pans, and place on a rack to cool completely. Serve.

See the recipe in our recipe database