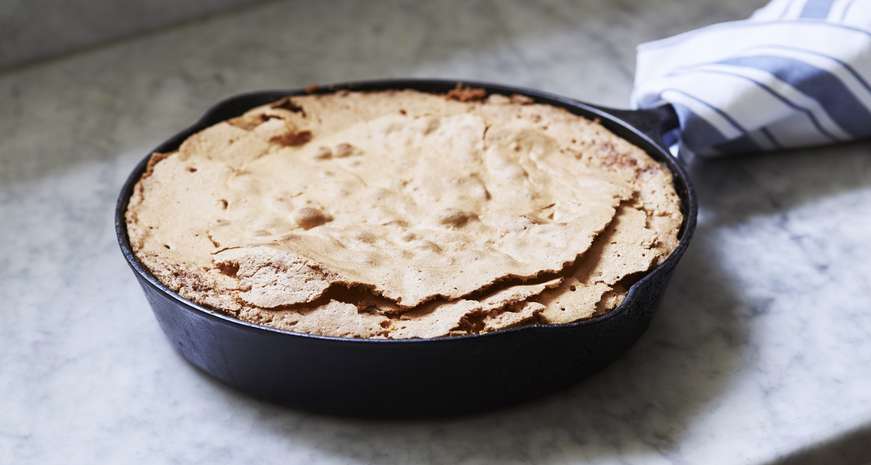 In this edition of Anne Byrn's Taste of a Place column, the bestselling author and former Atlanta Journal-Constitution food editor explores the history of cake pans and wonders if baking pound cake in a cast iron skillet will make for an even more delicious dessert. The results — and a recipe — will get you running to the kitchen.

My father used to hope my mother would bake a pound cake so he could toast a slice for breakfast the next day. It wasn't exactly a nutritious power bar, but with a crispy crust working in concert with a soft, creamy interior it was a completely wonderful gastronomic experience. I wondered if you could bake such a pound cake that tasted just like it had been toasted, right out of the oven.

So I put on my baking cap. What pan could bake a cake with this sort of decadent, crusty nostalgia? What pan might have baked the first American pound cake? And then I spied my old friend, a black 12-inch cast iron skillet that has been with me through all the travels of my life. It was there when I restored an old house in East Atlanta. It was there when I moved to a newer, smaller place in Peachtree Hills, and it was packed, carefully, in a crate and shipped to England when I left my food editing job at the Atlanta Journal-Constitution and married an old sweetheart in England. Then it was packed up again and shipped to Nashville, where we now live.

That pan, like its owner, has been well seasoned with life. It has fried pounds of bacon for school morning breakfasts, creamed fresh corn in the summertime and has been the vehicle for crispy cornbread with homemade chili when the weather cools. I wondered if it might like to be the vehicle for pound cake. Would the cake bake through and not stick to the sides of the pan? Would this be a success?

Well, enough thinking about it, I figured; let's just do it. Our ancestors did it. Why can't we? 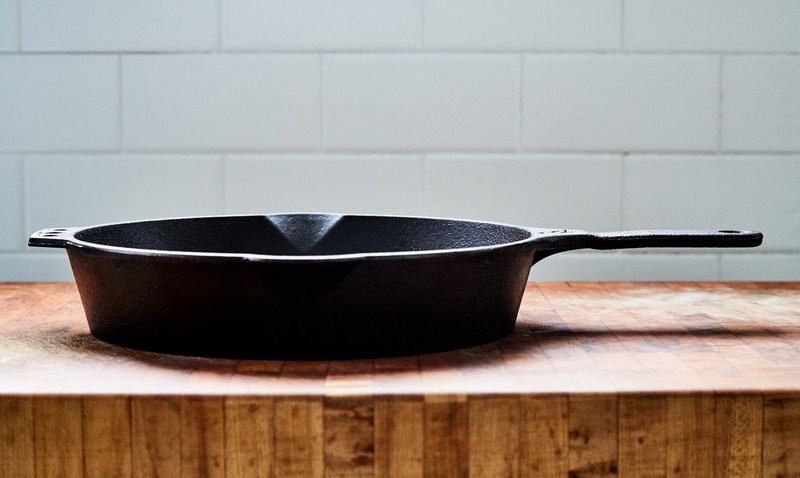 Baking cake in cast iron is not new
Writing my recent book, "American Cake", I got a sense of how old cakes looked and tasted. They were smaller than the layered cakes we bake for birthdays today. Sugar was at a premium. There were no KitchenAids. And frosting? Meh! Until the seven-minute icing extravaganzas of the early 1900s, Americans didn't really frost their cakes. That would come later, once Domino, Dixie Crystals and all the other sugar brands (both national and local to the South) introduced boxed powdered sugar and brought ease to making buttercream frosting.

And think of how hot it must have been in those pre-air conditioned kitchens, hand-beating butter and sugar, then adding eggs one by one and folding in a pound of flour. When Mary Randolph wrote "The Virginia Housewife" in 1824, she had to first wash salt from the butter and then beat it with a wooden pallet until "it is soft as cream." This is how the verb "cream" the butter and sugar made its way into our recipe lexicon. Let's just say cake-baking was a full day's work.

Pound cake has become much easier to make with the invention of stand mixers. Not for a minute will I get so nostalgic that I want to beat my pound cakes by hand.

In the old days, the type of pan you used to bake a cake had a lot to do with your oven. When I dove into old recipes in my "American Cake" research, I found they called for just an "oven" when recipes were not baked on the hearth. The size of the cake pan matched the size of the oven. Loaves fit into small ovens. Tube pans were advertised in the early 1800s — mostly to bake angel food cakes — and Bundt pans didn't exist in America until the 1950s. But the cast iron skillet and Dutch oven, on the other hand, have been around since Americans headed west.

Cast iron pans were just what you needed to bake and cook over hot coals and in wood-fired ovens. When the residual heat from burning wood was gone, the heat was gone in the oven and your window for baking a cake just closed. But cast iron pans held that heat. They allowed cakes to bake then, and they are making cake baking more interesting now.

I could imagine a pound cake emerging from the oven with a crisp and buttery top, just like pizzas and loaves of bread coming out of a wood-fired oven. And I was curious whether pastry chefs had figured out what I was contemplating, so I emailed my friend Rebekah Turshen, pastry chef at City House in Nashville. Had she ever baked a cake in cast iron? 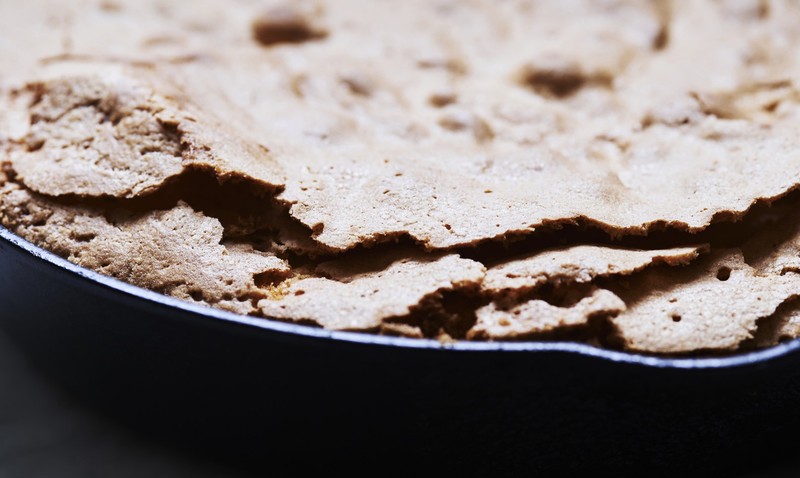 Old things are new in restaurant kitchens
Turshen first baked her sturdy lemon ricotta cake in a springform pan but switched to cast iron a few years ago. Why? The crust. "It adds such a nice crispness," she said.

To prep the pan, Turshen lines the bottom and sides with parchment paper sprayed with vegetable oil. "I wonder if I could skip that step but I haven't wanted to take any chances with making sure they pop out nice," she said. She also noted that Tandy Wilson, City House's chef-founder, doesn't want her to slice cake inside pans because the knife nicks are hard on the cast iron interior.

Turshen also loves baking upside-down cakes in cast iron. "Just make sure not to fill the batter too high," she said.

And in New Orleans, Kelly Fields at Willa Jean bakes all cakes and cobblers in cast iron. "I like texture in everything I do," said Fields. "It creates another level of texture on the outside of the cake. I always take my cast iron pan and preheat it on top of the stove and hit it with oil or butter and get it really hot and pour in the batter. It starts to caramelize. Or I will heat the skillet, add butter in the skillet and sprinkle with raw sugar right before the cake batter is added, so the sugar doesn't have time to melt."

While the pans Fields uses in the restaurant are Lodge foundry-seasoned pans, at home she bakes in her family heirloom pans from South Carolina. Her mother and her grandmother, who was named Willa Jean, were both the source of her baking memories.

With these two talented pastry chefs laying it out so simply and purposefully, I was ready to bake. 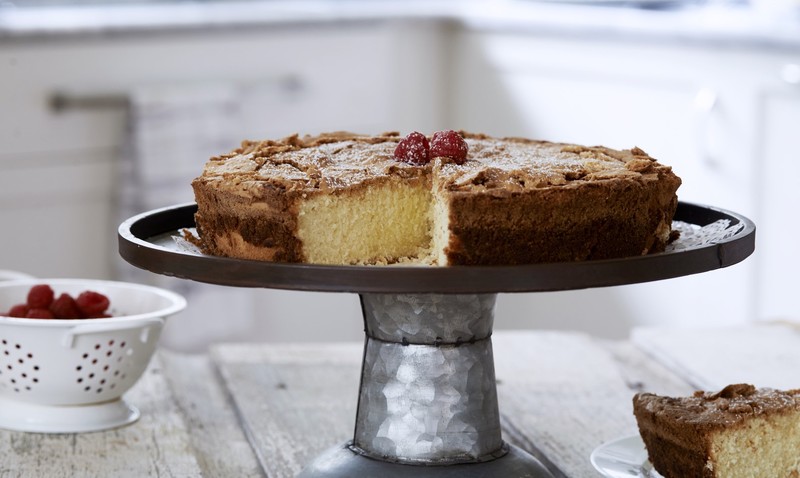 Let's get baking
The pan was waiting, but what recipe to bake?

I chose John Egerton's pound cake, similar to a much-loved newspaper recipe in Atlanta called Merle Ivy's Whipping Cream Pound Cake. It is a pretty basic pound cake recipe, except that it contains a cup of heavy cream. Every time I've baked this cake, people love it and want the recipe, which I know by heart. So I should be able to tell if the cast iron pan makes a difference in the final result.

The late John Egerton grew up in Cadiz, Kentucky (country ham country) and traveled extensively through the South, reporting on people in places preparing real Southern food. He was the author of the cookbook, "Southern Food," but he was also an authority on civil rights and race in the South. And I think if Egerton were still here with us, he would be pleased I was putting his cake to the test.

I baked his recipe just like I would if it was poured into my usual tube-shaped pan. I rubbed the pan with butter first, but I did not flour it. That's the wonderful part of cast iron cake baking — the crust will release itself from the pan as it cools. (OK, you do have to run a knife around the edges first and give it a good firm shake, but it will release.)

Unlike Kelly Fields, I did not heat the pan in the oven or on top of the stove before pouring in the batter. You can do that if you like. I just poured the batter in the buttered pan, placed it in a 325-degree oven, and set my mental timer for about 1 hour. The cake was done in 65 to 70 minutes. If you bake it in a tube pan, it will take 75 to 80 minutes, as that pan is taller. So, cast iron pan cakes bake more quickly, I learned.

The cake rested in the pan overnight, untouched, and it took a lot of willpower not to pinch off the crust. The next morning, I unmolded it onto a stand, sliced into it with wonder and discovered that the heavy pan lent a tender, moist crumb to the cake. And it was beautifully, evenly baked through. Success!

The cake was a tribute to two late Southern gentlemen  — Egerton and my father — who loved pound cake, and two superstar pastry chefs who are helping recreate the way we bake cake. And as I discovered after my first bite, it was more than good when baked in cast iron. It was better.

Get the recipe for cast iron poundcake