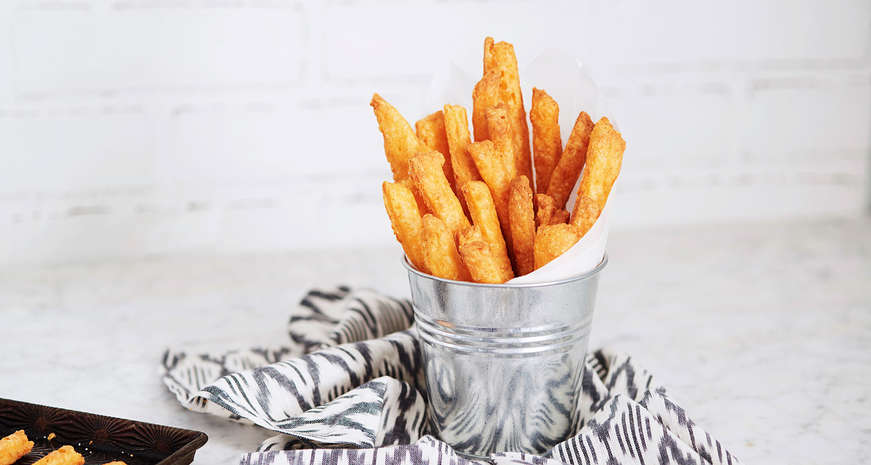 It's that most wonderful time of the year to fret about what to gift, what to wear, what to cook for the folks on your list. But if you are even mildly entertaining the thought of entertaining friends and family, it's time to pull out a cheese straw recipe and get practicing.

Cheese straws — those long, willowy, thin and crispy cheese wafers of the South — are deliciously greasy and shatter when you bite into them. But at the same time, they are proper enough to serve your mom. Whether cut into lengths looking like a straw or sliced into round coins, they are made to be shared.

Southerners have embraced them as long as we can remember at tea-time, cocktail parties and wedding receptions. In fact, North Carolina food writer Kathleen Purvis once wrote that cheese straws are as much a part of weddings as "cheap champagne and dyed satin shoes." She even went so far as to say nuptial bliss depends on cheese straws being served at the reception.

I think of cheese straws when I think bridal showers, silver trays, punch glasses and those green velvet dresses my mother insisted I wear as a child. I also think of cheese straws when I think back to funerals of favorite aunts and grandmothers, as they were among the array of foodstuffs brought to the house in condolence. And I think of them at cocktail parties and holiday gatherings, at Derby parties in May, on anniversaries, at Thanksgiving pre-festivities, Christmas, and New Year's. If you want to entertain in festive Southern style, you only need libation and a good recipe for cheese straws.


Why We Love Cheese Straws 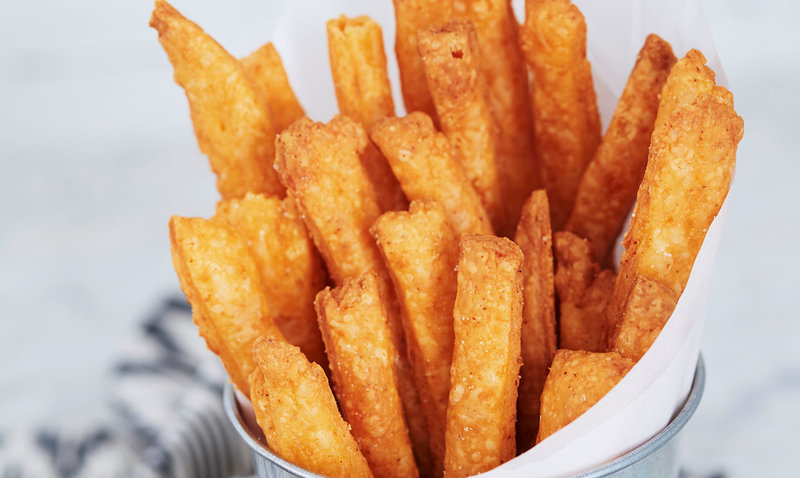 Made of flour, butter, grated cheese and a little cayenne pepper, my basic cheese straw recipe is simple. And therein lies the beauty: You can make them quickly from what's in your kitchen. They are fast and cheap, and if thinking ahead, you can bake them days before the party and stash them in an airtight metal tin or freeze them in a zipper-lock plastic bag. They're forgiving, unassuming, deliciously humble Southern bites.

Or are they truly Southern?

When researching my latest book on all the little sweet bites that made American food so distinctive, I got off-topic reading about cheese straws. An old newspaper search led me to find cheese straw recipes in "Farm and Household" articles in Ohio, Pennsylvania, and New York newspapers of the late 1800s. My Southern cheese straws, it appeared, weren't Southern at all. Fannie Farmer included a recipe in the 1918 edition of her cookbook.

So I dug deeper and read about the scarcity of dairy and cheese in the South after the Civil War. I opened Mrs. Hill's Southern Practical Cookery and Receipt Book, published in 1872 by Annabella P. Hill, of Newnan, Ga. She baked a "cheese biscuit" made of a pound of flour and half a pound each of butter and grated cheese, and served her biscuits with 5 o'clock tea.

It wasn't until I pulled down Bill Neal's Biscuits, Spoonbread & Sweet Potato Pie that I learned my beloved cheese straws were British. They were first baked in England, with parmesan imported from Italy. Neal said Samuel Pepys loved parmesan so much that he buried his wheel before the Great Fire in 1666. And Neal acknowledged the connection with cheese straws and the South: "Cheese straws are made by every good cook throughout the Southern states. They are a staple of the cocktail table, which Southerners, unlike other serious imbibers, pay special attention to, and they are superb morsels to nibble upon with bourbon and sherry.

The early British cookbooks shared cheese biscuit recipes. It began with Mrs. Isabella Beeton in her Book of Household Management, published in 1861, where Mrs. Beeton shared a "Cayenne Cheeses" recipe containing just flour, butter, cheese, cayenne, salt and a little water. The first mention of the term "cheese straw" was in 1874, in the British Young Ladies Journal. And the recipes continued to be published in British cookbooks throughout the 20th century, most recently Arabella Boxer's Book of English Food, published in 1991. The Brits still love their cheese straws.

Here, across the pond, Southerners embraced the cheese straw and held onto the tradition of making them, because we entertain and are accustomed to baking biscuits and quick breads. You might say our food wasn't influenced by Italian and other European cultures that have formed the foodways of the Northeast, for example. Our baking has been largely British, and Southerners adopted British cheese straws and simply improved on them. We incorporated our own "hoop" or "rat" mild cheddar cheese sold at the country store. We used our own local soft-wheat, lower-protein flour, which resulted in a more fragile cheese straw. We presented them on a silver tray. There was fanfare to serving cheese straws, and goodness sakes, Southerners know all about fanfare.

Cheese Straw Construction & Variations
Making cheese straws is a little like making a biscuit. You work the ingredients together but don't overwork them. You can do this by hand, with a food processor or with a sturdy electric stand mixer like a KitchenAid. While Mrs. Beeton added enough water to pull the dough together, today we don't use water. The sharp cheddar cheese we use is more watery than the dry parmesan she used. The heat of the mixing pulls the mixture together into a ball, and if not, we just knead it with our hands a bit and it warms into a ball. Then we press down on the ball, wrap it in waxed paper and place it in the fridge until ready to bake. 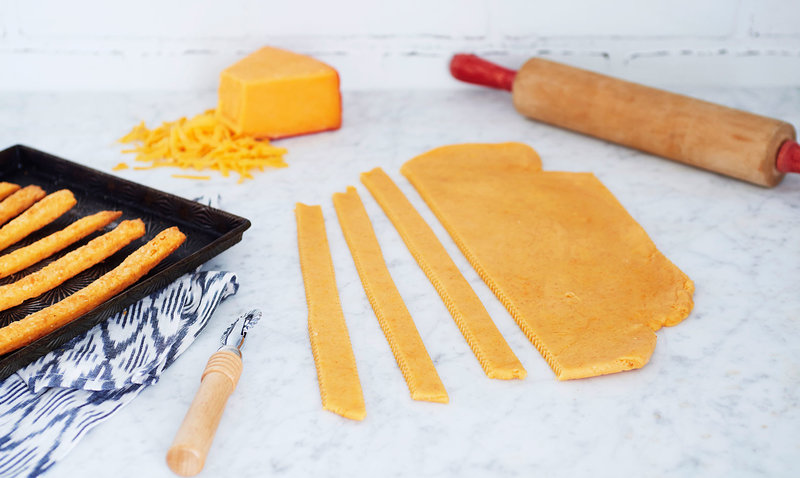 Preheat the oven to 350 degrees, and cut the dough in half. It's easiest to work with one half at a time. Roll the dough out on a lightly floured surface until it is 1/4-inch thick. Using a heavy rolling pin, roll out from the center in one stroke. Don't roll back and forth over the dough or the dough will heat, and will stick to the rolling pin and surface. Cut the dough into 1/2-inch wide or more narrow strips, as long as you like. Early recipes called for 4-inch cheese straws, but today the longer strips make for a grander display.

Then carefully transfer those strips to a baking pan and bake at 350 degrees until they are lightly browned around the edges. It's really personal preference. Mid 20th Century recipes called for pale cheese straws, but we know now that a little browning and caramelization makes for more flavor. Somewhere between 15 and 20 minutes is best.

And using my basic recipe you can vary the cheese, adding a mix of sharp cheddar and parmesan, or half parmesan and half crumbled blue cheese. I do find that freshly grated extra sharp cheddar — meaning you shred it versus buying already shredded — yields the best results. You can use half whole-wheat flour, and you can fold in finely chopped pecans or Rice Krispies if you like! And vary the heat by adding more cayenne or less cayenne, depending on your preference. I don't salt my cheese straws until they come out of the oven, but if you like a saltier snack, add 1/4 teaspoon salt while mixing the batter.

And if the whole rolling and cutting into strips is just too much, tear off a long sheet of waxed paper and place half the dough on a sheet, then roll it with your palms into a 1-inch thick log. Wrap up tightly in the waxed paper and chill until firm. Repeat with the other half of the dough. When ready to bake, unwrap the logs and slice into 1/4-inch coins, place on the baking sheet and bake 8 to 10 minutes, or until lightly browned around the edges.

That's it! Cheese straws are easy, versatile, cheap to make, easy to gift and so fun to nibble during the holidays. They may not be originally Southern, but they're nearly ours. And don't stress about making them perfectly the first go-around. People have been baking cheese straws and washing them down with a favorite holiday beverage for centuries. If they can do it, you can do it, too!

Anne's Cheese Straws
You can freeze unbaked cheese straw dough for up to one month.

Wrap the ball in wax paper and refrigerate for 30 minutes.

Heat the oven to 350 degrees. Adjust one rack to the center of the oven.

Remove the dough from the fridge, and cut the ball in half. Re-wrap one half of the dough and return to the refrigerator. Place the other half on a lightly floured work surface and roll out the dough into a rectangle about 1/4 inch thick. With a pastry cutter or pizza wheel, cut the dough into 1/2-inch strips and gently transfer to a baking sheet. Repeat with the remaining dough.

Bake the cheese straws, one baking sheet at a time, until puffed up and golden brown, 15 to 20 minutes. Immediately sprinkle with salt, and then transfer to a wire rack to cool completely. Repeat with the remaining cheese straws.

Serve the cheese straws with cocktails or tomato soup. Extra cheese straws can be stored in an airtight container for up to one week at room temperature or up to three months in the freezer.