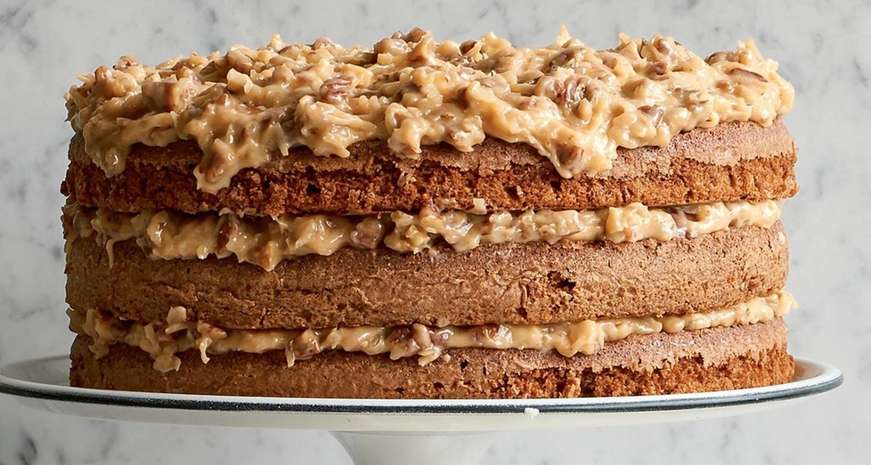 Taste of a Place: Anne Byrn explores the secret ingredient in desserts from the South's most remote places

In this edition of her Taste of a Place column, bestselling author and former Atlanta Journal-Constitution food editor Anne Byrn examines the history of canned milk and how it has shaped the dessert recipes of the South's most remote kitchens, and she shares her take on a decadent German chocolate cake.

The tragic news of Hurricane Harvey flooding the Houston area and Hurricane Irma continuing to make its way up the Florida panhandle through the Southeast brings to life raw, natural events that even our high-tech world cannot control. Floods, hurricanes, tornadoes, fires — they all have had an effect on how we live, and cook, since the beginning of time.

I was reading this week about the man who mapped out Texas cities Houston and Galveston. His name was Gail Borden, a newspaperman and surveyor, and also the inventor of canned milk. A mainstay in frontier and remote kitchens of America, canned milk — be it evaporated or sweetened condensed — has been a godsend in adverse weather and times without refrigeration. It can be a substitute for fresh milk in all sorts of recipes, and in fact, its viscosity mimicks that of cream. When added to fudge, fillings and frostings, our ancestors knew that canned milk added a rich, unmatchable texture to their recipes.

What would America's remote locations — the barrier islands of Virginia and the Carolinas, the islands of Hawaii, the Florida Keys, and small towns and pioneer farms scattered across our country — have done without the convenience of canned evaporated milk? It was a ready source of milk for drinking and cooking when fresh milk wasn't available. You simply added four parts water to one part milk. And before the days of pasteurization and refrigeration, canned milk was the only safe milk to drink.

If you have a family recipe today that calls for canned milk, chances are it's an old one. One of my favorites is German chocolate cake.

German chocolate cake uses canned evaporated milk to make its cooked filling and frosting velvety in texture. Added to the eggs, butter and sugar, along with the chopped pecans and coconut, the filling is cooked slowly over low heat and thickens almost into a pudding. After cooling, it is spread between three layers of German chocolate cake and piled generously on top, with, hopefully, just enough left over to sneak a big, spoon-filled taste. Honest-to-goodness and unapologetically rich, it is a cake that smacks of the late 1950s. 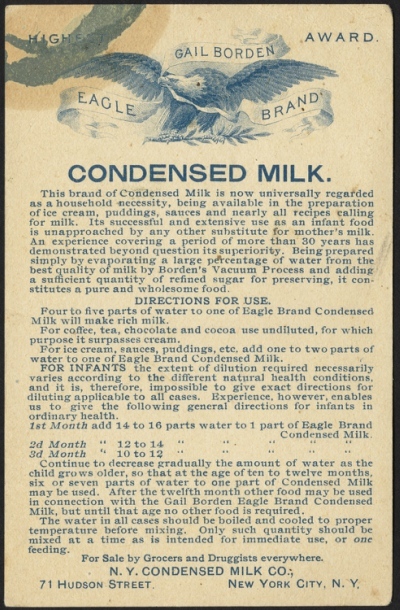 The history of canned milk
Gail Borden was born in New York and raised in Kentucky and Indiana, but he moved south to Mississippi, and later Texas, for health reasons and a warmer climate. In Texas he prepared the first topographical map of the state and founded the first newspaper, the Telegraph and Texas Land Register. And after Texas separated from Mexico in 1836, Borden helped write the state's constitution. Clearly, he was not an idle man.

But his wife and children died of yellow fever in 1844 and 1845, and afterwards Borden focused on making food safer to eat for all. He created an early form of beef jerky, a biscuit of dehydrated meat. In 1851, he was returning from a trip to England when he saw children dying on his ship after they were fed milk from diseased cows on board. Witnessing this event stuck with Borden and drove him to invent a safer milk option: sweetened condensed milk.

As it turned out, the sugar in Borden's mixture helped soak up the water in the milk, and it inhibited the growth of bacteria. The concoction was a yellowish, sweet, thick milk, and at first it didn't sell. But then the U.S. government purchased it to use as rations for the Union Army during the Civil War, and its popularity stuck around. After the war, production took off.

Producing unsweetened evaporated milk — what you find in German chocolate cake filling — was a bit more complicated. In 1884, the Helvetia Company received a patent for evaporating milk without sugar, and that company would become Pet Milk, a staple in kitchens nationwide. 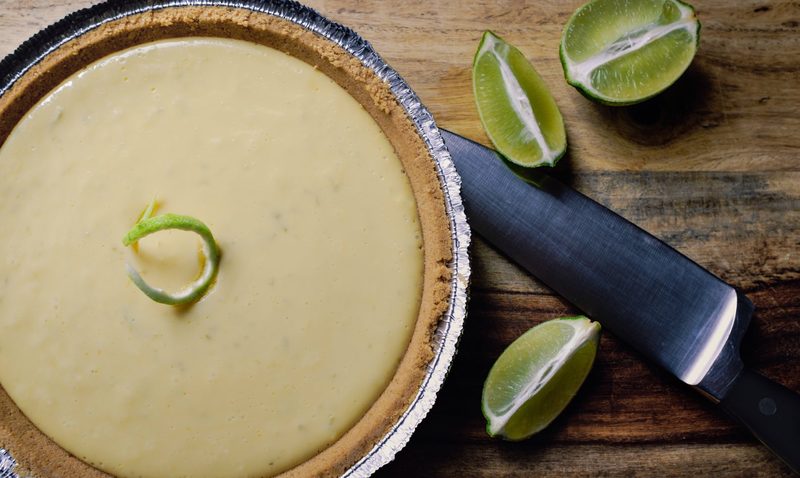 Canned milk in other desserts
As hurricanes force residents on our vulnerable barrier islands to evacuate, we tend to forget that remoteness has created characteristic recipes. One more popular recipe is for Smith Island cake — a 10-layer yellow stack cake with chocolate fudge filling. In 2008, the Maryland Legislature named it its state cake, which brought a good deal of attention to this old barrier island located 10 miles offshore of the Chesapeake Bay. As you might expect, the crucial ingredient in the cake and the frosting is canned evaporated milk.

Down the Atlantic coastline, you can find the Atlantic Beach Pie, an intensely lemon-flavored pie with a characteristic Saltine cracker crust. It uses sweetened condensed milk in its filling, as does the perennial favorite, Key lime pie — perfection on a bed of crushed graham crackers. Key lime pie always seems current, as timeless as a Jimmy Buffet song. But the first pies were made in the Keys in the 1850s, about the time sweetened condensed milk came onto the market. The original crust was a pie pastry, and the pie was topped with meringue.

On farms and in little towns in the Midwest, people learned to make fudge with the canned milk on the shelf. In the 1930s, a recipe for "mock whipped cream" became popular; in it, the evaporated milk is chilled as cold as possible and then whipped. And down along the Texas border with Mexico, another cake was born out of three milks: tres leches cake.

Texas Monthly magazine writer Patricia Sharpe surmised in 1999 that tres leches cake originated as a promotional recipe by a canned milk manufacturer. In the 1940s Nestle opened an evaporated milk manufacturing plant in Mexico, and a recipe for this cake was on the label of those cans. But MM Pack, who discovered the Nestle and Mexico connection, says the cake is even older and originated in Europe, where old Portuguese and Spanish desserts were often sponge cake soaked in egg cream. 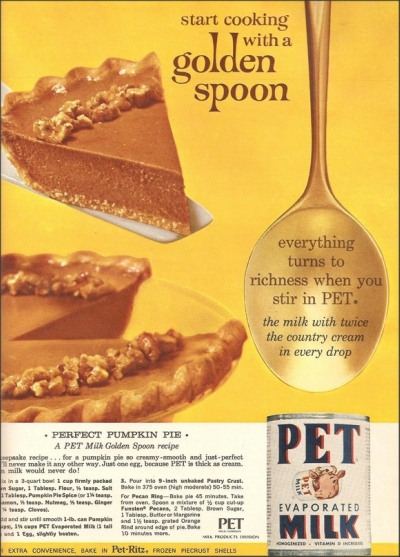 German chocolate cake was never baked in Germany
In the spring of 1956, Daisy Pearce, a newspaper food columnist in Irving, TX, wrote about a recipe for "summer German chocolate cake" that would develop into an American classic. The layer cake, which was shared by her daughter in Oklahoma, contained a rich and irresistible filling made using evaporated milk. By fall, that recipe had been demonstrated by county agents across Texas and baked at the state fair.

A year later, a Dallas woman submitted a similar recipe to the Dallas Morning News food section. The editor ran the recipe once, then again, making a few changes, such as reducing the amount of chocolate used. The cake contained German's Sweet Chocolate, named for its English inventor Sam German. After home cooks got a taste of this cake loaded with chocolate, coconut and locally-grown pecans, German chocolate sales shot up 73 percent in Texas. Baker's, the chocolate manufacturer, realized it had a publicity dream come true and sent the recipe to food editors across the country. By the next year, the recipe was printed on the back of the chocolate box.

While chocolate cake made with German's wasn't new — recipes for these cakes can be found from as far back as the 1940s — the filling, made thick and rich with evaporated milk, was an innovation destined to stick around.

Note: If you use lightly salted butter, reduce the salt in the cake to 1/4 teaspoon, and omit the salt from the filling. This recipe works best with unsweetened coconut, but if you cannot find it, sweetened will do. Pecans are much more delicious if toasted first. Place them on a baking pan in the turned-off oven after you remove the cakes. When they are medium-brown and fragrant, after 3 to 5 minutes, remove from the oven and chop.

Instructions
To make the cake: Place a rack in the center of the oven, and heat the oven to 350 degrees. Lightly grease and flour three 9-inch cake pans, and shake out the excess flour.

In a large bowl, sift together the flour, baking soda and salt. In a small bowl, cover the chocolate with the boiling water. Stir to melt the chocolate.

In a second large bowl, cream together the sugar and butter using an electric mixer on medium spead. Continue to beat until light and fluffy, about 2 minutes. Add the egg yolks, one at a time, beating well after each addition. Beat in the vanilla. Alternately add the flour mixture and buttermilk to the batter, blending on low speed, and beginning and ending with the flour mixture. Fold in the melted chocolate.

In a third large bowl, beat the egg white with clean beaters on high speed until almost-stiff peaks form, about 4 minutes. Fold the egg whites into the batter. Divide the batter between the three reserved pans.

Bake the cakes until they spring back with lightly pressed in the center, 28 to 32 minutes. Let the cakes cool in the pans for 15 minutes. Run a knife around the edges of the pans, and gently shake to loosen the cakes. Invert the cakes once and then again onto the racks to cool completely right-side up, about 45 minutes.

To make the filling: In a large saucepan, combine the evaporated milk, sugar, egg yolks, butter, vanilla and salt. Place over medium heat and cook, stirring constantly, until the mixture thickens and is caramel in color, about 15 minutes. Remove from the heat and stir in the coconut and pecans. Let the mixture cool until it is thick enough to spread. (You can refrigerate the filling while the cake layers cool. Or to speed the process along, you can make the filling before you bake the cake.)

To assemble, place one cake layer on a serving plate and cover with 1 cup of filling, spreading it to the edges. Top with the second layer and repeat. Top with the third layer, and pile the remaining filling on top, leaving the sides bare. Refrigerate for 1 hour before serving.

This recipe was originally published in "American Cake: From Colonial Gingerbread to Classic Layer, the Stories and Recipes Behind More Than 125 of our Best-Loved Cakes" by Anne Byrn (Rodale, 2016).