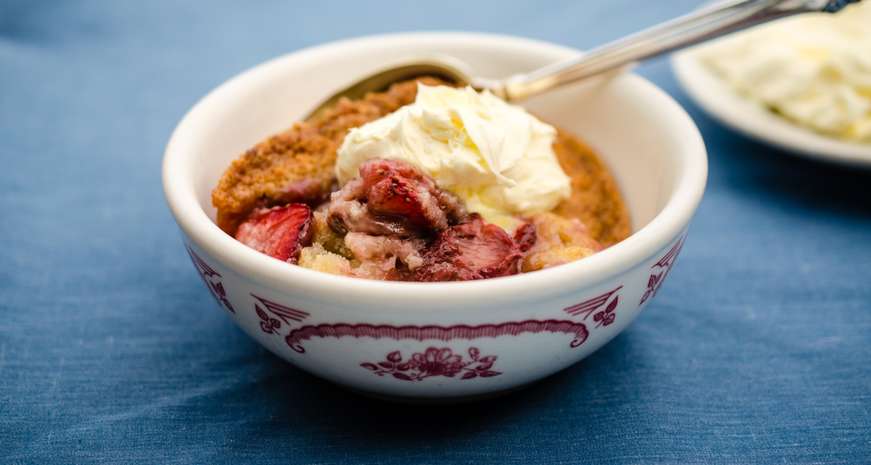 Strawberries, cream and a little bit of culinary science make for a glorious spring cobbler

When I was 18, I went to visit a friend in London. I was supposed to be there for two weeks. Instead, I got a job as a waiter and stayed for over two more months. It was an incredible summer.

One memorable day, I headed off to see Kew Gardens by train. Founded in 1759, this Royal Botanic Garden is a UNESCO World Heritage Site and was also outside of my normal travel zone. Managed by the UK Department for Environment, Food and Rural Affairs, Kew’s mission is to be the global resource for plant and fungal knowledge. At its very heart is science.

My memory might be tinged with a bit of sadness, but it still hadn't ruined strawberries and cream. Bright, juicy, strawberries bathed in rich, decadent cream is a timeless pairing, especially in England. Some things just go together like bread and butter.

As a cook and food writer, I am very intrigued by how flavors work together. Flavor is, after all, a complex subject, and it is highly unusual for one single substance to be responsible for the flavor of a particular food. Usually there is a mélange of volatile compounds present, and other senses may be involved — sight, touch and even sound. 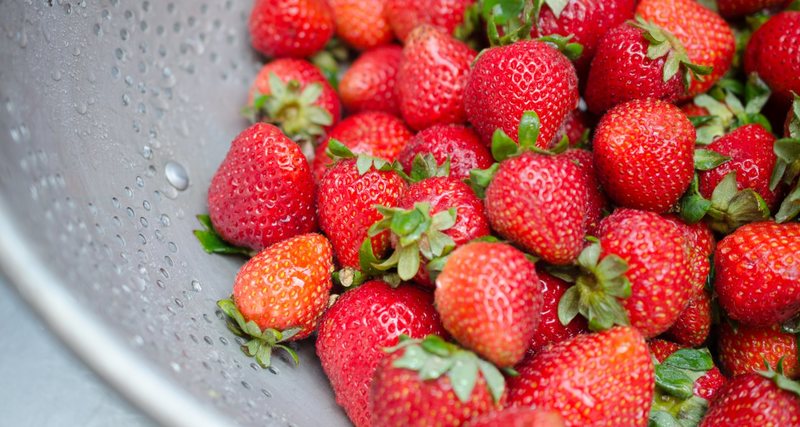 Science is the reason that the combination of strawberries and cream tastes so good. You’ve likely heard of the basic tastes: sour, salty, bitter, sweet and savory (or umami). Scientists now think we also have flavor receptors for fat, which affects how volatile compounds are released in our mouths and, ultimately, how these flavors are perceived.

According to chef James Briscione, Director of Culinary Research at the Institute of Culinary Education and author of The Flavor Matrix: The Art and Science of Pairing Common Ingredients to Create Extraordinary Dishes, “The big connection we see is that fresh strawberry has lots buttery aromas that we don’t necessarily detect with the 'naked nose.' Mesifurane (an aromatic compound) in particular, is a buttery, toasted aroma that is one of the top impact odorants in strawberry flavor. Obviously, we are going to find those same buttery aromas in cream.” It’s this doubling up of that buttery aroma that makes the combination of strawberries and cream especially pleasing.

To take advantage of this bit of kitchen chemistry, I've amped up the flavor of traditional strawberries and cream by baking them in a butter-filled cobbler that is full of flavor-boosting tricks. 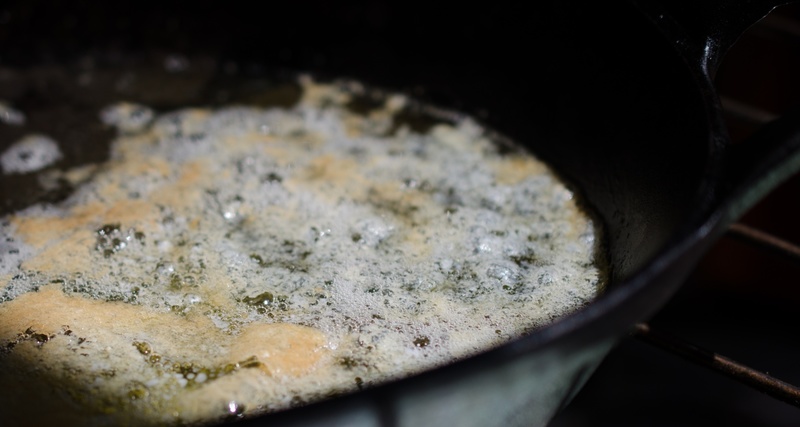 Most cobbler recipes call for simple melted butter, or else a crumbly topping. Here, I've decided to brown the butter — an easy way to add complexity to just about any dessert. In my mind, brown butter often seems like pure magic, but it really comes down to, well, science. Butter contains butterfat, milk solids and water. Once melted, the fat and milk solids will separate. Over time and additional heat, the butter sizzles and spits as the water inside evaporates. After enough water evaporates, the butter's temperature continues to rise above the boiling point of water. At 250 degrees ... poof! The magic happens. The milk solids and proteins begin to brown and take on the delicious, intoxicating flavor and aroma of toasted nuts. (That’s why the French call it buerre noisette or hazelnut butter.)

Instead of browning the butter in a skillet on the stove, I brown it in the pan in which the cobbler will bake and then dump it, gloriously, into the batter. As the batter hits the hot pan, it starts to swell and rise immediately and its edges turn crisp golden brown in no time at all. 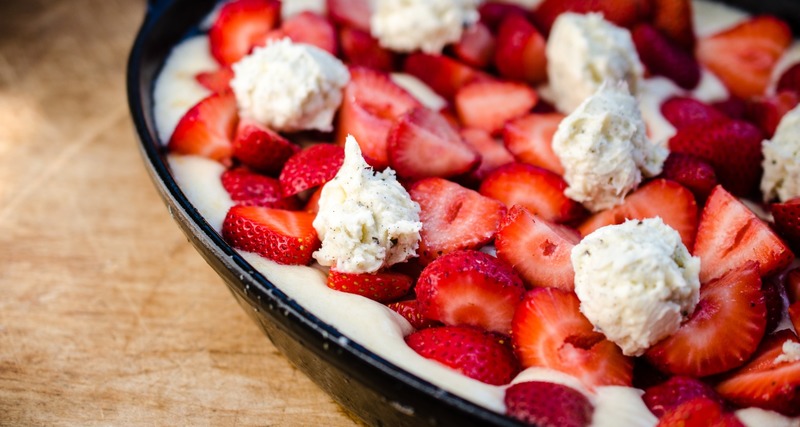 To make sure my cobbler still evoked the experience of eating a bowl of strawberries and cream, I added in dollops of cream cheese — mixed with a bit of sugar and vanilla bean seeds to temper its tanginess —  along with the berries. Clotted cream, the traditional British topping, isn't as stable as cream cheese and would have disappeared into the batter. (I also tried using cream instead of milk in the batter mixture itself, but it didn’t sufficiently produce the strawberries and cream experience, so I stuck to milk.)

As the cobbler bakes, the strawberries burst and collapse and the cream cheese sinks into the brown butter batter. The resulting dessert is sweet and luscious — absolute glorious excess. I may still need to get to Kew Gardens, but thanks to a bit of science, this strawberries and cream cobbler is absolutely spot-on. 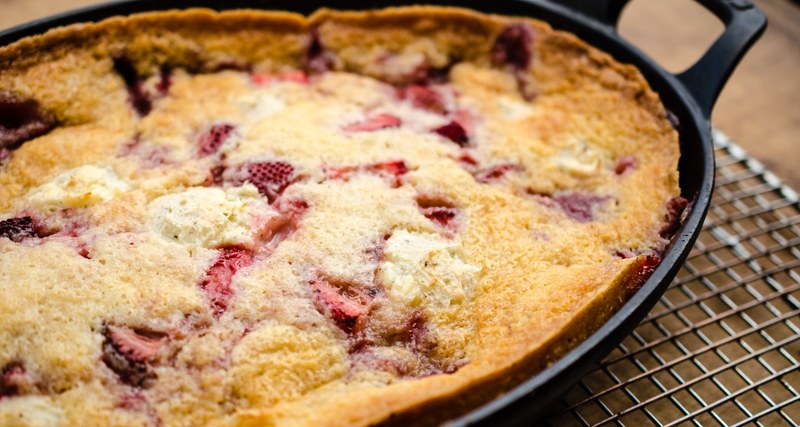 Ingredients
Heat the oven to 350 degrees.

In a small bowl, combine the cream cheese, 2 tablespoons of the sugar and the vanilla bean seeds. Using a rubber spatula, stir until completely smooth.

Place the butter in a large cast iron skillet or ovenproof baking dish. Bake until the butter is lightly brown, 8 to 10 minutes.

Meanwhile, in a large bowl, whisk together the flour, baking powder, and salt. Stir in the milk and the remaining 3/4 cup sugar. Remove the skillet from the oven and carefully pour the browned butter into the batter; stir to combine.

Pour the batter all at once into the skillet, then scatter the strawberries over the batter. Quickly dot the top of the cobbler with the cream cheese mixture. Pop it in the oven and bake until the top is golden brown and a cake tester inserted into the batter comes out clean, about 1 hour. Serve, hot, warm or at room temperature with whipped cream, clotted cream or ice cream, if desired.