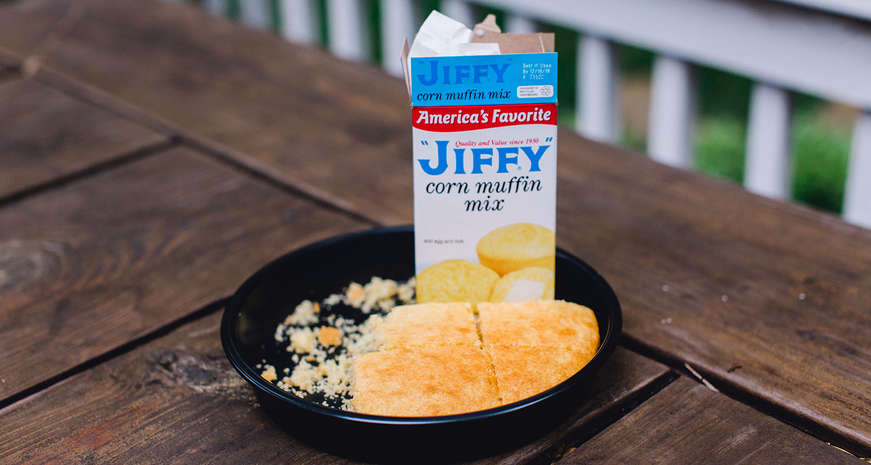 Our preferred method of cooking classic Southern cornbread involves a cast iron skillet and a little bit of elbow grease. But (real talk) we've got to admit that sometimes we take a few shortcuts and pull out a mix.

The cornbread mix selection at most grocery stores is pretty extensive. From honey to cheddar jalapeño, you can pretty much always find a cornbread mix that fits your taste. Still, we wanted to know: With this large selection, which mix tastes the best? Which has the best texture and flavor?

The only way to find out? Pull out a lot (and we mean a lot) of cake pans and get baking. Our results, below.

Our testing process and criteria
We selected seven cornbread mixes to bake in the test kitchen to see if any of them stood up to real-deal homemade cornbread — golden brown, flavorful, moist, and a little crumbly, but not so much that the bread falls to bits as you pull it it out of the pan. Although some mixes required more ingredients than others, we followed the directions written on each package and baked all of the cornbread at the same time.

Our judges were asked to rate each cornbread for its corn flavor, texture and appearance on a scale of 1 to 5, and to provide their overall impression. We tallied up the results from our nine judges, and the highest possible score a cornbread could receive was 135. We had a gut feeling we knew which mix would come out on top, but in the end, we had a surprise winner.

Below are the results of our cornbread taste test, ranked from least enjoyable to the very best. 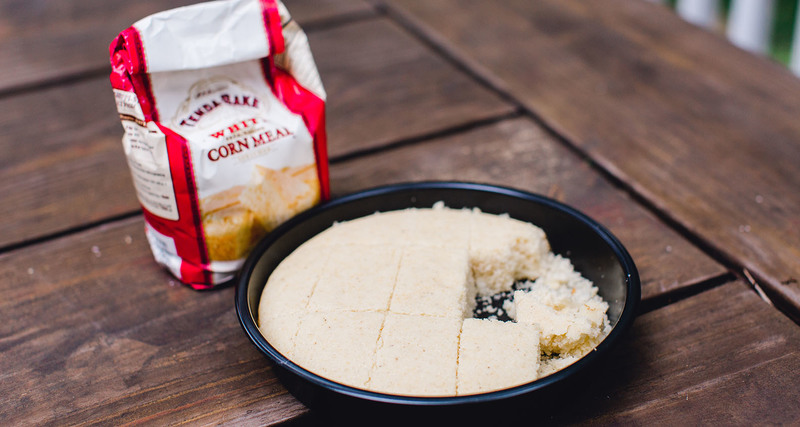 Tenda-Bake Cornmeal Mix
This sad dish of cornbread (if you can call it that) was so dry and pale that we could barely get a piece of it down or out of the pan. Our tasters were not afraid to point out its flaws. One even called it “dry, crumbly and sad!” It was clear that this cornbread lacked flavor, but another glaring flaw was its texture. One taster described it as grainy and too crumbly, while another said “[This cornbread] is dusty and needs a prayer.” Overall this cornbread was “awful, awful, awful.”
Score
Corn flavor: 15 Texture: 15 Appearance: 12 Total: 42 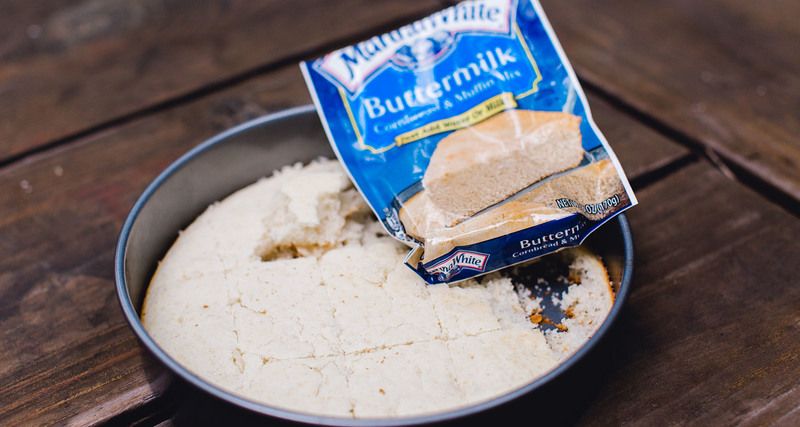 Martha White Buttermilk Cornbread
When you look at a piece of cornbread, it should make you hungry. That was not the case with this cornbread mix. Not only did one taster call it "white, flat and boring," its corn flavor was lacking and it had an unappealing texture as well. “[It] tastes like dry Cracker Barrel cornbread,” another taster said. Yet another wrote, “[This cornbread] is not the worst, but it tastes boxed and processed.” One particularly detailed taster said, “I think this was included in Civil War rations. Extraction was, shall we say, difficult.” Indeed, you couldn’t take a full piece out of the pan without it crumbling into dust.
Score
Corn flavor: 14 Texture: 16 Appearance: 14 Total: 44 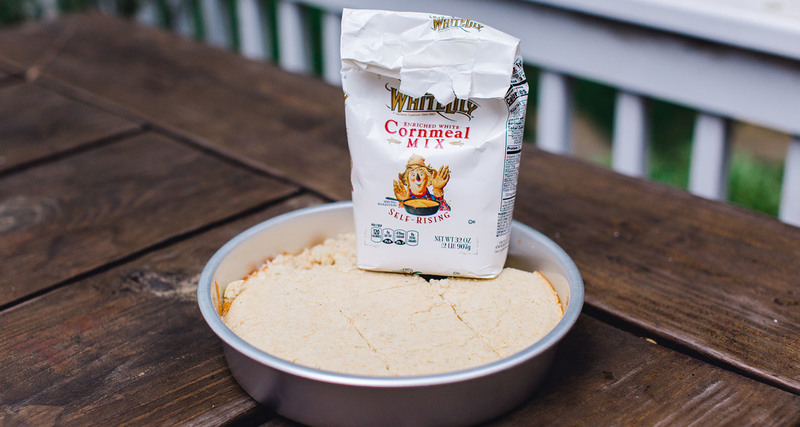 White Lily Cornmeal Mix
When it comes to making biscuits, White Lily flour is, hands-down, one of the best products to use. However, its cornmeal mix definitely missed the mark. Our judges were unimpressed with this bland, grainy cornbread. “PALE! Meh. Needs a lot of butter,” one taster commented. Along with a lack of flavor, it was really difficult to extract a full piece of cornbread from the pan. “You can’t even take it out of the pan without it crumbling,” one disappointed taster remarked. Another taster said “[This cornbread] is grainy and crumbles into nearly powder.” One of our tasters told us later that he loves using this mix at home, but he puts his own touch on it by adding in cheese, bacon and/or scallions. He also suggests adding a little more buttermilk than the recipe calls for, then letting the mixture rest for 10 minutes, to hydrate the cornmeal, before baking. Wise advise.
Score
Corn flavor: 17 Texture: 15 Appearance: 16 Total: 48 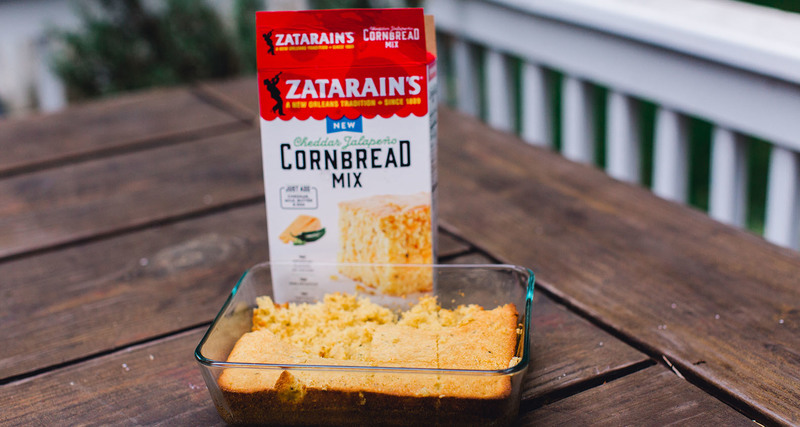 Zatarain’s Cheddar Jalapeño Cornbread Mix
We broke our own rules by adding this cornbread mix into the taste test — it's not a traditional, plain mix. However, we really wanted to know how a spicy cornbread stood up against the rest of the group, and since all Southerners put their own touch on cornbread, we figured spicy cornbread mix would be a frequent-enough purchase to test. We also didn't forewarn our tasters, so they were definitely surprised by its flavor.

They did, however, have mixed feelings. One taster wrote: “It’s sweet then POW! So spicy I like it, but confused, but then I like it.” To one taster, “the spiciness was more intense than expected.” Many tasters, however, were disappointed in its texture. "It’s soft, crumbly and sad. Sad like the end of a Trump tweet,” one wrote. Still, its golden brown color was much more appealing than other contestants in this taste test. Overall, it was a straight middle-of-the-road offering.
Score
Corn flavor: 26.5 Texture: 24 Appearance: 25 Total: 75.5 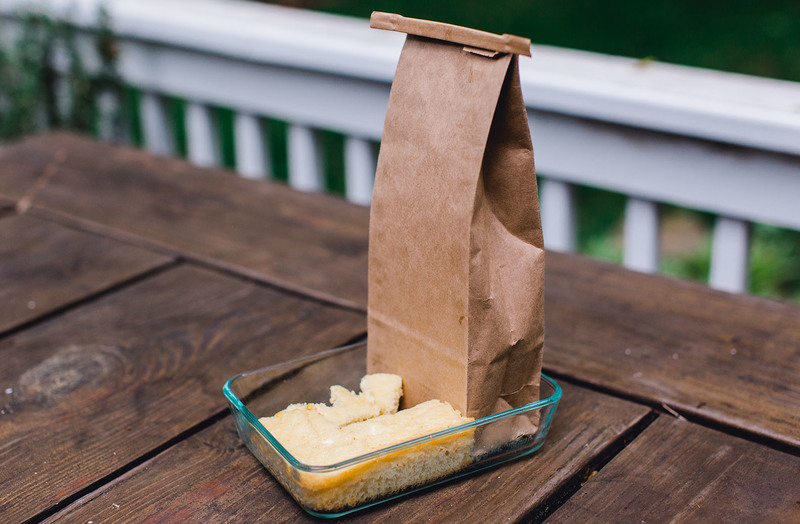 Causey Cornmeal Mix
You have to put a lot of effort into making cornbread out of this cornmeal mix. You’ll need sugar, eggs, vegetable oil, sour cream and creamed style corn to turn this mix into cornbread. If you're willing to put in a little more effort, however, ou'll be rewaded with a moist, tender bread. Too moist? Perhaps. Our tasters were split. Some thought this cornbread was too moist to even be considered cornbread: “It’s more like cornbread pudding. Not cornbread!” Another wrote, “Corn mud. Looks way cuter than it tastes. I’m unhappy.” But others found its texture particulary delightful after eating some of the drier options: “Amazingly soft like a squishy pillow — love it,” one taster said. “Great overall, I really like how soft, dare I say ... supple, this one is.” Still, all of those rich ingredients left the cornbread with a distinct greasiness that left our tasters wondering what they had just eaten. Overall, this cornbread was “better than some, but we can’t all be winners.”
Score
Corn flavor: 28 Texture: 27 Appearance: 33 Total: 88 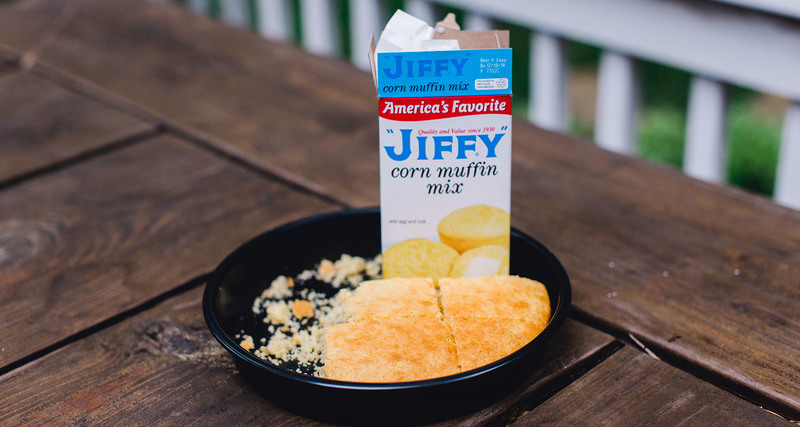 Jiffy Corn Muffin Mix
Chances are, if you’ve had Jiffy once in your life, you don’t forget its flavor or texture. When looking for a quick cornbread mix that doesn’t need 100 additional ingredients, Jiffy is one of our favorite mixes on the shelf — especially for those of us who like a sweeter cornbread — and it performed admirably in our taste test. Tasters found it easy to extract a piece of the cornbread from the baking pan, with only a few crumbs left behind. “[Texture is] what I expect from cornbread,” one taster said. “It passed the test.” “It’s a nice mixture between crumbly and sturdy. Hello Jiffy!” another taster wrote. Its flavor was slightly sweet and corn-forward, but tasters thought it could use a little bit more oomph and a tad more moisture. “[It’s] a good hearty cornbread,” one taster said. “Love the flavor and texture that’s slightly crumbly, but ... doesn’t fall apart.”
Score
Corn flavor: 33 Texture: 34 Appearance: 36 Total: 103 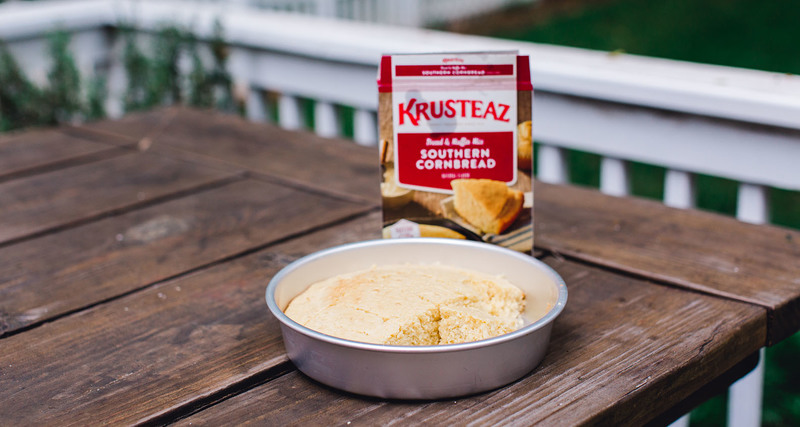 Krusteaz Southern Cornbread Mix
Going into the blind taste test, our assumed that Jiffy would come out on top, so we were a bit surprised with the final tally. With a bit more corn flavor, Krusteaz knocked Jiffy out of the top spot. One taster wrote: “After every other cornbread here, this was a goddamn salvation. It’s soft and pillowy. Not too shabby.” Tasters found this mix produced a cornbread that was "more flavorful than most." Another taster said this cornbread “was very sweet and does kind of have a good corn aftertaste.” Our tasters were also happy to see this cornbread could be extracted in one piece with ease. There was a slight crumble, but it was a healthy and what you should expect. However, with the good comes the bad. One taster, however, truly disliked Krusteaz: “It seems artificial. This is kinda bullshit.” You can't please 'em all.
Score
Corn flavor: 35 Texture: 34 Appearance: 35 Total: 104