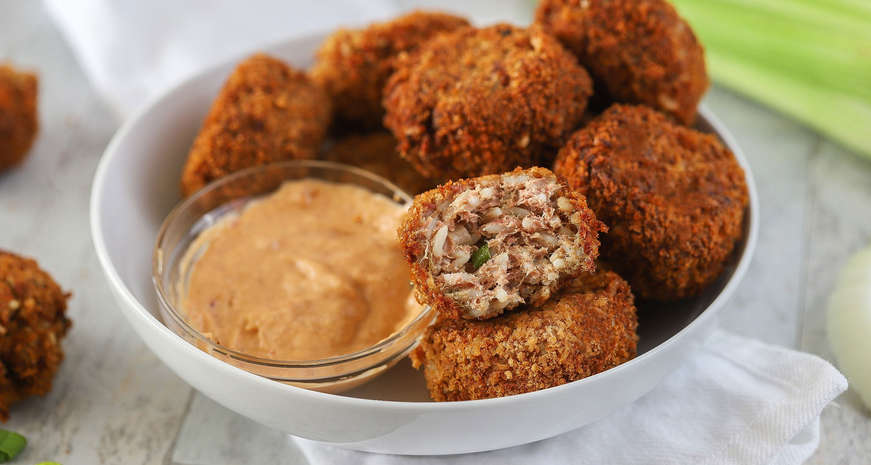 7 Southern specialties that range from the exotic to the familiar

The South is full of food dishes that are specific to the region and have been kept secret from the rest of the country. Some dishes carry on traditions that go back centuries and others are new takes on the South’s best food. And some, we're not ashamed to say, might be just a little weird.

Here are seven Southern dishes you might not have heard of:

Souse
Where you can find it: throughout the South
Also known as head cheese, this southern-style pâté-like dish is cooked by boiling down a pig head with herbs and vegetables. After boiling the mixture for hours, the meat becomes tender and falls off the bone. While the dish is chilled, the gelatin from the pork bones binds the souse together. The seasoning for souse depends on the region and ranges from hot sauce to vinegar. Unfortunately, no cheese is involved in this dish.

Boudin Balls
Where you can find it: Louisiana
This new take on the traditional French and Cajun sausage, boudin, leaves the sausage out of its casing and turns it into a deep-fried ball. Traditional boudin is a mixture of pork shoulder and liver, rice, spices, onion, green bell pepper and onions. By adding bread crumbs, eggs and some hot oil for frying, boudin balls are born.

Chitlins
Where can you find it: throughout the South
This Southern side is made from the small intestines of pigs, which are boiled or fried and served up with apple cider vinegar or hot sauce. This dish comes from an era when preservation did not exist and people used every edible part of the animal. While that is no longer a concern this dish is still considered a Southern delicacy.

Hominy
Where can you find it: throughout the South
Hominy is made from the kernels of corn “which are soaked in an alkali solution of either lime (the mineral, not the fruit) or lye.” This process removes the hull and germ of the corn and “causes the grain itself to puff up to about twice its normal size.” You can then use canned hominy in stews or soups. Dried hominy is can be ground into masa for tortillas or into another Southern favorite — grits.

Gelatin Salads
Where you can find it: throughout the South
This dish has been a part of Southern party spreads since our grandmothers were in the kitchen. While this is considered an odd dish people still like to serve it up at picnics and birthdays. Southern Living brought some gelatin salads into the 21st century with updated flavor combinations to try the next time you want to cook this dish.

Frog Legs
Where can you find it: Louisiana, Arkansas and Texas
Whether they taste like chicken or not, frog legs are a Southern delicacy for those with adventurous taste buds. The dish is well-known in Louisiana and is a staple in Cajun cooking.

Lamb fries
Where you can find it: Kentucky
The name of this dish is a little misleading. No lamb fries are not French fries covered in lamb. They are actually lamb testicles. The testicles are sliced, battered and fried, then topped with brown gravy. You can find this dish in restaurants throughout Kentucky.

13 Southern food blogs you should be reading

The story of Southern fried quail

13 Southern food blogs you should be reading

The story of Southern fried quail