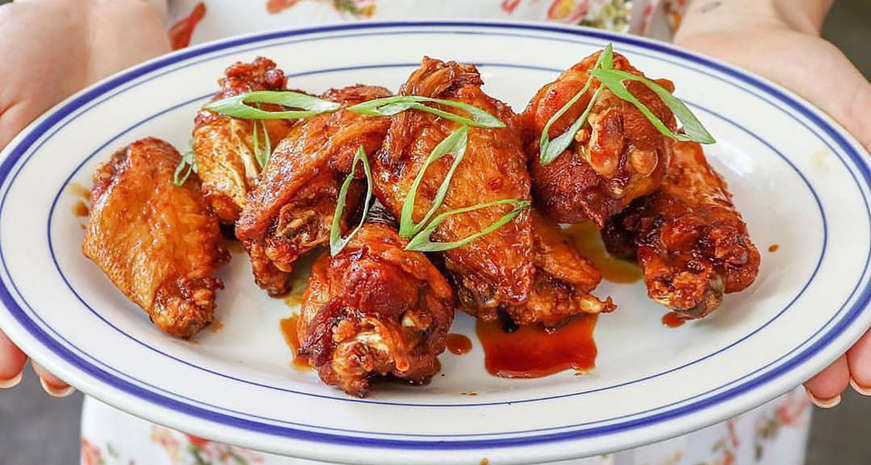 Inman Park restaurant Hampton + Hudson is hosting a Super Bowl tailgate, complete with specials on dishes like these hot wings.

Super Bowl Sunday is an unofficial national holiday that has taken place at the start of every year since 1967. For over 52 years two teams have met on the gridiron to battle it out to be named champions of the entire sport.

Emotions run high, naturally, since sports teams engender feelings of pride, hometown memories and general self identity. But football — second only to God down South — can also bring together families, friends and strangers. On Super Bowl Sunday over 111 million people will be gathered in homes, sports bars and restaurants just to see whether the New England Patriots or the Los Angeles Rams will be victorious.

This year, the Super Bowl is taking place at the Mercedes-Benz Stadium in Atlanta. Starting February 1, travelers from every corner of the country will begin trickling in and start hunting for something to eat. Atlanta restaurants, never those to miss out on a grand hustle, have begun rolling out various specials to drum up more foot traffic. Some of these deals aren't worth your time, but the ones we've chosen pack unbeatable prices with incredibly delicious fare, all making for one big touchdown.

Old Fourth Ward, Midtown and Inman Park
Atlanta has one of the most recognizable skylines in the country. With iconic landmarks such as the Georgia Aquarium, CNN Headquarters, Jackson Street Bridge and Martin Luther King Jr.'s memorial, this is one exciting and historically loaded town. If you're in town for the Super Bowl, chances are you're either staying, dining or at the very least planning on visiting one of these neighborhoods. 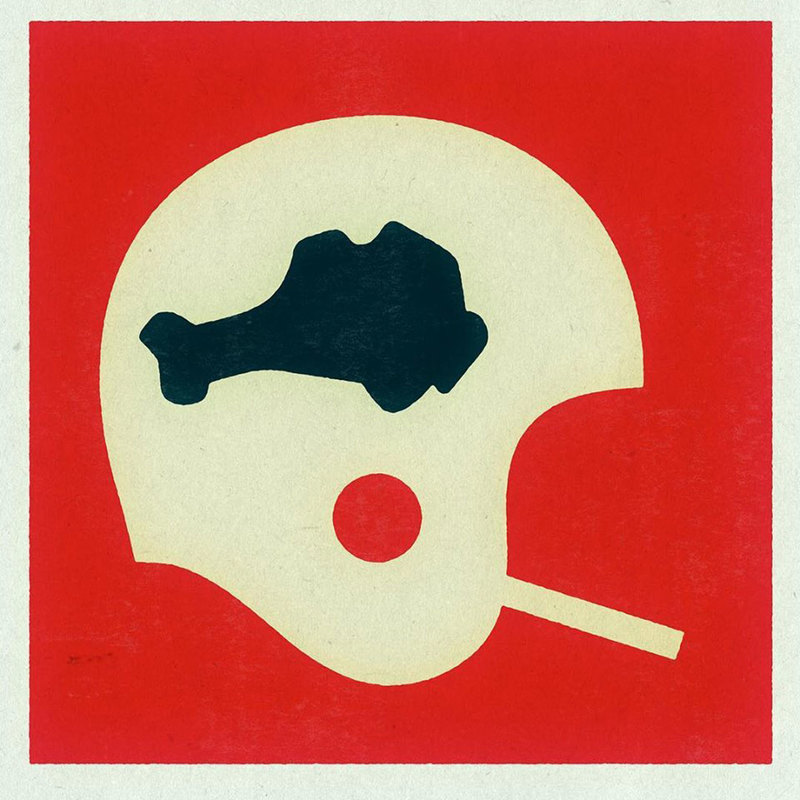 Fox Bros Bar-B-Q
This local barbecue staple is not only the official restaurant of the Atlanta Falcons, it also serves up some seriously delicious Texas-inspired food. Think smoked meats, fried pickles and more sweet tea than you should ever responsibly consume. This year, the team at Fox Bros is running a Super Bowl smoked wing catering promotion if you decide you'd rather watch the game from home. If not, the restaurant and its televisions will be tuned in.
Fox Bros Bar-B-Q is at 1238 Dekalb Ave. NE and 120 Ottley Dr. Connect with the restaurant on Facebook, Twitter and Instagram. 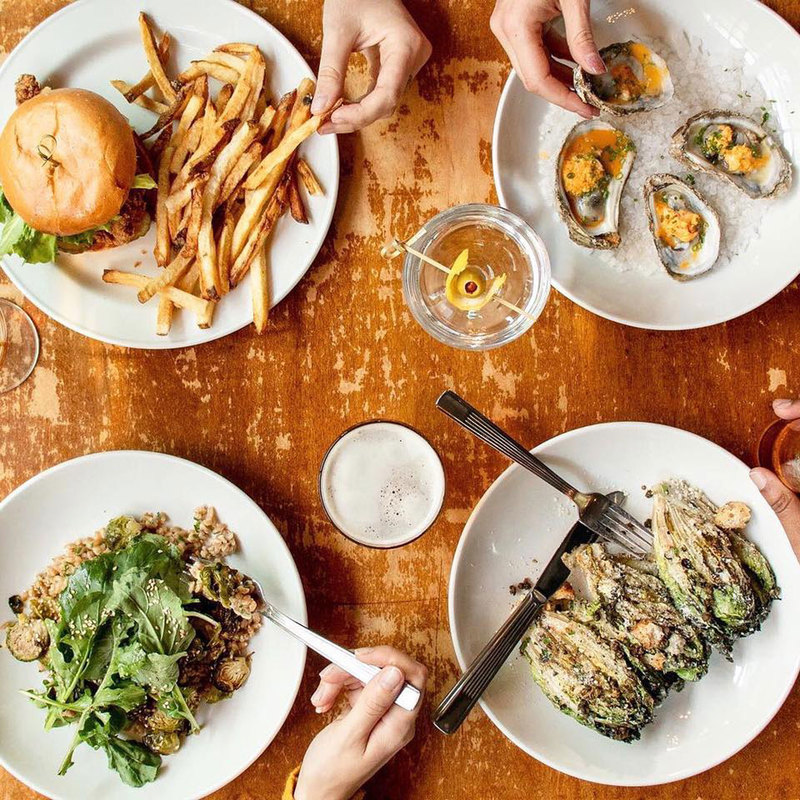 Hampton + Hudson
This Inman Park bar and restaurant is the go-to sports bar of choice for many locals. On Super Bowl Sunday it will be celebrating with its very own tailgate in front of the eatery. The celebration will start at 10 a.m. and go straight through game time — and most likely afterwards as well.
Hampton + Hudson is at 299 N. Highland Ave. NE. Connect with the restaurant on Facebook, Twitter and Instagram. 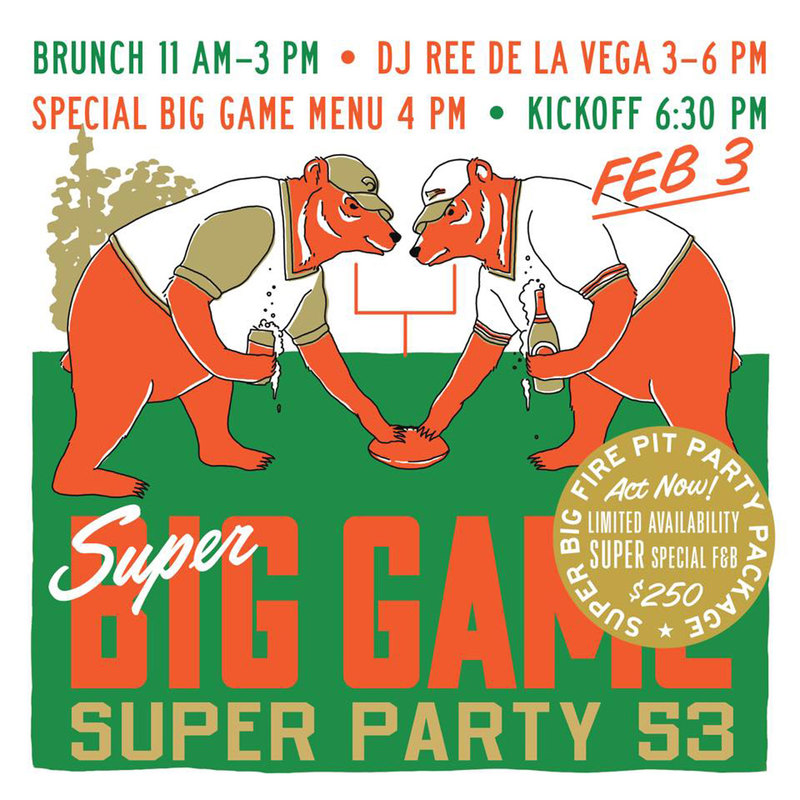 Ladybird Grove & Mess Hall
If you're looking for something to do on actual game day, Ladybird is running both a brunch and dinner special. Brunch kicks off at 11 a.m. and lasts until 3 p.m. when the restaurant will shut down for a few hours to prepare for dinner service at 6:30 p.m. Ladybird is bringing in jumbo-trons so no one will miss a single moment of the game. Attendance, however, will set you back a pretty penny. Expect to pay $250 for the fire pit VIP experience.
Ladybird Grove & Mess Hall is at 684 John Wesley Dobbs Ave. Connect with the restaurant on Facebook, Twitter and Instagram. 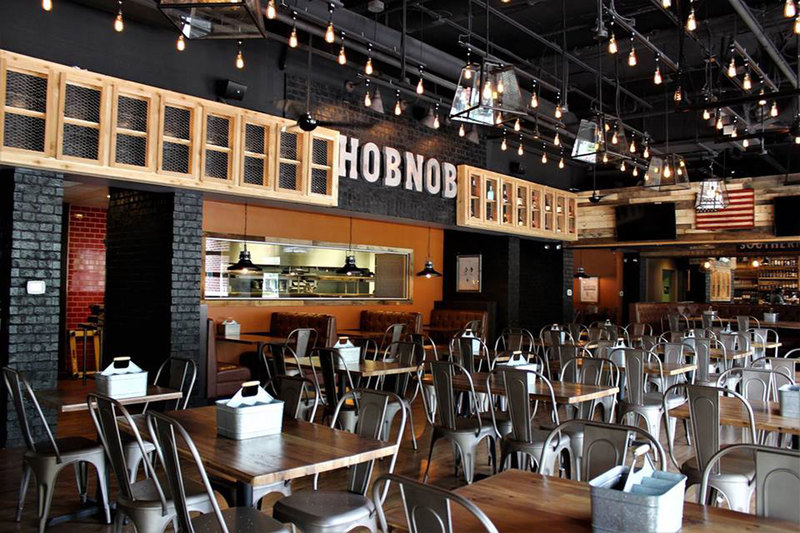 Hobnob Neighborhood Tavern
With locations in Midtown, Brookhaven and Dunwoody, Hobnob bills itself as a refined tavern with Southern flair. During Super Bowl weekend, Hobnob will feature an $8 chili special along, with several beverage deals.
Hobnob Neighborhood Tavern is at 1551 Piedmont Ave. NE, Atlanta; 804 Town Blvd. A1010, Brookhaven; and 1221 Ashford Crossing, Atlanta. Connect with the restaurant on Facebook, Twitter and Instagram. 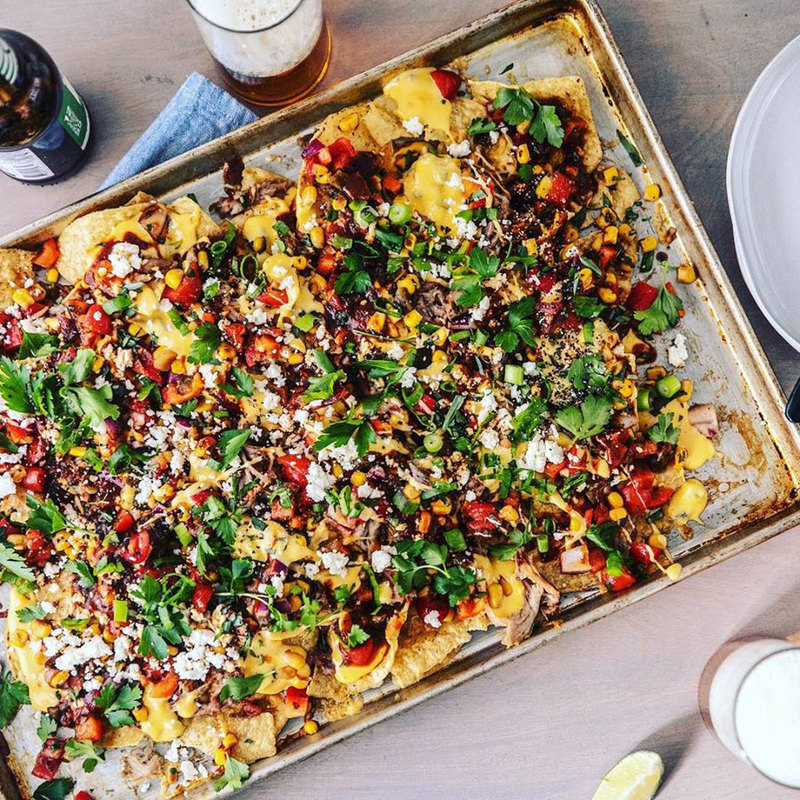 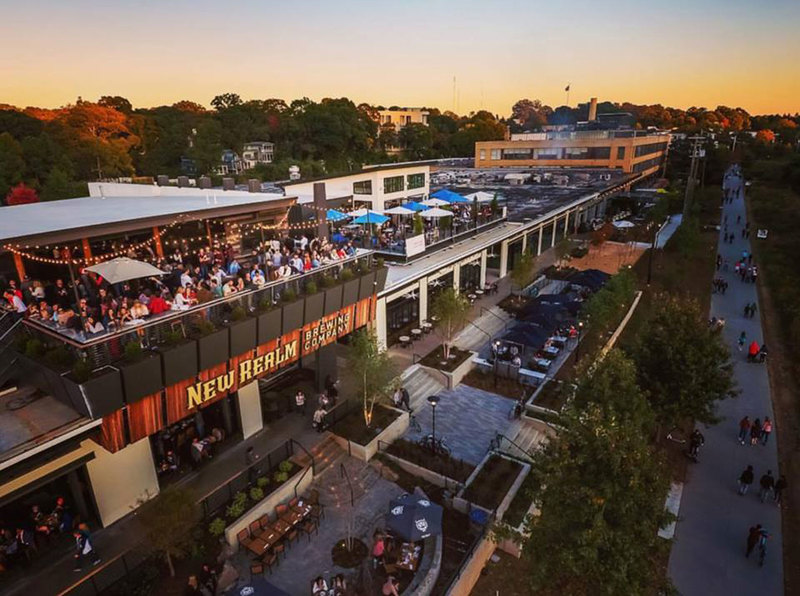 New Realm Brewing Company
This beer brewery is located just off Atlanta's BeltLine trail and boasts a rooftop, which means on Super Bowl Sunday you're in for amazing beers, views and a lot of company. New Realm will be running beer and food specials all week long so if you want to check them out before the madness of Sunday, pop in anytime after 11 a.m.
New Realm Brewing Company is at 550 Somerset Terrace NE. Connect with the brewpub on Facebook, Twitter and Instagram.

Downtown and Castleberry Hill
This historic neighborhood shares its backyard with the stadium. This neighborhood is a favorite hangout for locals after games, concerts and other events and the Mercedes-Benz arena. 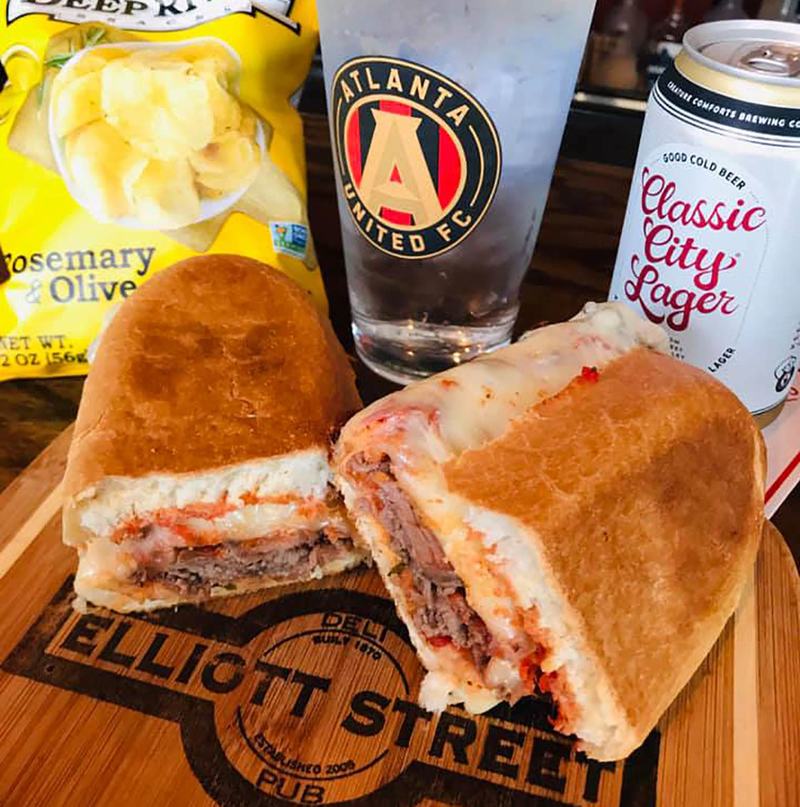 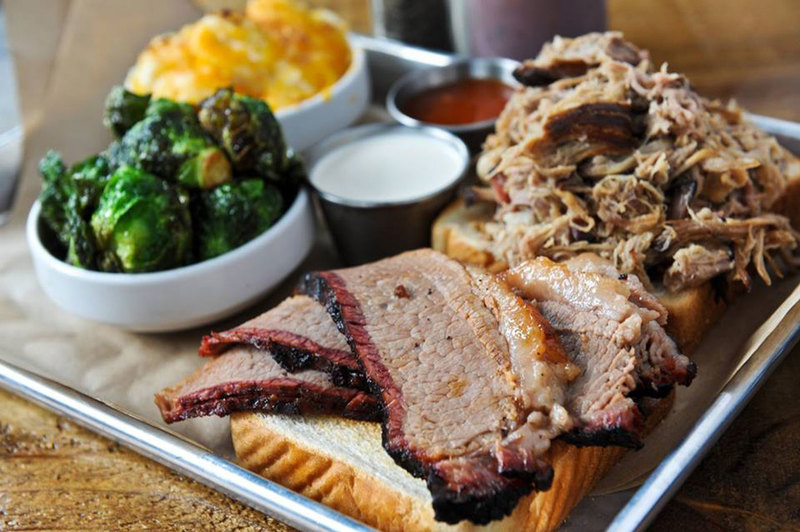 Smoke Ring BBQ
Just a few blocks away from Elliot Street, this restaurant serves up some of the tastiest cue' in the city. Consider popping into Smoke Ring if you want to watch the game practically next door to the stadium, while at the same time munching on some fried pickles, local beers and brisket so tender it will make you forget there is a game on in the first place.
Smoke Ring BBQ is at 309 Nelson St. SW. Connect with the restaurant on Facebook, Twitter and Instagram. 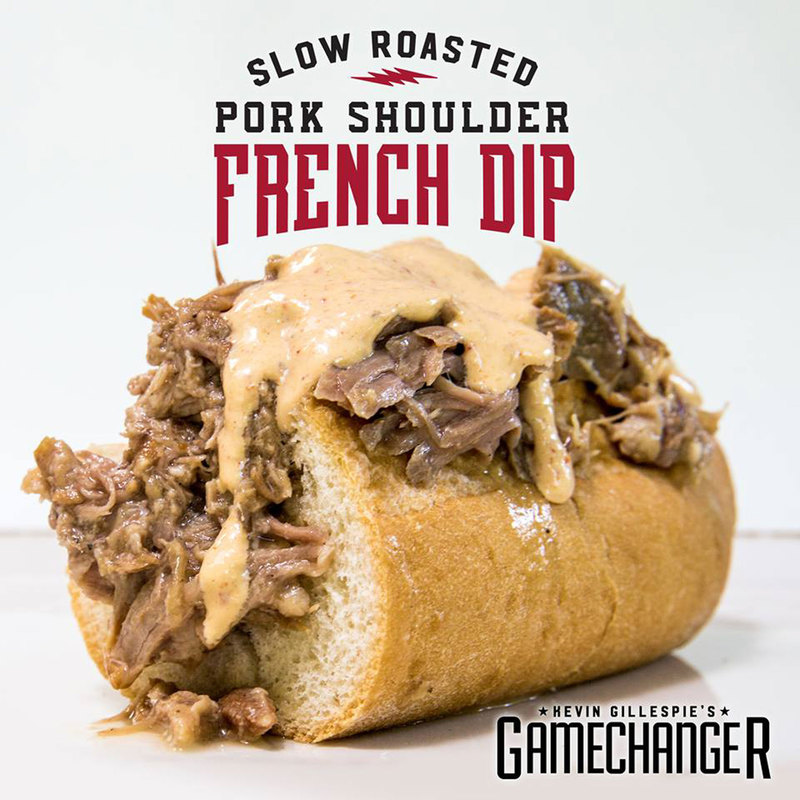 Mercedes-Benz Stadium
While other sports stadiums are known for selling unremarkable concession stand food at exorbitant prices, Mercedes-Benz Stadium has made headlines for both its incredible food offerings and for keeping prices low. If you're lucky enough to actually have tickets to the game, don't work about trying to grab some food before you head to the arena. Once inside, you're be able to feast on sausages from Delia's Chicken Sausage Stand (Pro-tip: When they ask if you want to add chili, always say yes), Farm Burger, Fox Bros BBQ, and Gamechanger, a concept by celebrated Southern chef Kevin Gillespie.
Mercedes-Benz Stadium is at 1 AMB Dr. NW. Connect with the stadium on Facebook, Twitter and Instagram.