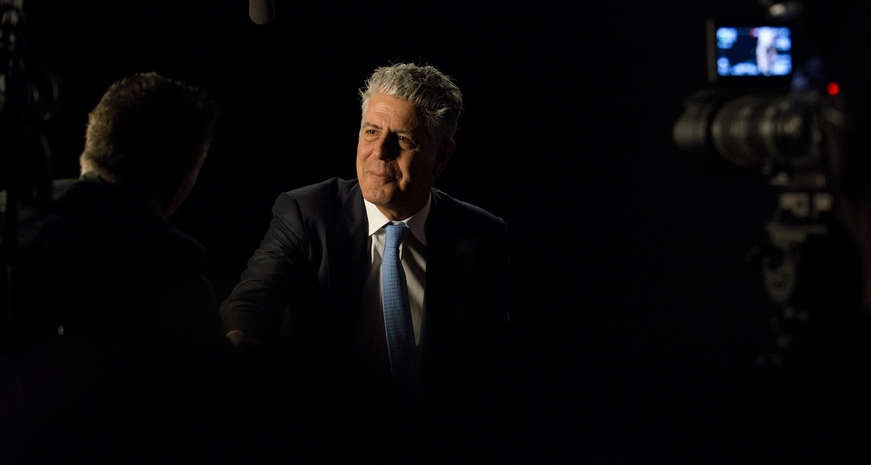 The world learned today that superstar chef, author and TV personality Anthony Bourdain died today at the age of 61, of an apparent suicide. And although he was a true New Yorker through and through, he was loved far and wide, including here in the South. As we remember him and celebrate his amazing career and legacy, our staff shared thoughts on his passing, and consider what Bourdain meant to world culture and culinary arts.

Kate Williams
My memory of my first reading of Kitchen Confidential was not — in any way — positive. Who was this dude, I remember thinking, glamorizing macho kitchen b.s. and portraying culinary work as only the provenance of hard-scrabble punk rockers — those who could stay up for days on drug-fueled binges and you just knew spit on your steak if you wanted it cooked medium? At the time it seemed to me there was no room for someone more like myself in his world.

I went to go look for my copy of his book today to look back and see if I really am remembering it right, if I really would feel the same way about the book now, after his years of brilliantly chronicling the foods, personalities, and lives of peoples around the globe; after so many hours of mine spent glued to the television as he ate his way through Harlem, through Waffle House, through Iran, through Laos; after learning from him an example of what truly compassionate culinary journalism can be.

I couldn’t find either of my copies. They must have lost their way on my last move across the country. Somehow this realization is just as crushing as scrolling through Twitter today. Anthony Bourdain opened up a world to me, a world that included things I never wanted to see but needed to anyway. For this I will always be greatful.

Chef Jeffrey Gardner
In August of 2002, I was just about to start college in Jackson, Mississippi. Thanks to charismatic chefs on TV, such as Emeril Lagasse and Graham Kerr, I was already a passionate home cook who was contemplating entering the restaurant world. Thumbing through a copy of Anthony Bourdain's Kitchen Confidential at my closest Borders (remember those?), I was enthralled with the brutal honesty with how he described his experiences in the restaurant industry. Gone was the enthusiasm and pleasant demeanor of the chefs I had seen on TV. Here was someone acerbic, almost sinister in the way he regaled of his days on "the pirate ship." Bourdain was a culinary raconteur in the spirit of William S. Burroughs or Hunter S. Thompson: I pored over every page as he opened my eyes to many of the realities of the restaurant world.

Ever the iconoclast, he grabbed my attention as he dropped a steaming literary deuce on how the world of food had been previously portrayed. From boorish owners to Bobby Flay, no one was safe from Bourdain's scorn. He also expanded my awareness of great chefs in the United States. The reverence with which he spoke of such culinary luminaries as Eric Ripert, David Bouley and the late Jean-Louis Palladin brought me a whole new sense of appreciation for chefs who may not have had their own TV show, but were far more important in shaping America's fine dining landscape. In later memoirs, he would do the same for chefs like Masa Takayama, Fergus Henderson, Gabrielle Hamilton and Ferran Adria. Toward the end of the book, he penned the chapter "So You Wanna Be a Chef?" where he preached the importance of hard work, integrity, perseverance without complaining, and (later) how it's NEVER acceptable to listen to Billy Joel or the Grateful Dead in a professional kitchen. After finishing the chapter, I knew that this was the industry for me. Emeril made me want to cook at home; Bourdain pushed me into the restaurant business. Without him, I likely wouldn't have the career I do now.

Bourdain's TV series, No Reservations, was also hugely influential for me. To see someone who truly immersed himself in other countries and cultures, taking part in everything from a camel roast in the Sahara to a series of comically futile fishing expeditions made me yearn to see the world beyond simply tourist hot-spots. I've adopted his edict of never eating in the hotels as my own, and always strive to find what the locals are eating above all else. My love of offal likely started by following his advice to "eat everything, regardless of how scary it may seem." His show wasn't just a look at where to visit in a foreign country: it was a window into a culture and her people. He asked earnest questions and was never the "ugly American." As a chef, it's easy to become myopic and think that our careers cannot extend beyond our restaurants. However, one viewing of the Parts Unknown episode where Bourdain slurps down bun cha in Vietnam with President Obama dispels that.

Even something as simple as his Twitter presence was a refreshing voice in the echo chamber of social media. I would hope that his legions of chef disciples took notice at his concrete stance on sexual harassment and the #MeToo movement. It would have been easy for Bourdain to remain neutral or conflicted due to his personal friendships with disgraced chefs John Besh and Mario Batali. Instead, he was one of the loudest voices in our industry to speak out against such disgusting behavior and call for change in the widespread "meathead" culture of male-dominated kitchens. He even bore some of the responsibility himself, regretting that he wrote so romantically about unacceptable behavior in the restaurant business.

Sean Pruett
I think he was one of the first chefs I saw on TV that actually showed a somewhat real picture of a chef, not the "made for suburbia chef."  It created an appreciation of the operations and details of a kitchen that I still enjoy. (I love sitting at a bar or open kitchen and watching the basic "assembly line operations" that make a restaurant work.) Unfortunately, it seems like people wanted to boil him down to nothing else than his 1980s persona and didn't want to hear the story of his personal growth and change.

Rachel Taylor
Growing up I loved flipping between the Food Network and Travel Channel. Of all the programs I watched, whenever Anthony Bourdain came on screen, he captured my attention unlike other hosts. He was focused on the food, but more importantly telling the story of the people and culture behind the food. He was an incredible storyteller who opened my mind to the idea that food connects all of us and touches every part of the world, and to understand people around the world the best place to start is by trying their food.

I’ve always loved to travel and explore new places, but never thought I could make a career out of it. Bourdain’s own career has influenced how I look at my career as a food writer/journalist, and all of the possibilities and different paths it can take. I’m inspired to tell the stories of people and food, whether it’s in a small town in Alabama or a bustling city like Paris, and without Bourdain’s influence I don’t know if that would have been possible. I’ll always live by this advice from him: “If I'm an advocate for anything, it's to move. As far as you can, as much as you can. Across the ocean, or simply across the river. The extent to which you can walk in someone else's shoes or at least eat their food, it's a plus for everybody. Open your mind, get up off the couch, move.”

Amanda Pharis
I had to give myself time this morning after hearing about Bourdain. I don't usually have much attachment to celebrities, but I consider Anthony Bourdain one of the few creative inspirations that moved me into what I do now, which is ultimately storytelling. I'm not a good cook and I wouldn't say he inspired me to cook, but he did fuel curiosity about place, and how important place is — mostly how important the people and stories are to place. The food was just the medium to move and share ideas about culture, and he did it so honestly and beautifully. I hope he has some peace now, and I hope he knew what an impact he made on so many chefs and artists.

Mike Jordan
It almost became cliché to praise Anthony Bourdain’s world-traveling, publicly shared culinary curiosity. He was the person who seemed so familiar yet so rare in modern times — someone who had not only top-notch talent but brilliant perspective, poignant observations and an easygoing approachability. He was the visitor we all wanted to welcome into our own kitchens and feed, knowing he would appreciate the meal. In an era of the celebrity chef competition, where judges find ways to diminish a dish’s worth for reasons that so often fly over the heads of viewers, Bourdan walked, talked, drank, cursed and ate his way into everyone’s heart, always appealing to our internal sense of community and humanity.

The apparent suicide makes it all the more tragic, as Bourdain was so universally loved. Having lost a close cousin to suicide when I was younger, I know that it’s never easy to understand when someone takes his or her own life. In Bourdain’s case, I prefer not to speculate on how he came to the decision, but the sudden announcement does make me more concerned with something I’ve thought a lot about since I’ve begun writing about food and how it relates to other forms of culture. Talented people may share their talents and love what they do, but they are sometimes burdened with things they don’t share with the rest of us. Like all great artists, chefs are human.

Losing Anthony Bourdain has no upside, but if it helps remind us to celebrate those we love, at least his death won’t be in vain. You don’t have to be a world-famous chef to be worthy of life, and though his talent was so incredibly great, his greatest value was in his humanity. He seemed both aware and unaffected by his success and fame. Without knowing what roles if any they played in how he left us, what is known is that he left us far better than we were before he found his true calling and made all of us better people through the healing power of breaking bread with our neighbors, near and far. May he rest in peace; no matter where he goes from here I’m sure he’ll have one of the best seats in the house — no reservations required.