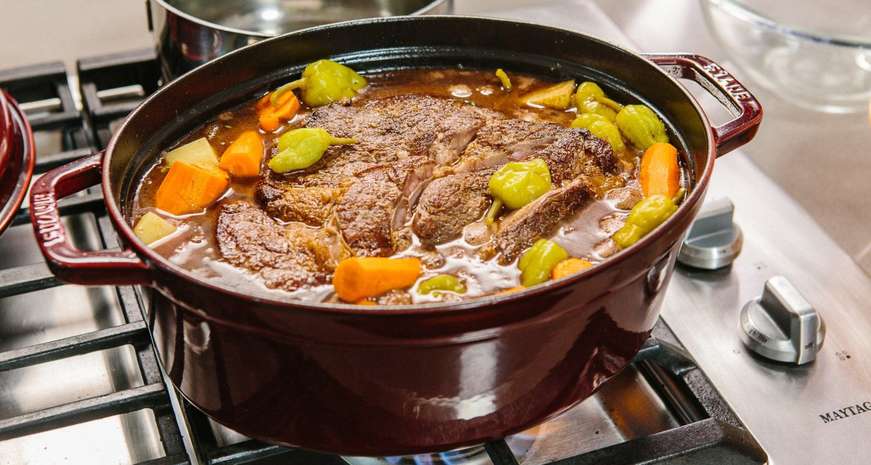 Fast-forward back to early 2016. No, we're not looking to fantasize about a different political era, but rather a time when seemingly the entire food blogosphere was obsessed with one particular dish — the Mississippi Roast. What began as a simple recipe exchange between friends took on a life of its own as a simple pot roast with peppers took over the internet.

Were you sleeping under a rock back then? Or just distracted by, I don't know, one of the other millions of news items of the day? If you don't know what the heck we're talking about when we say Mississippi Roast, here's the short and sweet of it:

Back in the early aughts, so the story goes, Ripley, Mississippi resident Robin Chapman started cooking a riff on a slow cooker pot roast recipe made using a simple combination of chuck roast, dry ranch dressing mix, dry au jus gravy, butter and pepperoncini peppers. She shared the recipe with a friend, who subsequently contributed it to a church cookbook, where congregant Judy Ward found the recipe. Ward prepared the roast for a niece, Laurie Ormon, who later published the recipe on her blog, Laurie's Life. Another blogger found the recipe and republished it, giving it its now-famous name, Mississippi Roast, and, from that point on, the recipe took on a life of its own, getting shared across blogs and, importantly Pinterest, until it even began to attract the attention of the likes of The New York Times and Taste of Home.

Different versions, most more elaborate than the original, abound, some prepared sans-slow cooker with DIY ranch mix and others using a mash-up of techniques.

Our Southern Kitchen recipe for Mississippi Roast is one-such mash-up. We've kept the mix, but swapped in onion soup mix for ranch, and we've added in the pepperoncini brine along with the peppers for an extra pop of acidity. To make our braise a one-pot dinner, we've also added in traditional vegetables — onions, carrots and potatoes — to the pot. And we've moved the dish from the slow cooker to the stove and oven, employing our trusty Dutch oven to help us develop additional depth of flavor by searing the roast and deglazing the pan.

However you choose to make it, Mississippi Roast has become, in a few short years, an undeniable part of our Southern culinary culture.

Instructions
Heat the oven to 275 degrees. Use kitchen twine to tie together the bay leaves, rosemary and thyme.

Heat a large Dutch oven over high heat. While the pot is heating, liberally season the roast with salt and pepper.

Add the oil to the hot pot, then add the roast. Sear on all sides until meat is completely browned, 4 to 5 minutes per side. Transfer to a plate and reduce the heat to medium.

Add the onion and cook, stirring constantly, until softened, about 3 minutes. Add the garlic, onion soup mix and the bundled herbs, and cook until fragrant, about 1 minute.

Bring the cooking liquid to a simmer, then cover the pot and transfer to the oven. Braise in the oven until the roast is completely tender, about 8 hours. Thicken the sauce, if desired (see note). Serve the roast with the vegetables and pot juices.

The definitive guide to braising any and everything

This Mississippi-only drive-in is perfect for modern times

The definitive guide to braising any and everything

This Mississippi-only drive-in is perfect for modern times