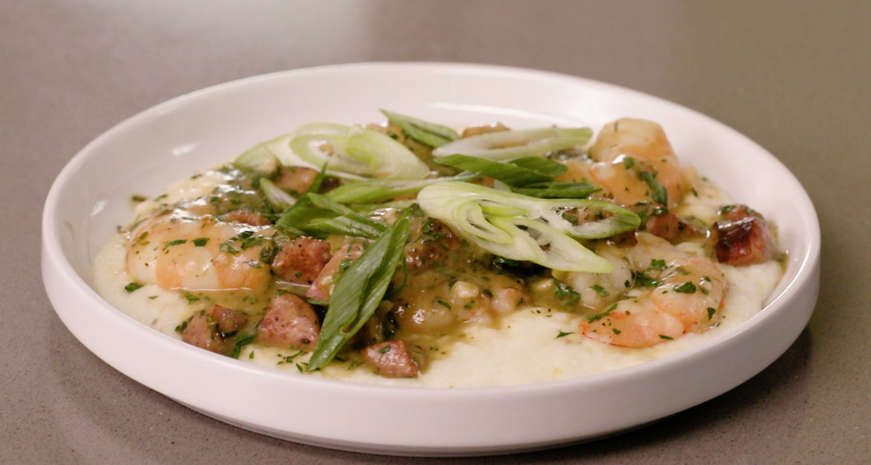 A bowl of savory shrimp and grits

Pairing Southern staples: What kinds of wine pair best with shrimp and grits?

With humble origins featuring fish like whiting and croaker, shrimp and grits has become one of the quintessential staples of Southern cuisine. Fortunately, pretty much all possible variations offer flavors that pair well with different styles of wine.

Since they're cooked all over the South, the shrimp and the grits parts of the recipe remain the only constants, as preparations can range from a simple sauté of rendered bacon and a garnish of scallions, to a robust gravy of tomato and sausage. Depending on your personal shrimp and grits preference (or what may be on the menu of your favorite Southern restaurant), we’ve probably got you covered with a few delicious suggestions.

The “Anti-Sauce” – Full-Bodied Whites
Before restaurant chefs started putting their own stamp on the dish, shrimp and grits started off very simply. You had rendered bacon and its drippings, shrimp, maybe a little garlic, and some sliced green onions. No formal sauce was part of the dish.

If you prefer your shrimp and grits in this manner, look for a full-bodied white wine such as a New World chardonnay. Pairing a dish that includes cream — like grits — with a wine that has some weight will bring out the wine’s subtleties. Chardonnay is a particularly fine choice with this version of shrimp and grits, because spicy and acidic foods typically pair poorly with chardonnay. Whereas buttery dishes, with minimal spice, just beg to be paired with chardonnay. Another option would be viognier. Similar in body to chardonnay, Viognier typically works better with spice-forward foods; however, the umami notes from the bacon are a match made in heaven for the bright, citrusy wine.

Tomato-based Sauces – Sparkling Rosé or Acidic Reds
Sauces that have a dominant tomato flavor can provide a wonderful contrast to the typical richness of shrimp and grits; however, this significantly alters which wines will best suit the dish. Greater acidity in the sauce necessitates a wine with the same qualities.

Don’t be afraid of too much acid: the acid in the tomatoes softens the acid in the wine, making the wine taste fruitier. In this instance, a rosé — specifically a sparkling rosé — dances beautifully with the tomatoes and also acts as a foil for the creamy grits. If you only drink one of these wines with shrimp and grits, make it the rosé, since it’s one of the most versatile and food-friendly wines you can find.

While an acidic white wine would always be appropriate with tomatoes, some medium-bodied, low-tannin wines, such as barbera or chianti, work wonderfully with cooked tomatoes. Typically considered a tier below the more exalted nebbiolo, a high-quality barbera can be found at a bargain, as it’s meant to be consumed while the wine is still young.

Chianti or other wines made from sangiovese grapes are good alternatives if you can’t find barbera. Think of the wicker-braced chianti bottles on the tables at an Italian red sauce joint: The reason that image is so iconic is that the acidic tomato sauce draws out the fruitiness of the young red wine. 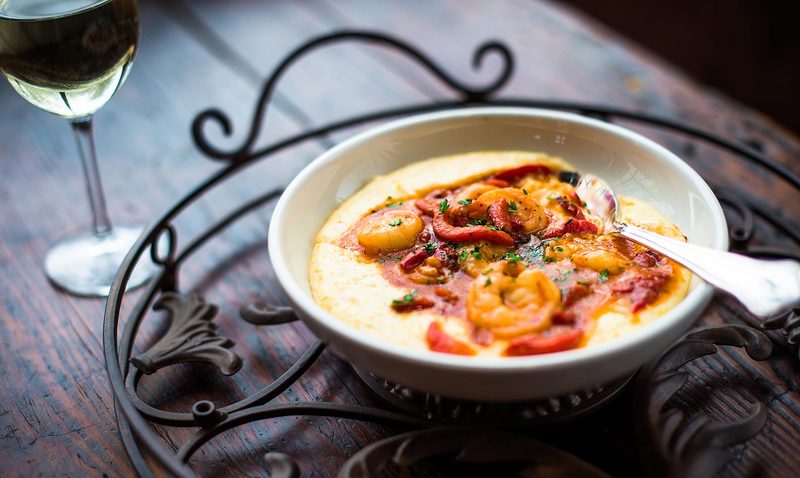 Sausage and Herb-Based—Pinot Gris, New World Pinot Noir
As shrimp and grits has evolved through the years, smoked sausage has become one of its most commonly associated ingredients. Beyond the humble bacon drippings, most varieties of shrimp and grits now boast a strong supporting cast of kielbasa or andouille sausage in a light, aromatic gravy.

Your main two pairing options play off the salt and smoke brought on by the sausage. If you’re in a lighter kind of mood, a snappy pinot gris brings notes of citrus and stone fruit, plus a weightier mouthfeel that harmonizes well with smoky sausage. While Alsace is the king of pinot gris production, the cooler climates of the Pacific Northwest yield fantastic wines at great value.

Don’t be thrown off by the shrimp in the dish: This particular shrimp and grits preparation practically demands to be paired with red wine. A younger red, with low to medium tannins (i.e. save your bold cabernet sauvignon for another occasion) really benefits from the salinity of the sauce. Look for a more fruit-forward, New World pinot noir to satisfy those needs. Wines with low tannins avoid the risk of being overwhelmed by the presence of spice in a dish, so something like an Oregon pinot noir is the perfect choice.