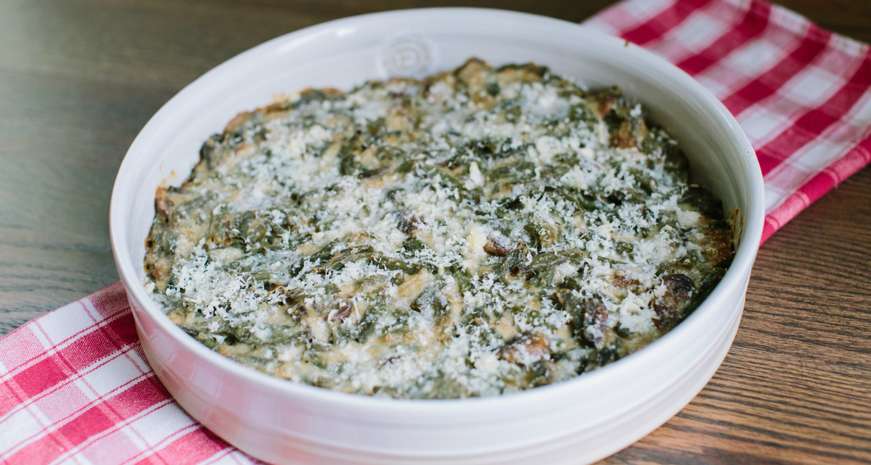 Our winning holiday side dish takes green bean casserole to the next level with a homemade mushroom sauce and freshly blanched green beans. Make this once and you'll never want to open a can of Campbell's again.

Green bean casserole is a must-have Thanksgiving side dish for many of us at Southern Kitchen, so when we received this totally-from-scratch version from Southern Kitchen reader Michele Barret, we knew we'd have to try it.

Made with a classic combination of mushrooms, green beans and a hefty shake of celery salt, Barret's casserole evokes those made entirely with canned products, but in the best way possible. There's no sluggish muddiness from canned beans or slimy slivers of mushrooms; instead, each bite is complex, creamy and actually tastes like vegetables.

The secret is in the sauce, which is made with butter, shallots, garlic and equal parts chicken broth and half and half, all thickened up with flour. It's rich, for sure, but you'll still have room for pie once you've had a serving or two.

Really, the only thing we found missing in Barret's recipe was a crisp, crunchy topping. Some like breadcrumbs, others, fried onions, but those of us in the test kitchen reached for a tub of freshly ground Parmesan to finish the dish. Half an hour later and we were ready to scarf this casserole down — which we did in less than 10 minutes.

Mom's Homemade Green Bean Casserole
The only change we made to the recipe was to add a sprinkling of Parmesan cheese over the top of the casserole before baking. We liked the nice browned crust it formed over the green beans. You could certainly also top the casserole with fried onions or bread crumbs if you’d like.

Instructions
Heat the oven to 375 degrees. Butter a 9- by 13-inch baking dish.

Bring a large pot of salted water to a boil. Prepare an ice bath in a large bowl.

Place the green beans in the boiling water and cook until just crisp-tender, 3 to 5 minutes. Immediately use a spider or slotted spoon to transfer to the ice bath. Let cool completely and drain well.

In a large skillet, melt the butter over medium heat. When the butter is foamy, add the mushrooms and shallot and cook, stirring frequently, until soft, about 15 minutes. Add the garlic and continue to cook, stirring, until fragrant, about 30 seconds. Season with salt and pepper.

Stir in the flour to coat the vegetables. While stirring constantly, pour in the chicken broth, followed by the half and half and the celery salt. Bring to a simmer and cook, stirring occasionally, until thickened, 3 to 5 minutes. Season to taste with salt and pepper. Add the green beans and stir to coat thoroughly in the sauce.

Transfer the entire contents of the skillet to the prepared baking dish. Top with Parmesan cheese, if using. Bake until hot and bubbly, 30 to 35 minutes. Let cool for 5 minutes and serve.

Fill your party table with these 3 never-fail appetizers

Fill your party table with these 3 never-fail appetizers