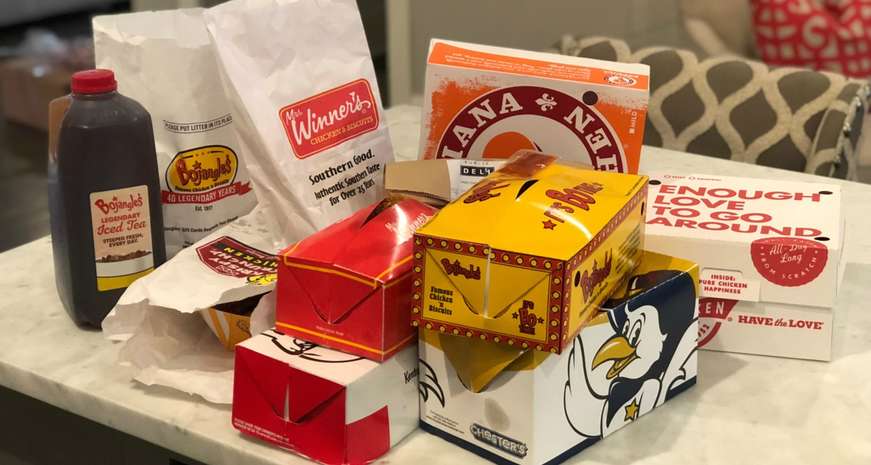 Here in the South, we live in a fast food fried chicken promised land. There's hardly a freeway exit where there aren't at least two different drive-thrus specializing in deep-fried poultry, and you'd be hard-pressed to find a gas station these days that isn't stocked in the stuff.

But is it all worth eating? When faced with a choice between Kentucky Fried Chicken, Popeye's and Mrs. Winner's, which should you choose? Which chicken is actually the crispiest? These are tough questions, so we set out to do the hard work for you by tasting every single variety of fast food fried chicken we could get our hands on.

Before we get to the results, a few notes on chicken tasting procedure. We decided to buy chicken only from restaurants that sell bone-in fried chicken pieces. (Sorry, Chick-Fil-A.) We included classic drive-thru chains, such as Popeye's, in addition to small franchises, like Gus's, gas station vendors, like Krispy Krunchy Chicken, and ready-made grocery store chicken, such as Publix. If it can be picked up in a matter of minutes, it counts.

All of the chicken was purchased within 12 hours of tasting, and all of the chicken was tasted at room temperature  — it is our firm belief that great fried chicken should be just as good at room temperature as it is straight from the fryer. (Plus, we didn't want to give the last chain from which we purchased chicken an unfair advantage.) We tasted each chicken blind, and ranked them on a scale of 1 to 5 in four categories: crispiness, juiciness, chicken flavor, and crust-skin adherence. We then tallied up all the numbers from each of the six tasters, for a highest possible score of 120.

The results, in order from worst to best, below. 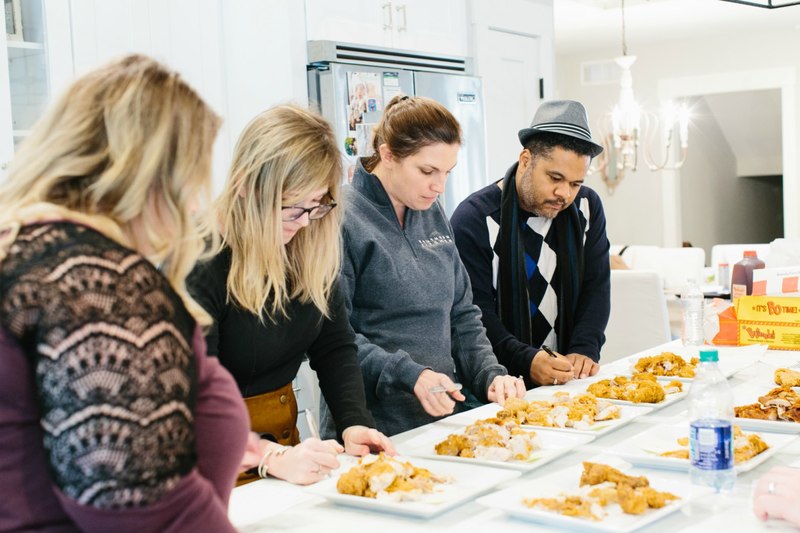 Bottom of the bucket: Kentucky Fried Chicken
Sorry, Colonel, your chicken needs some work. No one likes this mushy-battered chicken. "This had the look but not the skill or ability. Imposter! More batter than better," one taster wrote. Another called it simply "BAD!!" while one astute taster was more specific: "Weird chemical flavor on chicken. Crust was mushy and unpleasant. Overall, "it's a very sad looking plate of fried chicken."
Score
Crispiness: 12  Juiciness: 14  Chicken Flavor: 11  Crust Adherence: 13  Total: 50

Not great: Chester's Chicken
Coming in much better than KFC, but still not great, is Chester's, which is typically found in Love's Travel Stations. The overwelming impression was that the chicken was "dry ... blegh. Where's the dump bucket?" Another taster said it looked "fried within an inch of its life. Makes me sad — lilke staring into the abyss." The last word? "Sad and shady. Don't trust it."
Score
Crispiness: 19  Juiciness: 13  Chicken Flavor: 13  Crust Adherence: 21  Total: 66 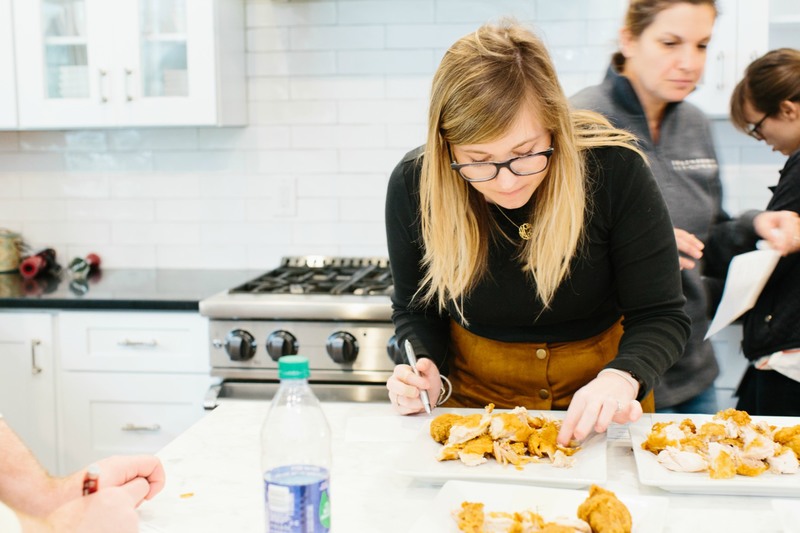 Middle of the pack: Bojangle's and Church's
Classic fast food eateries Bojangle's and Church's tied for mediocrity with 60 points each, with Church's besting Bo's in the crispiness category and Bojangle's doing far better with flavor. Tasters said that Bojangle's chicken was "dry and tastes leftover but has good strong poultry flavor" and "overcooked [but had a] good blend of spices in crust." Church's, on the other hand, was called a "hand washer for sure" and "nothing spectacular." Multiple tasters also bemoaned its lack of seasoning, saying that it "needs sauce."
Bojangle's Score
Crispiness: 16  Juiciness: 17  Chicken Flavor: 19  Crust Adherence: 16  Total: 68
Church's Score
Crispiness: 20  Juiciness: 19  Chicken Flavor: 14  Crust Adherence: 15  Total: 68

Basic like a Pumpkin Spice Latte: Mrs. Winner's
Slightly better is the chicken from Mrs. Winner's, which was one taster's favorite of the day. Mrs. Winner's also won "best looking" because the drumstick was picture perfect. However, the rest of the team gave it a solid "meh" vote. One called it "basic like a mug," and another said its "flavor faded quickly." Another taster found it "kind of dry" while another thought it tasted "very chicken-y but greasy." In other words, you likely won't get flack for bringing this to a potluck, but you can do better.
Score
Crispiness: 20  Juiciness: 14  Chicken Flavor: 19  Crust Adherence: 16  Total: 69 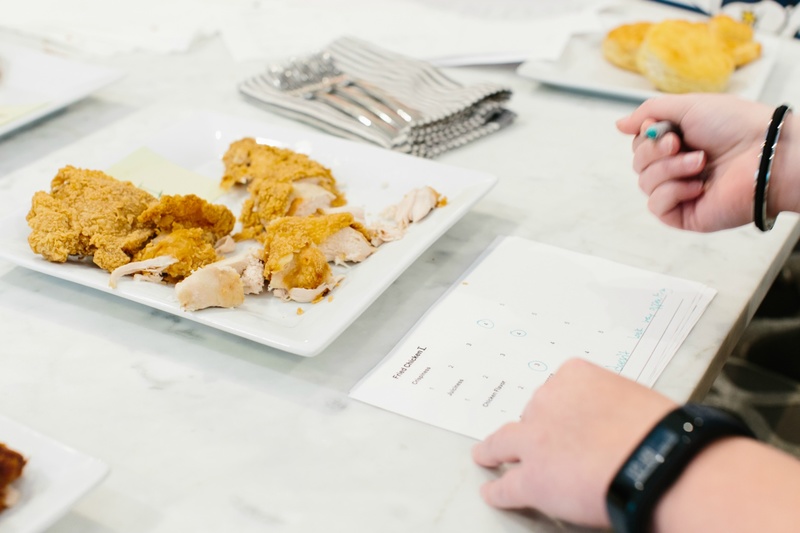 Better than you'd expect from a gas station: Krispy Krunchy Chicken
If you've got a fried chicken craving while filling your gas tank, you could do much worse than picking up a family pack of Krispy Krunchy Chicken. It was certainly not our favorite of the bunch, but it was better than we expected. Most tasters found its flavor concentrated in the breading; "not bad for a first bite," wrote one. However, another thought its flavor tasted like "fake buttermilk" but conceded that the meat was very juicy with a "nice" crust.
Score
Crispiness: 17  Juiciness: 18  Chicken Flavor: 17  Crust Adherence: 19  Total: 71 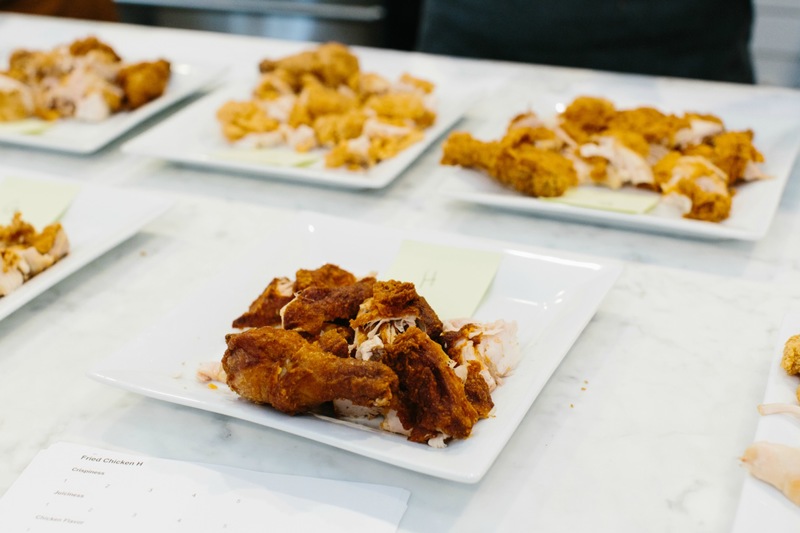 Best Small Chain: Gus's Fried Chicken
Originally from Mason, Tennessee, this small-scale fried chicken franchise has recently been making inroads in Atlanta, Texas and across the country. Before tasting the chicken, we weren't prepared for the spicy kick that even regular Gus's chicken carries — we still loved it. "Like hot chicken. Very tasty!," wrote one taster. Another said it was "darkest in appearance, yet rich in flavor." Gus's took top marks for its juiciness and its crust-skin adherence, putting it in second place overall.
Score
Crispiness: 20  Juiciness: 23  Chicken Flavor: 19  Crust Adherence: 25  Total: 87

Best Overall: Publix
Taking top marks for both crispiness and chicken flavor, and still scoring high in juiciness and crust-skin adherence, is Publix, our overall winner. Tasters liked the "hint of herbs" in the chicken and appreciated the "little kick" of spice in the crust. We liked the color and its "great crunch and overall flavor." Yes, Publix is a grocery store, not a restaurant, per se, but it still destroys the competition when it comes to deep-frying poultry. Never change, Publix chicken fryers, never change.
Score
Crispiness: 25  Juiciness: 20  Chicken Flavor: 22  Crust Adherence: 23  Total: 90