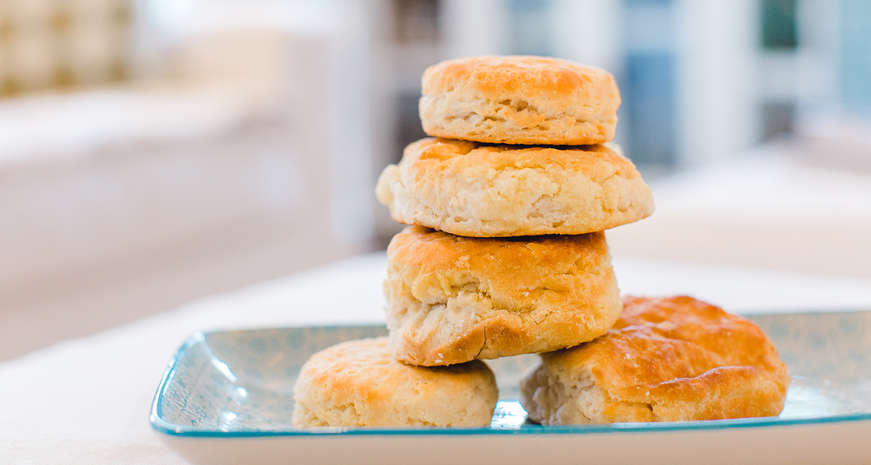 Biscuits are a doughy piece of heaven in the South. We butter them, we top them with sausage and gravy and sometimes, even make put a piece or two of fried chicken in the middle of one to make a sandwich. But let’s be honest: not everyone has time to make homemade biscuits. You don’t have to be a biscuit connoisseur to enjoy a good biscuit in the South. A number of fast food chains have added biscuits to the menu to help you save time while still enjoying this Southern food.

But which fast food chain had the best biscuit? When choosing a biscuit from Bojangles’ or Popeye’s, which should you choose? Which biscuit had the best flavor and texture? We had to know the answers, so we did the tough work for you by tasting biscuits from a variety of fast food chains in the South.

Our testing process and criteria
We wanted to see how these seven fast food biscuits stood up to our ideal biscuit — one that was flaky, flavorful, but not too salty or buttery with a moist, not gummy texture when you bite into it. Biscuits are best eaten when they are nice and warm right out of the oven. Straight from the oven wasn’t possible with this taste test, but to give the biscuits a fair chance we warmed them up in the oven right before the tasting began. Our hope was to try all seven biscuits at once, but a scheduling mishap forced us to try five biscuits one day, followed by the other two on the next day. Yes, our process wasn’t perfect, but hey, we still believe every biscuit was tasted properly during the taste test. 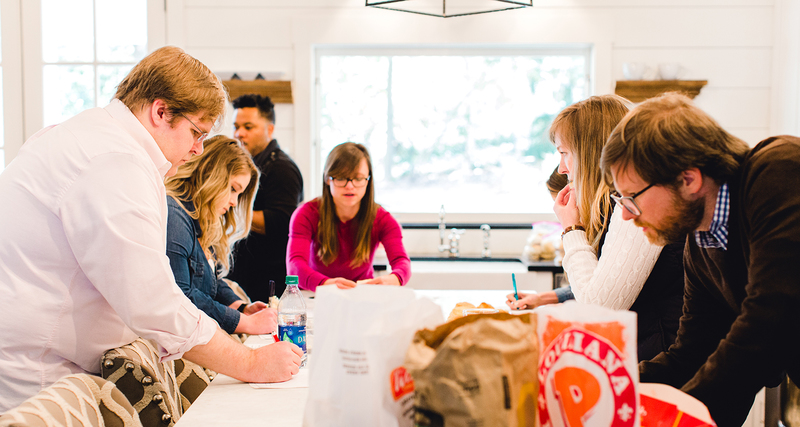 Our judges were asked to rate each biscuit on a scale of 1 to 5 on flakiness, butteryness, appearance and overall impressions of the biscuit. We tallied up the results from our seven judges and the highest possible score a biscuit could receive was 105. We had a gut feeling we knew who would come out on top, but after the first tasting finished we were surprised who had taken the lead, but more on that later.

Below are the results of our biscuit taste test, ranked from least enjoyable to our favorite. 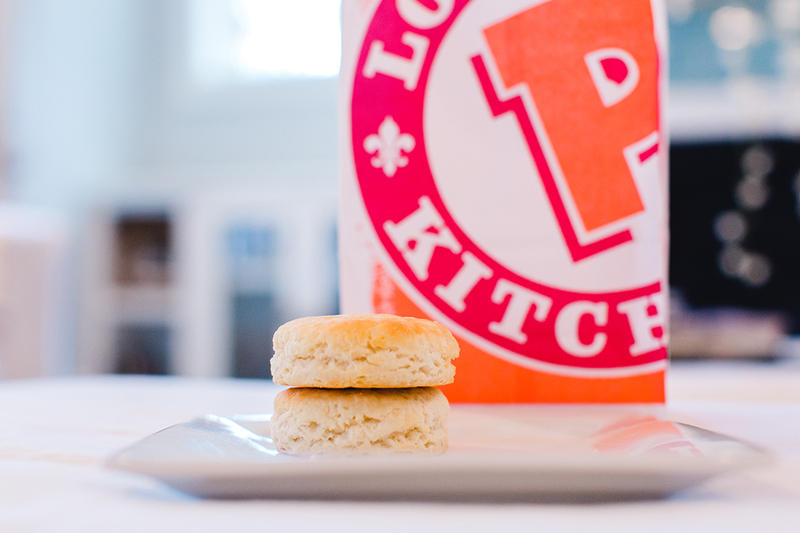 Popeye’s
The biscuits from Popeye’s are kind of sad, to be honest. One taster asked: “Why are they so flat?” Everyone was concerned for this biscuit because of its flat appearance and dry texture. “My mouth now resembles the Sahara,” one taster wrote, while another taster said: “If the middle wasn’t so dry this would win.” The biscuits were so uniform in appearance another taster commented: “They look machine made.” A touch of salt adds flavor to a biscuit, but we found salt in all of the wrong places with this one. “Lots of salt on the exterior – none in the biscuit. Blah!” a taster noted. With the bad comes the good, as one taster thoroughly enjoyed the biscuit: “That’s a damn fine biscuit,” he or she said. Overall the biscuits were “so dry, but the flavor was better than expected.” 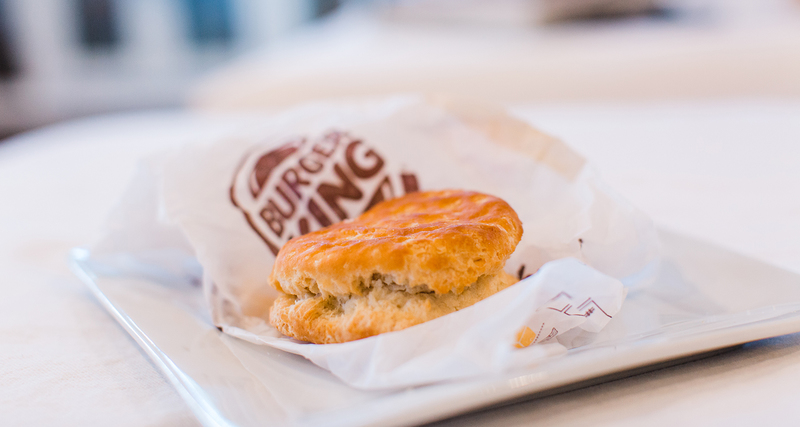 Burger King
A biscuit from Burger King is very deceiving. The biscuits appear to be flaky and have a nice golden-brown exterior indicating an even bake throughout the biscuit, but when our judges bit into them, they were disappointed. “[The biscuit] tastes like fake butter,” one taster said. The other question hanging over everyone’s mind: Why was the exterior of the biscuit so dark, but the inside underbaked? One taster said: “It’s underbaked, really gummy and flavorless except for this odd carcinogenic flavor.” The layers in the biscuit were visible and our tasters were happy to see this quality in a biscuit, however, they were thoroughly disappointed by the lack of moisture in the biscuit. “I can see the layers, but it’s not light and flaky,” one taster described. Another taster was dying of thirst after trying this biscuit: “Very dry. Need water STAT.”  Overall this biscuit was “dry like Northeast Georgia country, but strangely fluffy too.” Confusing to say the least. 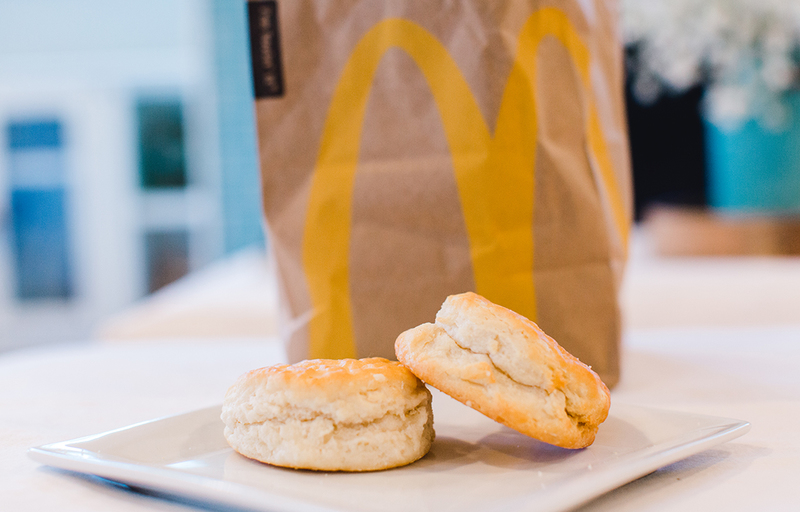 McDonald’s
McDonald’s has a good-looking biscuit. It has great golden-brown coloring and is the perfect size, resembling a homemade biscuit.  We were hoping the flavor of the biscuit would match the appearance, but our tasters were left disappointed. “Another too salty [biscuit] for me, but a pretty good-looking biscuit,” one taster commented. “The dough tastes overworked,” another taster added. Artificial butter flavors came to mind when the tasters ate this biscuit and they were put off by a tough, greasy exterior. “It seems greasy on the top, so I wouldn’t order this,” a taster said. The top of the biscuit looked bubbly and golden brown and the interior of the biscuit showed multiple layers, but “the center needs moisture,” a taster remarked. One taster pointed out this biscuit could be better with the addition of a savory topping: “If this [biscuit] was ultra-fresh, it’d be good with gravy. As is I don’t like it at all.” Overall our tasters agreed this biscuit was “acceptable, but lazy.” 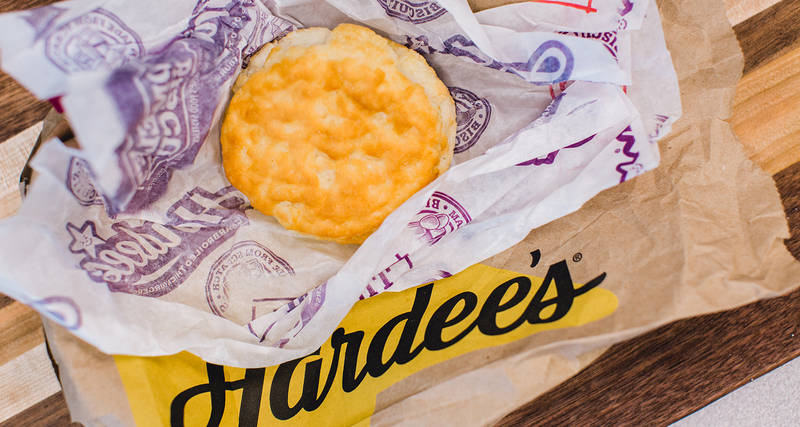 Hardee’s
Before the taste test, one taster claimed that Hardee’s had the best biscuits, but our ranking has them in fourth place for a few good reasons. There was nothing glaringly wrong with the biscuit. With a few technical changes, it could be a pretty decent biscuit. The tasters came up with an almost flavorless profile that was bland, lacked butter and salt. “It has good flavor, but nothing to write home about,” one taster said. Even with the appearance of layers, the texture was more crumbly and gummy than flaky and as one taster pointed out: “It has an almost cakey interior.” The biscuit’s exterior was very dark and bubbly, not smooth. Our tasters thought it was a “nice looking top” for a biscuit. The overall impression of a Hardee’s biscuit is you can’t eat it alone. “It begs for sausage or grape jelly,” one taster said. Another taster said: “It would be a good sandwich biscuit though.” As is the biscuit is lacking something for us to want to eat it on its own. “I want to like this biscuit more than I do,” A taster said. 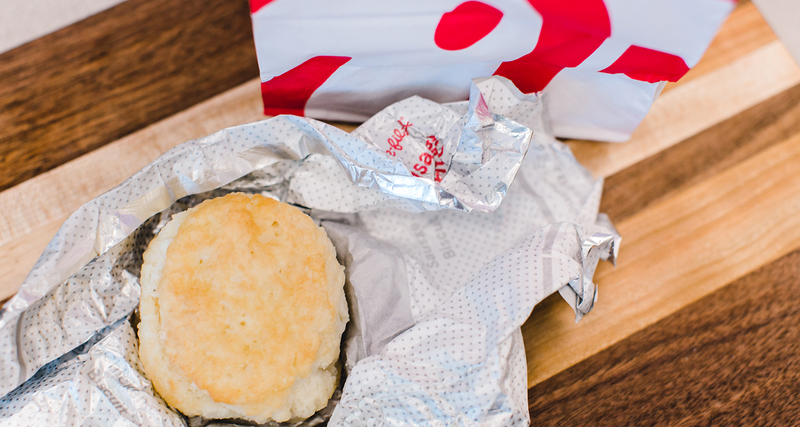 Chick-fil-A
Our tasters tried biscuits from Chick-fil-A on the second day of tasting. We found the biscuits, which came buttered, to be too buttery, not surprisingly. The butter flavor overtook the biscuits. They were moist, slightly dense, and sweet. One taster said: “Sweeter than most biscuits, but still savory due to the butter.” As for appearance, the exterior of the biscuits was pretty and lighter than the other biscuits we tried, but still had a nice golden color. This biscuit lacked flakiness and the texture of the biscuit was crumblier than we liked. “It falls apart very easily, which is kind of annoying,” one taster said. Another taster said: “[I] liked the texture even though it wasn’t super fancy.”

Upon our second round of tasting up against Bojangles’,  Chick-fil-A dropped in our rankings to third place. This time around our tasters felt the butter was overwhelming the flavor profile of the actual biscuit. Tasters found the texture to still be crumbly, but “doesn’t completely fall apart” like the first round of biscuits did. Overall Chick-fil-A biscuits are “a little too buttery and too flaky – it falls apart a bit, but is very fluffy. If you like butter you’ll like this biscuit.” 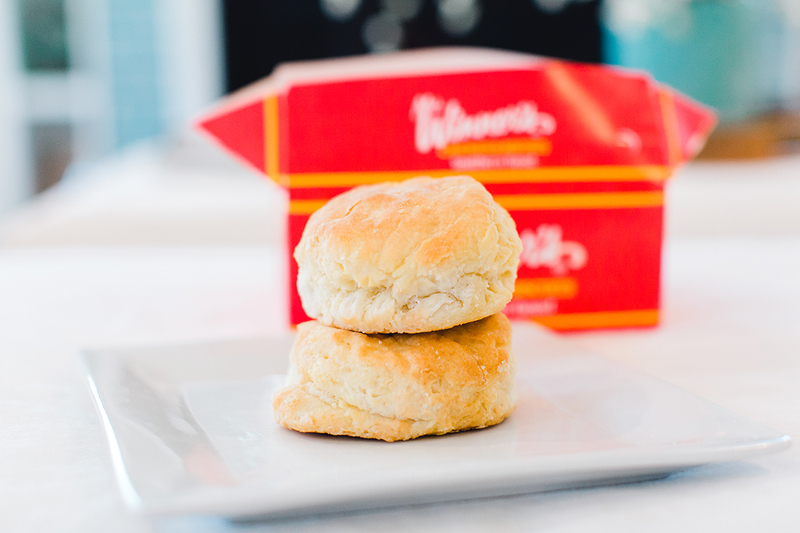 Mrs. Winner’s
After tasting biscuits from Mrs. Winner’s, our tasters were pleased by their appearance and taste. “[The biscuits] looked appetizing,” one taster remarked. And even though their appearance wasn’t uniform, they still looked like a great batch of biscuits. One taster said: “[They’re] inconsistently colored, but they’re all pretty.” The taste wasn’t spectacular, but our tasters were surprised by the unexpected fluffy center. “I think these are attractive and very fluffy, which I love,” one taster said. One taster thought the biscuits took on a gummy quality, instead of a fluffy texture. “Very gummy sensation when eating it,” he or she remarked. Another taster was happy to taste “good actual butter flavor,” instead of the artificial flavors other biscuits had presented.  Not everyone was happy with the texture of the biscuit. “It’s dry and crumbly, reminiscent of buttered cat litter,” one taster said. Another taster said the biscuit “left my mouth a little dry.” Overall these biscuits were “not the best, not the worst.” 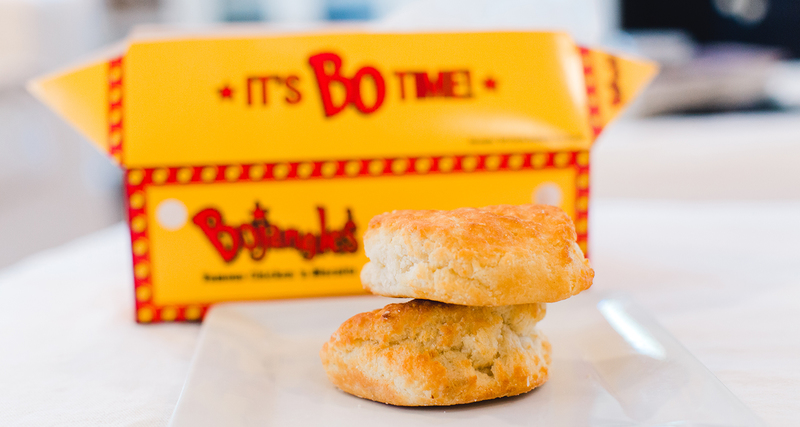 The Winner: Bojangles’*
During the first round of tasting, Bojangles’ biscuits found themselves in second place. Our tasters loved the slightly salty, buttery flavor profile of the biscuits and their appearance. “I think these are the prettiest with a golden top and nice ombre coloring,” one taster said. Another taster described it having a “nice buttery smell that left me licking my lips.” The top of the biscuit was a little salty and our tasters had mixed feelings about it. One taster said “[It] was salty on top and I like it.” While another said “[It] could use more flavor- kind of tastes like a saltine cracker.” One lone taster really did not like this biscuit saying it had a “plasticy flavor that kind of tastes like chlorine.”

After taking a bite into the biscuits, the tasters were also impressed with their texture. “Tender — nice chew to the biscuit,” one taster noted. Our ideal flaky, fluffy texture profile was also present in this biscuit. “[They’re} so fluffy, not dense at all,” a taster said. One taster suggested the biscuits would be better used for sandwiches. “Not enjoyable, but could be good for sandwiches,” he or she said.

During the second round of tasting, Bojangles’ was clearly the preferred biscuit. “PERFECT!” one taster remarked. Another said “[It’s] the best of the bunch.” The appearance of the biscuits was dark golden brown that “looks burned, but is not.” The crunchy exterior and moist inside make up the perfect formula for a biscuit. “Fluffy and tender with good saltiness on the surface,” one taster said. Another taster described it having a “crunchy top and just salty enough. Very fluffy – the perfect biscuit.” Overall this biscuit has just “the right amount of butter” and was the “prettiest biscuit of them all.”

*Editor's Note: Bojangles is the official sponsor of Southern Kitchen's Biscuit Week, however the taste test was conducted blind, and before a sponsorship deal was closed. All opinions and results are completely unbiased and based on editorial judgement. Bojangles just makes a darn fine biscuit, y'all.

It's biscuit week, y'all!

It's biscuit week, y'all!