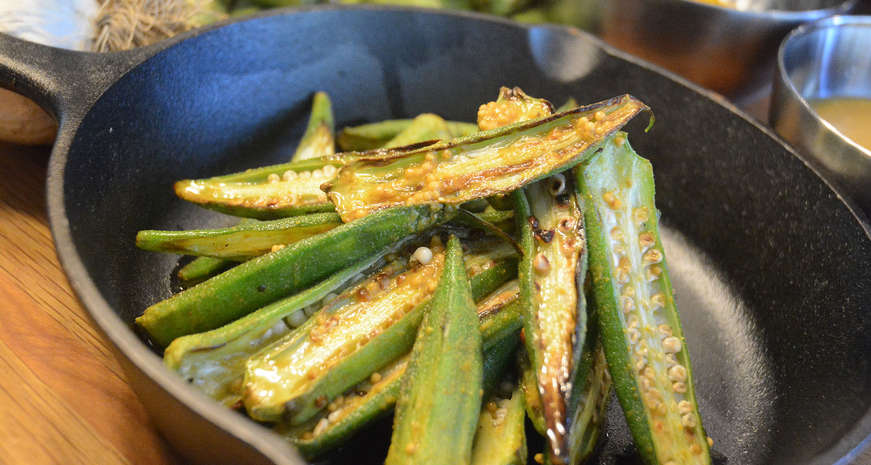 Okra’s ancient origins are rooted in southern Ethiopia, where it then traveled west to Europe via mass migrations and east to Asia due to the spread of Islam. Okra began digging its roots into gardens and food cultures throughout the world thousands of years ago, well before making its trip across the Middle Passage to the New World and settling comfortably into our lives here in the American South. In fact, it wasn’t until the 1700s that okra hit the scene in colonial America, most notably in the port towns of Charleston and New Orleans. Often stewed with a mixture of onions, peppers and tomatoes, or served mixed with rice in a dish called “Limpin’ Susan," okra was a dinner staple during the hot Southern summer months. 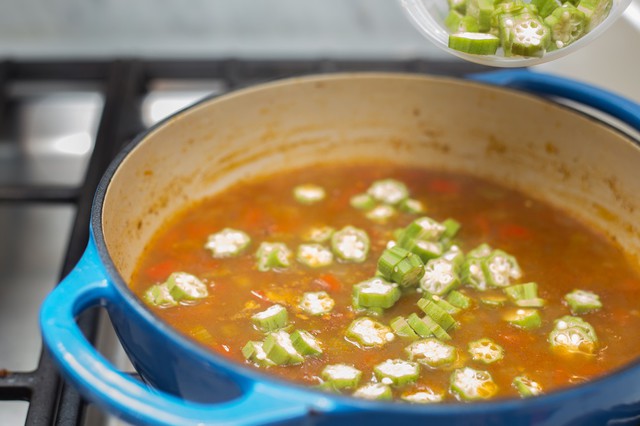 This hearty vegetable loves the southern heat that tends to scorch its garden brethren. Thanks to that famous “slimy” mucilage substance within the actual pod, okra serves as a fabulous thickener for the South's signature soups and stews like Brunswick stew, Kentucky burgoo, and of course, gumbo... although it took several generations of more affluent (French) cooks to morph a simple okra soup into the thick, spicy mixture of seafood, chicken and southern vegetable with which we’re more familiar.

In perhaps its most interesting preparation, okra's seeds were roasted, ground and brewed into a “coffee” for Confederate soldiers to stay buzzed during the Civil War, as actual coffee beans were scarce and expensive due to the blockade from the North (no, there’s no caffeine in those seeds!)

In the pleasant event of abundance, okra is easily canned, pickle and dried for later enjoyment; this preparation is how residents of southern Louisiana celebrates with gumbo even during the off-season. Celebrate okra in your own kitchen by preparing Peach Dish's Cajun-Style Chicken and Sausage Gumbo, a recipe from chef Nancie McDermont, a Southern food writer and inspirational cooking teacher (learn more about her here!)

This article was published in partnership with Peach Dish, an Atlanta-based meal delivery service dedicated to enriching and nourishing people's lives through good food experiences.