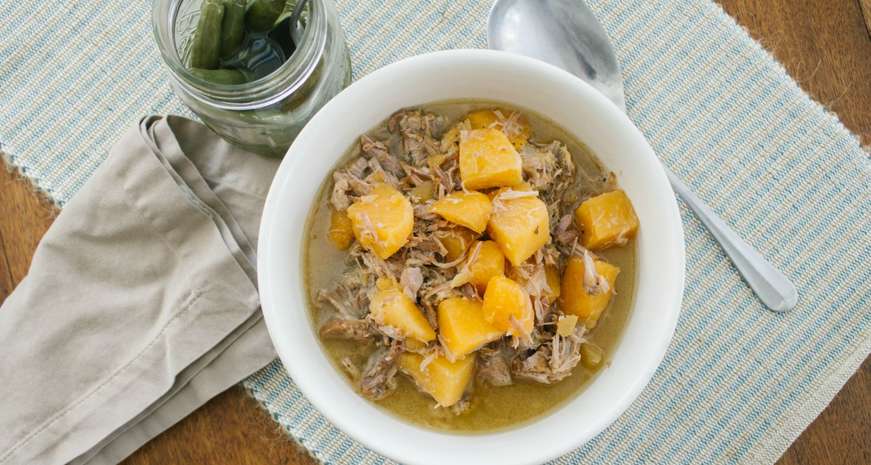 We could live off this beloved rutabaga and pork dish all winter long — really!

When she was a college student, Southern Kitchen reader Crissy Brooks used to receive some rather unique care packages. Instead of boxes of ramen noodles and cereal, her grandmother would mail her containers of stewed rutabagas.

Yes, you read that right.

These rutabagas, which Brooks calls "Nana's Rutabagas," were slow-cooked in a pile of pulled pork, sweetened up with lots of sugar and mixed with plenty of pepper vinegar for punch. At once a side dish and hearty stew, these rutabagas were a family tradition. Brooks' grandmother, Elizabeth Murray Evans, would make them for holiday dinners and "anytime we'd have a big family gathering," she said. Evans would also make big batches of rutabagas and freeze them to pull out at a moment's notice. They were so beloved that the rutabaga recipe was one of only a few that Evans had committed to memory.

Evans had a stroke at an early age. In order to preserve her recipes, Brooks sat down with Evans to walk through as many as she could remember. She was able to remember five, including this rutabaga recipe and a "Hurricane Cake" made using boxed cake mix and a few other pantry ingredients. "One thing she taught me was to always have boxed cake mix on hand, because you can make anything out of a boxed cake mix by being creative," said Brooks.

Brooks taught her now-husband to make the rutabagas when they started dating, to pass along the family recipe and, truthfully, the hard work. "Now he's the one that makes them" at holidays, she said. "They're not easy to peel and chop."

Cooking has always been important to Brooks' family, which is from the area surrounding Charleston, South Carolina. Her grandmother, who passed away in 2012, "always told me that her ability to cook so [well] came from being born with it. She said true Southern cooks are 'born with it.' The epitome of Southern entertainment and manners, my grandmother definitely wrote the book on being a good host and feeding people through their souls," she said. 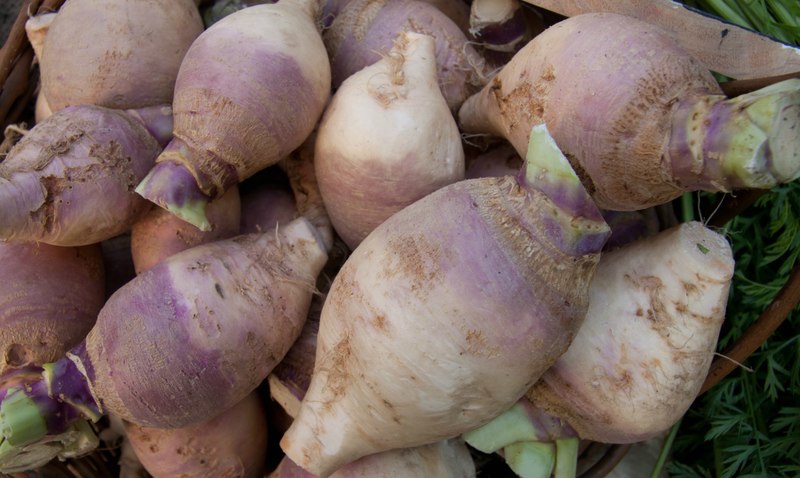 Rutabagas are more common in the South than you might assume. Hearty and robust, they can survive both the South's sweltering summers and (somewhat) chilly winters. I long associated the hefty root vegetable with New England and pot roasts, but it actually grows quite well in the coastal Carolinas. North Carolina chef Vivian Howard, in fact, dedicated an entire chapter to rutabagas in her cookbook, "Deep Run Roots".

While their first mention in written documents was in the early 19th century, it is not known when the first rutabagas arrived on North American shores. They likely made their way here from England or Ireland, where they were common, cheap and easy-to-grow vegetables, most often served mashed or in stews. Rutabagas were also used as the first jack-o'-lanterns on the British Isles, where their carved faces were said to ward off evil sprits.

In the South, rutabagas are most frequently stewed with pork products of all stripes. Some recipes call for fatback or bacon, while other, more decadent variations read like a full-on pork stew, studded with pieces of tender, orange rutabaga.

"Nana's rutabagas" fall more into the stew camp, but there are a few ways in which the recipe diverges from typical preparations. The dish starts with a boneless pork shoulder, studded with garlic cloves and seasoned aggressively with salt and pepper. The pork is seared and slow-roasted on its own until it's fork tender, then shredded. While the pork cooks, Brooks (or her husband) peels and chops four large rutabagas into generous bite-sized chunks. These get tossed into the pork pieces, along with chicken broth, salt, pepper and sugar, before being very slowly simmered overnight.

The sugar is key, according to Brooks. "We like things sweet. [Nana] would put sugar in everything, like collards and black eyed peas," she said. "We like it sweet-hot with pepper vinegar, which gives it a punch. You can eliminate sugar all together and it will taste OK. ... It's all to personal taste."

Brooks said the recipe she sent to me included a conservative amount of sugar, which I found to be just right. Rutabagas are a cross between cabbage and turnips, and therefore have a bitter, spicy flavor. Some amount of sugar is necessary to temper that bitterness and make for an enjoyable dish. That said, if you prefer your root vegetables candied and topped with marshmallows, you'll likely prefer the dish with two or three times as much sugar as is written below.

A few other notes: I made this dish with equal parts pork and rutabagas, which definitely made for a hearty entree. If you'd prefer the dish to function more as a vegetable side, drop the pork amount by half. You'll also need to make sure that the liquid level in the pot reaches the top of the pork and rutabagas; anything poking out of the liquid will not be fully cooked, even after 12 hours on the stove.

Finally, be generous with salt and vinegar. I liked a combination of both pepper vinegar and apple cider vinegar added to the dish, right before serving. 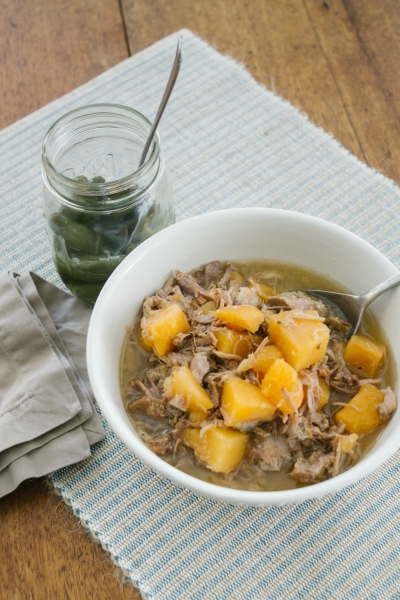 Instructions
Heat the oven to 300 degrees.

In a large Dutch oven or other large, heavy pot, heat the olive oil over medium-high heat. When the oil is shimmering, add the pork shoulder and sear until well-browned on all sides, 10 to 15 minutes. Transfer to the oven and roast until fork-tender, 3 to 4 hours. Let rest in the pot until cool enough to handle.

Use two forks to shred the pork into bite-sized pieces, leaving all drippings and cooking liquid in the pot. Add the rutabagas and sugar. Pour in enough chicken broth to come to the top of the meat and vegetables. Add water, if needed, to fill the pot. Season with salt and pepper.

Place the pot over high heat and bring the cooking liquid to a boil. Cover the pot, reduce the heat to low, and cook until the rutabaga is very tender and the sauce is fully-flavored, about 12 hours. (See note.)

After 12 hours of cooking, taste the stew and season with additional salt and sugar, if needed. Skim off any excess fat from the top of the stew. Stir in vinegars to taste, and serve hot.