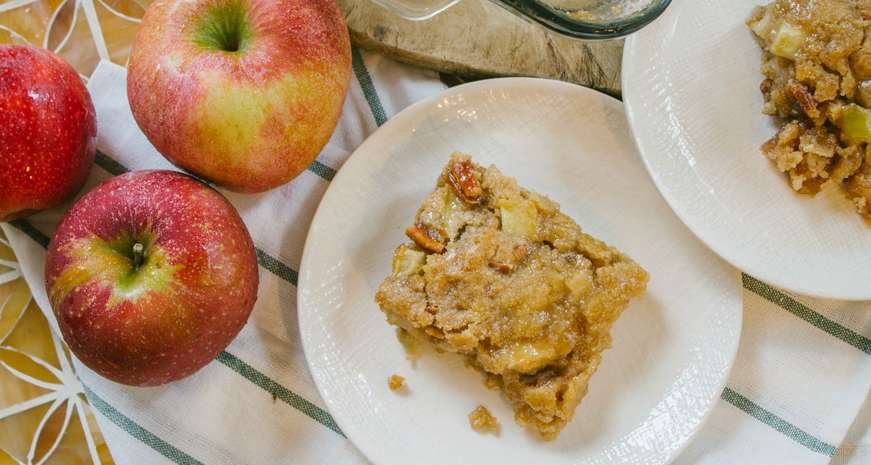 "Nama's Apple Cake" is a big slice of fall-scented comfort

My middle name is Hendry. When I was a kid, I hated it. My classmates would tease me, saying I had a "boy's name," and I thought it was weird and funny-sounding. I knew it was a family name from somewhere on my dad's side, my Southern side, but I didn't ever put names to faces until I was thirteen.

That fall marked my first visit to the Hendry family reunion on Tybee Island. We drove down to the island from Atlanta on a Saturday and arrived in time for a Savannah Shrimp Boil or Frogmore Stew, depending on who you ask. The event was at a park somewhere near where we were staying; I remember cauldrons of shrimp, potatoes and corn, hot dogs, and throwing around baseballs. I met Hendry family members I didn't know existed and avoided all of the shrimp and potatoes. (I was a picky kid.) 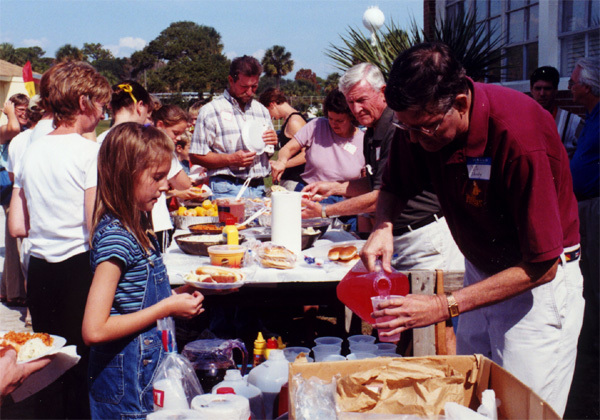 Later on that evening, the family gathered for a potluck, where I had my first taste of corn casserole loaded down with more cheese than vegetables. There were other foreign and delicious foods, like macaroni and cheese cooked with eggs and cut into squares, and a sweet, dense cake, studded with apples. This cake, dubbed "Nama's Apple Cake," was named after my great-, great-grandmother Sarah Edith Cooper Hendry, who was called Nama by my grandfather. These dishes were old ones, dishes my grandparents would use as a springboard to launch into a 20 minute story about our heritage. (It would not be an exaggeration to say that my family is a bunch of food fanatics.)

After the reunion, my uncle gathered up several of the recipes and published them on his website, making it (likely) one of the first food blogs, albeit one read only by my family members.

More than any other American cuisine, Southern food is rooted in memory and heritage. We cook our grandmother’s green beans at Thanksgiving and smoke our grand-uncle’s pork shoulder in the summer. There is a culture of the passing down of recipes from generation to generation, and with each iteration tweaks are made and dishes evolve — but not too much.

These recipes are inherited through teaching, memory and, often, recipe cards. These lined three-by-fives are treasure, and completely worth saving as American cooking habits continue to shift more and more towards Blue Apron and further away from our roots. 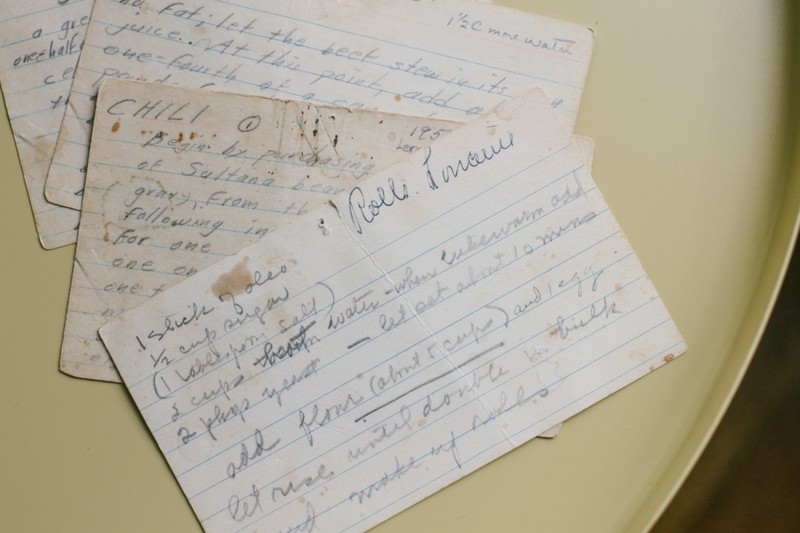 In this, our new series called Saving Southern Recipes, I'll explore the deep heritage of Southern cooking through the lens of these passed-down recipes. I will cook and document old family recipes, oftentimes recorded in scrapbooks and recipe cards, and write about the process, one week at a time. And while I've got a small collection of carefully saved recipes of my own, I'll need your help to keep the project going. If you have a stack of beloved recipe cards sitting in a kitchen cabinet, I'd love to see them and hear your stories about each and every one. We want our "saved" Southern recipes to be the recipes from all of our families over many generations.

This week, I dug up the recipe for Nama's Apple Cake. While I had originally believed I had a physical recipe card for the cake, it seemed to have been lost somewhere in my multiple moves across the county. My recipe cards for Grandpa Loren's chili and Rolls Lorraine sit alone in my card collection. Luckily, the cake recipe already sits safely on my uncle's website, courtesy of Cousin Leland (my great-uncle). 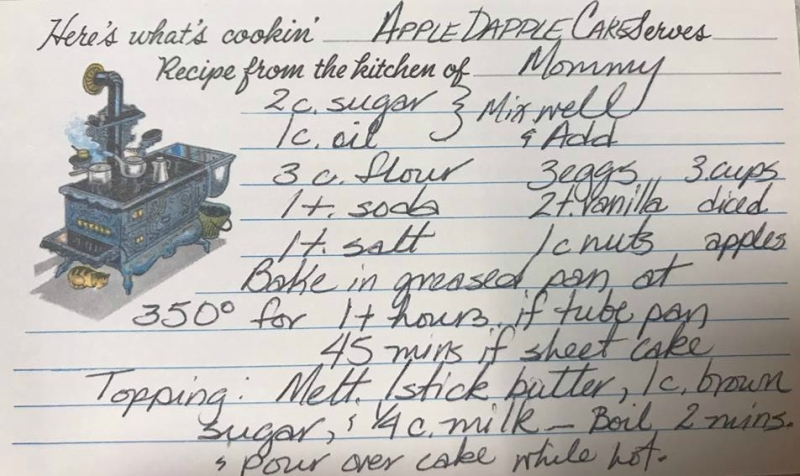 (Update: After sharing this story on social media, one of my relatives pulled out his recipe card for this very cake (left). His version varies slightly from what is written below, but is certainly worth trying as well.)

Nama's apple cake is a simple, oil-based dessert originally baked in a tube pan. Nama's apple cake is economical and hearty, calling for mainly pantry ingredients and a variable amount of eggs and oil. I'm not sure in what year the recipe originated, but, if I had to guess, it would have been sometime in the 1940s or 1950s; there is margarine in the caramel sauce, which was then booming in popularity.

The cake comes together quickly: A dry mix of flour, sugar, baking soda and cinnamon mix with a thick goop of Wesson oil (I used canola) and eggs. "The mixture will be real stiff," wrote Leland, and he wasn't wrong. Even after adding apples and chopped pecans, the batter looked far more akin to an oily cookie dough than any cake I have ever made. I pressed it firmly into a buttered 9- by 13-inch baking pan and let it slowly bake at 350 degrees. (The copy of the recipe I found didn't specify an oven temperature, but my method worked just fine.)  About 30 minutes before it was supposed to come out of the oven, the cake was golden brown and firm, so I pulled it early.

The final touch is a light caramel sauce made from brown sugar, milk and margarine. I swapped butter for the margarine (perhaps that move was sacrilege) and let it burble away for a few minutes before pouring it hot over the cake. Much of the sauce gradually seeps down into the cake, adding even more moisture, fat and sweetness. Leland wrote that the cake should be served cold, but I liked it better after it had just cooled enough that I didn't burn myself on the side of the pan. Eaten warm, the cake is almost pudding-like and is a big bowl of fall-scented comfort on a crisp, cool afternoon. 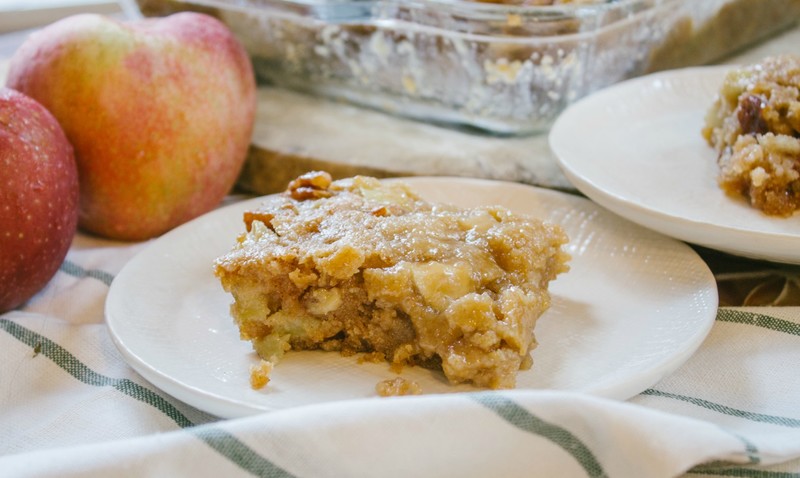 Instructions
To make the cake: Heat the oven to 350 degrees. Generously butter a 9- by 13-inch baking dish.

In a large bowl, whisk together the flour, sugar, baking soda, cinnamon and salt.

In a medium bowl, whisk together the vegetable oil, eggs and vanilla. Using a stiff spatula or wooden spoon, stir the oil mixture into the flour mixture. It will be "real stiff." Mix in the apples and nuts. Press the mixture into the prepared baking dish and smooth out the top into an even layer.

Bake until golden brown and a toothpick inserted into the center comes out clean, 40 to 45 minutes. Let cool while preparing the sauce.

To make the sauce: In a small saucepan, combine the brown sugar, butter and milk. Place over medium-high heat to melt the butter. Once the butter has melted, bring the mixture to a boil and reduce the heat to medium. Continue to boil, stirring constantly, until the sauce just begins to thicken, 2 to 3 minutes. Pour the hot sauce over the cake, spreading it evenly across the top.